A.V Dicey gives an introduction to the doctrine of Parliamentary sovereignty as, “the principle of Parliamentary sovereignty means neither more nor less than this, namely, that Parliament thus defined has, under the English constitution, the right to make or unmake any law whatever; and, further, that no person or body is recognised by the law of England as having the right to override or set aside the legislation of Parliament’. However, there are many discussions as to whether the UK joining with the European Union and adherence to the Human Rights Act 1998 renders sovereignty irrelevant.

Turn in your highest-quality paper
Get a qualified writer to help you with
“ Parliamentary sovereignty ”
Get high-quality paper
NEW! AI matching with writer

It will be argued that although following these rules may appear to be contradictory to sovereignty, co-operation is entirely voluntary, necessary, and there are many examples as to why sovereignty is not irrelevant, nor archaic. Firstly, Parliamentary sovereignty is not a constitutional relic. It may seem to be the, as part of the UK constitution continues to rely on extremely early Acts such as The Magna Carta or the Bill of Rights Act , however, these statutes continue to remain as they set out important constitutional principles.

Even since 1215, it has been recognised that it is important to limit the power of the monarch, and transfer powers to parliament, in interest of balance, and the separation of powers. Up until present day, supporting Dicey’s summary above, UK courts cannot strike down an Act of Parliament, this is unlike many Supreme Courts in other countries, for example the USA, who are bound to reject legislation which contradicts the written constitutional rights.

For example in the case of Mortensen v. Peters , it notes that in the event of a contradiction between international law and Act of Parliament, courts within the UK are bound to apply the UK legislation, and discount the international law.

There is a challenge posed to parliamentary sovereignty by EU law, as in 1973 the UK joined the European Union. Member states must not be permitted to deviate from EU rules common to all, thus overriding Parliamentary sovereignty. This seems to conflict with Dicey’s view of sovereignty. The European Communities Act 1972 tries to establish the relationship between domestic law and EU law ; ‘Any enactment passed or to be passed… shall be construed and have effect subject to the foregoing provisions of this section’. This provides a problem with sovereignty, as it means that the UK will have to adhere to the EU court, rather than our own supreme court. Parliament in the future may no longer be considered as sovereign, as they may no longer be free to make or unmake law. However, courts have tried to find a middle ground with EU and Parliamentary sovereignty, in the case of Macarthys .

Lord Denning stats that if Parliament every clearly and deliberately passes an act which is inconsistent with EU law, ‘the duty of our courts to follow the statute of our Parliament’. This shows that Parliament has retained some of its independence, and only acts in accord with EU voluntarily, and because the UK agrees with the EU laws. Leading on from the UK’s voluntary cooperation with the EU laws, is the case of Factortame (No. 2) . Justification for the decision in Factortame was offered by Lord Bridge, which emphasised that; “whatever limitation of its sovereignty Parliament accepted when it enacted the European Communities Act 1972 was entirely voluntary”; the ECA 1972 was the domestic source of the supremacy of EU law; and there was nothing novel about this decision.

Lord Bridges’ speech traces the source of the limit of legislative power to the ECA 1972, suggesting that if Parliament wishes to create a new Act, contradicting EU law, it need only expressly state in the new statute that it is to take place regardless of the ECA 1972. This, supported by Denning’s Obiter in Macarthys , brings us in a compete circle, to Dicey’s view; ‘that no person or body is recognised by the law of England as having the right to override or set aside the legislation of Parliament’, as it suggests that the UK can decide not to follow EU law, therefore Parliamentary sovereignty is not obsolete or irrelevant.

Parliamentary sovereignty. (2016, May 27). Retrieved from https://studymoose.com/parliamentary-sovereignty-essay 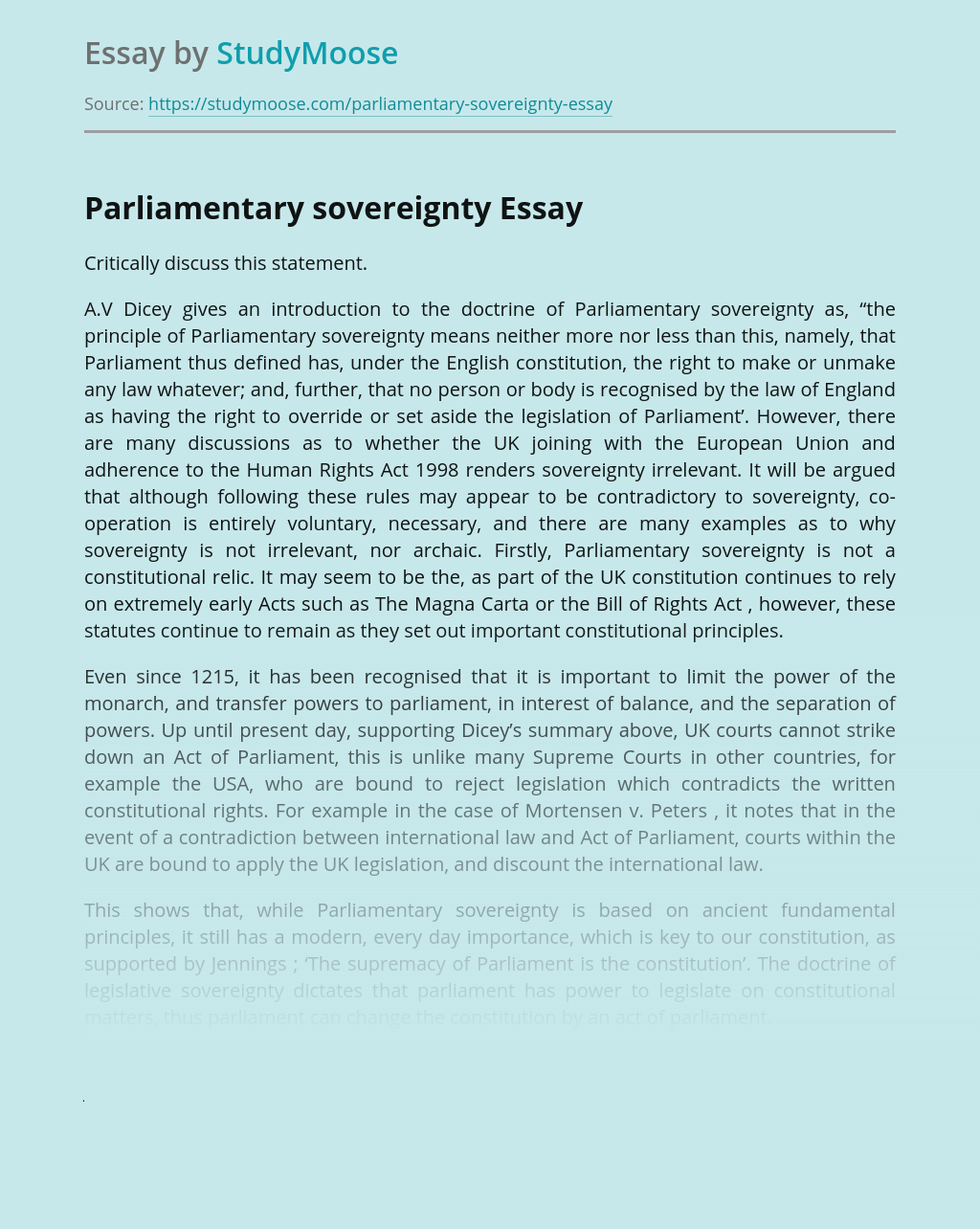 Turn in your highest-quality paper
Get a qualified writer to help you with
“ Parliamentary sovereignty ”
Get high-quality paper
Helping students since 2015
Stay Safe, Stay Original