Albert Bandura explains vicarious learning also known as observational learning as the function of observing and imitating behavior from other people. It involves the process of learning what other s are doing and impacting the behavior in our lives through observation. He believes that observational learning is most important during childhood whereby children look up to their parents and guardians as their role models. Bandura argues that vicarious learning allows people to learn without necessarily changing their behavior.

Don't use plagiarized sources. Get your custom essay on
“ Parenting and Juvenile Delinquency ”
Get custom paper
NEW! smart matching with writer

Vicarious learning is related to deviant behavior in children because people who commit crimes relate them to early exposure either directly or indirectly. For example, people who are exposed to pornography material at an early age, eventually become child molesters. Some research studies show that pornography is a tool that is used by child molesters to persuade children to perform the abuse.

(Grusec, Hastings, 2006). Baumrind’s typology of parenting styles Parenting is an activity that includes behavior that works either individually or together to influence the outcomes of children’s behaviors.

Baumrind believes that the typology of parenting style doe not include deviant parenting but it involves the issue of control. All parents differ in mechanisms through which they control their children or socialize with them, but the main role of parenthood is to control, teach or influence their children.

The authoritative parenting style is the mot effective because it involves parents who are both demanding and responsive. This type of parenting involves disciplinary methods that are both tough and supportive; hence they have a positive effect on the children. Parents who aim at imparting standards of good conduct and self regulation are more effective in their families. (Siegel, & Welsh, 2004). The uninvolved parenting style is the least effective parenting style because it results to reject and neglect. These parents lack both responsiveness and demandingness and therefore do not communicate properly with their children.

Children who are raised by uninvolved parents feel neglected and rejected and thus are more likely to develop delinquent behavior. Unraveling Juvenile delinquency study by Sheldon and Eleanor This study was conducted in 1940 by Sheldon Glueck and his wife. This study was aimed at examining criminal behavior and they argued that potential deviants could be identified as early as six years of age. They aimed at identifying the causes of crime and delinquency. Sheldon and Eleanor conducted investigations through interviewing family members, social workers, employers, schoolteachers and neighbors.

They identified the role played by family structures and discipline in shaping the antisocial aggressive behaviors and delinquency in adolescents and adulthood. During their study the Gluecks compared delinquent and nondelinquent males from Italian, English and Irish families living in poor urban areas. Their findings were that delinquent behavior is developed as a result of early childhood experiences, family structure and discipline. (Glueck, S. & Glueck E. 1951). The findings of the Gluecks are valid because delinquent behavior develops early before children reach the age of adolescence. Delinquent signs can be identified between the ages of three and six and almost before they reach the age of eleven. 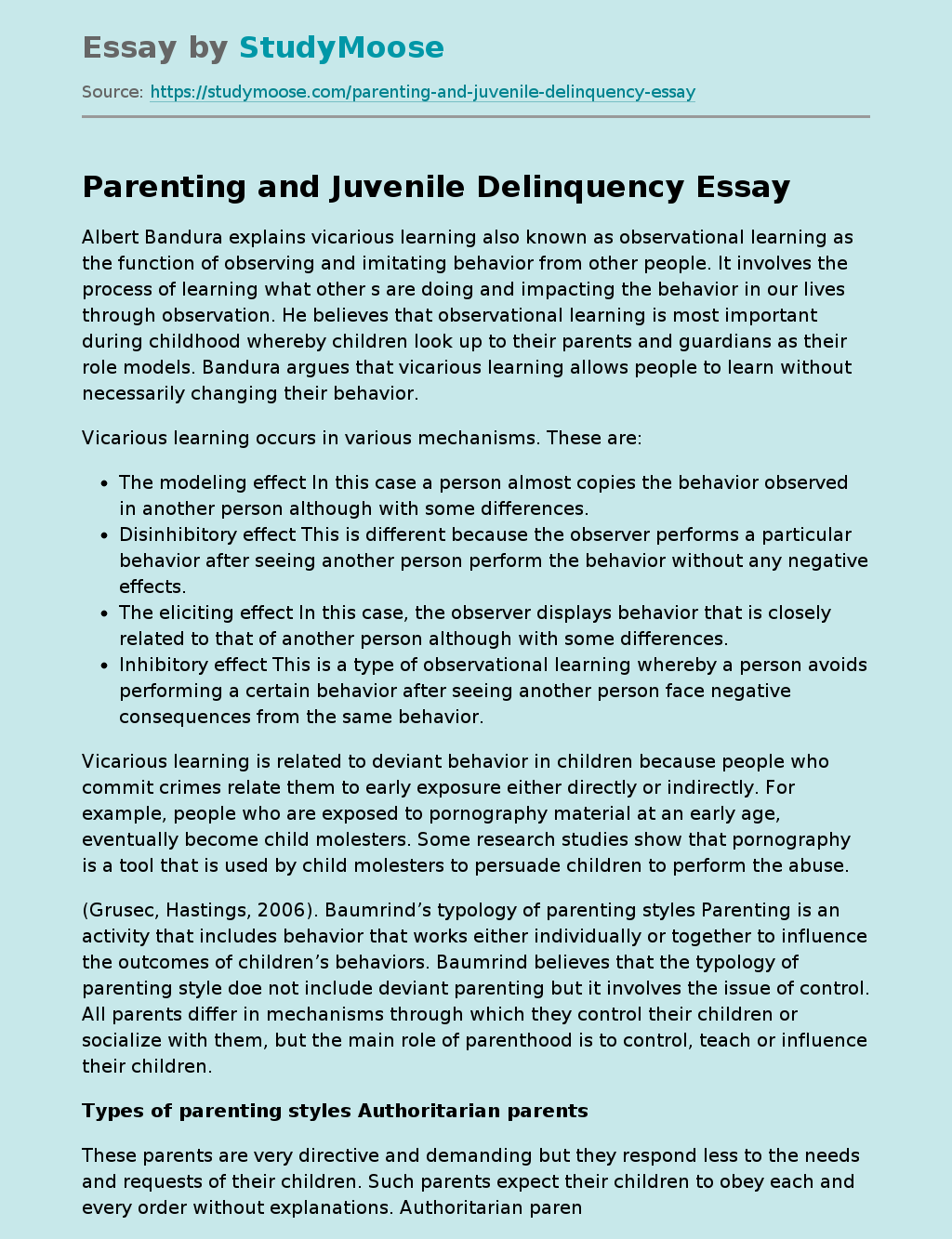