Many young people are depressed, tired and in physical pain, when they are in school. This is due to a fear of not being able to live up to their parents requirements. The person who is sitting next to you can handle it better than you, and will your parents be disappointed when they see your grade book. The increasing pressure of expectations on young people in school now seems to have consequences for their health. The school can be dangerous, because many young people can’t handle their parent’s requirements.

Don't use plagiarized sources.
Get Your Custom Essay on Parental Pressure Just from $13,9/Page

Today many parents have high expectations to their children. Not every child can handle a lot of pressure. Parents have no idea how something they say can affect their children, especially when they say that they must come home with high grades and if they don’t they have to study more than a child can handle. Parental pressure leads to physical exhaustion due to late night studying to produce a good grade that’s why many young people choose to cheat because they don’t get enough sleep and they are depressed.

In a survey done by Donald McCabe says that over 2100 student on over 21 campuses attempted serious cheating on tests and assignments. It is some of the consequences of parents being too strict, and because many young people wants the need to succeed and that’s why they choose to cheat. In an article by Ankita Chaudhuri says that a young boy from Kolkata in India has committed suicide, and it has brought back the focus on how parent’s pressure can affect the children. In the times of India all the psychologists talked and they all agreed that, when children fail to their parents expectations all they needed were some solace but their parents refused to sympathize with them, and it is here they feel trapped of emotions that they cannot handle, that’s why many young people in India choose to commit suicide. Suicides and attempted suicides by young people is on the rise, says sources in India times. In 2008 in Bengal there were 940 suicides by students, and Bengal is they capital of the country where there is a lot suicide, and after Bengal comes Maharashtra with 757 suicides.

One example is the 16 year old Sushmita Roy, she failed the first position and her mother got so angry that she publicly insulted Sushmita from all social gatherings. She goes only out to school or to attend tuitions. That’s why she is mental and emotional wreck, because she is forced by her parents to stop music class and all social activities. Another example is the 15 year old Anamika who stays trapped in her room all day long, she doesn’t feel good, she is depressed and very often she refuse to eat, she had severe stomach pain and high fever, and then she was hospitalized. Her parents had no time for her, and they girl was left all day long with a maid. Her father was very strict and he demands a report card that she wasn’t able to do, because she was ill and depressed.

These children called battered kids, they bear mental injuries and these children work like robots they always study even in the nights. In the book which called “Dead Poets Society” are Neil and Todd’s parents very strict and they have very high expectations to their children. Neil has a dream he wants to act but his father wants him to be a doctor and that’s why his father wanted him to go on Welton Academy which is a private school. Neil loved acting and he decided that he wants to act, and he got the role in the “A Midsummer Night’s Dream”, and Neil’s father showed up to the play, after the play Neil’s father took him home and he told him that he is going to withdrawing him from the Welton Academy, Neil didn’t want it, because of his friends and because he could not act anymore, that’s why Neil decided suicide.

And the other boy in the “Dead Poets Society” Todd, he didn’t like his parents because he wasn’t as smart as his brother and that’s why his parents loved his big brother more than Todd, and Todd got very upset about it, because everything was about his brother. In the end many young people can’t handle to much parental pressure, because it is very important that young people also have a social life. Too much parental pressure can parents risk to lose their children. As we can see on these different articles, that your child can risk bad health and they can get very ill. So parents should be more understandable and helpful, because as you can see many young people commits suicide.

I have heard that too many young people are very pressed of being student. You can read everywhere in articles and in television that many parents are to strict and they have high expectations, because they want their children to get a great education as themselves but not all children want to become like their parents, they need to decide what they want and not what their parents want them to be. Young people are too stressed in school which I understand because first of all they don’t get enough sleep and another thing is they just don’t want their parents to yell at them that’s why they use a lot of time to study. I thought it would help with some suggestions that would help young people, so here are some suggestions.

1. You have to get enough sleep.

It is very important that you get some sleep, because if you are not getting some rest, then you can’t concentrate in school and you can’t keep up at school. You can’t do homework late at night because you are tired at nights and all you have to do is sleep, it is that simple. You have to do your homework after school because you are still fresh at that time.

2. Talk with someone close to you.

If you are very stressed and depressed about the school and the parental pressure, then you have to talk with someone about it, if you feel that it is too much and you can’t handle it then you need help from someone, because if you not getting any help then it can end very bad, like many other young people which had commits suicide.

3. Do your homework on time

When you get an assignment you have to do it as soon as possible and not wait to the last day, it’s not a good idea because you get stressed and your assignment will not be good as you thought it would. 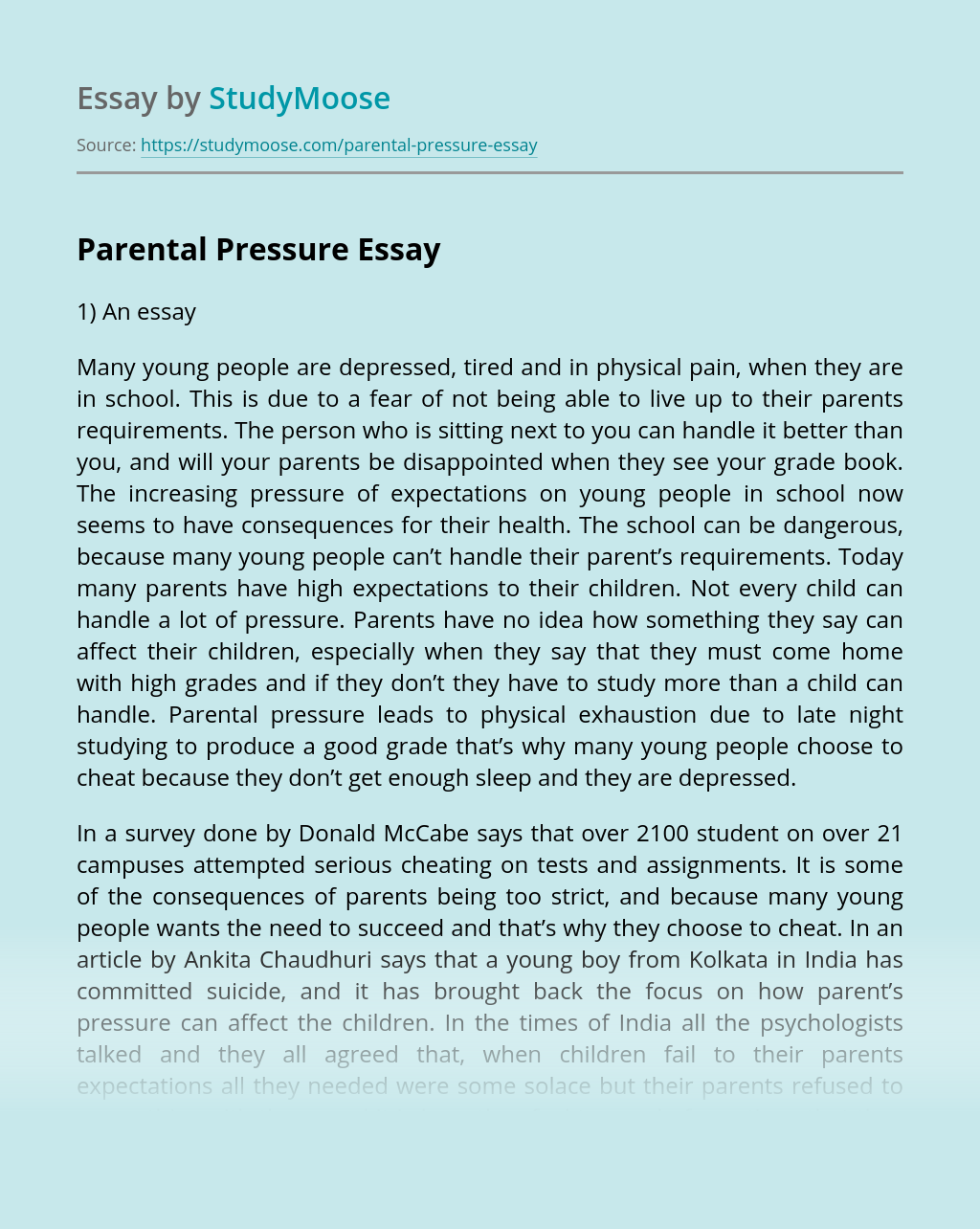 The paper is based on the argument of whether euthanasia should be legalized or not. Not many people understand what euthanasia is. Some do not even know that a human can ask for this option when you are close to death. It explains what euthanasia is and shows the main points of each side’s argument....

The act of suicide is a common issue some contemplate when facing hardships and troubles in life. These acts and thoughts are caused by issues of death, heartbreak, and depression which some may not be able to cope with. As in many plays from the era of Elizabethan England, the theme of suicide is abundant...

Medicare is currently the primary healthcare insurer of the elderly in the United States of America. Medicare, which is funded by the federal government, paid providers $444 billion dollars in 2008 for healthcare expenses (National Healthcare and Medicare Spending, 2010). Due to enormous expenses, Medicare implemented changes during 2008 to improve patient safety and reduce...

Death of a Salesman

Betrayal and abandonment are themes that many have encountered within their lives; but nobody can perhaps relate as much to these themes as Willy Loman, the main character in Death of a Salesman, by Arthur Miller. This play encompasses the life of Willy Loman, albeit not in any particular order when reviewing his younger years....

Summary In Dr. H. Norman Wrights book “The Complete Guide to Crisis & Trauma Counseling: What to Do and Say when it Matters Most”, which was published in 2011 focuses on how to counsel those in a crisis situation. The book begins by Dr. Wright discussing his personal life story of dealing with loss, crisis,...