The article Parental Influence on Children’s Socialization to Gender Roles by Susan D. Witt is about gender socialization and the primary role parent’s play. She states that children learn at an early age what it means to be a boy or girl. Witt states that it is different for a child to grow and not experience some sort of gender bias. The basic expectation during a child’s primary development is socialization that comes about through parents influence. Witt states that a child’s earliest exposure to what it means to be male or female comes from parents.

An earliest exposure would be a parent dressing the child in gender specific colors such as pink for girls and blue for boys. Another early exposure to gender socialization would be gender differentiated toys such as dolls for girls and trucks for boys.

Children internalize parental messages regarding gender at an early age (Witt, Susan D. 1997). In Witt’s article she states that one study found that children at age two and a half use gender stereotypes in negotiating their world.

In a 1992 article by Steinbacher and Holmes it stated that most parents prefer male children throughout the world ad that these people are most likely to use technology for selecting sex of a child this is defiantly a form of gender bias. Parents often encourage their children, both sons and daughters to participate in gender type activities (Witt, Susan D. 1997), such as cooking for girls or playing with trucks for boys. Both parental sex typing is shown in children’s toy preferences and both mother and father have been found to reinforce stereotypes however, fathers have been shown to reinforce these stereotypes more.

Children’s bedrooms have shown they are more so than not gender specific. Such as, girls rooms having more pink, dolls and manipulative toys and boys rooms having more blue, tools or sports related themes (Witt, Susan D. 1997). Research has shown that a parent’s influence is a primary socialization tool in a child’s development however, Some studies have suggested that parents as a gender socialization factor have little impact on a child’s sex role development (Witt, Susan D. 1997).

Studies have shown that parents treat sons and daughters differently and that this plays a role into adult relationships. Witt states that parental attributes towards their children have a strong impact on their development and self-esteem. Sex role stereotypes are established in early childhood. It is shown that messages about appropriate behavior are based on gender, there are some benefits to strict gender stereotypes such as providing a sense of security and to facilitate decision making (Witt, Susan D. 1997).

Witt states a negative factor to gender stereotyping and socialization would be limiting opportunities for both boys and girls based on what is seen to be gender appropriate in society. She also states that androgynous (neutral) individuals have been found to have higher self-esteem and higher levels of identity achievement and more flexibility in dating and relationships. Witt also states that children with parents who have more neutral values tend to be more knowledgeable about non sex type objects and occupations.

Families who look at situations with less gender specific roles have been found to score highest in parental warmth and support (Witt, Susan D. 1997). Because of the strong influence of parents regarding gender role socialization those which were to be gender fair and encourage the best in both their sons and/or daughters would do well to adapt to genderless role orientation and encourage the same in their children (Witt, Susan D, 1997). Witt’s article shows her view and others of gender socialization and how it plays a role in a child’s upbringing. 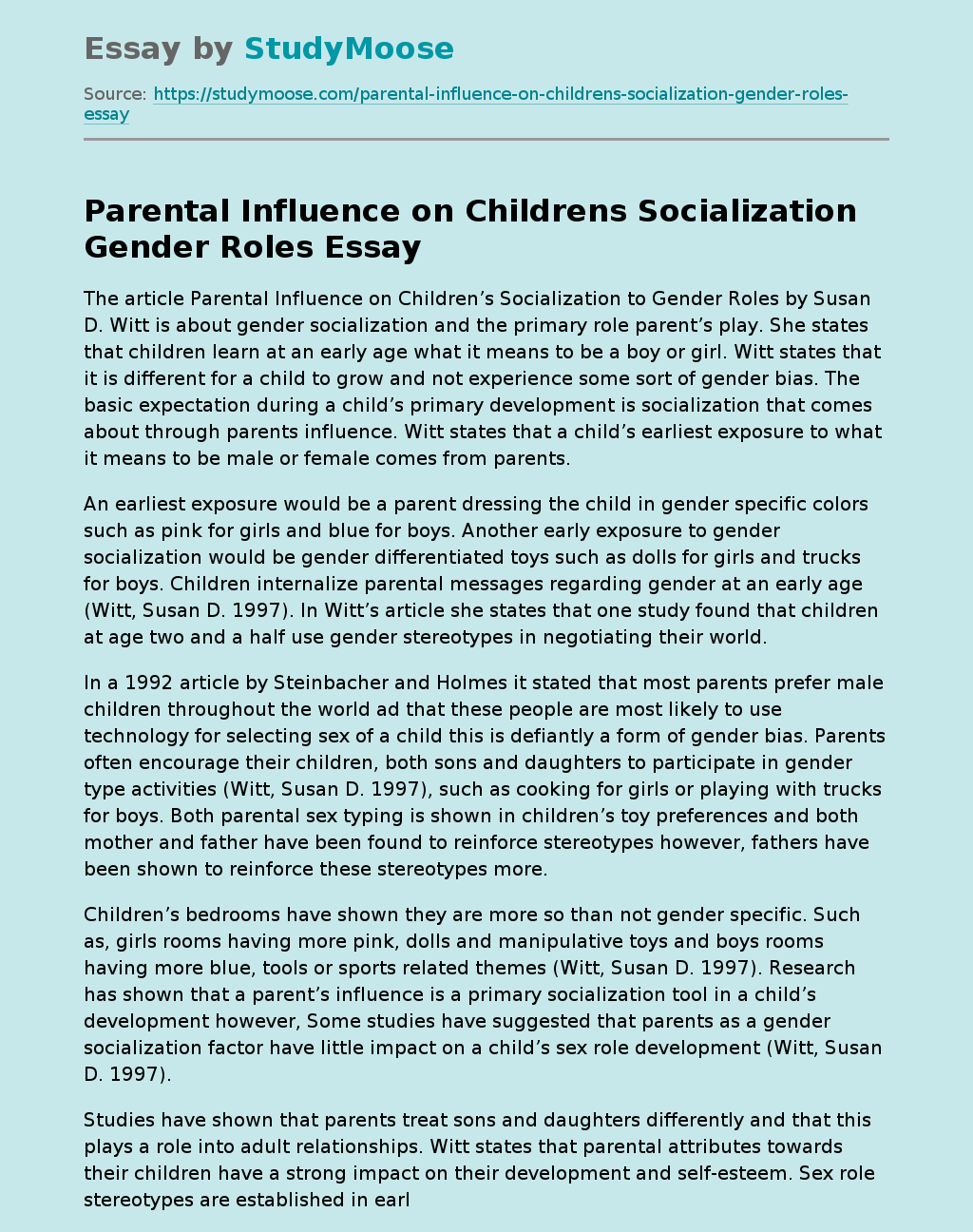