Quentin and Margo meet at a random night when Margo sneaks into Quentin’s room. Since then, Quentin follows Margo on her adventurous mission for revenge of her boy friend cheating. Quentin and Margo get closer which makes Quentin to feel like he is going to be close friends with her since that day. However, Margo goes missing the next day, leaving only few clues for Quentin to search for herself. Quentin and his friends, Ben, Radar, and Lacey, find few clues at Margo’s room when her parents go away.

Don't use plagiarized sources. Get your custom essay on
“ Paper Towns By John Green ”
Get custom paper
NEW! smart matching with writer

At her room, they find Walt Whitman’s book, Leaves of Grass, and find few quotes that are highlighted. Quentin then finds a location clue at his house and head to the location in search of Margo. He finds maps that are connected with holes from the pins. He later finds out that she is at Algoe, New York, and heads to Algoe with his friends on a road trip.

After a road trip, Quentin and his friends arrive at Algoe, New York where Margo is. They see Margo writing down stuffs in her black notebook. Margo is surprised to see that Quentin was able to find her but she soon recognizes their effort and starts to explain about herself.

1) “…maybe she loved mysteries so much that she became one.” (Page.8) This quote is important because it’s foreshadowing Margo’s live later in the book. Margo disappeared after her adventurous night with Quentin, only left a few hints for him to look for her.

She becomes a mystery for everyone because no one knows where she is. However, Quentin and his friends later found her in Algoe. Margo being different from others is represented with her mysteriousness and odd perception.

2) “It’s a paper town. I mean look at it, Q: look at all those cul-de-sacs, those streets that turn in on themselves, all the houses that were built to fall apart.” (Page. 57)

As Quentin and Margo are on top of the Suntrust Building, Margo is explaining her point of view of the city where she has been living for eighteen years. By comparing Orlando to paper town. The way that she talks about the cul-de-sacs expresses her feeling of being trapped because the roads turn in on themselves not leaving any open places. Also, the paper town relates to the houses where everything is frail including the people who live there because they only care about things that concern them blocking out everything else.

3) “I looked down and thought about how I was made of paper. I was the flimsy-foldable person, not everyone else.” (Green 293).

Margo explains to Quentin her real thoughts on paper town and paper girl reflecting on her previous statement at the Suntrust Building. Margo begins to understand herself better after having isolated herself by running away. Margo describing herself as “flimsy-foldable” refers to her dual life where everyone in school perceives her differently. She is viewed as the leader and the popular fashionable person admired by many of her fellow classmates. However, at home, there is a side that no one is aware of regarding Margo such as the record collection she owns. Regarding this fact, Margo can easily change herself to a different person just like paper changes its shape when it’s folded. Therefore, Margo herself sees and realizes who she really is through comparing herself to paper.

Quentin take his friends and family for granted, thing almost of his own wants and selfish. However, he is also funny and intelligent and has a good heart. In Quentin I found a character I was particularly able to relate in one way, his expectations of his best friend Ben. For pretty much throughout the book, Quentin constantly wants Ben to change. He wants him to stop being so crass, to stop using the word “honeybunny”, to stop being obsessed with finding a date to take to their prom and to stop being too busy or too tired when Quentin wants to talk again about Margo or play Resurrection. Basically, Quentin wants Ben to be exactly like him. He never truly accepts Ben for who he is. Like what Radar tells him “You know your problem, Quentin? You keep expecting people not to be themselves.

I mean, I could hate you for being massively unpunctual and for never being interested in anything other than Margo Roth Spiegelman, and for, like, never asking me about how it’s going with my girlfriend – but I don’t give a shit, man, because you’re you….You’re funny and you’re smart, and you may show up late, but you always show up eventually.” (Page. 194). Radar then goes on to tell Quentin “Just saying: stop thinking Ben should be you, and he needs to stop thinking you should be him.” (Page. 195). Reading Radar’s speech helped me to realize I have the same problem with Quentin.

I want people not to be themselves. I want them to be nicer, happier, friendlier, less self-involved, more sincere, more understanding, more enthusiastic, more interest in the thing I’m interested in and a whole of other things. I want them to be what I want them to be. But I don’t just do this with people. I do it with everything. I constantly crave everything in my life to be better, to be more exciting, to be more meaningful than it really is. I think this is because I can’t help but imagine all the awesome and amazing possibilities of what someone or something could be.

In another book of John Green, Looking for Alaska, Alaska mysteriously goes missing, just like Margo. However, in the real world, generally, there are quite a few teenagers who run away from home because they are misunderstood or they feel the need to just get away from the stress, which was the case with Margo.

If I were to lead a seminar discussion on Paper Towns by John Green, I would ask “Since Margo compared herself to paper, who is the real her? Does she feel comfortable for not being who she really is? Is that mean Quentin been liking the “paper” Margo all the time?” 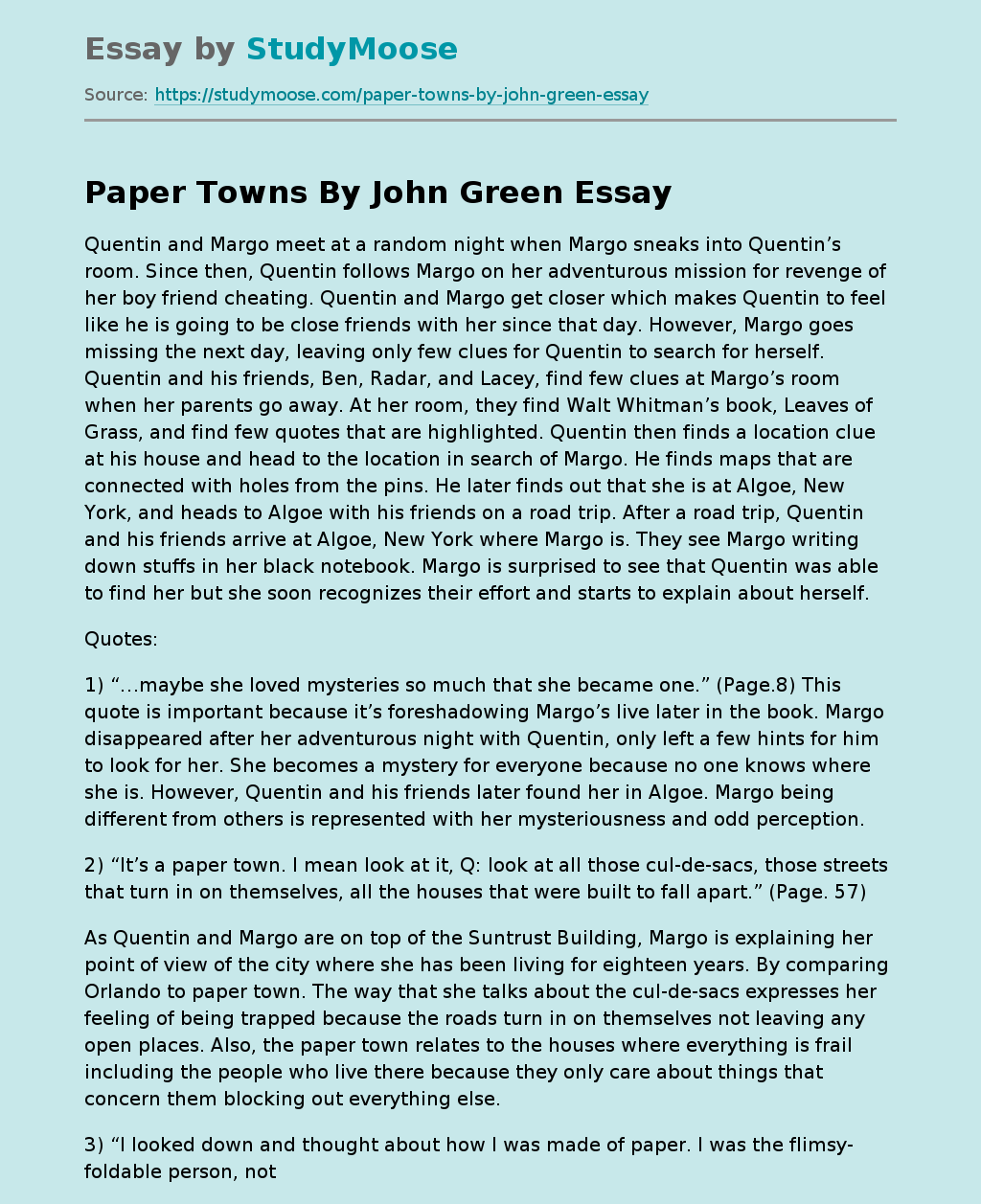