Paper about of Video Or Computer Games Have Positive Effects

Video gaming is clearly a popular form of entertainment, with video gamers spending many hours per day in front of their screens, Due to their widespread use, scientists have researched how video games affect the brain and behaviour? Are these effects positive or negative?

Recent studies have shown that video games are harmful to the brain in the long term, in 2016, video game sales worldwide reached 24.5 billion games, up from the previous year (2015), at 23.2 billion games. US statistics show that 72 percent of video games in the United States are used by people over the age of 18.

Don't use plagiarized sources. Get your custom essay on
“ Paper about of Video Or Computer Games Have Positive Effects ”
Get custom paper
NEW! smart matching with writer

There are a range of concerns about the extent and impact of these games, including on violence, brain influence and other physical activities. According to a new study in which a summary of 116 previous video game studies was compiled showing that the use of video games regularly affects the brain, the effect here is not limited to brain functions, but the structure of the work of neurons in the brain.

The results of the latest study were published in the journal Frontiers in Human Neuroscience, a neuroscientist, which finds confirmed doubts and assumptions about the potential impact of video games on the brain.

Does Playing Video Or Computer Games Have Positive Effects On Brain And Behaviour?

In addition, dysfunctional family structures are thought to constitute an important risk factor for internet and on-line game addiction. Tragically, several horrific cases of family collapse due to internet addiction have been reported in Taiwan and Korea. For example, a mother with an on-line gambling addiction throttled her two-year old son who had annoyed her by asking for a meal. Similarly, a thirteen year-old son beat his mother to death because she accused him of spending too much time playing on-line games. Further, a couple who were immersed in an on-line game ignored their 30-month-old daughter to the point where she starved to death. We believe that there is strong evidence in support of the view that excessive internet use or game play is associated with adverse consequences on behaviour in some individuals. On the other hand, the researchers found that video games have a range of benefits: they improve focus, visual and neurological skills, and the skills of using fingers.

The results showed that video games, especially 3D, can improve memory, and that they can be used to do exercises that strengthen memory. This effect lasts for 6 months after training. This benefit is particularly beneficial to older persons.

In this study we will explain the relationship between video games and seizure.

In 1885, Gowers was the first described PPISs, with reference to a girl who had seizures when going into bright sunshine. In 1932, Radovici described eyelid myoclonias and absence seizures in response to eyelid closure while looking at bright light. And . Livingston described seizures in response to flickering on TV. Gastaut studied 35 patients who had seizures while watching TV. They distinguished patients who had seizures from those who had fainting episodes, and those who had frequent seizures likely to be coincidentally related to watching TV. In the remainder, they believed that some relation existed to watching TV, and they documented abnormalities on the patients’ EEGs. Pattern sensitivity in photosensitive subjects was first reported by Bickford and associates in 1953. Many of investigators consider the condition to be an extension of photosensitive epilepsy (Danesh- mend and Campbell, 1982; Dahlquist et al., 1983; De Marco and Ghersini, 1985; Hart, 1990; Cook and Hoskins, 1992) or, alternatively, a form of pattern- sensitive epilepsy (Jeavons et al., 1981; Harding, 1986; Maeda et al., 1990). Photosensitive epilepsy is a relatively rare condition with an incidence of 1 :4,000 of the general population (Jeavons and Har- ding, 1975; Harding, 1980), with onset usually be- tween the ages of 5 and 20 years, most commonly around puberty. It is characterized by a history of attacks precipitated by flickering and/or patterned stimuli; the most common precipitant (61%) is a TV set. However, sleep deprivation, stress, or other causes of lowered convulsive threshold may be in- volved (Dahlquist et al., 1983; Wong et al., 1983; De Marco and Ghersini 1985; Henchey and Gilmore, 1993).

one of the previous studies and has been reported since 1981, it is the Video game-related seizures. Rushton reported a case of so-called ‘Space Invader epilepsy’, A 17-year-old youth attended, having had one grand mal seizure, preceded by an aura of temporal lobe type, with dija vu and intense memory recall. He had also had two similar auras on separate occasions without seizure. The attacks and auras had occurred after he had played the game in question for 20-30 minutes. He was unusually fatigued on the day of the seizure, when he accompanied the patient to the amusement arcade, he found that for about 2 seconds at the end of the game, the screen (subtending about 25 degrees of the visual field) was filled with a multicoloured stroboscopic effect, flashing at about 15 Hz. The patient confirmed that it was this part of the game, and not the movement or destruction of the astro fighters that provoked the attack. There was no family history of epilepsy, but the patient did have a history of a single febrile convulsion as an infant in Romania. Examination was normal, and an EEG showed only a normal following response on conventional photic stimulation. Since avoiding space war arcades, the patient has had no further auras or attacks.

Video games epilepsy has similarities to photo- sensitive epilepsy. The most common precipitant is the domestic TV set (used as a computer monitor). The mean age of onset is around puberty, and age range of 4-17 years, except for one case of post- traumatic epilepsy and one case of drug withdrawal (both patients aged 32 years). However, the male/ female sex ratio is 4.7:l for video game epilepsy (Maeda et al., 1990) and I:1.7 for photosensitive epilepsy (Jeavons and Harding, 1975). We reviewed >600 patients with photosensitive epilepsy whom we had examined in the EEG labo- ratory (Jeavons et al., 1985) and identified those clinically reported to have had convulsions associ- ated with viewing video games.

The problem is that many people spend a long times on video games without knowing the negative impact.

Paper about of Video Or Computer Games Have Positive Effects. (2021, Dec 08). Retrieved from https://studymoose.com/paper-about-of-video-or-computer-games-have-positive-effects-essay 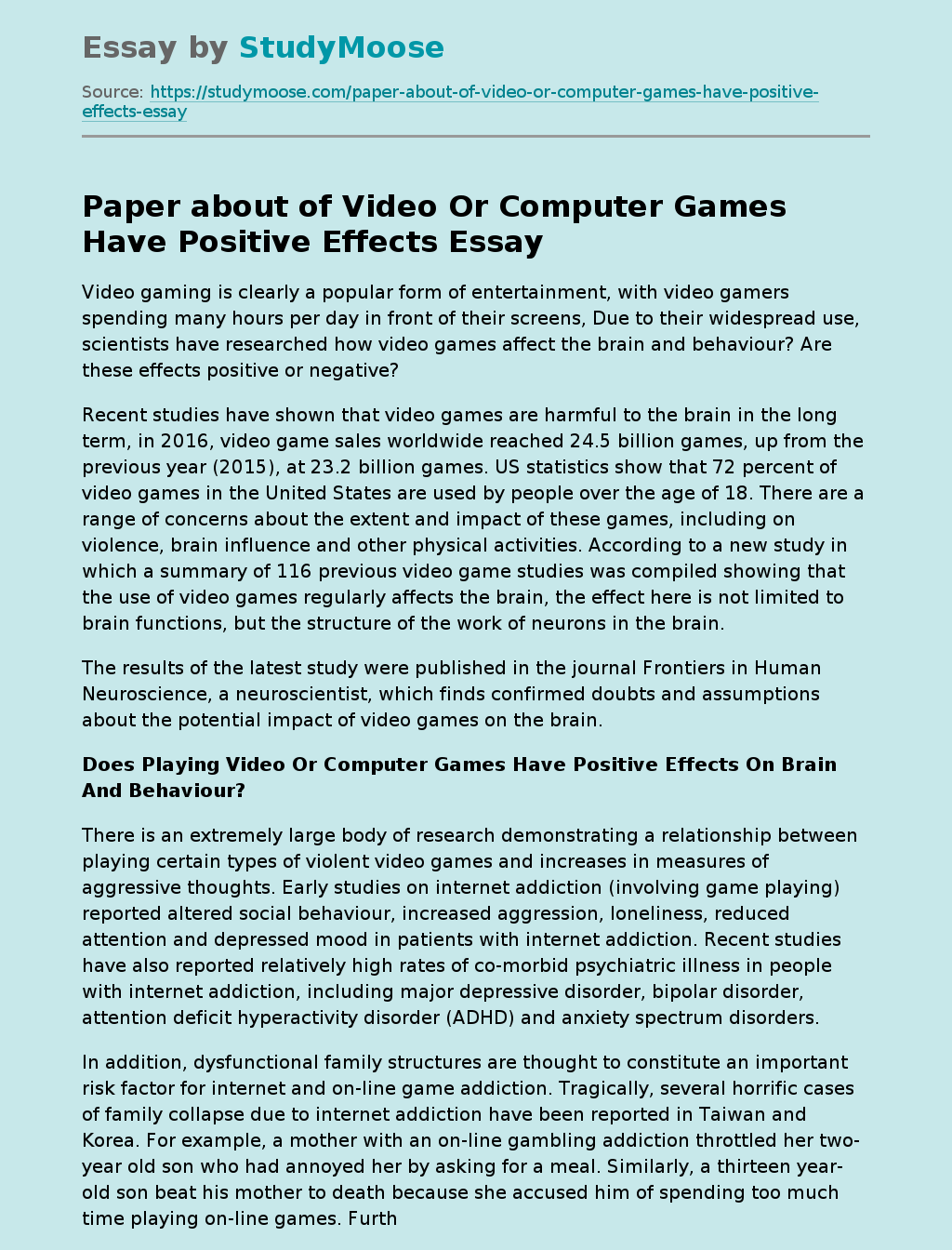