Pangloss and Martin in Candide

Candide was first published in seventeen fifty-nine by Voltaire within the novella three characters emerge not including Candide. The first of them being Pangloss who was Candide’s tutor and also a philosopher. Pangloss firmly believed that nothing could go wrong in any possible world. His extreme optimism stays with him throughout every situation he encounters through the novella. The next character emerges throughout the book is Martin who is quite the opposite of Pangloss he extreme pessimism leads him to believe that there’s absolutely no good in the world.

Don't use plagiarized sources. Get your custom essay on
“ Pangloss and Martin in Candide ”
Get custom paper
NEW! smart matching with writer

The final character that emerges in the book is a Turkish farmer who was all for realism which is essentially having a certain attitude according to every situation.

Pangloss appears and reappears in the story. When Candide sees Dr. Pangloss again he couldn’t recognize him “he met a beggar covered with sores; his eyes were lifeless, the tip of his nose had been eaten away.” (Voltaire, 24).

Voltaire goes on the describe an appalling and vivid of Pangloss when Candide encounters him again. Pangloss however doesn’t stop believing in his extreme optimism he doesn’t complain about the condition he’s in to Candide which to anyone else with any bit of rationality would’ve been eager to complain about and ask for help.

This example is also a way Voltaire goes on to criticize Pangloss since Pangloss believed that “that things cannot be otherwise: for, since everything was made for a purpose, everything is necessarily for the best purpose (Voltaire,18). To my understanding of the novel the description of the beggar Voltaire wrote is an attack on Pangloss’s philosophy since Pangloss was the beggar and he was in a state where there was anything but good. How can being in a state where you’re rotting away be for the best and be for the best purpose. Within the same encounter Candide takes Pangloss to Anabaptist James who helps cure Pangloss however ironically in the novel it states “Pangloss the philosopher stopped him by proving to him that the Lisbon harbor was formed expressly for the Anabaptist to drown in” (Voltaire, 28).

To my understanding this is another attack on Pangloss’s philosophy since Pangloss believe that every situation is for the best how could he let the Anabaptist cure him instead of letting him rot but when Candide wants to save the Anabaptist from drowning Pangloss stops him and goes on to explain to how it was meant to be. Voltaire criticizes Pangloss for the lack of rationality there is within his philosophy. Martin and Candide encountered each other when Candide was holding interviews for the most unfortunate man in his situation to take passage with him.

Candide chose Martin because his situation was the most unfortunate in his eyes. Martin was described as a good man who was robbed by his wife, beaten by his son and abandoned by his daughter. Martin’s philosophy of pessimism had its reasoning he no reason to believe there was any good in the world when he was betrayed by his own blood family. Voltaire seems to sympathize with Martin the most out of all of the character. However, Voltaire does show how being pessimistic all the time isn’t always the right option. By showing how there is people in the world you can trust with using the character Cacambo in the novel Martin states “ to imagine that a half-breed valet, with five or six million in his pocket, will go to find your mistress at the end of the world and bring her to you here in Venice” ( Voltaire, 94).

Basically, putting out there that there’s no way Cacambo can be trusted and he’ll definitely betray Candide. However, at the end when Candide was starting to lose his faith. Cacambo appears and tells Candide the whereabouts of Cunegonde he proves that Martin’s views can sometimes be wrong as well. The final character that emerges in Candide’s journey is a Turkish farmer his philosophy was realism which is basically acting to every situation accordingly instead of Pangloss’s absolute optimism and Martin’s extreme pessimism. The Turkish farmer states that “which my children and I cultivate. Our work keeps us free of three great evils: boredom, vice and poverty” (Voltaire, 119). In interpretation the Turkish farmer might not have much the farmer is very humble about what he doesn’t have and he’s happy with what he has. The ideas of all three characters has their own pros and cons.

Throughout the novel Voltaire seems to significantly side with Martin’s ideas and viewpoint. However personally the idea of realism seems to be the most viable since everything in life isn’t going to always go our way there’s no reason to optimistic when encountering a negative situation and there’s also no reason to continue being pessimistic in a positive situation. Furthermore, acting accordingly is the right attitude. When it comes to the idea theme of Enlightment and Modernity Candide definitely begins to think for himself in the conclusion of the book after encountering the farmer and his remarks. Throughout the novel Candide faced numerous hardships and obstacles and throughout that he seemed to learn more and acquire more knowledge.

Pangloss and Martin in Candide. (2021, Dec 02). Retrieved from http://studymoose.com/pangloss-and-martin-in-candide-essay 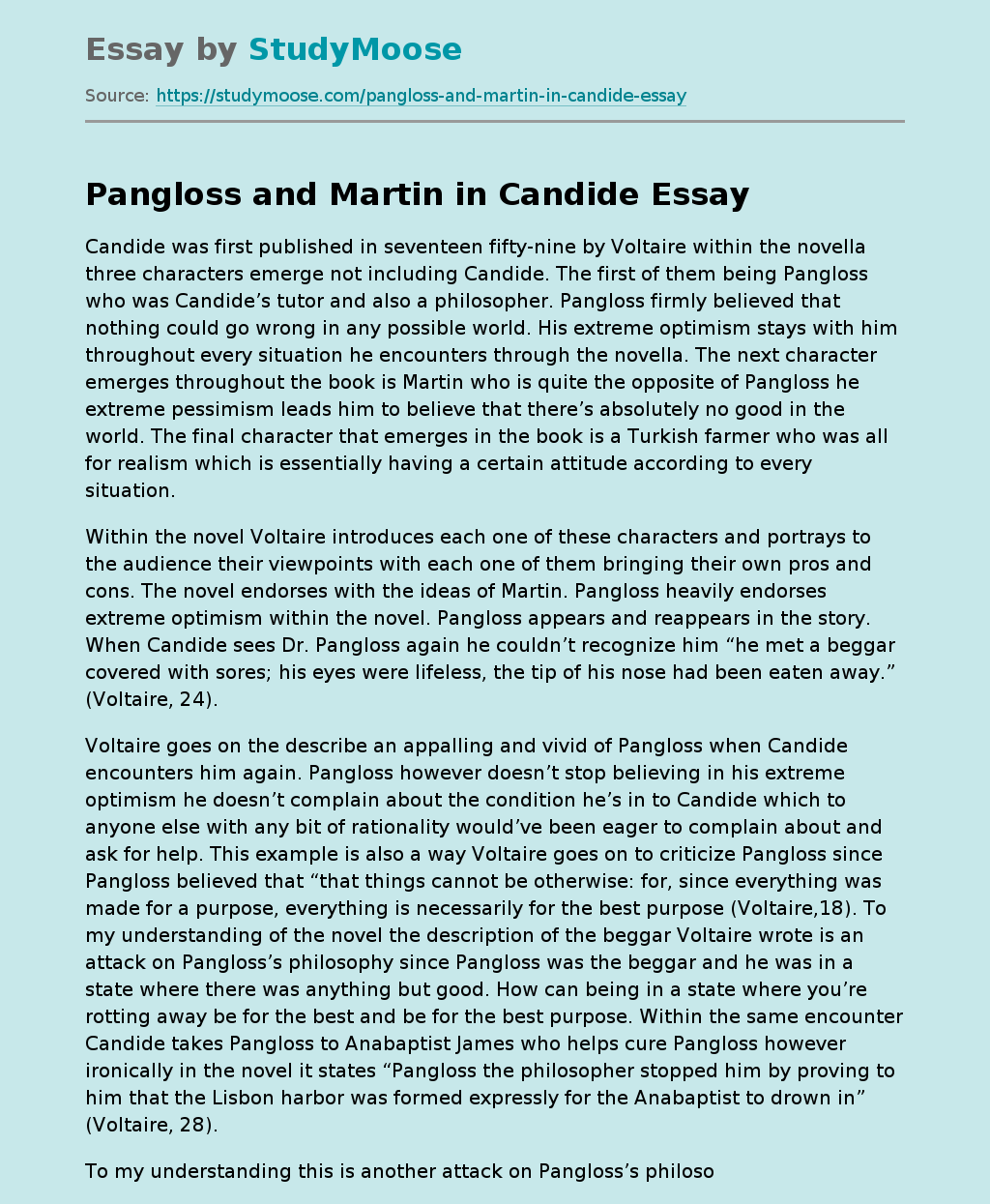