I began my preparation for this negotiation by reading the section in the textbook, The Pakistani Prunes, on page 498. Although this did not give me any additional information on the negotiation itself, it did make me aware of the main idea of this negotiation which was “work together in cooperation.” When I realized this negotiation was based on collaboration, I studied article 1.8, Implementing a Collaborative Strategy, more in depth. I took notes on points that I would be able to use during the negotiation.

Don't use plagiarized sources. Get your custom essay on
“ Pakistani Prunes ”
Get custom paper
NEW! smart matching with writer

Then I made a list of possible questions that I could ask at the very start of the negotiation and the specific steps to a collaboration. I also used an article by Robert A. Steinberg called, The Game of Negotiation. From this article, I used the tactic of, “Identifying with others in similar circumstances.” With this tactic, I made sure to get the other parties’ story and listen to their whole side before jumping to conclusions.

1.8 (Implementing a Collaborative Strategy)
This article stated the steps to the collaborative strategy.

I used this during the negation by following the steps to ensure that I was not rushing through the process or forgetting an important issue. During the “Generating Alternative Solutions” step of the negotiation, we “expanded the pie”, by both using the whole prune, and we also “bridged” by creating the idea that one person bids while the other pays the bidder themselves.

1.9 (Solving Joint Problems to Create and Claim Value)
In this article, I focused on the idea of ZOPA (zone of possible agreement).

I remembered not to pass my ZOPA but instead listen and learn everything about the other parties’ needs. With this strategy I was able to acquire the information that the other party only needed the outside of the prune while my organization only needed the pits. Another idea in this article that I used was to “Adopt a Persuasive Style.” Although I did not like the idea of being persuasive, I did remember to understand the other parties’ story. Instead of just listening and thinking of my next move, during this negotiation I focused on their needs and the key points to their research.

1.2 (Selecting a Strategy)
In this article, collaboration is described in more detail, and I used this by remembering to be open and accurate during the negotiation.

The negotiation was more integrative because Tray and I both focused on interests of both sides and not just our own. It was also integrated because we tried our best to “expand the pie.” We began the negotiation by explaining our reasoning for needing the prunes and each invested time in listening to the others interests. After this we quickly realized that we only needed part of the prune and not the whole prune. Identifying this early was the main strength during our negotiation because we were then able to figure out the logistics of the bidding process and the separation of the prunes. In article 1.8, it says not to rush the selecting solutions process. I used this to my advantage because I knew that if we were to rush the selection we would miss something important. With this reminder, we realized that we may not be the other people bidding on the prunes and decided that we should plan for this possibility. This was a big strength because we both agreed that in the occasion that someone else is bidding on the prunes and exceeded his $8 million limit, we would combine our investments to outbid the opponent. Together our limit was $13 million for this occurrence.

Another strength that I had during the negotiation was that Tray did not know all of my information. I informed him that if my organization had to pick, clean, and separate the prunes, that our machines would pulverize not only the pits but also pulp. I informed him that this would make the pulp of the prunes worthless and that he would need to pick, wash, and separate the pits and the pulp. He agreed that this was the best solution, which is why he is doing all the initial work to obtain the prunes and we are purchasing just the pits from him after. In a way, I was using misrepresentation that is illustrated in article 2.11, Negotiation Ethics. I was using partially true statement when I was informing him of the machines but it was in fact a misrepresentation of the true facts.

While we were writing the contract, we made the mistake of not thoroughly reading through our contract. Instead of having 65.2% on the contract we wrote 2.5% for the percentage of money I would be paying him for the pits. This meant I would have been paying significantly less money than we had initially negotiated. We both signed the contract while it had 2.5% on it and because of this I had the opportunity to take advantage of the mistake and only have to pay a small percentage of what Tray was going to have to pay. After looking over the contract, I felt that fixing the mistake was better in the long run because I would have a better relationship with him after the negotiation, and I would also not go against what we had previously discussed in the negotiation. I believed that my integrity was more important to me than the payment. I did recognize this weakness, but I did not capitalize on the weakness.

I realized now that I am becoming a negotiator that analyses each move before taking it. The first negotiation I was trying to be nice the whole negotiation and because of that I forgot about some of my interest. This negotiation I was able to focus on both my interest and the other parties. I analyzed each response before taking action, which is why I gave him misinformation about our machinery. It was either pay a little more and get just the pits or do all the picking, washing, and separating and also bidding for the prunes myself. I do not think I took advantage of Tray because I did pay compensation for the extra work that he would have to do initially.

The biggest weakness, which was also a threat during this negotiation, was the mistake on the contract. This was an opportunity to take advantage of Tray, and if I would have taken that opportunity I could have severely damaged my reputation as a negotiator. Since I wrote the contract, it could have looked like I purposely miscalculated the percentage to my advantage. If I had chosen to keep the initial contract I would have represented myself as a sneaky and unethical person.

A threat that occurred was that Tray did not understand that we needed different parts of the prune. Although, he caught on very quickly, we could have hit one of the obstacles mentioned in article 1.8. If Tray would have continued to think of his own interest and not listen completely to mine we would not have been able to collaborate on a win-win contract.

I do not believe that I had any weaknesses that left me with a target on my chest. The negotiation went as I had expected it to. If given the chance I would probably give Tray all the information right off the bat, without any misrepresentation. Although the misleading of the machinery worked out in my favor, I think that I could have gotten the same effect if all the information had been presented truthfully. Also, I would not feel the internal battle that I negotiated unethically.

Brief Summary of YOU as a negotiator

I negotiated on the basis that I wanted to work together and figure out exactly what each of us needed. I was able to get what I needed out of the contract while coming together with Tray to figure out his needs. I was also able to figure out the payment of the prunes and how much we were both willing to pay for them. I stuck to the collaboration strategy and did not take advantage of my competitor but instead saw him as a partner.

Brief Summary of your COUNTERPART as a negotiator

Tray started the negotiation exactly how I was going to start it, with background information on what exactly we both wanted. He was great at thinking of possible situations that we may encounter. He did not live up to his reputation as “ruthless” but instead was compassionate to my organization. He believed that we both had a similar interest and was able to come up with some of the compromises to our contract. He also stepped up and took the initial task of bidding for the prunes and doing the labor to separate the prunes.

Who do you believe did a better job of negotiating? 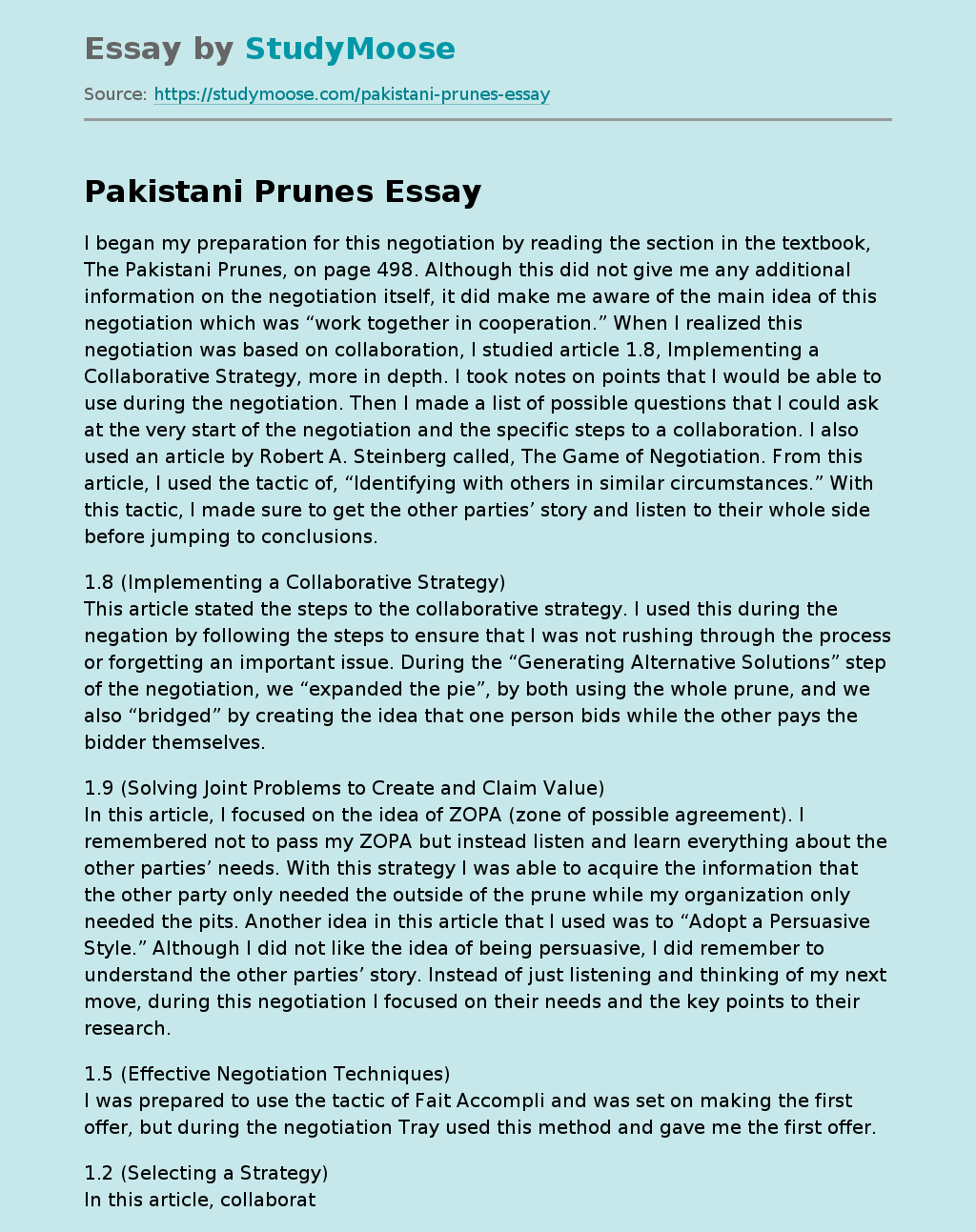