Art allows us to look at the world from a different and unique perspective; all of us interpret artwork differently. It is a great way for people to express feelings, ideas, concepts and ideologies, and for some, it helps us express whatever cannot simply be defined by words. Art gives you freedom to explore things in a different way, and preserve your thoughts on the canvas for everyone else to see. When we look at artwork that portrays a universal idea, we feel a sense of unity with others who perceive the artwork in the same way because it tells us we are not alone in the way we think.

Don't use plagiarized sources. Get your custom essay on
“ Pablo Picasso’s Life, Works and Contributions to Art ”
Get custom paper
NEW! smart matching with writer

Great pieces of artwork are so brilliant that they can bring us to a new world, change our way of looking at things and distance us from the commonalities of everyday life. It makes us feel rejuvenated and you can even lose yourself in its beauty! Studying and admiring artwork also develops our critical thinking skills.

One of the greatest artists who ever lived is Pablo Picasso. He had contributed so much in the name of art. He had demonstrated extraordinary artistic talent in his early years while painting in a realistic manner through his childhood and adolescence. During the first decade of the 20th century, his style changed as he experimented with different theories, techniques, and ideas. His revolutionary artistic accomplishments brought him universal renowned and immense fortune, making him one of the best figures in 20th century art. Let us then venture into the astonishing life, works and contributions to arts of Pablo Picasso.

Picasso was born in October 25, 1881 in the city of Málaga, Spain. He was baptized Pablo Diego José Francisco de Paula Juan Nepomuceno María de los Remedios Crispiniano de la Santísima Trinidad by his parents, Don José Ruiz y Blasco and María Picasso y López. Picasso showed a passion and a skill for drawing from an early age. From the age of seven, Picasso received formal artistic training from his father in figure drawing and oil painting. Even Picasso’s earliest drawings executed when he was about 10 years old, showed an exceptional technical facility. When the family moved to Barcelona in October 1895, Picasso attended La Lonja, the school of fine hearts there and the Royal Academy of Fine Arts of San Fernando in Madrid. In October 1900 he made the first of three visits to Paris, where he established himself finally in April 1904.

During the intensely creative years 1899-1901, Picasso’s style varied considerably. At the start, he used strong colors in a Postimpressionist manner. Then he painted predominantly in blue, his so called Blue Period of late 1901-1904. Until Mid 1901 his principal subjects were lively scenes of popular and bourgeois life (cabarets, racecourses, dance halls, etc.) Toward the end of 1901, however, Picasso’s world became that of the suffering victims of society: prostitutes, beggars, drunkards, etc. In 1904, his gloom lifted and he looked freshly at humanity with tenderness and admiration and adopted warmer colors and a more harmonious, classical style of draftsmanship. During this Rose Period, his favorite subjects were dancers and acrobats.

Between the end of 1906 and the spring of 1907, while influenced by the painting of Paul Cezanne, Picasso produced a painting called “Les Demoiselles d’Avignon” that constitutes a violent break with tradition. This painting pointed the way toward Cubism, a new pictorial style that Picasso and his friend Braque began to develop side by side and in close friendship. They disregarded the conventional means used for creating illusions of reality such as one point perspective, chiaroscuro, and the definition of form and color by light, aiming instead to represent objects more conceptually by breaking them into geometrical units, or small cubes, and by depicting a single object on the same canvass from a multiplicity of angles. Picasso was to continue elaborating and perfecting this style until about 1925. Simultaneously, from about 1915 onward, he began to work in the opposite direction, depicting figures of a subtly detached classicism- linear, sculptural, and monumental.

After 1925 Picasso began to depict emotionally-charged bodies and heads whose dislocations give rice to double images and pictorial metaphors. A private Surrealist vocabulary of powerful symbols (e.g., the Minotaur) Emerged in the 1930’s to express his personal dilemmas and stress. Picasso’s interest in the sculpture, dormant since 1905, revived at this time. The outbreak of the Spanish Civil War in 1936 inspired the great and harrowing mural painting “Guernica” (1937), the first reference of his work to political events.

In 1944 Picasso joined the Communist Party, and in 1949 his “Dove” lithograph was adopted as the symbol of the World Peace Congress. In the pos-war years much of Picasso’s work centered on the themes of wars of peace and man’s right to leisure and peaceful relaxation. After 1955, the theme of the artist and his magic powers assumed great importance in his work. Picasso’s powerful inventive gifts led him to work in many fields. He produced (1917-1924) some famous decors for Sergey Diaghilev’s Russian ballet company. He also made significant technical innovations in lithography and linocutting and produced a great quantity of painted pottery. Pablo Picasso died on April 8, 1973 at age 91in Mougins, France, while he and his wife Jacqueline entertained friends for dinner.

Cubism is modern art made up mostly of paintings. The paintings are not supposed to look real The artist uses geometric shapes to show what he is trying to paint. Early cubists used mainly grays, browns, greens, and yellows. After 1914, Cubists started to use brighter colors. Cubism was the beginning of the Abstract and Non-objective art styles.

In Expressionist Art, the artist tries to express certain feelings about something. The artists that painted in this style were more concerned with having their paintings express a feeling than in making the painting look exactly like what they were painting.

Surrealist paintings were generally based on dreams. Their paintings were filled with familiar objects which were painted to look strange or mysterious. They hoped their odd paintings would make people look at things in a different way and change the way they felt about things. They thought that their paintings might stir up feelings in the back of people’s minds.

Naturalism is a type of art that shows things exactly as they appear in life. It began in the 18th century, but the greatest Naturalist era was in the mid-19th century. Most Realists were from France, but there were some famous American painters who were Realists also.

The Old Guitarist is an oil painting by Pablo Picasso created in 1903. It depicts an old, blind, haggard man with threadbare clothing weakly hunched over his guitar, playing in the streets of Barcelona, Spain. It is currently on display in the Art Institute of Chicago.

Three Musicians is the title of two similar collage and oil paintings by Spanish artist Pablo Picasso. They were both completed in 1921 in Fontainebleau near Paris, France, and exemplify the Synthetic Cubist style. Each painting features a Harlequin, a Pierrot, and a monk, who are generally believed to represent Picasso, Guillaume Apollinaire, and Max Jacob, respectively.

It was created in response to the bombing of Guernica, Basque Country, by German and Italian warplanes at the behest of the Spanish Nationalist forces, on 26 April 1937, during the Spanish Civil War. Guernica shows the tragedies of war and the suffering it inflicts upon individuals, particularly innocent civilians. This work has gained a monumental status, becoming a perpetual reminder of the tragedies of war, an anti-war symbol, and an embodiment of peace. On completion Guernica was displayed around the world in a brief tour, becoming famous and widely acclaimed. This tour helped bring the Spanish Civil War to the world’s attention.

Pablo Picasso who’s considered to be the most famous artist in the 20th century inspires many people through his paintings in which he express his feelings, affections and ideals. He is widely known for co-founding the Cubist movement, the invention of constructed sculpture, the co-invention of collage, and for the wide variety of styles that he helped develop and explore. Picasso’s work was inspired by what was happening around him from his gloomy Blue Period to the uplifting Rose Period. He interprets art in his own way, adding his own unique flavor to his interpretation. Picasso was exceptionally prolific throughout his long lifetime. The total number of artworks he produced has been estimated at 50,000, comprising 1,885 paintings; 1,228 sculptures; 2,880 ceramics, roughly 12,000 drawings, many thousands of prints, and numerous tapestries and rugs. Picasso tells us that art itself requires no explanation, “Everyone wants to understand art.

Why don’t we try to understand the song of a bird? Why do we love the night, the flowers, everything around us, without trying to understand them? But in the case of painting, people think they have to understand. If only they would realize above all that an artist works of necessity, that he himself is only an insignificant part of the world, and that no more importance should be attached to him than to plenty of other things which please us in the world though we can’t explain them; people who try to explain pictures are usually barking up the wrong tree.” We admire art, yet we may never know why. It is captivating because of its mysterious allure. Like a little girl playing hide and seek with her boisterous brothers, art refuses to give in to definition, to reason, to restraint or to direction. Art gives us the roads, yet not the map. As the bewitching seductress toys with us, her subjects, we follow her blindly and blissfully into the unknown. 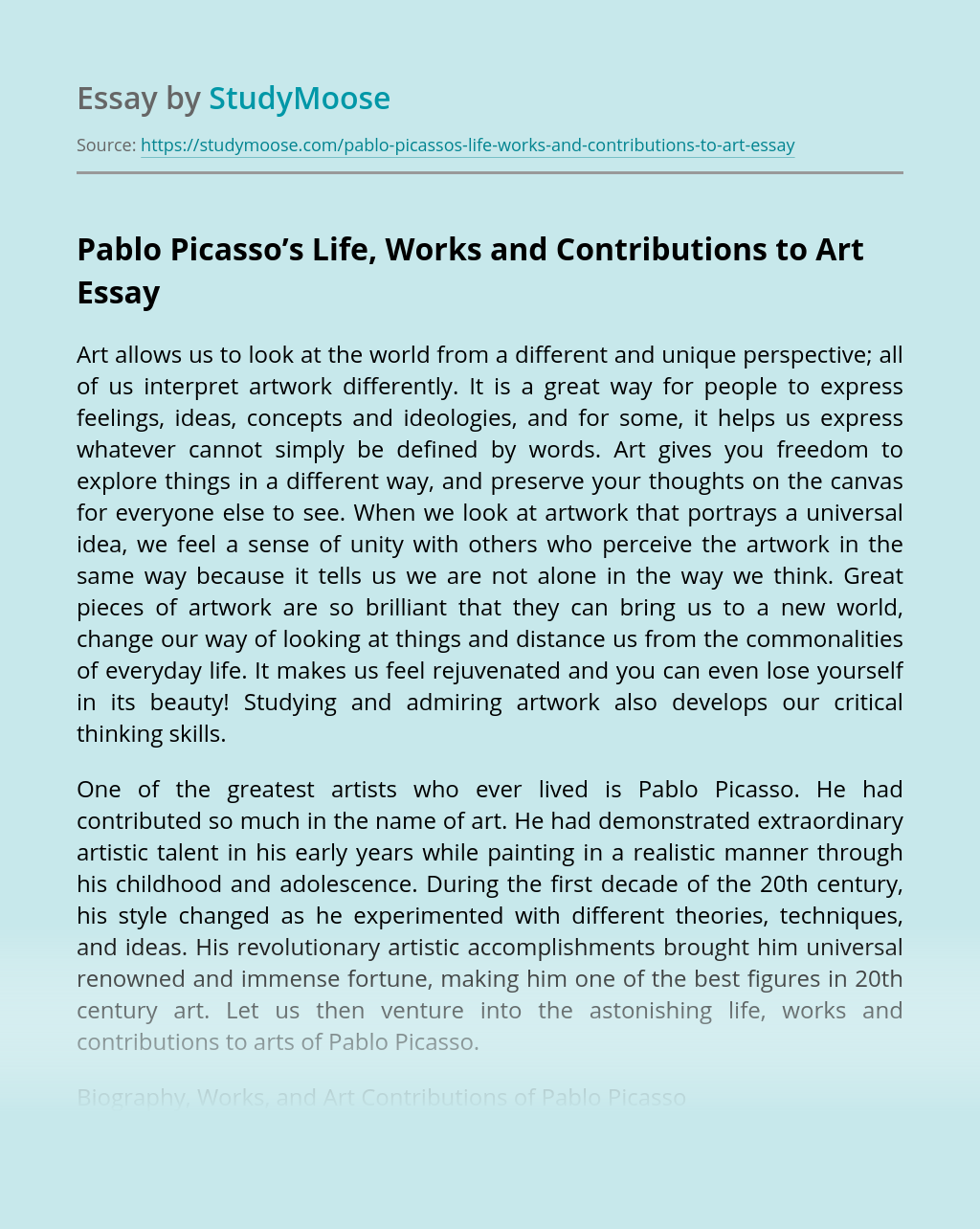