“Ozymandias” (pron.: /ˌɒziˈmændiəs/,[2] also pronounced with four syllables in order to fit the poem’s meter) is a sonnet by Percy Bysshe Shelley, published in 1818 in the 11 January issue of The Examiner in London. It is frequently anthologised and is probably Shelley’s most famous short poem. It was written in competition with his friend Horace Smith, who wrote another sonnet entitled “Ozymandias” seen below. In addition to the power of its themes and imagery, the poem is notable for its virtuosic diction.

Don't use plagiarized sources. Get your custom essay on
“ “Ozymandias” by Percy Bysshe Shelley ”
Get custom paper
NEW! smart matching with writer

The rhyme scheme of the sonnet is unusual and creates a sinuous and interwoven effect.

Percy Bysshe Shelley’s 1817 fair copy, Bodleian Library
The central theme of “Ozymandias” is the inevitable decline of all leaders, and of the empires they build, however mighty in their own time.

The ‘Younger Memnon’ statue of Ramesses II in the British Museum thought to have inspired the poem Ozymandias represents a transliteration into Greek of a part of Ramesses’ throne name, User-maat-re Setep-en-re.

The sonnet paraphrases the inscription on the base of the statue, given by Diodorus Siculus in his Bibliotheca historica, as “King of Kings am I, Osymandias. If anyone would know how great I am and where I lie, let him surpass one of my works.”[5][6] Shelley’s poem is often said to have been inspired by the 1821 arrival in London of a colossal statue of Ramesses II, acquired for the British Museum by the Italian adventurer Giovanni Belzoni in 1816.

Rodenbeck and Chaney, however,[8] point out that the poem was written and published before the statue arrived in Britain, and thus that Shelley could not have seen it. Its repute in Western Europe preceded its actual arrival in Britain (Napoleon had previously made an unsuccessful attempt to acquire it for France, for example), and thus it may have been its repute or news of its imminent arrival rather than seeing the statue itself which provided the inspiration. The 2008 edition of the travel guide Lonely Planet’s guide to Egypt says that the poem was inspired by the fallen statue of Ramesses II at the Ramesseum, a memorial temple built by Ramesses at Thebes, near Luxor in Upper Egypt.

This statue, however, does not have “two vast and trunkless legs of stone”, nor does it have a “shattered visage” with a “frown / And wrinkled lip, and sneer of cold command.” Nor does the base of the statue at Thebes have any inscription, although Ramesses’s cartouche is inscribed on the statue itself. Among the earlier senses of the verb “to mock” is “to fashion an imitation of reality” (as in “a mock-up”),[10] but by Shelley’s day the current sense “to ridicule” (especially by mimicking) had come to the fore. This sonnet is often incorrectly quoted or reproduced.[11] The most common misquotation – “Look upon my works, ye Mighty, and despair!” – replaces the correct “on” with “upon”, thus turning the regular decasyllabic (iambic pentameter) verse into an 11-syllable line.

Both Percy Bysshe Shelley and Horace Smith submitted a sonnet on the subject to The Examiner published by Leigh Hunt in London. Shelley’s was published on January 11, 1818 under the pen name Glirastes, appearing on page 24 under Original Poetry. Smith’s was published, with the initials H.S., on February 1, 1818. Shelley’s poem was later republished under the title “Sonnet. Ozymandias” in his 1819 collection Rosalind and Helen, A Modern Eclogue; with Other Poems by Charles and James Ollier and in the 1826 Miscellaneous and Posthumous Poems of Percy Bysshe Shelley by William Benbow, both in London.

IN Egypt’s sandy silence, all alone,
Stands a gigantic Leg, which far off throws
The only shadow that the Desert knows:—
“I am great OZYMANDIAS,” saith the stone,
“The King of Kings; this mighty City shows
“The wonders of my hand.”— The City’s gone,—
Nought but the Leg remaining to disclose
The site of this forgotten Babylon.

We wonder,—and some Hunter may express
Wonder like ours, when thro’ the wilderness
Where London stood, holding the Wolf in chace,
He meets some fragment huge, and stops to guess
What powerful but unrecorded race
Once dwelt in that annihilated place.
– Horace Smith.[13]

Percy Bysshe Shelley wrote this poem in competition with his friend Horace Smith, who published his sonnet a month after Shelley’s in the same magazine.[14] It takes the same subject, tells the same story, and makes a similar moral point, but one related more directly to modernity, ending by imagining a hunter of the future looking in wonder on the ruins of an annihilated London. It was originally published under the same title as Shelley’s verse; but in later collections Smith retitled it “On A Stupendous Leg of Granite, Discovered Standing by Itself in the Deserts of Egypt, with the Inscription Inserted Below”.

The poem has made numerous appearances in popular culture, and has significantly influenced the production of new creative works. For example, Terry Carr’s science fiction short story Ozymandias was inspired by the poem, as was the song Ozymandias by Jean-Jacques Burnel. Edward Elgar began setting the poem to music, but never finished it. The best-known setting appears to be that in Russian for baritone by the Ukrainian composer Borys Lyatoshynsky. On television, Monty Python’s Flying Circus featured a humorous parody named “Ozymandias, King of Ants”, and the Beauty and the Beast episode titled Ozymandias included a reading of the entire poem.

Writer Alan Moore named a superhero in the comic book miniseries Watchmen after Ozymandias, and overtly quoted the poem; and the alternative rock group Sisters of Mercy wrote the song Ozymandias which appeared on the B side of the 1987 single Dominion/Mother Russia from the album Floodland. Short excerpts of the poem, or references to its title, have appeared in a variety of other contexts including the set for the Closing Ceremony of the 2012 Olympic Games on 12 August 2012. 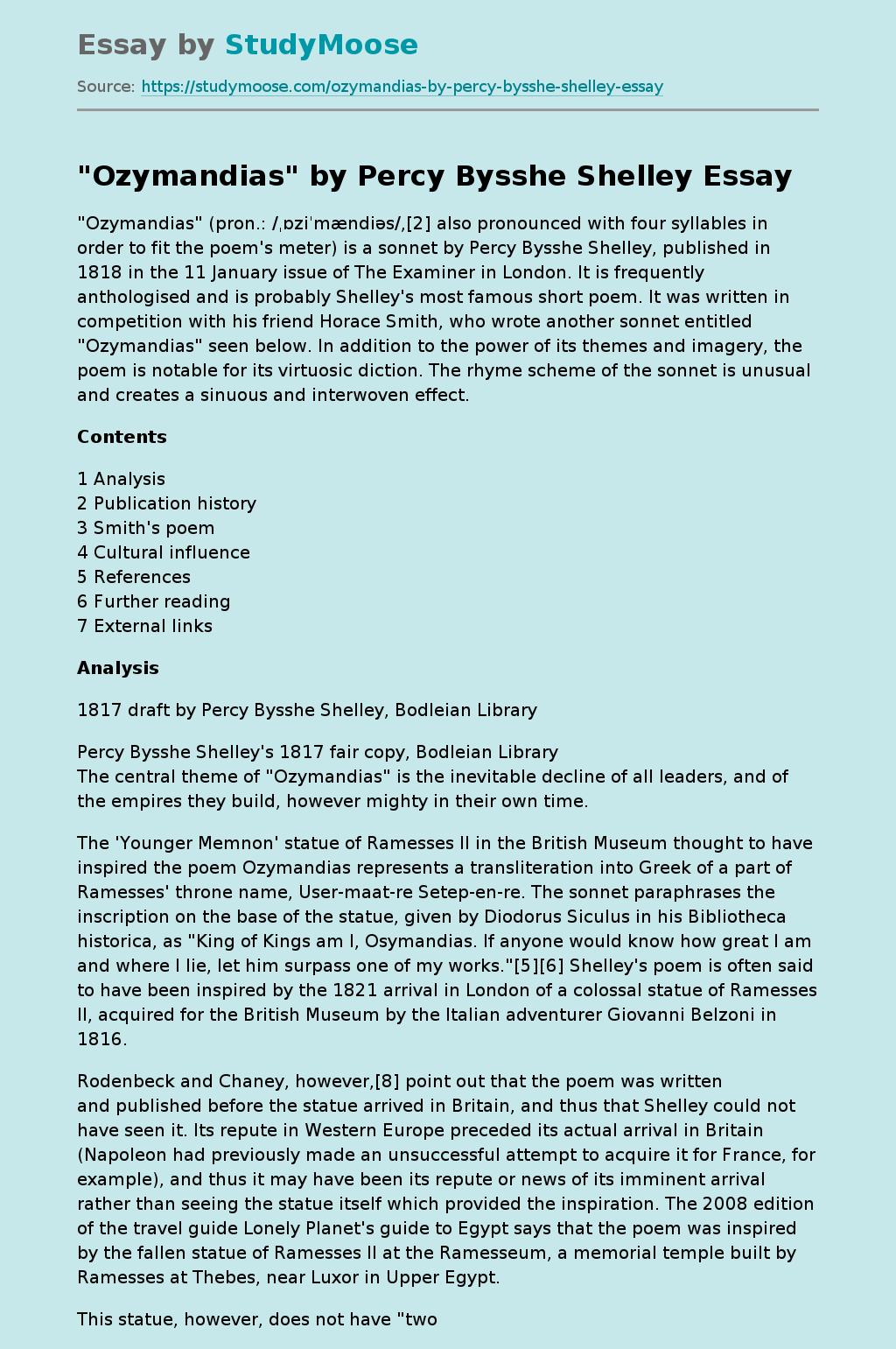