Oxford Don and Half Caste

Don't use plagiarized sources. Get your custom essay on
“ Oxford Don and Half Caste ”
Get custom paper
NEW! smart matching with writer

In the poem ‘Half Caste’, Agard challenges the reader prejudices towards people of mixed ethnicity.

In ‘Listen Mr. Oxford Don’, Agard uses repetition of particular words and imagery to help him convey his ideas. He uses the phrase, “is a dangerous one” twice in the poem. He also uses sentence like, “I ent have no gun” to create the image of violence.

Words such as, ‘bashing’ and ‘slashing’ are also used by Agard which suggest him being very threatening. The reason that Agard creates all these violent images is because he wants us to know that he’s a peaceful man, but he can be very dangerous if people think that English has to be spoken in a particular way. Unlike ‘Listen Mr. Oxford Don’, in ‘Half Caste’ Agard concentrates more on using imagery to make his point.

An example of imagery used by Agard, “when yu say half-caste yu mean tchaikovsky mix a black key wid a white key?” Here, Agard is saying to the reader that Tchaikovsky uses both white and black notes, but no one calls him half caste because he’s respected by others.

Agard is asking the reader that if you can mix a black and white key, then why can’t you be of mixed race? As the poem goes on, Agard carries on using examples to make his point, but this time it relates to his body.

He says, “why I offer yu half-a-hand an when I sleep at night I close half-a-eye”. He’s saying this in a way that he can only have half a hand and half an eye because he’s “half caste” or half made. When people call him ‘half caste’, he’s offended because it’s like saying that he’s not a complete human being, he’s only half made. He wants these people to review the term ‘half caste’, and think about it before using as it’s the wrong term to use.

Agard uses non-standard English in ‘Listen Mr. Oxford Don’. He uses a lot of double negatives for example, “Me not no Oxford Don”. Many of his spellings also comes from the Caribbean dialect: “de”, “dont”, “ent”, etc. Both double negatives and Caribbean dialect spellings are informal and non-standard. The purpose of him using these words is to show that he’s against the academics because he knows that the academics would never write in a non-standard way like this. Agard also uses colloquial language, “I’m not a violent man Mr. Oxford Don.” This type of language is used to speak not to write so it’s informal and non-standard. Agard uses non-standard English throughout the poem; this shows that he’s unashamed to use it, and shows that he’s challenging Standard English which is the accepted form of English.

Alternatively, in ‘Half Caste’, non-standard English is used for different reasons. In this poem, Agard also uses words from the Caribbean dialect, for example, “dem”, “yu”, etc, but the effect of this is to show that he’s not fully English and he’s of a mixed race. Agard also uses the direct address; he refers to himself as ‘I’ and refers to the reader as ‘you’ as shown in this quotation, “but yu must come back tomorrow wid de whole of yu eye an I will tell yu de other half of my story.” Agard makes the reader feel as though the point is being made directly to them, and makes them feel more challenged that if they want to hear another half of his story, they need to be more open minded. Most importantly, they must not judge people because of their race.

In ‘Listen Mr. Oxford Don’, there’s no clear structure to the poem. There is not the same number of lines in each stanza, and there’s no fixed number of syllables in each line like there would be in a Standard English poem. He also doesn’t use any form of punctuation, and he even adds a slash in the middle of the line: “to split/ up yu syntax”. This makes it even more non-standard because slash breaks the rhythm of the poem.

All of these things shows the fact that he doesn’t believe Standard English is the only form of English; there are other forms of English which are equally legitimate. In ‘Half Caste’, the lines throughout the poem are generally quite short, the effect of this is to make the poem go faster, and make us receive short quick messages. Agard also uses many commands, for example, “Explain yuself wha yu mean when yu say half-caste”. The effect of this is to grab people’s attention, but it’s also asking the reader what do we mean when we say “half caste”. Do we say it because we feel prejudiced towards people of mixed ethnicity?

In ‘Listen Mr. Oxford Don’, the tone starts off lightly; this is when he’s talking about who he is and where he’s from. As the poem goes on, he begins to talk about violence, “I ent have no gun, I ent have no knife”. This is when his tone starts to become quite aggressive and threatening. After this he says, “I dont need no hammer to mash up your grammar”, his tone becomes even more threatening because he says that he will speak whatever he wants.

The word ‘mash up’ implies violence, Agard is threatening to ‘destroy’ the English language. Unlike ‘Listen Mr. Oxford Don’, the tone of ‘Half Caste’ is lighthearted, only towards the end of the poem that the tone starts to get serious. This is when he says that we need to give people full respect if we want to understand them completely as human beings. If we’re categorizing them into groups, we’re not giving them respect. In both of the poems, Agard uses clever humor to grab our attention, but at the same to provoke our preconceptions.

Both of these poems are very political, and have a social impact. In ‘Listen Mr. Oxford Don’, Agard is challenging the traditional institutions to say that there’s no such thing as the ‘correct’ form of English anymore. Society has moved on, and now we need to embrace other forms of English language as well because we all have different dialects, but each dialect is as valid as the other. The ‘traditional’ form of English doesn’t mean it’s more superior or more acceptable in society. In ‘Half Caste’, Agard not only wants to address the reader, he’s challenging the reader into questioning their own preconceptions and prejudices. He’s also getting them to think about the implications of the words they use, because most people do not know the full meaning of it, and do not realize the weight of what they’re saying. For example, the word ‘half caste’ can seriously offend the people who are of mixed ethnicity.

Oxford Don and Half Caste. (2017, Oct 16). Retrieved from https://studymoose.com/oxford-don-and-half-caste-essay 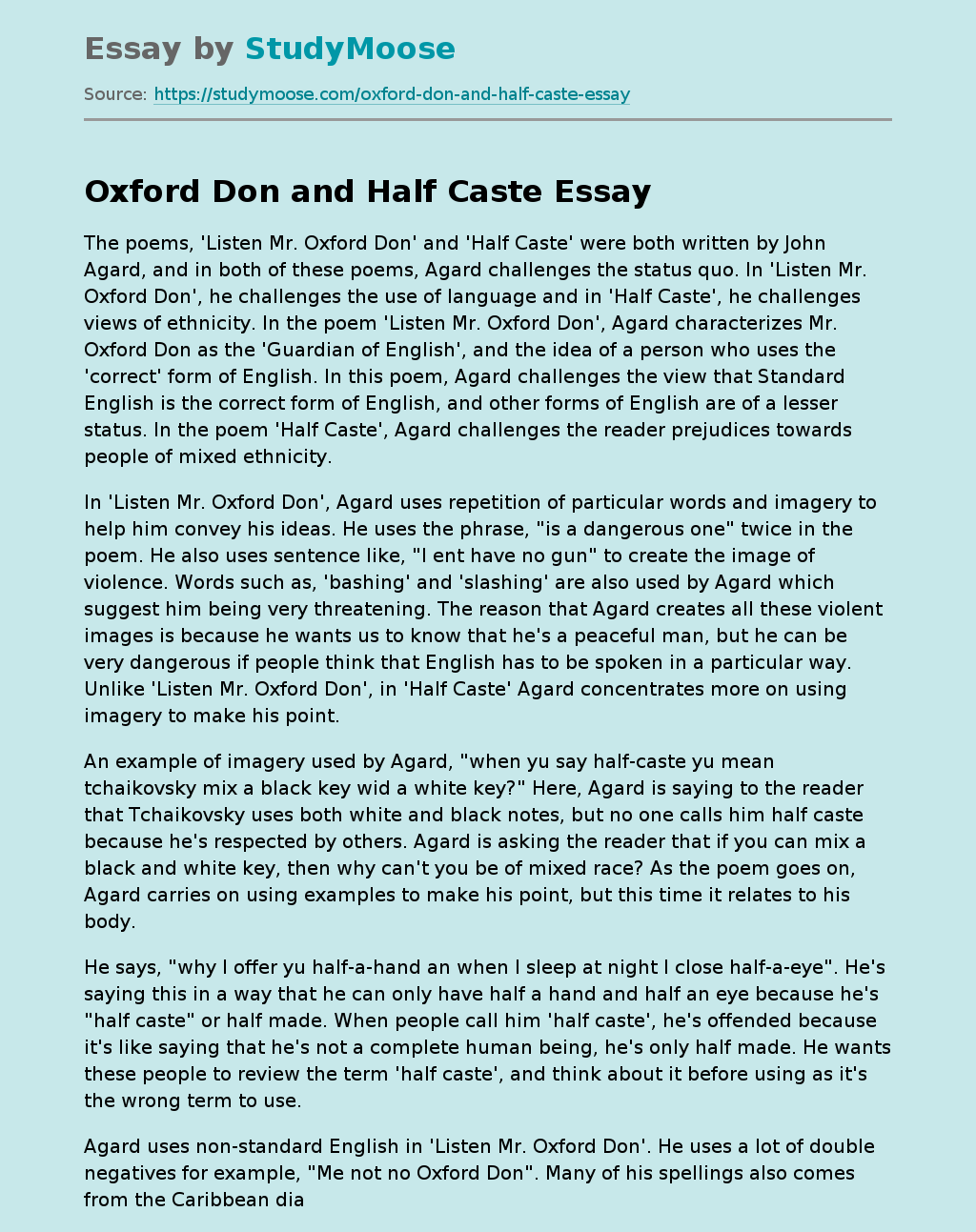