In this excerpt from “Owls” Mary Oliver writes with grave, and pensive to consider her towards nature by indicating the complexities of one’s response towards nature. Her usage of figurative language to visualizing the surrounds of the flowers, her metaphors to control the interpretation of the owls and her imagery of the yin and yang point of view in her essay to fully describe the owls and the flowers. Oliver’s use of figurative diction produces a vivid image for the reader to engulf themselves in.

Don't use plagiarized sources.
Get Your Custom Essay on “Owls” by Mary Oliver Rhetorical Analysis Just from $13,9/Page

The thrilling description of the great horned owl in a tree, depicting the owls a “pure” hunter of the world. The author explains that the owls are “merciless” against other animals generating a predator that is fearless in his hunt for his prey.

The author is constantly placing labels upon the owls such as “death-bringer” to associate the owl with the cause of death. The author’s use of imagery to create a contrasting view of nature such as a yin and yang portray.

The owl represents the yin of these cynical unforgiving creatures of “razor-tipped toes” displaying a rough character that terrifies any other creatures. While the yang of the flowers is dream-like and serene “red and pink and white tents” that truly embody the light and joy; the two are compared even through their colors of these “night” and light characters of nature.

Contrasting is a major focus which the author uses throughout the excerpt about the characters of nature. Oliver depicts the “screech owl on her wrist” to explain the complicated characters of nature. Even though this great horned owl is terrifying, Oliver still is in amazement of it. She says it would become the main purpose of her life. While “the scream of the rabbit” in “pain and hopelessness” is terrible, it is not comparable with the “scream of the owl” which is of “sheer rollicking glory.” Nature has extremes, and the owl is the extreme of terror.

The flowers, however, represent the extreme of happiness. Through parallelism, Oliver exemplifies the happiness given by the fields of flowers. The flowers have “sweetness, so palpable” that it overwhelms Oliver. Henceforth, Oliver though the use of diction her creates shift in the tone of the piece from cynical to serene. By translating from death and predator-prey owls to “immobilizing happiness” flowers, she primarily used contrasting views and lots of imagery to convey her view of nature different characters. 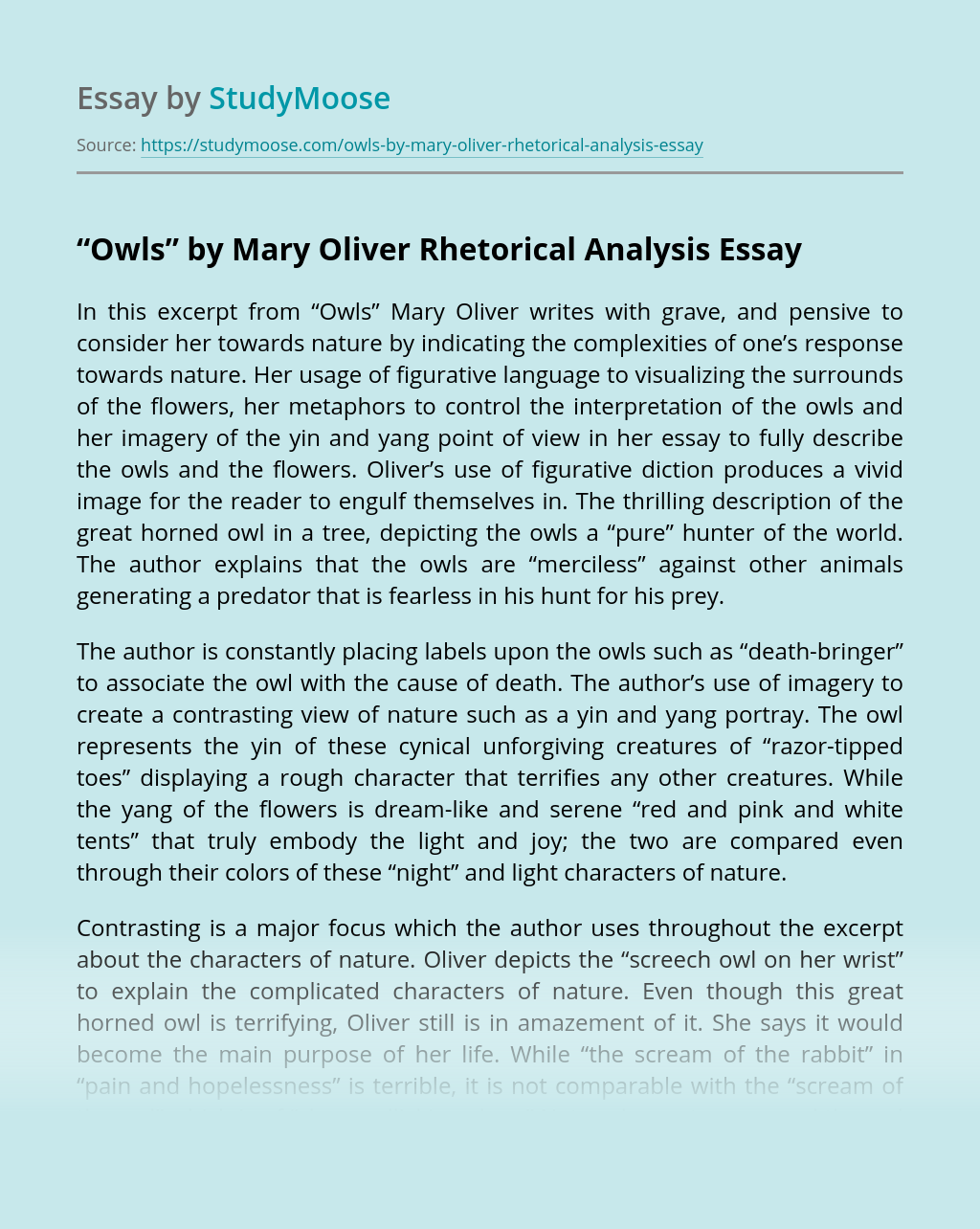 Alibaba: Competing in China and Beyond

Introduction In this report I will examine the case “Alibaba: Competing in China and Beyond.” Alibaba under the leadership of Jack Ma, its founder has transformed into one of the most successful e-commerce companies in China. In the 2000s Alibaba had emerged as the largest e-commerce company in China. The company tailored its strategies to...

Preparations for the New Year begin a couple of weeks before the big day. This is a fun time full of anticipation and joy as we get ready for the thrill and excitement of the celebrations. According to the traditions, this is the time to clean the house, prepare food for the feast and make...

Get Essay
Heritage And Culture in A Pair of Tickets

Who am I? Have you ever sat and thought of the contributing elements that make you the person you are? In “A Pair of Tickets,” in hopes of discovering her real self, June May has a hard time to identify who she is. Amy Tan is an author who utilizes the aspect of character development...

As we know from the case Intel is a big company which produces microprocessors and software. From the case we have three characters; Charles Tang, Yong Li, and Qing Chen. The issue of the case is the termination of a project that is been carried out by Li that must be terminated. In the case...