Between the journal entries from September 10th and 11th, the rat has trapped the scientist by biting the rope while he was in the well, so he is either dead or alive at the bottom of the well. Tayloe was fired because of poison trails leading up to Barney’s dish, and in the scientist’s point of view, Tayloe tried to kill the rat because he thought he was getting too smart. The scientist rationalized on this thinking that this was under the influence of alcohol, that the life on the island was too much for him, and that he lost his guinea pigs.

Don't use plagiarized sources.
Get Your Custom Essay on Overview of Short Story Just from $13,9/Page

The real cause for the dismissal was because the rat tricked the scientist into firing him, by placing poison trails leading up to his dish. Barney needed to get rid of Tayloe for two reasons. The first is Tayloe said Barney was getting too smart, so he was worried he would try and kill him. The second is that Barney was already plotting to kill the scientist, and it would be much easier to do so with Tayloe gone.

Foreshadowing of the surprise ending was “He denied it. Who else then?

”This would make you think of who would have actually tried to poison Barney of the two of them, even though it was neither. One sample of irony in the second last paragraph is “I have now replaced that section or rope and arranged some old sacking beneath it to prevent recurrence of the accident. ” This is ironic because the scientist believed the rope was weathering because of the edge of the masonry, and in trying to fix the problem, he arranged sacking underneath the rope.

But this will do no good, as the rat was biting the rope, and later gets him trapped in the well with the same strategy. In the same paragraph, another sample of irony is “Perhaps I should fix myself a sandwich as I may be down there longer than seems likely at the moment. ” This is ironic because the scientist thinks he will be in the well longer than he hopes. But little does he know, he will be down there for the rest of his short life. In the final paragraph, third sample of irony is “I sprayned my wrist is why this is written so bad.

”This is very ironic because this is the rat pretending to be the scientist so that nothing is fishy. But a sprained wrist doesn’t affect spelling, may just slur a few words. The story is written in journal form because it has to have time between each paragraph. For example, there has to be a gap between the second last and last journal entry, for the point of view to change (scientist to rat). Well, the reultz of my experimentt argh complete. The ratt turned very very smart. The end. 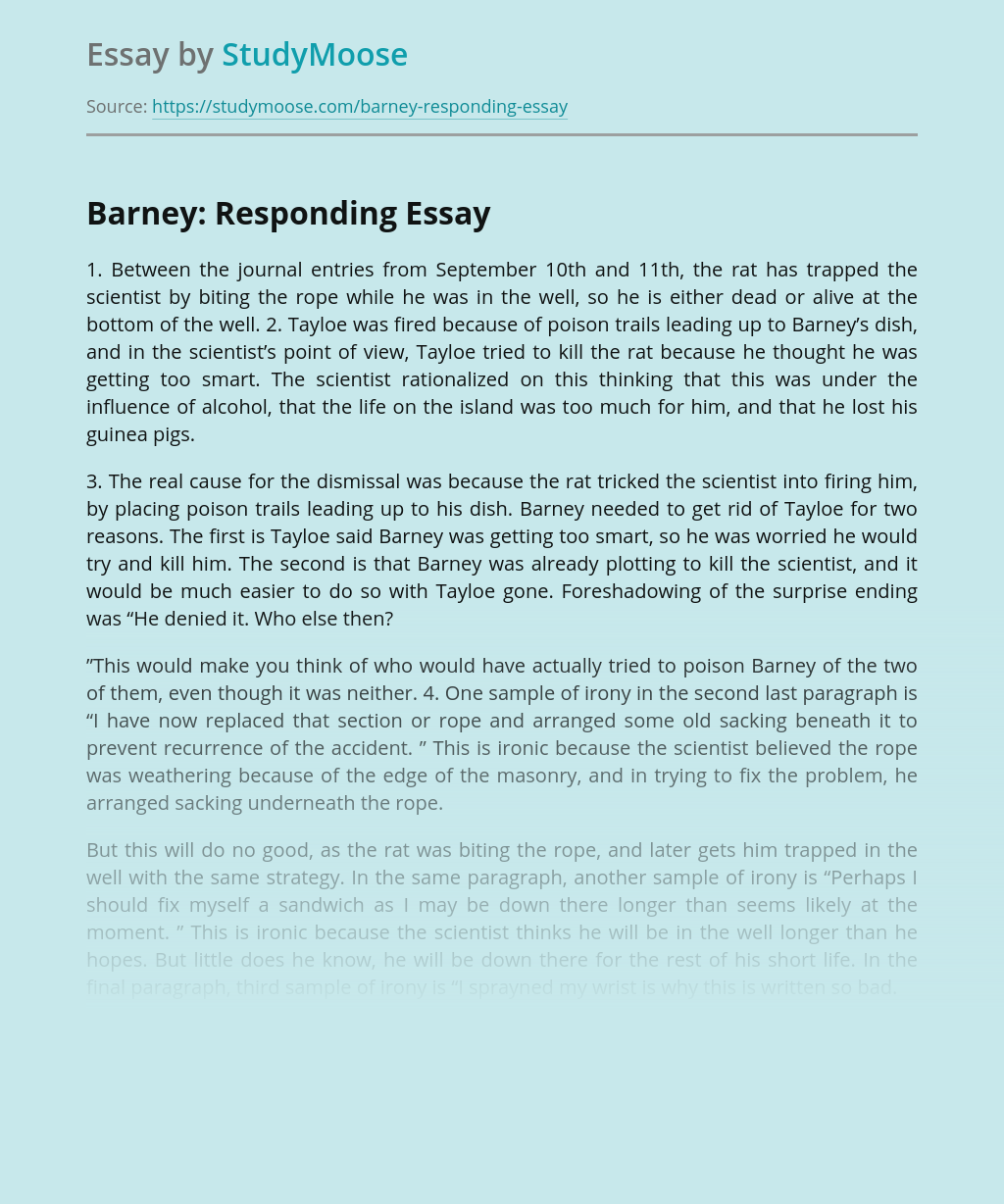 Show knowledge of the Novel

Plot How are the events presented in the story? How is the plot developed? Does the author use a linear (chronological) pattern? Is flashback one of the techniques used? Do any of the early events or incidents prepare the reader for later ones? Do any events or incidents lead you to anticipate the outcome? What...

Barbara Kimenye’s “The Winner,” is an excellent example of a short story that does not necessarily use all five of the literary elements to their fullest potential, but still creates a sense of organic unity. In this analysis, the elements are organized in the order of theme, plot, characterization, setting, and then structure. Each element...

Get Essay
The Slave's dream

‘The Slave’s dream’, written in 1842 by the white man H. W. Longfellow, tells of the final dream of a black slave before his death. It is set on a plantation in America where the slave has stopped in the middle of a day’s work, giving up hope of freedom in life, believing only in...

How far was Lloyd Georges fall from grace in 1922 the result of his own mistakes after 1918?

A general election held in 1918 gave Lloyd George and the Conservative coalition a very comfortable majority in parliament, but it also left Lloyd George in an untenable position. The coalition consisted overwhelmingly of Conservatives, meaning that Lloyd George’s hold on power was extremely weak. He could not do many of the things he would...