Overview of Matale, Its Heritage And Culture

Matale is a city, in Matale District, Central Province, Sri Lanka, 142 kilometres (88 mi) from Colombo and 26 kilometres (16 mi) from Kandy. It is the administrative capital of Matale District. Surrounding the town are the Knuckles foothills called Wiltshire. It is a mainly agricultural area, where tea, rubber, vegetable and spice cultivation dominate. The Knuckles Mountain Range is a special landmark of Matale. The Aluvihara Temple, on the North side of the town, is the historic location where the Pali Canon was first written down completely in text on ola (palm) leaves.

Get a verified writer to help you with Overview of Matale, Its Heritage And Culture

Matale was a site of a major battle in 1848 when the Matale Rebellion started and the British garrison in the Fort Macdowall in Matale was placed under siege by the rebels led by Weera Puran Appu & Gongalegoda Banda who are renowned national heroes in Sri Lanka.

This Historical city was also home to Monarawila Keppetipola, another national hero who led the Wellasa rebellion against the British troops.

His ancestral home, the Kappetipola walawuwa is still present at Hulangamuwa, Matale. Christ Church, Matale was consecrated by Bishop James Chapman on 30 December 1860. The Church site chosen was Fort McDowall, commanding a view of the entrance to Matale via Trincomalee. The Church having been erected and furnished, the Revd William Frederick Kelly, Minister and Chaplain in Matale, and 36 others sent their petition to the Rt Revd James Chapman, D.D., to dedicate and consecrate Christ Church.

The centenary was celebrated on 28 and 29 January 1961. The 125th Anniversary was celebrated on 6 September 1986. The church was gutted by fire in 1985 and was completely restored. Services were held in the Baptist Church in the interim period. On 22 June 1911, there was a special service held in this church in connection with the Coronation of His Majesty King George V, and Queen Mary. The offertory on that was given to the King Edward VIII. Anti Tuberculosis Fund. (Ref. Ceylon Churchman Report for the year ending 20 June 1911)

Overview of Matale, Its Heritage And Culture. (2016, Oct 13). Retrieved from https://studymoose.com/overview-of-matale-its-heritage-and-culture-essay 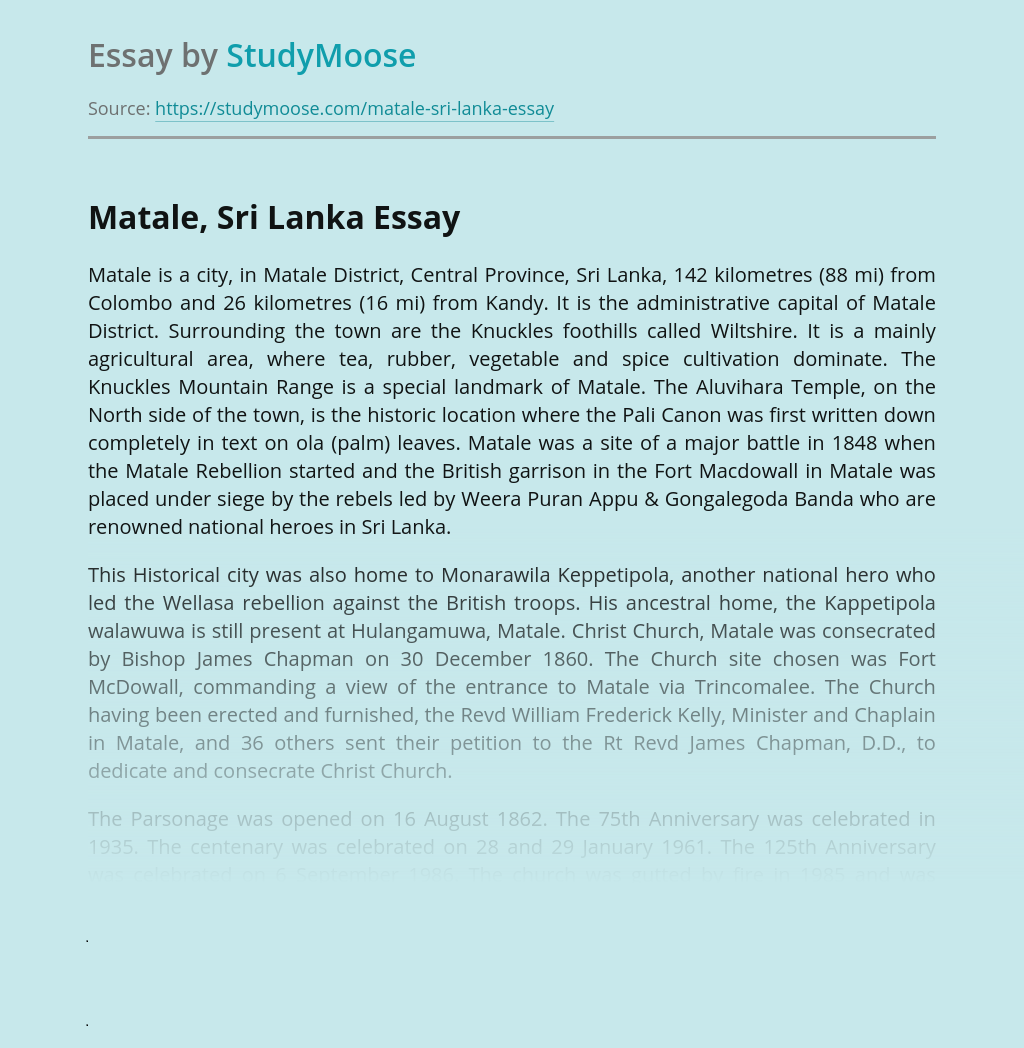 Rate this post Gauhati or Guwahati, the erstwhile capital of the state of Assam was earlier known as “Pragiyotishpura” (The Light of East). This city with a varied history dating back to the 6th century is also the most developed and important city of Assam. The name suits Guwahati remarkably due to its terrain and...

Rate this post Sandals resort is classified as a service. Is not something tangible an individual can buy to bring home to keep or eat, such as a T.V or a steak and potato. The product life cycle state would be the maturity state as it has been in existence for some time. It has...

Get Essay
Tourist Attractions in Europe

Rate this post There are many tourist attractions in Europe and has had a very long history. Many countries such as France, England, Germany, Switzerland, Spain, Italy, and Amsterdam all have these very popular attractions. There is a vast history of tourism around the world, especially in Europe. There are writings of Herodotus, a historian...

Rate this post Kenya is a landlocked country in the continent of South Africa. It is surrounded by five countries. Kenya is a popular destination for tourists travelling to Africa as it offers tourists camel safaris, trekking, game fishing, white water rafting, ballooning, diving, wind surfing and donkey safaris. The major ecotourist attraction in Africa...

Rate this post Gone are the days of the adages like “act like a Roman when you remain in Rome,” and instead it is now just the reverse: the modern hosts are anticipated to tune with the cultures of the guests. With increasing state of globalization, the hospitality sector is now teeming with big possibilities...

Rate this post In his essay “I’m a Banana and Proud of It” (from The Globe and Mail); Wayson Choy explains the reason why he is called a “banana”. Choy begins by expressing his love to his North American citizenship. He mentions that banana means “yellow on the outside and white inside” (365). In other...

Rate this post The issue in the case of “A Brawl in Mickey’s Backyard” is that the employees at Disney feel that they are not treated well by the famous theme park owners going so far as to say that “they want to make money [referring to Disney], but they don’t care about the employees”....

The City of American Dream

Rate this post “Journey beyond the Stars” which is written by Deepak Narang Sawhney, describes Los Angeles with a paradox. On the one hand, it appears as a world city, the capital of the First World, on the other hand as the metropolis of the Third World. All the chapters clearly describe the real conditions...