Don't use plagiarized sources. Get your custom essay on
“ Overview of Dengue Virus ”
Get custom paper
NEW! smart matching with writer

They are important in viral attachment, endocytosis, uncoating and fusion. Based on the shape of the molecule and the location of antibody epitopes, electron microscope shows that the enveloped proteins lie along the surface of the virus lipid bilayer (Rey et al. 1995).

Dengue virus is a vector borne disease that is spread by aedes mosquito. They are called arbovirus because they belong to the group of viruses that are transmitted by arthropodal vectors.

Proficient in: classification of virus

About 400million infections occurs yearly with about 22,000 deaths mainly among children (Bhatt et al., 2013). 100 countries are known to be endemic regions of dengue virus which include the tropic and subtropical regions. A lot of factors such as climate change, urbanization, international travel and trade as well as insecticide resistant mosquitoes drives dengue virus activity which has contributed to the high prevalence in the tropical and subtroptical regions (Weaver, 2013). Disease caused by Dengue virus infection are called Dengue fever. Dengue fever is an acute febrile illness with clinical symptoms including headache, retroorbital pain, myalgia, fever, rash and so on.

AXL serves as a receptor for Dengue virus. AXL receptors are cell surface receptors called Tyrosine kinase which are part of the TAM family of kinases including TYRO3 and MERTK. TAM receptors are expressed by the cells of the vascular, nervous, reproductive, and immune systems, with mature immune cell populations such as macrophages predominantly expressing Axl. (Lemke and Rothlin, 2008). Axl has been shown to play an important role in the signal transduction of normal and malignant cells and in cellular adhesion (Miller et al., 2016)

Macrophages are one of the important immune cells expressing AXL receptors. Macrophages can differentiate from either hematopoietic progenitor cells (HPC) or circulating monocytes. They are part of the innate immune cells responsible for phagocytosis and elimination of apoptotic cells and cellular debris. Macrophages are thus not only crucial for immunity but also for development and tissue homeostasis. (Sieweke and Allen, 2013). Macrophages activities are increased by cytokines secreted by the helper T cells. Cytokines plays a major role in the activation and maturation of macrophages. Cytokines such as the colony stimulating factor- a growth factor, causes cells lines to proliferate and mature into macrophage. The two most important cytokines that regulate the numbers and function of macrophages are the M‐CSF and GM‐CSF. Both have been shown to be vital to the functions of monocytes, macrophages, and DCs (Greter, et al., 2012). The M-CSF are anti-inflammatory in nature and they produce anti-inflammatory cytokine such as IL-10 which helps in monocytes recruitment. Previous studies as shown that in-vivo administration of M-CSF leads to the expansion of the phagocytic system and increase in resident macrophage numbers (Hume et al., 1988). The GM-CSF on the other hand are characterized by their pro-inflammatory and good antigen-presentation capacities. Evidence indicates that GM‐CSF not only promotes the survival of macrophages but also supports their differentiation toward a proinflammatory composition. (Cook et al., 2011).

over the years, it has been shown that viruses have used several strategies to manipulate the host cells for their entry and replication. They manipulate the various important functions of the host cells such as cell division, endocytosis, and apoptosis. Important strategy DENV employs for entry into the cells is the mimicry strategies to mimic host apoptotic mechanism (Benedict et al., 2002). DENV uses this strategy for entry, binding and as well to invade the immune cells. Apoptosis is a normal function of the cells. Which is a mechanism to eliminate abnormal or dead cells. Thus, the removal of these (apoptotic) cells is a normal function of the cells. Dengue virus disguised as an apoptotic debris which triggers uptake by endocytosis and thus diminishing the immune system. (Voll et al., 1997).

During programmed cell death, phosphatidylserine is externalized on the cell surface and recognized by receptors on the surface of phagocytes. The receptors triggers signaling cascade, endocytic engulfment as well as the initiating the anti-inflammatory cytokines (Poon et al., 2014). Previous studies have shown that phosphatidylserine on the viral surface is required for the induction of micropinocytosis, facilitating entry into the immune cells and thus, for infectivity. (Hochreiter-Hufford and Ravichandran, 2013).

No effective vaccine is available to immunize against all the four dengue virus serotypes. It is important to understand the various complex mechanisms DENV use for the interaction with the immune cells. M-CSF and GM-CSF could be a promising biomarker for diagnostic and antiviral prognostic in DENV virus infection (Hume et al., 1989). It is therefore vital during the search for antiviral agent to not primarily focus on killing the virus but to extend therapeutic designs to targeting various mechanisms DENV use to evade the immune cells (Patel et al., 2014). So, it is necessary to explore mechanism such as apoptotic mimicry, roles of AXL receptors and other receptors for the future development of an effective vaccine. (Kariolis et al., 2014). 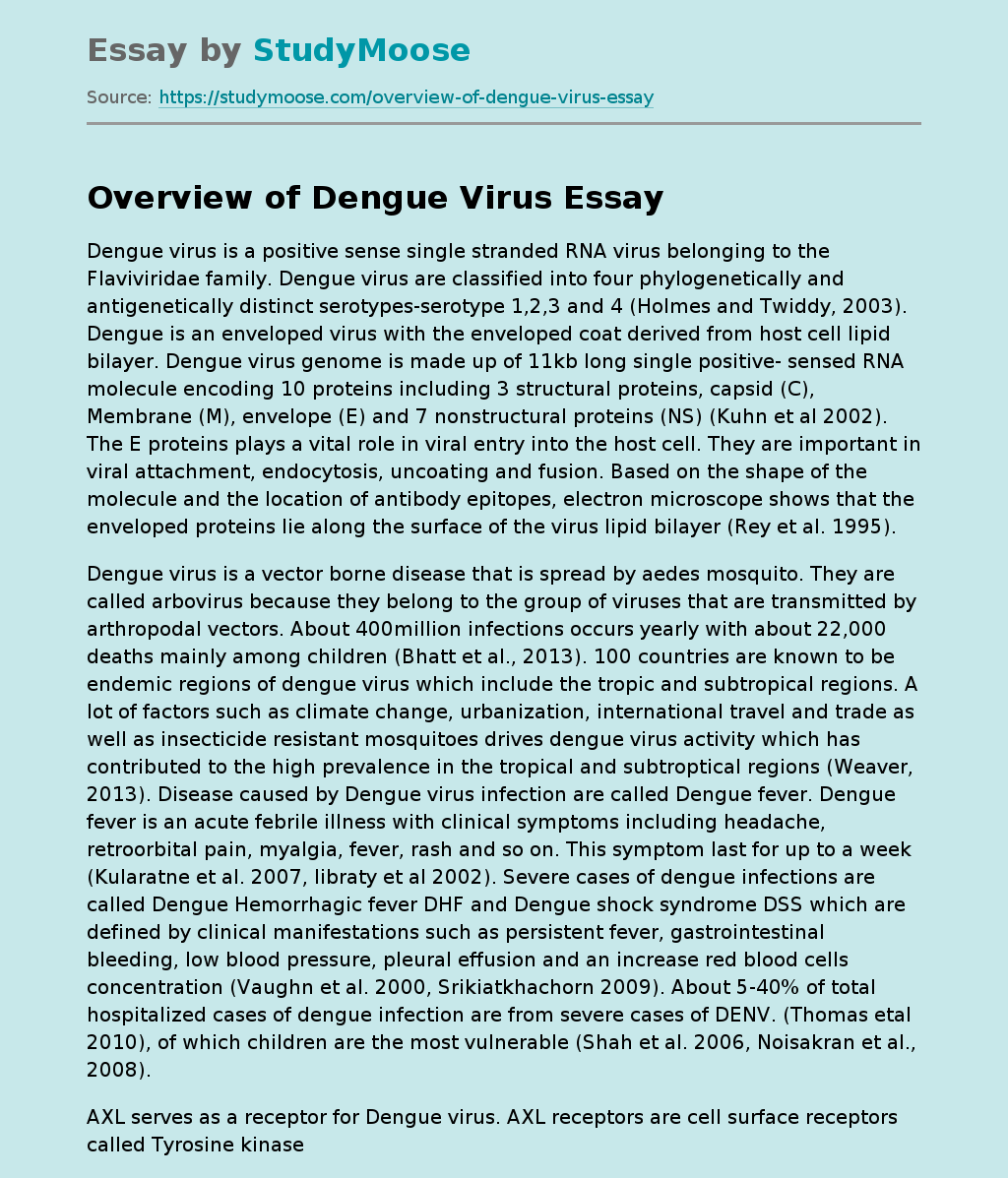