It is evident in humans around the world to lack the ability to recall childhood events such as the places they were and what emotions they felt. The first and most famous explanation comes by Sigmund Freud in 1953, who first offered an explanation to this phenomenon and introduced the term of Childhood Amnesia. In 1910, Freud referred to this phenomenon as the inability to recall episodic memories from the first two years of life and he credited repression of traumatic events as the cause to Childhood Amnesia.

Don't use plagiarized sources. Get your custom essay on
“ Overview of Childhood Amnesia ”
Get custom paper
NEW! smart matching with writer

Many have investigated and questioned whether repression is the correct explanation to infantile amnesia, which is, another name for Childhood Amnesia however, this explanation by Freud had only raised more questions.

Considering the number of several explanations about childhood amnesia there is surprisingly very little evidence supporting its existence. Most memory theories fall into two categories: neurological theory, which attributes the cause of Childhood Amnesia to the underdevelopment of brain structures in roles of the hippocampus (HPC) and the prefrontal cortex (PFC) which is essential in forming and retaining the episodic memories in the brain.

It appears that an explanation for rapidly forgetting early-life events is due to cognitive development. As the brain matures it causes an inability in adults to recall memories from their early life because they were never formed, or the memories were once formed, but later they became unreachable due to the cerebral changes in order for language to develop. On the other hand, some psychological findings do support and weaken both theories and more importantly, we need to understand their causes.

In 1967 Piaget investigated the Neurological theory where he suggested that at 18-24 months of age, language starts to develop in the brain structure where it is required to recall memories and it also starts to develop episodic memories which are very essential since Childhood Amnesia is the inability to form, retain and recall episodic memories. This theory implies that the cause of Childhood Amnesia is underdevelopment of the brain structures at 18-24 months of age then, a child would not be able to remember coming out of the womb or the first birthday party. Regardless, of the neurological theory Howe and Courage (1993) were able to find that children of two years of age could accurately recall events that took place in the first age of life. According to the neurological theory Childhood Amnesia is due to a delayed development of the structures required to form episodic memories, this theory is conflicting because we clearly see through other studies that children, who have not yet reached the indicated age have developed the ability to form, retain and recall episodic memories.

Another study done by the Program in Neurosciences & Mental Health, The Hospital for Sick Children in Toronto, Canada proposed the neurogenic hypothesis. The Neurogenic hypothesis focuses on the postnatal brain development of new neurons to the hippocampus. They stated that infants including humans, nonhuman primates, and rodents display in the hippocampal high levels of neurogenesis and the infants were not capable of forming long term lasting memories. In the same way, there was a decrease of new neuron levels to the hippocampus to have the ability to form stable long-term memory. They insinuated that neurogenesis levels negatively controls the ability to form long-term memories by replacing synaptic connections in preexisting hippocampal memory circuits. On the contrary, it has been discovered that there are several species with the ability to form long lasting memories increasing significantly when the neurogenesis decreases.

Thirdly, Nelson & Fivush investigated the theory of language development in 2004 by comparing two groups. The first group being the parents that discussed past memories with their children and the second group of parents that did not discuss past memories with their children. They discovered that the children that discussed their memories with the parents reported a superior number of memories than the children that did not. As a result, Nelson & Fivush (2004) found that the memories that occurred before the ability to communicate verbally would develop at risk of being lost because the lack of communication prevents children from processing their memories. Anyhow, as per language developmental theory, the ability to recall episodic memories requires the development of language; nevertheless, we are able to confirm that animals do not have the ability to communicate with sounds in saying words, then, if they are not able to communicate with spoken words, they should not be able to form episodic memories at all. Psychologists suggest that episodic memory is a human phenomenon however, recently, was little evidence found that animals could recall a unique past experience and respond appropriately. Clayton, Dickinson & Griffiths (1999) confirmed that birds have an episodic like components of memory, as they were able to locate and remember when and where they found a variety of food.

In conclusion, we witnessed a number of supportive evidences explaining all the theories however, they are conflicted by contradictory evidence. The first contradictory evidence suggested that children, who have not yet reached the indicated age have developed the ability to form, retain and recall episodic memories. Second, the neurogenic hypothesis contradictory evidence, discovered that there are several species with the ability to form long lasting memories increasing significantly when the neurogenesis decreases. Third, as per language developmental theory the contradictory evidence stated confirmed that animals cannot communicate with spoken words, but they were able to form episodic memories. It is clear that childhood amnesia is not being understood by looking at the biological or developmental theories. The researches lack culture, emotion, and repression that should be considered to better understand the cause of infantile amnesia. Even a more objective method such us the usage of a fMRI, could bring light to understanding this phenomenon. 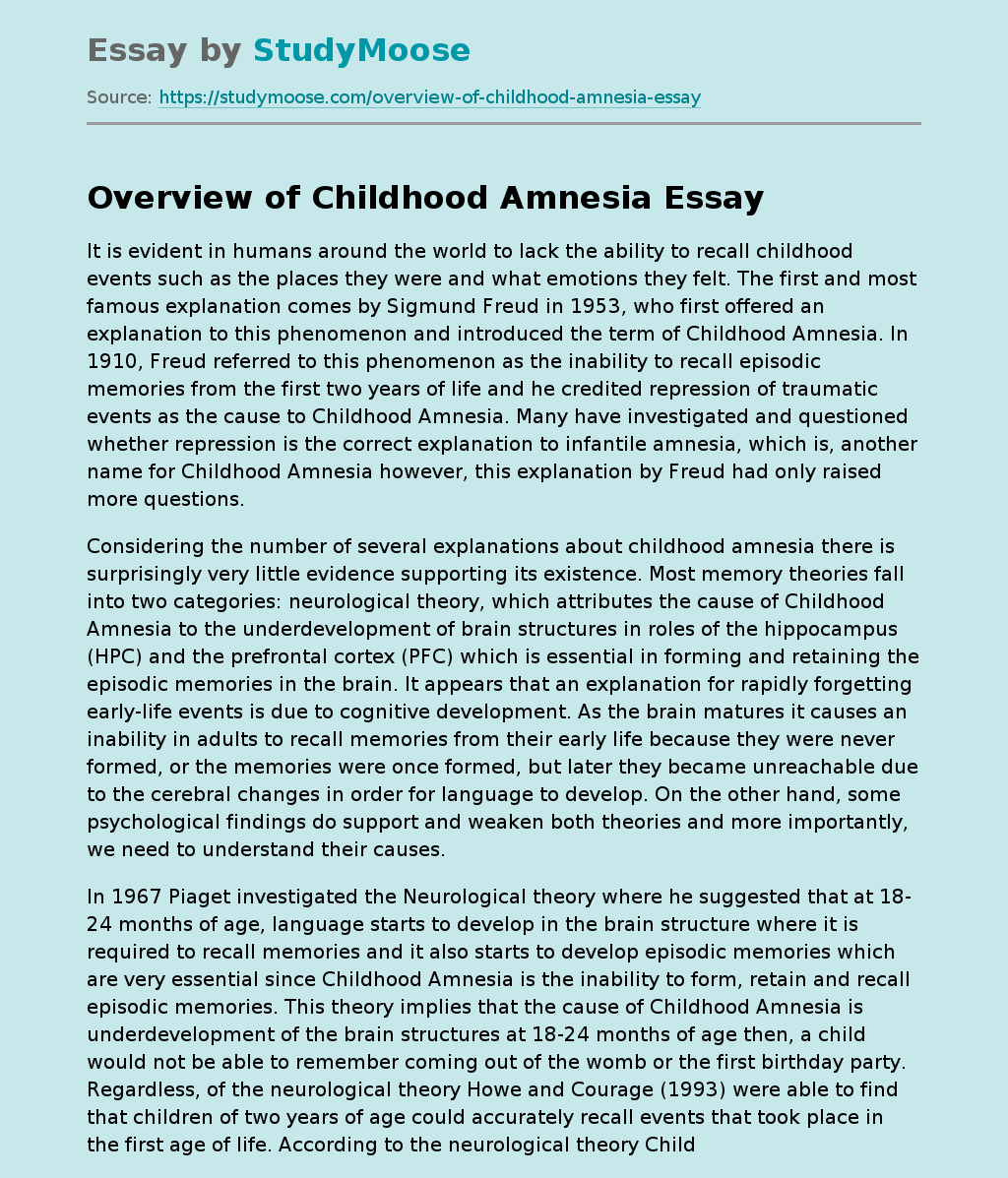