Animal Farm is an allegorical novella published by George Orwell in England on August 17,1945. This novel is about a group of farm animals that come together to evacuate the human farm owner because of how tired they were of him basically using them as slaves. Once they successfully evict the farm owner, they then take over the farm and make their own government with two pigs being their main leader. However, one thing turns to the other and eventually after some altercations amongst themselves, one pig turns into their leader and rules a dictatorship-type government.

Don't use plagiarized sources. Get your custom essay on
“ Overview of “Animal Farm” by George Orwel ”
Get custom paper
NEW! smart matching with writer

As a result, things in the farm begin to take a toll as there is a lot of problems between the animals in that small community and eventually everything in that farm turns out to be much worse than what they started with. Animal Farm symbolizes the events that led up to the Russian Revolution in 1917 and to the later events that led up to the ruling of Joseph Stalin in the Soviet Union or the “Stalinist Era.

” The allegorical novella portrays many political leaders and the citizens of Russia and the Soviet Union as being represented by a group of farm animals. George Orwell wisely shows in this novel how there was a lot of betrayal in between the animals, which again, were the political leaders and citizens involved in the Russian Revolution and the Stalinist Era, by showing how some once-allies quickly turned into enemies all because of the focus that they each had on having the most power that they could attain.

George Orwell also symbolizes in this novel how everything was once going great amongst the animals in the farm, but then political power and disagreements led to the downfall of their land and government just like how the Russian and the Soviet Union governments had a downfall of their own.

The Animal Farm itself obviously represented the Soviet Union and Russia under the communist rule of Joseph Stalin. It included its citizens, which were the common animals, that were all hypnotized by the Seven Commandments which reminded them to stay loyal to their customs no matter the circumstance. The Seven Commandments were a set of rules that had to be followed by each member of the farm and they could never be broken. Just like the Animal Farm had the Seven Commandments, all those under the rule of Joseph Stalin had to follow the rules and customs of communism when living in that territory. On the Barn, where the Seven Commandments were painted on, there was a lot of revising and editing that was done to the Seven Commandments. The Seven Commandments were ordered to be change by Napoleon himself in order to increase his power so that he could do illegal acts with no one to complain about since they were written in the barn. Napoleon was able to change the whole history that the animals had because of the unbelievable power that he had with the nine dogs that would cause fear all around the farm. Napoleon could not be touched by any of the animals and changing the Seven Commandments clearly proved it. Joseph Stalin indeed did change the political history that Russia and the Soviet Union had in order to make life easier for him and to attain higher power. Speaking of the topic of power, public projects was a main task the Joseph Stalin would create because of the benefits that he would receive economically, eventually converting into his own power. Despite of all the urgency of food and shelter that the citizens cried for, Joseph Stalin ignored all of those cries and had tunnel vision on his own power. Likewise, Napoleon did not care what the other animals thought of the project of building the windmill because he knew that in the end, the windmill would cause him to have more power and have more wealth. Napoleon was a cruel leader because he felt unstoppable and because of his selfishness, all of the animals in that farm hated him as a leader. Eventually, that selfishness would turn against Napoleon when the farm was attacked by another neighboring farmer and everything in the Animal Farm went downhill after that occasion. Joseph Stalin was hated all around the world, especially by his people because of how self-minded he was and how he did not consider the people’s opinions. Although Joseph Stalin did save his country from the Nazi invasion, he is still remembered as a cruel leader because of his terrorist ways of getting tasks done. That proves that in order to be looked as an astounding leader, you have to contribute to your people for they are the number one asset when ruling a region.

All in all, George Orwell did an amazing job at analogizing the Animal Farm to Russia and the Soviet Union in this allegorical novel. George Orwell made it much easier to understand just how cruel Joseph Stalin was when leading by making it the simplest way possible by analogizing it with a group of farm animals. Orwell was a genius in the way he perfectly depicts the animals to match the political figure that they each represent. Each animal in the novel had a big role to play, so George Orwell did it with such detail in order to illustrate just how each political figure actually was in real life. It is known that George Orwell was a socialist himself, which is what Joseph Stalin ran with when he was ruling, but he did state that Joseph Stalin learned the ways of socialism in a terrible and violent manner that was not necessary at all for him to reach his goals. “In his preface to Animal Farm, Orwell says: ‘It was the utmost importance to me that people in western Europe should see the Soviet regime for what it really was. Since 1930 I had seen little evidence that the USSR was progressing towards anything that one could truly call socialism.’'(Miller). George Orwell did an amazing job by making sure that people up to this day stay aware of how just cruel Joseph Stalin was despite of him being able to keep his country from being invaded by the Nazis. When writing Animal Farm with such cleverness, George Orwell spoke his heart out and was able to make it known that Joseph Stalin should never be looked as a good leader because no man that was responsible for the deaths of many innocent people, should be looked at positively. 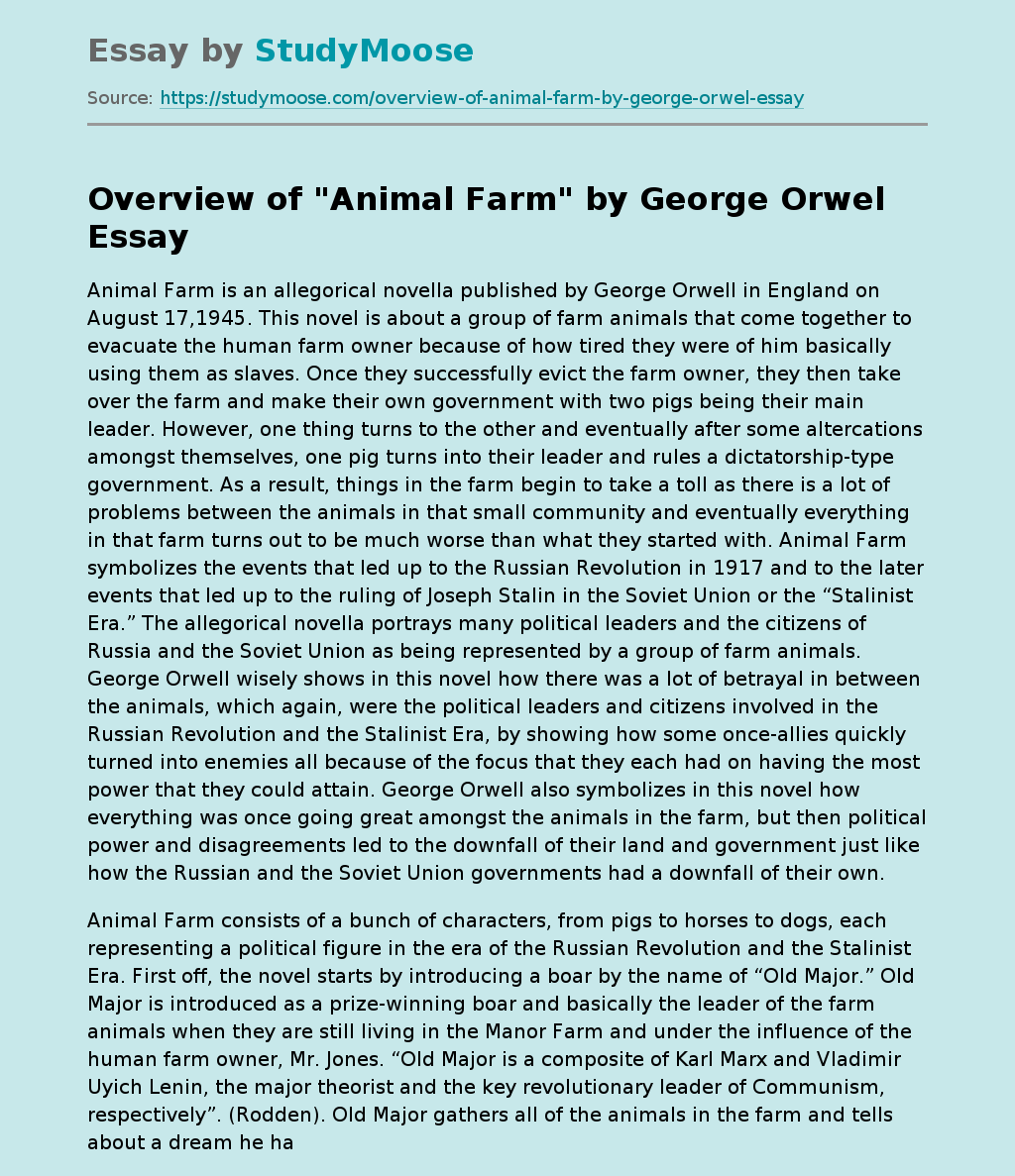