Overpopulation In The Philippines

Don't use plagiarized sources.
Get Your Custom Essay on Overpopulation In The Philippines Just from $13,9/Page

The growth rate is so high that now three babies a minute are being born.

-After its period under the Spanish empire the main religion in the Philippines is Catholic, this means that under their religion contraception is forbidden to be used. This leads to a higher birth-rate due to the lack of contraception used.

-The level of education is extremely poor, especially on contraception and sexual education. This is not helped by the Roman Catholic Church who are against contraceptives.

-The government refuse to provide free birth controls for its citizens.
-The country is also in turmoil, its church is very powerful (Catholic)

-Food shortages, shortage of housing leading to high density slums which spread disease quicker also increasing poverty. Unemployment is high as well as a depletion in resources. -Despite its economic growth, this still hasn’t translated into a higher employment rate.

-Low GDP as low food amounts, to stop this governments may have to rely on foreign debt -With high unemployment meaning that there is more economic strain on those that are in work. -The Philippines ranks in one of the worst countries by the World Bank of starting a business. This means that the government don’t collect enough income tax meaning they cannot improve the infrastructure and other aspects of the areas. -There are a high number of Filipinos working abroad, there is a worry that these may be returning to the country, where will they live? Another problem with this is that these Filipinos with businesses take them elsewhere to prosper as in the Philippine sit is hard to start it up.

-Typhoon’s, destroy crops and housing causing shanty town populations to increase rapidly.
-Higher pollution levels from the shanty towns, despite people picking out valuables through rubbish and selling them on.

Overpopulation In The Philippines. (2016, Sep 15). Retrieved from https://studymoose.com/overpopulation-in-the-philippines-essay 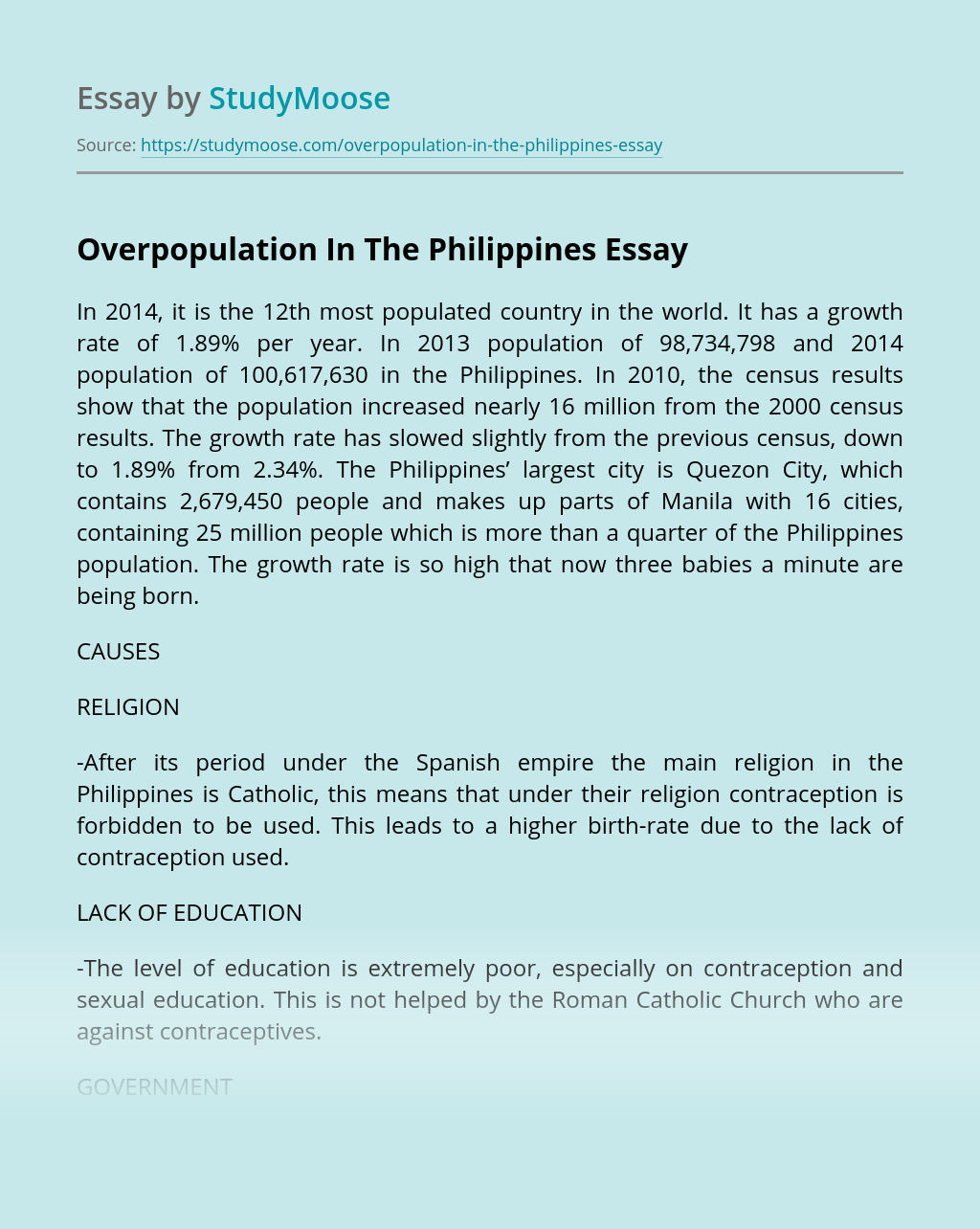 View sample
Bsed in Social Studies in the Philippines

View sample
Get Essay
Was Magellan Worth Defending?

A man suffering attack under foreigners. A crew of men willingly watching their captains death. Ferdinand Magellan was a Portuguese explorer who was the captain of a fleet granted by spain in the year of 1519. Magellan took his fleet on a journey to circumnavigate the world on a mission to find a new trade...

In general, Filipinos are known to be food lovers. This results in varieties of recipes that were either borrowed or produced. And among these is one of the most popular Filipino dishes named “Kare-kare”. But why “Kare-kare”? What does it possess that others are lacking? Well, to know the reason behind this, let me bring...

View sample
Lesson Plan in I Am a Filipino

This lesson allows you to begin your journey into understanding yourself as a Filipino which will hopefully lead you to mastering yourself. You will know about the desirable traits of a true Filipino. It will help you answer questions about your role and duties as a citizen of this country. You must aim to: 1....