The book and the movie of the Outsiders are two very different stories. The book has so much more detail then the movie. The movie is not the most detailed but it does get its point across. There are may similarities and also many differences between the two the book is by far more interesting and more detailed then the movie. I enjoyed the book a lot and the movies a lot but the movie was missing a lot. A few similarities between the movie and book are that the movie still has the complete Greaser gang Pony, Johnny, Soda, Darry, Dally, Two-Bit and Steve.

Don't use plagiarized sources. Get your custom essay on
“ Outsiders Book and Movie Comparison ”
Get custom paper
NEW! smart matching with writer

They still have some of the more sad part like when Johnny and Dally die. There is still lots of conflict between the Greasers and the Soc’s. There is still the situation where Johnny kills one of the Soc’s and Johnny and Ponyboy both skip town. They still go to the church and hide out for 5 days.

The church that Ponyboy and Johnny run away to isn’t on a hill it is just out there. The movie also never mentions sodapops girl friend. In the book Soda gives Ponyboy money while in the book he didn’t. Also the book was written in Ponyboy’s perspective and the movie was not, the movie was written in everyone’s perspective. In the Movie the Socs were from the South instead of the West. Ponyboy doesn’t smoke as much in the movie as they said so in the book. Ponyboy Curtis in the fourteen-year-old boy that explains the story in both the book and the movie, and also the youngest of the greasers.

Ponyboy is ery intelligent compared to the rest of the gang he is most defenatly the smartest to them all. Because his parents have died in a car accident, Ponyboy lives with his two brothers Darry and Sodapop in both the book and movie. Darry repeatedly accuses Ponyboy of lacking common sense in the book more so then in the movie, but Ponyboy is a much brighter then his brother takes him for. Throughout the novel, Ponyboy struggles with class division, violence, innocence, and familial love but in the movie they dont focus on his school as much. He matures over the course of the book and the movie both.

Darrel Curtis Ponyboy’s oldest brother. Darrel, known as “Darry,” both in the book and in the movie. He is a twenty-year-old greaser who is raising Ponyboy because their parents have died in a car crash. Strong, athletic, and intelligent, Darry has quit school in the book and in the movie. He works two jobs to hold the family together. One of the leader of the greasers, he becomes an parent role model for Ponyboy. He also makes good chocolate cake, which he and his brothers eat every day for breakfast in the book but the movie really does not mention it. The other greasers call him “Superman. ”

Sodapop Curtis Ponyboy’s fun, intergetic, handsome brother. Sodapop is the middle Curtis boy. Ponyboy admires Sodapop’s good looks and charm. Sodapop is really a great person in both the book and the movie his plans are to marry Sandy , a greaser girl. Two-Bit Mathews The joker of Ponyboy’s group. Two-Bit, whose real name is Keith, is a wise-cracking greaser who regularly shoplift he gets in trouble a lot more in the movie more so then in the book. He loves his sleek black-handled switchblade so much in both the book and the movie. Dallas Winston the toughest hood in Ponyboy’s group of greasers.

Like the other greaser girls, Sandy only is shown in the book and the movie when the boys mention her. Cherry Valance Bob’s girlfriend, she is a Soc cheerleader. When one night Ponyboy meets her at the movies in both the book and the movie. Cherry’s real name is Sheri, but people call her Cherry because of her red hair. Ponyboy and Cherry have so much in common, and Ponyboy feels comfortable talking to her more so mentioned in the book then in the movie. This is why I say the book of the Outsiders is far better then the movie. The movie is missing lots of detail and the book is far more interesting then the movie.

Outsiders Book and Movie Comparison. (2021, May 04). Retrieved from http://studymoose.com/outsiders-book-and-movie-comparison-essay 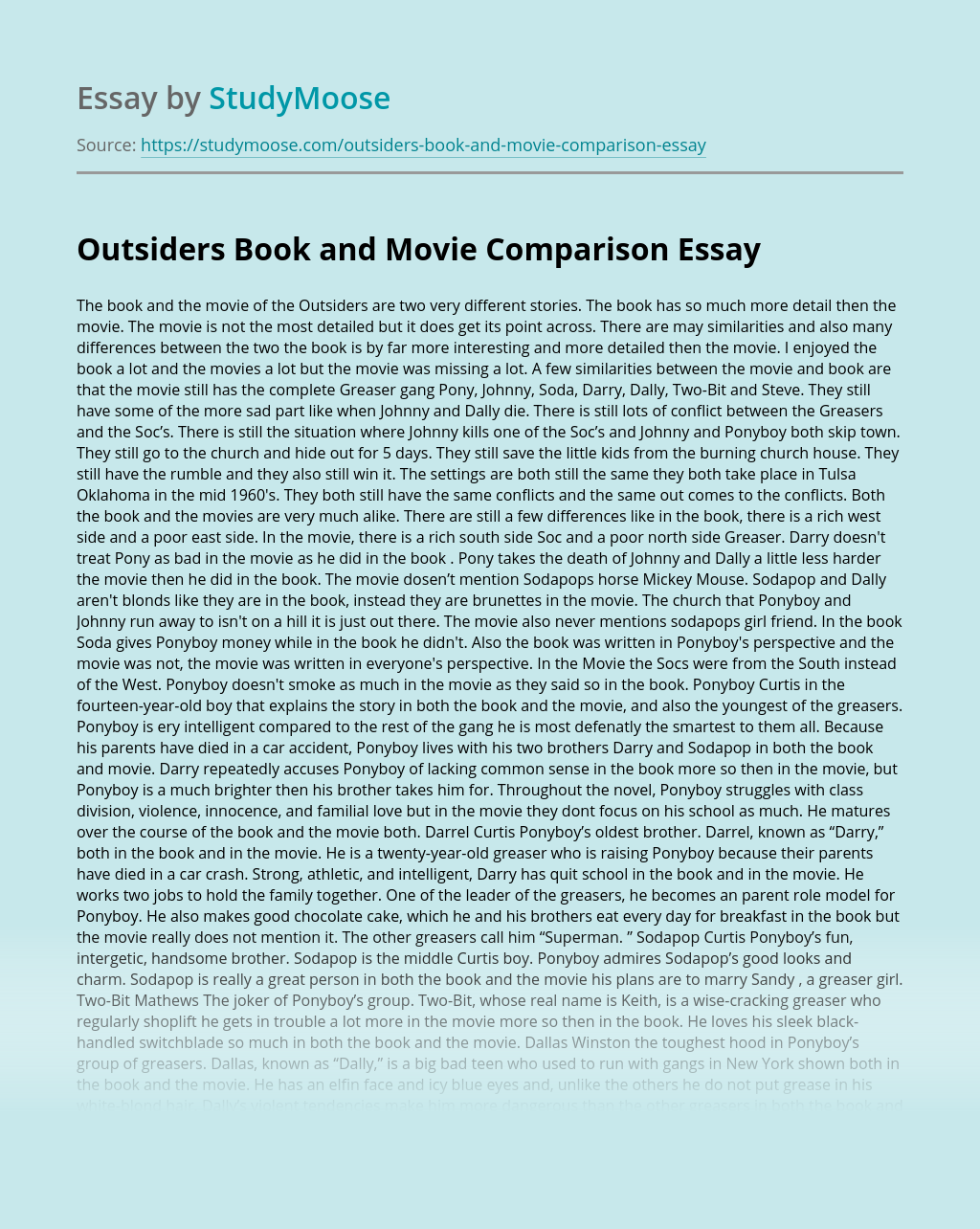