Outline the different forms of verbal and non-verbal communication

Don't use plagiarized sources. Get your custom essay on
“ Outline the different forms of verbal and non-verbal communication ”
Get custom paper
NEW! smart matching with writer

Appearance includes the speaker, clothing, hairstyle, neatness and use of cosmetics, more-so, surrounding and furnishings. Body language includes facial expressions, gestures and postures. Sounds includes voice tone, volume and speech rate. According to Martes (2011) forms of non-verbal communication are classified in seven types which are kinesics, proxemics, physical appearance, haptics or use of touch, vocalics or use of voice, chronemics or use of time, artifacts or use of objects. Martes’s theory argues that kinesics or body activity can be with the use of eye contact, facial expressions, gesture, and posture. Eye contact is the way we look with people whom we are communicating. This shows paying attention. Facial expressions are important in conveying message to show our emotions. Gestures are the movements of our arms, hands, and fingers to describe or to give emphasis. Posture is the position of our body; it is also a way of paying attention hence kinesics involves more body activity. In-addition proxemics or the use of space shows nonverbal communication. Intimate distance for private conversations of close friends, Personal distance for casual conversations, Social distance for impersonal business, and Public distance for public speeches hence by one distancing themselves from others shows a difference of interests. Also, physical appearance is also another form of non-verbal communication. Choice of clothing and personal grooming also communicate a message.

The message one wants to send is determined on how he/she dresses and grooms themselves. People have a choice to choose which clothing styles and grooming behaviours they want but it should be accordingly. Haptics or use of touch also communicates as a non-verbal form. People communicate through touch by the use of hands. Hands can be used to hug slap, kiss, pat, hold, embrace, stroke and tickle. With these, a message in variety of meanings is conveyed. Touch can be gentle and firm depending on how it is done for which purpose. Vocalics or use of voice is also known as paralanguage. This is a nonverbal sound of what is heard or how something is being said. It has 4 vocals characteristics: pitch volume, rate and quality. The presence of vocal interferences or extraneous sounds interrupts a conversation of fluent speech. The use of time also known as chronemics also conveys meaning. Duration is the time regarded as appropriate for certain events or activities. Activity refers to what people perceive should be done in a given time period. Punctuality is the extent to which one adheres strictly to the appointed or regular time thus a message can be trusted or regarded reliable through the duration, activity and punctuality aspects respectivitly.

Outline the different forms of verbal and non-verbal communication. (2016, Mar 06). Retrieved from https://studymoose.com/outline-the-different-forms-of-verbal-and-non-verbal-communication-essay 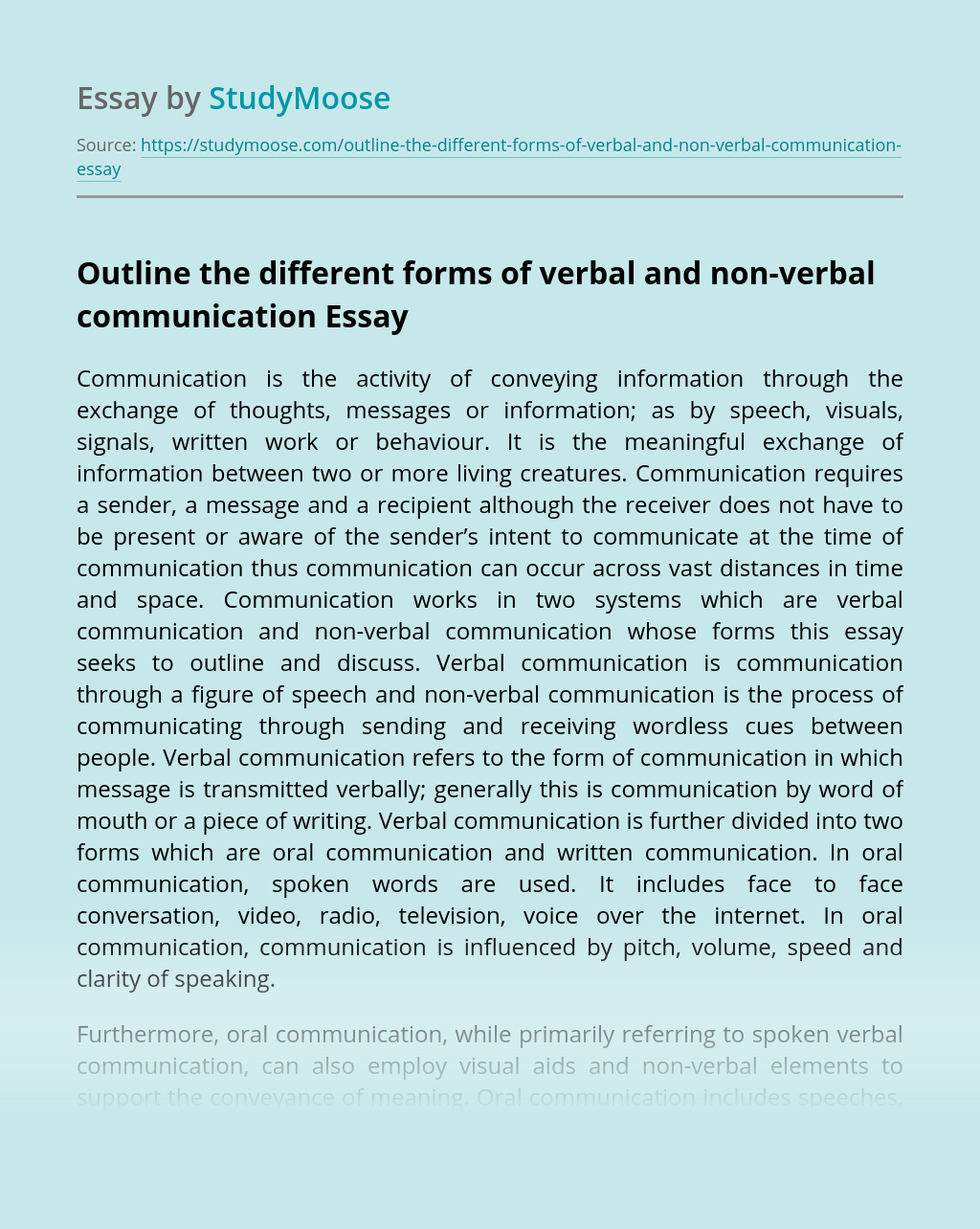