Thesis: Michael Jordan was the greatest basketball player in the NBA.
I. Michael Jordan played NBA, known as National basketball Association
A. He played for the Chicago Bulls
B. He led the Bulls 6 championship rings
C. Jordan was named the greatest North American athlete of the 20th century by ESPN.
II. Jordan was known across the USA.
A. He was 2nd to Babe Ruth on the Associated Press’s list of athletes of the century.
B. He made Nike’s Air Jordan sneakers really successful, which were introduced in 1985 and remain popular today.

Don't use plagiarized sources. Get your custom essay on
“ Outline of Michael Jordan ”
Get custom paper
NEW! smart matching with writer

III. Jordan was hated by his own players.
A. By several veteran players, led by Isaiah Thomas, were upset by the amount of attention Jordan was receiving.
B. Those players made a freeze-out, which mean they wouldn’t pass Jordan the ball.

IV. Jordan caught the eye of tons of fans and players.
A. Jordan’s leaping ability, illustrated by performing slam dunks from the free throw line in slam dunk contests, earned him the nicknames “Air Jordan” and “His Airiness”.

B. Jordan retired with 32,292 points in regular season play.

V. Jordan goals as a teen/an as a man

VI. Jordan brought the excitement to the NBA.
A. His goal was to make his varsity basketball team and to grow in height be better at basketball. B. His goal as a man in the NBA was to play hard while having fun, and becoming number one. C. Jordan’s dunks made the crowds jump out of their chairs with excitement.

D. He stated he plays the game competitive and not for the money and as a rookie he won MVP awards and player awards.

VII. How he change the NBA life?
A. He changes the bulls from being the underdogs to being a aggressive contenders for playoffs. B. His loyalty on the bulls was strong and in the NBA that no sportscaster has ever seen and looked for someone to fit his shoes.

VIII. Jordan Legacy
A. After Jordan scored a playoff record 63 points against the Boston Celtics in 1986, Celtics star Larry Bird described him as “God disguised as Michael Jordan B. In the September 1996 issue of Sport, which was the publication’s 50th anniversary issue, Jordan was named the greatest athlete of the past 50 years 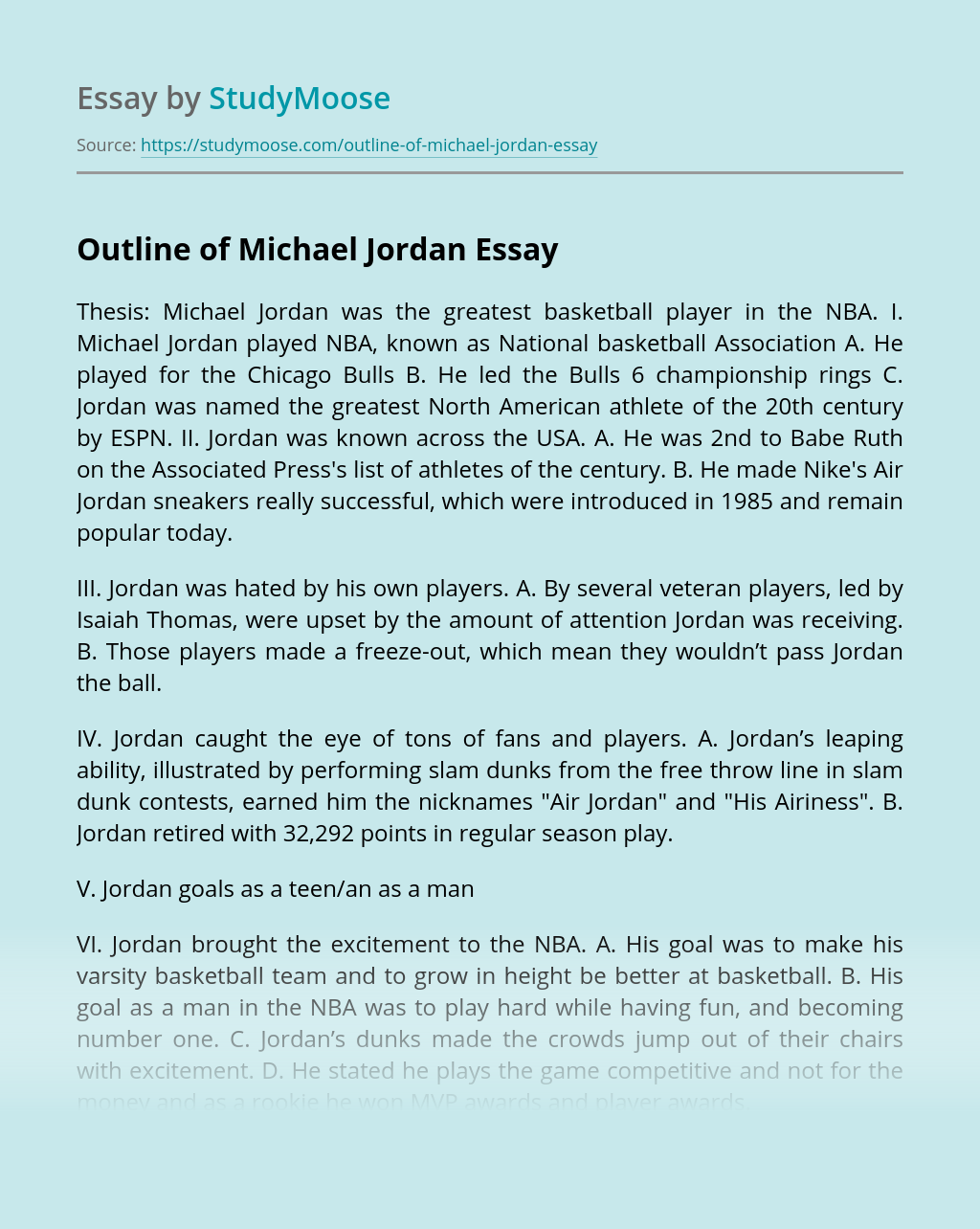