The Human Rights Act 1998 (also known as the Act or the HRA) came into force in the United Kingdom in October 2000. It is composed of a series of sections that have the effect of codifying the protections in the European Convention on Human Rights into UK law. All public bodies (such as courts, police, local governments, hospitals, publicly funded schools, and others) and other bodies carrying out public functions have to comply with the Convention rights.

Torture occurs when someone acting in an official capacity (for example a police officer or soldier) deliberately causes serious pain or suffering (physical or mental) to another person.

This might be to punish someone, or to intimidate or obtain information from them.

Public authorities are not allowed to inflict such treatment on individuals, and they must also protect them from this treatment where it comes from someone else. For example, if they know an individual is suffering inhumane or degrading treatment, they must intervene to stop it.

Inhuman treatment or punishment includes serious physical assaults, psychological interrogation, inhumane detention conditions or restraints, failing to give medical treatment or taking it away from a person with a serious illness and threatening to torture someone, if the threat is real and immediate.

Relating this to Winterbourne house, the staff must be aware that they must maintain the highest standards of care whilst making sure that they do not breach any of the legislation within the Human Rights Act.

This means that they must be able to find out if an individual is being abused within or out of the day centre. The Sexual Offences Act 2003: The Sexual Offences Act 2003 was passed with the aim of protecting vulnerable adults and children from sexual abuse and exploitation. A number of the Act’s provisions may be relevant to older people with mental health problems, including the introduction of a number of new offences to protect ‘at risk’ groups such as people with learning disabilities and other groups ith reduced capacity such as people with advanced dementia, strengthening the Sex Offenders Register to ensure that the location of people who have committed serious sex-related crimes are known to the police, addressing the fear of sexual crime and strengthening and clarifying the meaning of ‘non-consensual’ sex and overhauling the law on consent: the Act introduces a test of ‘reasonableness’ on consent and a list of circumstances in which it can be presumed that consent was very unlikely to have been given, e. g. hen the victim was asleep.

The sections of the Act covering offences committed against those who, because of a very profound mental disorder, lack the capacity to consent to sexual activity may be relevant to older people with a ‘mental disorder’ who are service users. The Act specifically recognises that whilst the vast majority of people working in the care professions act compassionately, it is clear that some unscrupulous individuals have taken advantage of their position to commit a ‘breach of a relationship of care’ by sexual abuse.

It is now an offence for those engaged in providing care, assistance or services to someone with a learning disability or mental disorder to engage in sexual activity with that person whether or not that person has the capacity to consent. However, this does not apply if the sexual relationship pre-dates the relationship of care: for example, where a spouse (or long-term partner) is caring for their partner following the onset of a mental disorder, e. . dementia, and continues to have a consensual sexual relationship with that person. Mental Health Act: The Mental Health Act 1996 is legislation for the care and treatment of persons with mental illnesses and for safeguarding their rights. Most people with mental illness can and do seek out treatment for their condition. The Mental Health Act is concerned with the small number of persons who cannot or who do not seek out treatment.

The main aspects of this act are that a person must be assumed to have capacity unless it is established that he lacks capacity, the person is not to be treated as unable to make a decision unless all practicable steps to help him to do so have been taken without success, a person is not to be treated as unable to make a decision simply because he makes an unwise decision, an act done or decision made, under this Act for or on behalf of a person who lacks capacity must be done, or made, in his best interests and before the act is done, or the decision is made, regard must be had to whether the purpose for which it is needed can be as effectively achieved in a way that is less restrictive of the person’s rights and freedom of action. In terms of Winterbourne house, the carers must ensure that any type of care they take which they have initiated themselves for the individual must be in the best interests of that individual.

It gives people with disabilities rights in the areas of employment, education, access to goods, facilities and services, including larger private clubs and transport services, buying or renting land or property, including making it easier for people with disabilities to rent property and for tenants to make disability-related adaptations, functions of public bodies, for example issuing of licences etc. Data protection act: The Data Protection Act controls how your personal information is used by organisations, businesses or the government. Everyone who is responsible for using data has to follow strict rules called ‘data protection principles’.

They must make sure the information is used fairly and lawfully, used for limited, specifically stated purposes, used in a way that is adequate, relevant and not excessive, accurate, kept for no longer than is absolutely necessary, handled according to people’s data protection rights, kept safe and secure and not transferred outside the UK without adequate protection. There is stronger legal protection for more sensitive information, such as ethnic background, political opinions, religious beliefs, health, sexual health and criminal records. Care standards act: The Care Standards Act 2000 is a piece of primary legislation, which established an independent regulatory body for England known as the National Care Standards Commission. Its remit covered social care, private and voluntary healthcare services.

In Wales, the Act provided for an arm of the National Assembly to be the regulatory body for the same services within that country. The principal purpose of the Act was to provide much needed reform of the care services sector within England and Wales. The Act itself defines the range of care services to include: residential care homes, nursing homes, children’s homes, domiciliary care agencies, fostering agencies, and voluntary adoption agencies, private and voluntary healthcare services – including private hospitals, clinics and private primary care premises. It also established equivalence between local authorities and the independent sector in meeting the same standards of care.

Race relations act: The Race Relations Act 1965 was the first legislation in the United Kingdom to address racial discrimination. The Act outlawed discrimination on the grounds of colour, race, or ethnic or national origins in public places. It also prompted the creation of The Race Relations Board (in 1966), to consider complaints under the Act. Safeguarding vulnerable groups act: The Safeguarding Vulnerable Groups legislation came about as a result of the recommendations of the Bichard enquiry following the Soham murders. The Safeguarding Vulnerable Groups (NI) Order 2007 aims to prevent unsuitable people from working (either paid or unpaid) with children or vulnerable adult.

It does this by vetting all those who wish to do such work vulnerable groups and barring those where the information shows they pose a risk of harm. The police act: This act ensures that employers have access to certain information about the individuals which they employ, ensuring they do not have a criminal record. In the past, it did not have to be disclosed whether or not an individual has a criminal record, however, when working with vulnerable adults it is important that it is disclosed and a check is made of the individual. The rehabilitation of offenders act: This is aimed at helping people who have been convicted of a criminal offence and who have not re-offended since.

Anyone who has been convicted of a criminal offence where the sentence was less than 2. 5 years in prison, benefits from the Act, so long as they are not convicted again during the ‘rehabilitation period’. Their conviction then becomes ‘spent’. It is the sentence imposed by the courts that counts, even if it is a suspended sentence, not the time actually spent in prison. Once a conviction is ‘spent’, the convicted person does not have to reveal it or admit its existence in most circumstances. However, there are two main exceptions which relate to people working with children or vulnerable adults. In these cases someone applying for a role is required to reveal all convictions, both spent and unspent. 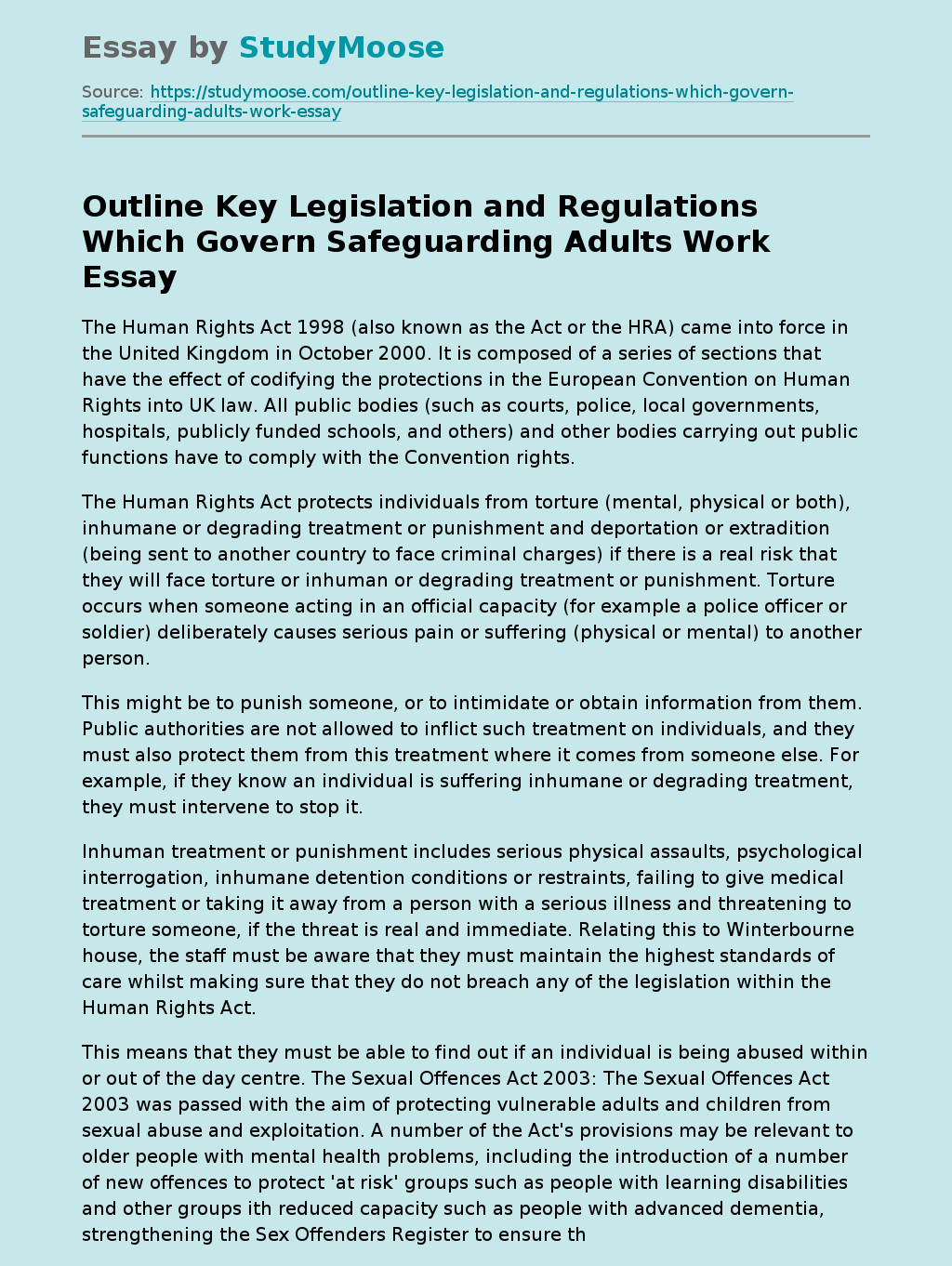