Outline and Evaluate One or More Explanations of Why People Obey

Outline and Evaluate one or more explanations of why people obey It has been found by Milgram that people obey for four main reasons these are; legitimate authority, the momentum of compliance, the agentic shift and passivity.

The first reason that Milgram found that people obey is because people feel like they have to obey someone if they have a high social status or a highly respected job, this is called legitimate authority. Bickman (1974) supported this theory by doing an experiment on the streets of New York.

Don't use plagiarized sources. Get your custom essay on
“ Outline and Evaluate One or More Explanations of Why People Obey ”
Get custom paper
NEW! smart matching with writer

Bickman had three men dress up as a policeman, a guard and a regular passerby in a shirt and tie, he then had the three men ask other passerby’s to either pay a parking fine or pick something of the floor, it was found that the policeman was generally obeyed more as he was of a highly respected profession and had legitimate authority. In Milgram’s study, the participants all obeyed the researcher because he was dressed in a lab coat with a clipboard to show his authority, but the setting of the experiment also gave the researcher authority as the setting was inside Yale University.

Another support experiment was done by Hofling.

Hofling found that obedience to authority is still very high as his study of the 22 nurses; all but one nurse obeyed the unknown doctor and went to administer double the allowed dose of an unknown drug. Rank and Jacobson questioned the validity of Hofling’s study for three main reasons; the first reason is that the drug the nurses were asked to administer was fictional, and it was unlikely the nurses had heard of it.

The second reason is that it would also have been very unlikely that the nurses would have not heard of the ‘unknown doctor’ as it was very unlikely that the nurses wouldn’t know all the doctors in the hospital. The third reason was that the ‘unknown doctor’ rang when the nurses were all alone on the ward, which would never have happened as they would never have been completely alone without anyone to ask or question about administering the drug. Rank and Jacobson re-did Hofling’s experiment this time without lacking validity and the number of obedient nurses dropped from 21/22 to 1/18 nurses.

The second reason people obey is called the momentum of compliance. Otherwise known as the ‘foot in the door’ technique, it is usually used by salesmen as they are trying to sell items, they start up with the smaller items and work their way up to the bigger, more costly items. Smith and Mackie (2003) found that similar processes take part in real-life crimes where criminals usually work their way up from smaller crimes to bigger, life threatening crimes. Milgram found that the momentum of compliance was found in his experiment, as the switches were going up in only 15v each time the participant started small and worked their way up to the bigger shocks and then without it actually hitting home, they’ve actually killed someone but they weren’t able to stop. Like the well-known Pringles saying ‘once you pop you can’t stop’.

The third reason for why people obey is when a person shifts from the autonomous state to the agentic state; this is called the agentic shift. Milgrams participants believed they were ‘just following orders’ and did not consider themselves responsible; his participants even sighed with relief when the experimenter said “I am responsible for what happens here.” Evidence from war criminals, has shown that Eichmann, who was trialled and found guilty for the Nazi war killings as he was the man who organized which camps the Jewish people would end up at, said “it wasn’t my fault, i was just following orders” this shows that Eichmann was very agentic as he believed that he did no wrong he was just following his orders.

Other studies from Hofling et al (1966) has shown that agentic people follow a hierarchy, they are responsible for the person above them, but not the people below them, this is shown in the Eichmann study as he was responsible to the people who were in charge of his actions but not the people who his actions harmed. In Milgram’s study the fact that his participants showed signs of stress and anxiety showed that they were in fact autonomous as they felt guilty for the things they were doing as they knew it was them pushing the buttons and not the people above them.

The fourth and final reason is that people have passivity, this means they will obey if means they don’t have to make a scene, this shows that they would rather agree to something that they know might have terrible consequences instead of starting arguments between groups of people. Cardwell (2001) found that the four reasons for obeying do not actually cover the motivational factors that are connected to motivation, Cardwell found that being obedient could have its own reward, this is shown by the German Nazi’s who gained jewellery from the Jewish people they killed as well as things like gold fillings or women’s hair to sell on for money, this shows that the Nazi’s didn’t just obey because they were agentic, but because they had some

personal gain. Also another flaw in the reasons for obeying is that many people that commit crimes have used the fact that the victim should be the one blamed as they ‘deserved it’ or they made them do it. This is so the person committing the crime has some self justification. The last flaw is that the theory doesn’t consider the role of inter-group hostility, this means that people in different social groups that do not or didn’t get along.

For example, the Nazi Germans didn’t like the Jewish community as they believed they were stealing all of Germany’s wealth, this created many problems which ended in millions of Jewish people being executed so that Germany’s wealth could stay in Germany. This was a major flaw in the Milgram study as the people who participated in the study were all of the same race, gender and ages, meaning they wouldn’t have any inter group hostility with people from their own background.

Outline and Evaluate One or More Explanations of Why People Obey. (2017, Jan 10). Retrieved from https://studymoose.com/outline-and-evaluate-one-or-more-explanations-of-why-people-obey-essay 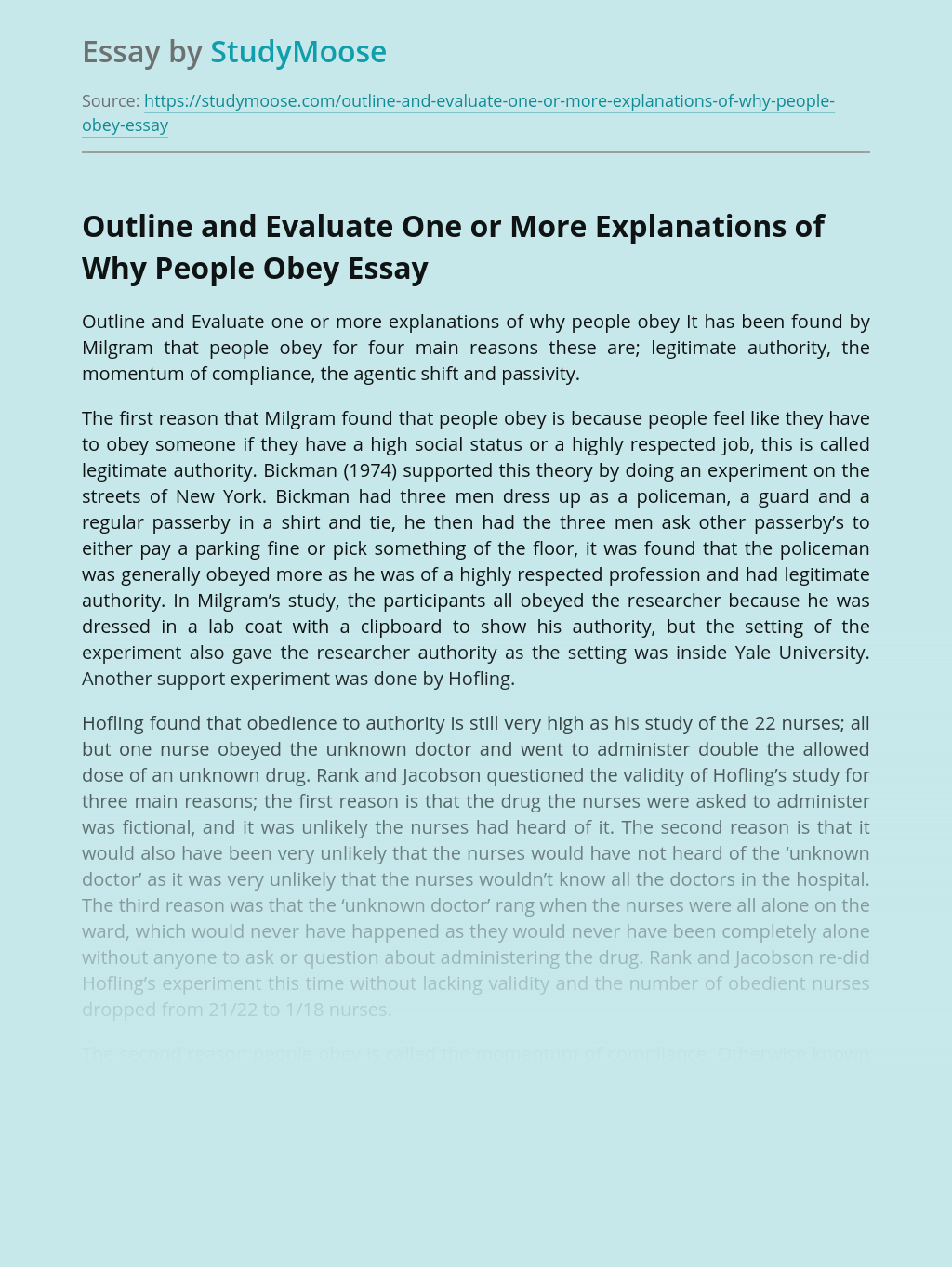