Outline and essay of Thomas Jefferson

II. A. Education- Was sent to Dover, Virginia, where he studied Latin with Reverend William Douglas until 1757. He was then sent to the school of the Reverend James Maury at Hanover, Virginia, and spent two years studying Greek and Latin classics, history, literature, geography, and natural science. In March 1760 Jefferson entered the College of William and Mary. B. Occupational Background- 1767- Jefferson admitted to the practice of law and became a successful lawyer. Also supervised the Shadwell Plantation.

Don't use plagiarized sources. Get your custom essay on
“ Outline and essay of Thomas Jefferson ”
Get custom paper
NEW! smart matching with writer

Was a member of the Virginia House of Burgesses. Took an active part in events that lead to the American Revolution. 1776- Jefferson took his seat in Congress as an elected delegate and wrote the Declaration of Independence. Served as Secretary of State under Washington and Vice president under Madison.

A. Louisiana Purchase (1803)- The Louisiana Territory was purchased for 15 million dollars from France. Doubled the size of U.S. secured navigation rights on the Mississippi River. Authorized purchase without making amendment, exercised the president’s implied powers to protect the nation.

D. Embargo Act (1807)- Stopped shipments of food and other American products to foreign ports. Many were thrown out of work because of it. Was created to maintain U.S. neutrality. Created as a short-term measure to prevent confrontation between American merchant vessels and British and French warships and to put pressure on France and England.

E. Non- Intercourse Act (1809)- passed by Jefferson in his last days of office. Reopened trade with all nations except Britain and France, and authorized the president to resume trade with Britain or France if either of them ceased to violate neutral rights.

A. Tripoli War (1801-05)- A conflict between the United States and Tripoli, incited by American refusal to continue payment of tribute to the piratical rulers of the North African Barbary States of Algiers, Tunis, Morocco, and Tripoli. Involved North Africa, was extension of fight about protection from
pirates in Barbary States.

D. Republicans attack the federalist judiciary (1804)- Republicans were making every effort to remove federalist judges from power. The house was unable to impeach Supreme Court Justice Samuel Chase. Preserved the Court’s independence and established the precedent that criminal actions were the only grounds for impeachment.

E. The Chesapeake Incident (1807)- British ship fired upon American ship that refused to be searched for deserters. Three Americans were killed, and eighteen wounded British seized four deserters, three were American citizens. Exposed American military weakness and increased the impact of impressments on the public. Would be the cause of Embargo Act.

A. People’s involvement in Politics increased. 90 percent of eligible voters cast ballots between 1804 and 1816. Political barbeques states, and new style of campaigning evolved.

1. Rembrandt Peale was one of most famous of first American artists. Was famous for his portraits of American presidents.

A. Robert Fulton’s invention the Steamboat, Clermont(1807) makes its debut

Thomas Jefferson was a fairly good president and receives an overall rating of 6.5. His decisions and ideas were sometimes wise and sometimes foolish.

Jefferson’s main goals were to restore government to its limited role, to extend the Republican’s power in the federal government, to establish republican virtues such as independence, self-reliance, and equality, and to reduce the National debt as much as possible. He also wanted to expand the nation and make it as powerful as possible. Like the presidents before him, he also wanted to maintain neutrality, undisturbed commerce, and no entangling alliances. Adams accomplished some of these goals. Initially, the national debt was decreased. Congress repealed all internal taxes, including the Whiskey Tax. Jefferson also declined to use the Alien and Sedition Acts against his opponents, and congress allowed both acts to expire. The Naturalization Act was also replaced with a much less severe one.

He refused to recognize any of the appointments Adams made in the last days of his presidency, and awarded vacant treasury and judicial offices to republicans. He succeeded in his goal and got rid of the old Federalist programs he didn’t like. As for expansion, the purchase of the Louisiana Territory allowed Jefferson to achieve exactly what he had dreamed of. It also prevented war with France, over the Mississippi River. Accomplishing this goal however, contradicted his goal of eliminating the National debt and strictly abiding by the Constitution.

Jefferson’s cabinet included Aaron Burr (1801) and George Clinton (1805-1809) as Vice president, James Madison as Secretary of State (1801-1809), Secretary of the Treasury Samuel Dexter (1801) and Albert Gallatin (1801-1809), Secretary of War Henry Dearborn (1801-1809), and Secretary of Navy Robert Smith(1801-1809). Albert Gallatin was one of Jefferson’s best appointments. Gallatin worked to help achieve Jefferson’s goals in National budget. He cut the army budget in half and reduced the 1802 Navy budget by two-thirds. Gallatin moved to reduce the national debt from 83 million to 57 million. Robert Smith also had a significant influence. He oversaw the Navy that blockaded Tripoli to win the Tripoli war and also forced the Algiers and Tunis to renounce attacks against Americans. The president chose his cabinet because he believed they were the most qualified and wanted to achieve the same things he did. This was true for the most part, and his cabinet was on his side.

The president and congress got along very well. The Republicans were in majority throughout his presidency so Jefferson had no problems with congress. When Jefferson declined using the Alien and Sedition Acts congress let them expire. Congress repealed the Naturalization Act, and created a new one that required less for citizenship. Congress also repealed the Judiciary Act of 1801, so Jefferson could appoint a Supreme Court member. Jefferson controlled congress through his leadership of the Republican Party. It was firmly on Jefferson’s side and did everything it could to further the republican interest.

Jefferson had to deal with domestic and foreign crises. The nations had built up a large debt, which could be called a crisis. Jefferson wanted to reduce the debt as much as possible. At first, he did do this by cutting funding. But with the purchase of the Louisiana Territory the debt only increased. In the seas, Jefferson was faced with a number of problems. Britain was practicing impressments. Senate passed the non-importation act but he suspended it in hopes of a negotiation settlement. Negotiations were unsuccessful so nothing changed. At the time the impressments of sailors wasn’t considered a crisis, but the Chesapeake affair made everyone aware. In reaction, Jefferson did not declare war, because he knew Britain had a superior Navy. Instead, he closed American waters to the British, and issued the Non-importation and Embargo Act. War may have been avoided, but by closing all American ports Jefferson created his own new crises. Smuggling resulted and the American economy plummeted.

By issuing the Embargo Act, he hurt his own nation more then his intended targets, Great Britain and France. Resentment was also created throughout New England, and talk of succession started. To deal with this crisis he created, Jefferson issued the Non-Intercourse Act. The new Act solved the problems created by the embargo, but didn’t prevent any of the same problems that prompted it. The issuing of these acts was by far the president’s greatest failure. Although it was a failure, some good did come out of it. America’s industries grew. Forbidden to trade, Americans had to make their own products. The Embargo precipitated the Industrial Revolution. For Jefferson, the crises he dealt with are ones he’d rather forget.

A minor crisis which Jefferson had to deal with was Aaron Burr’s conspiracy, the details of which are still unknown, either to establish an independent republic in the Louisiana Territory or to launch an invasion of Spanish-held Mexico. Jefferson acted swiftly to arrest Burr early in 1807 and brought him to trial for treason. Jefferson is not known as a good president for how he dealt with crises, it is the opposite. As for his accomplishments, the Louisiana Purchase was his greatest success. The territory was vast and benefited the nation in many ways. Not only was war avoided, but a mass amount of land was acquired. Navigation on the Mississippi River was also gained, which was extremely important for trade. This accomplishment was perhaps one of the greatest of any president and administration in American History.

Thomas Jefferson was greatly respected by the people of his day. He was well known as a revolutionary leader and as the author of the Declaration of Independence. He was also known and respected as the governor of Virginia. He truly served the people, and was the first president to lead a political party. Jefferson was a leader, and everyone who knew of him saw him as one.

Jefferson was frugal, simple, and fickle. From the beginning, Jefferson made it clear that he wanted to represent the average American, unlike the other presidents before him, he dressed plainly, even at his inauguration. He was frugal in that he cut spending as much as possible, internal taxes were reduced and the military budget was cut, with the exception of the Louisiana Purchase. He was fickle in that he did not hesitate in buying the Louisiana Territory, using Federal power. Jefferson was known to believe in strict interpretation of the Constitution and it did not state that the president had the authority to acquire new territory and integrate it into the nation.

The president and his administration influenced decisions made by future administrations. Jefferson’s decision to exercise the implied powers the president has to protect the nation set a precedent for future presidents. Many things Jefferson and his administration did also affected the lives of future generations. The purchase of the Louisiana territory would create a whole new group of people, called frontiersman. People would settle into the area and live new lives. Purchasing the territory, although causing further debt, was the best thing for the country. It would end up being an excellent investment. Jefferson’s embargo act, also had a dramatic affect on the future.

He did not know at the time, but the embargo Act would enhance America’s industries, and start a whole new trend. When the president made his decisions they were thought through, although not always good ones. The decisions Jefferson made in foreign affairs were mostly correct, because the nation was not ready for war and to stay neutral was the best thing. But Jefferson should have avoided war by using methods other than economic pressure. Jefferson was fairly-open minded and would listen to others. It’s hard to say precisely how open-minded he was, because his cabinet and congress agreed with him on just about everything.

Overall, Thomas Jefferson was a good president. Although his results were far from perfect at times, his intentions were good.

Outline and essay of Thomas Jefferson. (2016, Jun 25). Retrieved from https://studymoose.com/outline-and-essay-of-thomas-jefferson-essay 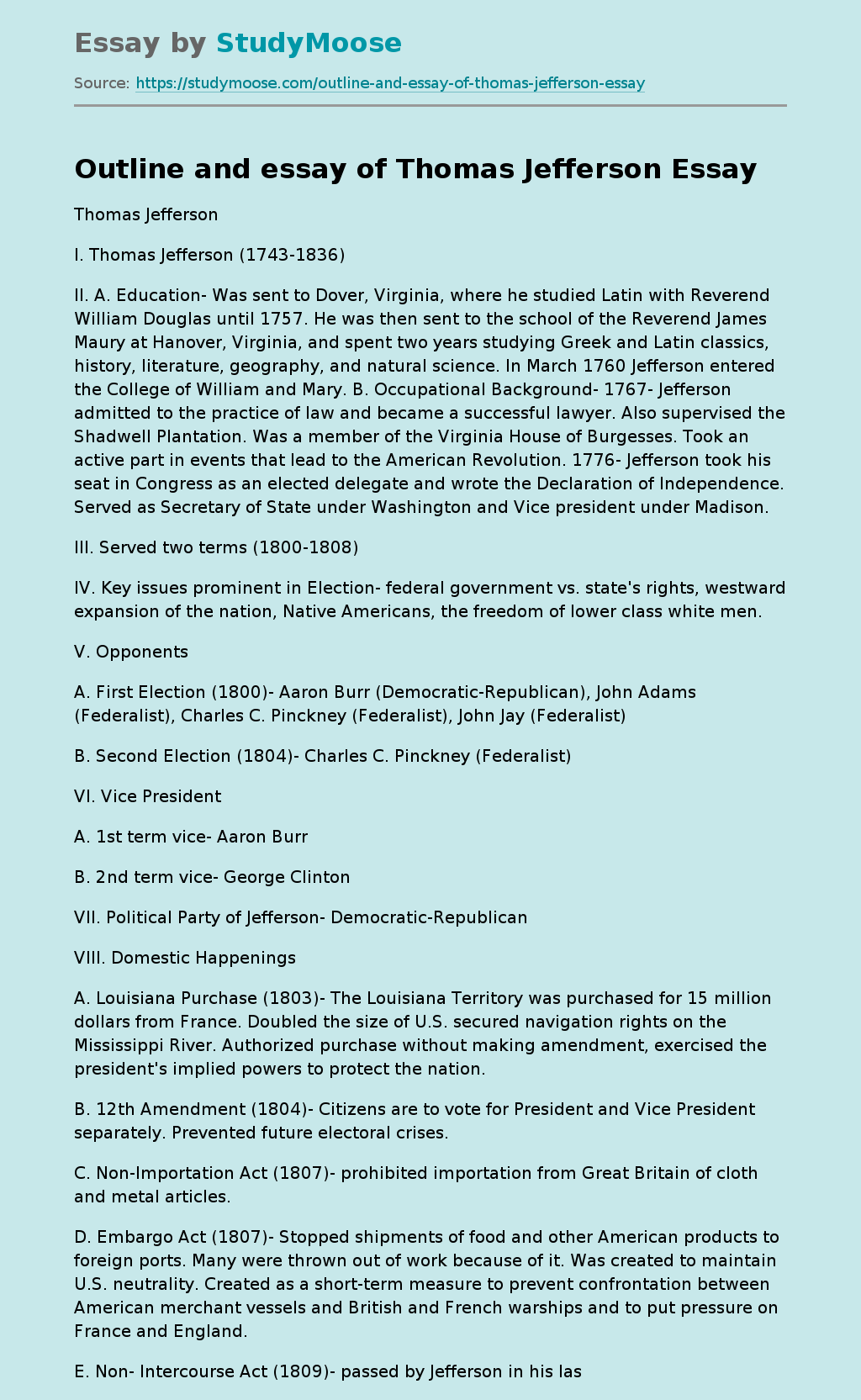