To what extent was Bismarck responsible for the unification of Germany in 1871 and account for the effect this had on the balance of power in Europe, any threats faced due to this imbalance and how Bismarck countered these threats. Otto von Bismarck, a charismatic diplomat and first chancellor of Germany, was one of the main driving forces behind the unification of the pre-German states. By opposing socialism and…… into the German Empire. His actions and results would usurp the balance of power in Europe and forever change the world.

Before 1871 Germany had been a collection of 39 independent states of varying sizes and power. The largest two states were Prussia and Austria; all of the states were ruled by kings or princes who guarded their power jealously. However since 1815 all the German states had been linked through the German Confederation. Otto Eduard Leopold, Duke of Lauenburg, Prince of Bismarck (1815-1898), or simply known as Otto von Bismarck was a Junker (Prussian nobleman) who held many positions in the Prussian and later the German parliament.

Bismarck’s loyalty to Prussia meant that at first not pursuing German nationalist aims with the intention of unifying Germany but rather to expand Prussia borders and to replace Austria as the dominate power. This loyalty gave Bismarck the drive he needed to make Prussia powerful, which was greatly responsible for Germany’s unification. In 1862 Bismarck became the 9th Minister President of the Kingdom of Prussia where he would be the King’s Chief Minister and would control the Prussian Landtag (the Prussian Parliament).

Bismarck achieved his aim by forcing Austria into a war with Germany in 1866 through the use of the Gastein Convention. When Austria asked the Bundestag (Federal Diet, as legislative body in Germany) to decide the future of the duchies Schleswig-Holstein, the Prussians proclaimed that it was a breach of the Gastein Convention and therefore was no longer bound to it and defeated Austria in the Austro-Prussian war. This victory gave Bismarck the power to demand Austria agree to some terms, which were listed in the Peace of Prague.

This treaty allowed Bismarck to manoeuvre Prussia into a position where it could unite Germany without Austria interfering. This clever ploy on Bismarck’s behalf was chiefly responsible for Prussia’s continued power. In the Peace of Prague Bismarck abolished the German Confederation and was replaced by a new North German Confederation from which Austria was excluded. This Confederation gave Bismarck and Prussia the power it needed to enforce its will throughout the land as the King of Prussia was given exclusive power over foreign policy, the military as well as the declarations of war and peace.

In the year 1866, Bismarck had needed Frances support for Prussia’s expansion, he had hinted to Napoleon III that he would not stand in the way of a French annexation of Luxemburg. By 1867 Napoleon III had gained consent of the Dutch King to buy Luxembourg as it was under the sovereignty of Holland. When Napoleons intensions became known in Germany the states made a national outcry against the action. The reason for the outcry was that Luxembourg had a mainly German speaking population and a small Prussian garrison. At first Bismarck was reluctant to stop France but was forced to by the popular reaction in Germany.

Bismarck was however able to turn the situation into an advantage for Prussia. Bismarck used the threat of a French attack to play on the patriotism of the Reichstag (German Parliament) members to persuade them to pass his proposal on the military budget. This perfect use of the situation allowed Bismarck to further the unification of Germany. Bismarck revealed to France the existence of secret military alliances between Prussia and the south German states. Finding no support in Europe Napoleon III agreed to a conference of powers to resolve the issue.

The outcome was that Luxembourg was granted independence and the Prussian garrison was withdrawn. Bismarck was once again responsible for furthering the unification of Germany as many people agreed with his actions. The greatest affect that an action of Bismarck had on Germany’s unification was the Ems telegram. This telegram was an account of a meeting between the French Ambassador and the King of Prussia, in which the ambassador demanded that Prussia would renew its candidature for the Spanish throne. Bismarck published an edited version of the event in which the French ambassador had been insulted by the King.

This publication was the final straw for France and it declared war on Prussia. The ensuing Franco-Prussian war would unleash a wave of popular patriotism across Germany which put pressure on the rulers of the southern states to unite with the North German Confederation. After some complex and skilful negotiation, Bismarck succeeded in bringing the south German states into the fold and on January, 18th 1871, in the Hall of Mirrors at Versailles, the new German Reich proclaimed the King of Prussia as its Kaiser (Emperor). Bismarck had succeeded in uniting the various German states into one combined nation.

The founding of the modern German Empire was a dramatic change deeply felt all over Europe. It caused misgivings among the older powers (England, Russia, etc) and stimulated their resolve to build up their strength in order to maintain their power in Europe. The greatest danger that the new German Reich was an attack from one of its defeated opponents, either Austria-Hungary or France. This danger meant that Bismarck, who was now the first Chancellor of Germany, would have to direct his diplomacy skills to avoiding war and keeping France “isolated”. Bismarck was able to counter these threats with relative ease.

Bismarck’s situation was favourable because in 1971 France was still recovering from its defeat and the Austro-Hungarian Empire was also beginning to shift its interests away from Germany. After the Russo-Turkish War, Germany was blamed for Russia’s loss in total territory gained in the Balkans and Germany was forced to find another ally. Bismarck turned towards Austria-Hungary for an alliance and after several weeks of debate with the Kaiser William I, Bismarck signed the treaty with Count Andrassy forming the Austro-German Alliance on October 7th, 1879, and this would last until 1918.

This use of diplomacy by Bismarck secured Germany an ally that she could count on if threatened. Among other treaties Germany, or more to the extent Bismarck, wanted to keep ties with Russia open and friendly and to reduce the tensions going on between the Austria-Hungarian Empire and Russia. Bismarck achieved this through the Three Emperors League in 1881. This league was a more specific version than the 1873 alliance. This alliance gave Germany the protection it needed as the treaty would make Austria-Hungary and Russia neutral if another were to attack. This meant Germany that France could find few allies on mainland Europe.

Otto von Bismarck, 9th Minister President of Prussia, 1st Chancellor of Germany, was able to bring about the unification of Germany’s individual states through the use of superior diplomacy and taking advantage of every event that occurred. Through three wars Bismarck formed the new German Reich and after its formation once again used his skills to solidify its position in Europe. Despite the aggression of “older” powers, Bismarck was able to create several alliances that would keep Germany safe and allow her to prosper. It was only until Bismarck’s forced resignation was Germany in ever any real danger. 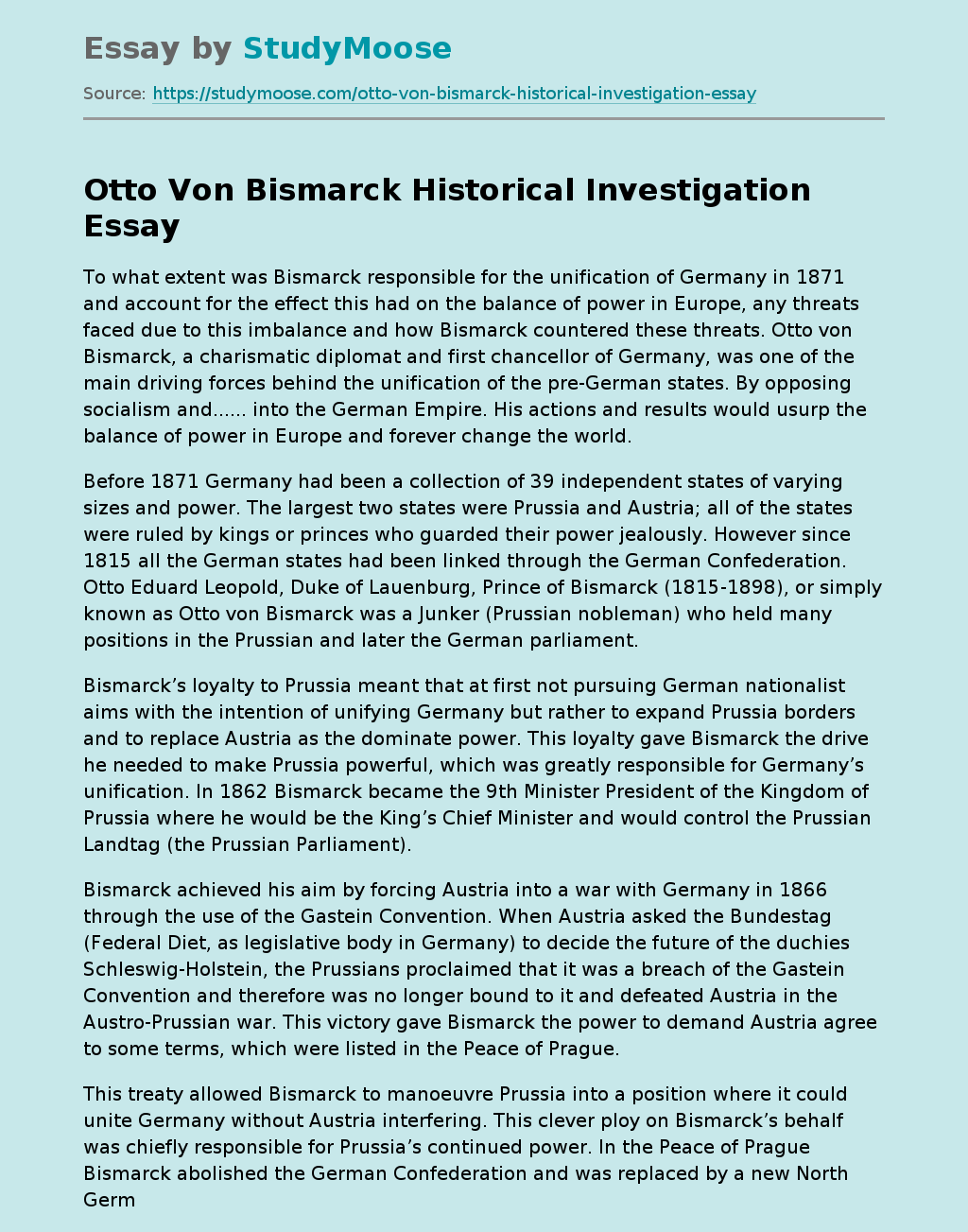