Why does Iago hate Othello?
Because Othello made Cassio his lieutenant, instead of Iago
Why does Iago choose to stay under Othello’s command?
To get back at Othello
Does Brabantio like Roderigo at first? Why or why not?
No, because Roderigo has spent the last few years trying to make Brabantio let him marry his daughter Desdemona
What does Brabantio think made his daughter run of with Othello?
He says that Othello enchanted her
What character traits does Othello have?
1) Leadership
2) Truthfulness
3) Humility
What made Desdemona fall in love with Othello?
His stories
Why does the Duke suggest that Desdemona should stay behind while Othello fought the Turks?
Because she would be useless
Who does Othello leave in charge of Desdemona, while he fights off the Turks?
Iago
What is Roderigo going to do now that he knows Desdemona is married to another?
He says he is going to go drown himself
How is Othello respected?
He is respected with authority
What happened to the Turkish fleet?
They were destroyed in the storm
Iago tells Roderigo to do what with Cassio?
Fight
When Iago invites Cassio to drink and celebrate, what is Cassio’s initial response?
Cassio says he doesn’t have happy brains for drinking, meaning he doesn’t drink
What makes Cassio offended and start fighting with Montano?
Montano calling Cassio drunk
What does Othello do when he finds out Cassio started the fight?
He removes Cassio from his position as lieutenant
How does Cassio react to being removed from his position?
He is upset because his reputation is ruined
What does Cassio do to try and get his position back?
He talks to Desdemona and asks her if she can talk to Othello on his behalf
What two seeds does Iago start to plant in Othello’s mind?
1) Jealousy
2) Doubt
Who takes Desdemona’s handkerchief?
Emilia
Does Emilia know what Iago plans to do with Desdemona’s handkerchief? Why does she give it to him?
No, she wants to please her husband’s fancy
What visual proof does Iago show Othello, that proves Cassio and Desdemona are having a affair?
The handkerchief
At the end of Act III, scene 3 what does Othello do?
He makes Iago his lieutenant
Why is the handkerchief so important to Othello?
It was his mother’s
What does Cassio do with the handkerchief he found?
He gives it to Bianca (his girlfriend)
Is Othello’s handkerchief really magic?
Yes, because he believes it is
No, because it is not magic
What are two of Othello’s flaws?
1) Over-trusting
2) Not seeing the truth
How does Cassio feel about Bianca?
He likes her, but doesn’t want to marry her
Why does Othello hit Desdemona?
Because he is mad at her
What does Emilia say about Desdemona as a wife?
That she is honest and the purest of wives
Othello identifies his weakness – what character trait does he say he is lacking?
Patience
What does Desdemona ask of Iago?
She asks him why Othello called her a “*****”, also what she can do to win her lord again
What is Iago’s reaction when Emilia almost figures out what he is up to?
He calls her a fool and tells her to leave
Why is Roderigo mad at Iago for telling him to go to Cyprus?
Because it didn’t help him get any closer to winning Desdemona, also he is treating him unjustly
How does Iago use flattery with Roderigo?
He tells Roderigo that he is witty, courageous and valor
What does the “Willow Song” foreshadow?
That there is lady and someone is deceiving her and that soon somebody will blame the deceitful one
What would Iago gain from Roderigo’s death?
He wouldn’t have to worry about Roderigo finding out he lied to him, or that he was being unjust to him
What would Iago gain from Cassio’s death?
He wouldn’t have to worry about Cassio finding out what he had been doing and then Cassio telling Othello the truth
What happens when Roderigo attacks Cassio?
Roderigo misses Cassio, Cassio stabs Roderigo, and Iago stabs Cassio in the leg
What does Iago do after he stabs Cassio?
He leaves because he knows Othello will be around soon
Act V, scene 1 includes the first death of this tragedy. Who dies and how?
Roderigo dies and he dies because Iago stabs him, pretending to be on Cassio’s side
Why does Othello ask Desdemona if she has prayed tonight?
Because he is going to kill her, and he doesn’t want to kill her if she hadn’t repented of her sins
How does Othello kill Desdemona?
He smothers her
What interruption occurs while Othello is smothering Desdemona?
Emilia starts calling to Othello
What is Emilia’s reaction when Othello tells her that Iago had revealed Desdemona’s affair with Cassio to him?
Every time Othello said how good Iago was to tell him of this Emilia would reply with “my Husband?”
Whom does Desdemona blame for her death? Does Emilia believe her?
Herself
Emilia does not believe Desdemona because she had no reason to kill herself
What happens when Iago tells his wife not to speak and to go home, orders which good renaissance wives should follow without question?
She spills everything out to Othello, and Iago then kills her and runs away
What are the letters found on Roderigo about?
1) “the death of Cassio is to be undertook by Roderigo”
2) “Iago’s plans”
3) “Roderigo complaining about Cassio”
What justification does Othello try to give the murder of Desdemona?
He says that she was having an affair with Cassio, and the proof was that Cassio had Desdemona’s handkerchief
What does Othello tell Lodovico to write about “these unlucky deeds?”
He wants Lodovico to get straight to the point and not to sugar coat anything
What happens to Othello, Iago and Cassio in the end?
Othello kills himself
Iago is taken away to be tormented
Cassio becomes the governor of Cyprus (Othello’s position)
Darlene Gregory
Share 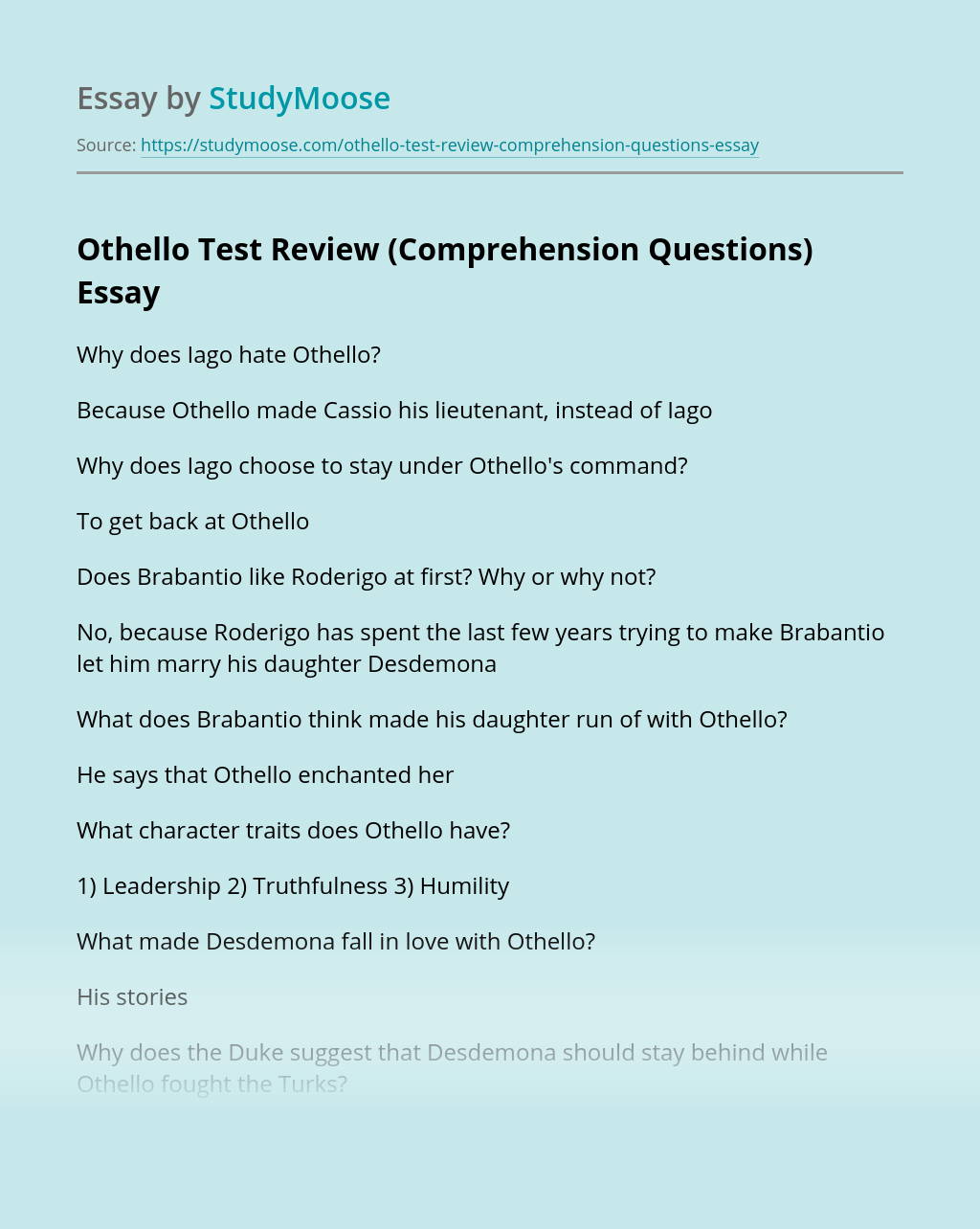