In Shakespeare’s play Othello the main character is Iago, although the play’s protagonist, at least during some points of the play is Othello. This paper will seek to examine the roles of Victorian stereotypes in the destruction of Othello’s character especially in the hoodwinking qualities of Iago in splitting up Desdemona and Othello The first scene of the play is set in the streets of Venice where Roderigo and Iago are in deep disagreement with what is later revealed to be a plot to destroy Othello’s marriage to Desdemona.

Don't use plagiarized sources.
Get Your Custom Essay on Othello & Racism Just from $13,9/Page

Othello is the object of hatred of both Roderigo and Iago, as Iago states, “Your heart is burst, you have lost half your soul; Even now, now, very now, an old black ram Is topping your white ewe. ” (Shakespeare I, I 97-9) Roderigo is especially racist toward Othello in the company of Iago, as Orkin states, “Roderigo too is proficient at racist insult…and falling upon the racist stereotype of lust-ridden black man when he calls to Brabantino that his daughter has given himself to the ‘gross clasps of a lascivious Moor’ (Shakespeare I.

The evil scheme is two-fold; one, to break up the marriage of Othello and Desdemona so that Roderigo can woo Desdemona and eventually make her fall in love with him, two, that Iago can finally have his revenge on Othello. Iago suspects that Othello has slept with his wife Emilia and he detests Othello for passing him over for a promotion that he felt he deserved more than the less experienced soldier Michael Cassio. In the first few scenes of the play, Othello’s name is never mentioned, emphasizing the secrecy in Roderigo and Iago’s dealings.

Instead, Othello is referred to as “ the Moor” and descriptive phrases such as “ thick lips”, “ a Barbary horse” are used to refer to Othello’s person, which emphasizes Victorian stereotypes of the African race. While alone with Othello, Iago implies the possibility that Desdemona is having an affair with Cassio. Iago manages to persuade Othello to doubt Desdemona’s loyalty and love for him. He tells Othello to closely examine his wife’s actions when she is with Cassio, as Othello states, “She loved me for the dangers I had pass’d, And I loved her that she did pity them.

This only is the witchcraft I have used: Here comes the lady; let her witness it.. (Shakespeare I, iii193-6). Othello’s first gift to Desdemona was a handkerchief, which is a very Victorian gift to give to a lady. This supposedly trivial object later becomes the piece of evidence that Iago uses to destroy Othello’s marriage, and as Othello laments at the close of the play, “I had been happy, if the general camp, Pioners and all, had tasted her sweet body, So I had nothing known. O, now, for ever Farewell the tranquil mind! farewell content!

Farewell the plumed troop, and the big wars, That make ambition virtue! O, farewell! Farewell the neighing steed, and the shrill trump, The spirit-stirring drum, the ear-piercing fife, The royal banner, and all quality, Pride, pomp and circumstance of glorious war! And, O you mortal engines, whose rude throats The immortal Jove’s dead clamours counterfeit, Farewell! Othello’s occupation’s gone!. (Shakespeare III, iii, 397-409). One evening, as Desdemona and Emilia inform Othello that dinner is ready, Othello complains of a headache. Desdemona promptly offers her handkerchief to bind his head to relieve the pain.

Othello comments that the handkerchief is too small and pushes it away. Desdemona unknowingly loses grip of the handkerchief as she and Othello walk out of the room. Emilia picks up the handkerchief, remembering that Iago had asked her a number of times to steal it, she is delighted at the prospect of surprising her husband. At the same time as Iago was to plant Desdemona’s handkerchief in Cassio’s room, Othello who discovers his plot is infuriated and exclaims that he’d rather witness deception first hand than assume infidelity without conclusive evidence.

At this point, Iago, ever the manipulator, manages to get his way again by fabricating another story that Cassio once called out Desdemona’s name in his sleep and that Cassio acted as if he were kissing Desdemona. Iago reinforced his claim by claiming to have seen Cassio wipe his beard with the handkerchief. This enrages Othello and he vows to seek revenge on Cassio and Desdemona for the alleged infidelity. Once again, Iago succeeds and even manages to get promoted to lieutenant.

In the play, Desdemona’s handkerchief is the symbol of faithfulness and later in the play the symbol of truth. It is the handkerchief which symbolizes Othello’s internalization of Victorian mores into his character which allow him to believe Iago’s tripe about Desdemona’s infedelity, and which ultimately leads to his downfall, his loss of love, and his shame. Work Cited Greenblatt, Stephen, et al. , eds. The Norton Shakespeare. New York: W. W. Norton, 1997. Orkin, Martin. Othello and the ‘Plain Face’ of Racism. Shakespeare Quarterly. Vol. 38, No. 2. (Summer 1987). Pp. 166-188. 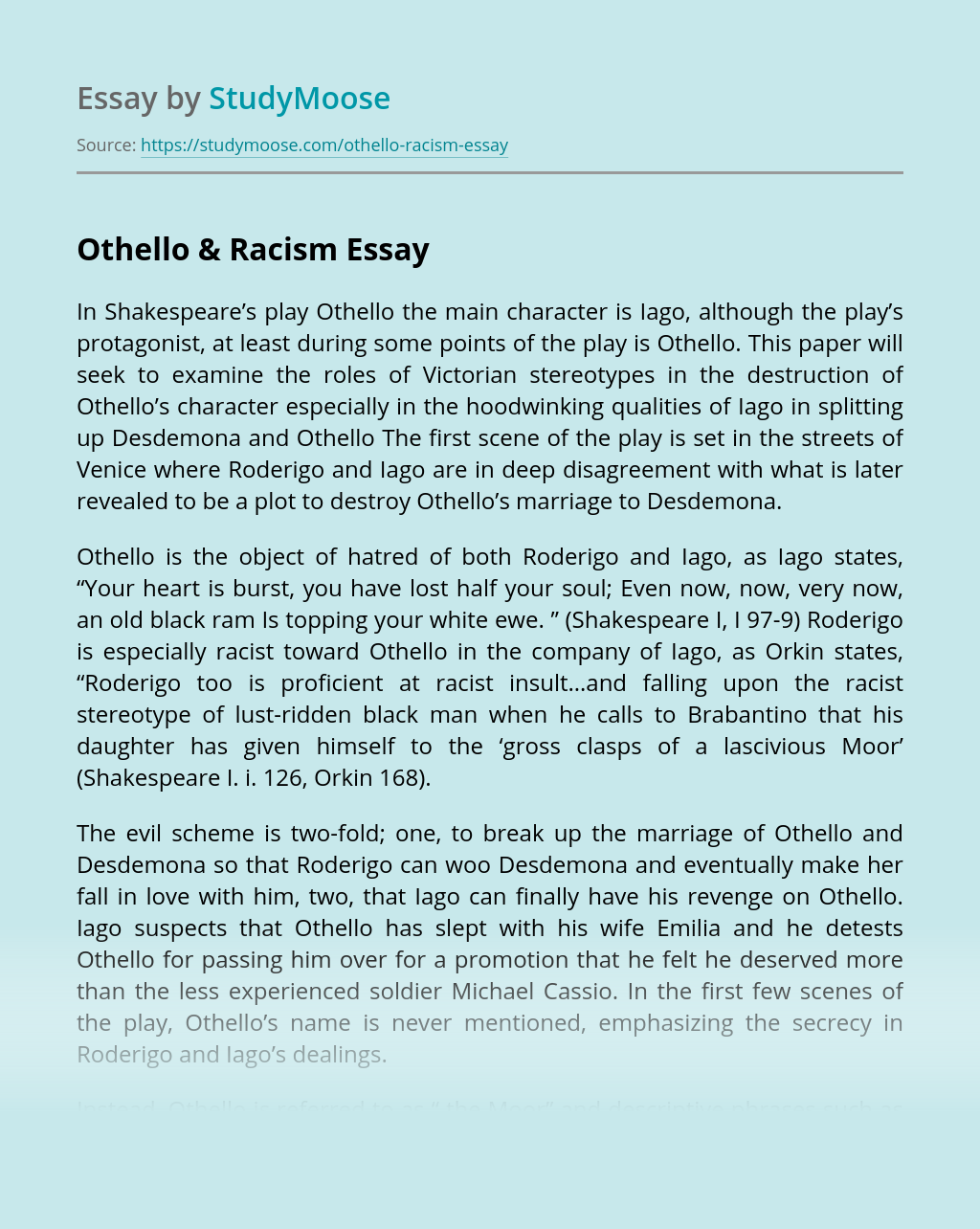 Jealousy is a lethal weapon if used in the wrong hands. Jealousy is the feeling of resentment against someone’s success or advantages. In the texts, “Othello” and “How to Get into Medical School, Part l and Part ll”, the authors William Shakespeare and Vincent Lam decide to use the theme of jealousy to develop an...

Yago And Betrayal In “Othello”

“Othello” is one of the most successful plays in Shakespeare’s collection. One of the subjects the tragedy addresses is betrayal which is a crucial part of the play that helps the author develop events to bring it to its climax. Iago’s character symbolizes disloyalty, but what are the motives of his treachery? It seems like...

Get Essay
Othello and the Moor of Venice

The play, the Tragedy of Othello and the Moor of Venice, written by William Shakespeare has many underlying and reoccurring themes throughout. One major theme is that of betrayal and loyalty. During the entire play every character is either loyal to, or betrays another character. The theme of betrayal and loyalty is seen through every...

Imagery, as defined by Webster’s Dictionary, is the use of vivid figurative language to represent objects, actions, or ideas. In Othello, Shakespeare makes use of colors to represent ideas or to set the mood for the scenes taking place. The use of such color imagery enhances the play, causing the reader to look past the...

Language: The Fatal Weapon in Othello

Language is especially tricky because of all the possibilities it can manage. “Be quiet” versus “Shut up” is one example of the power that language holds. Rumors are another example of how powerful language can be when it passes through a certain set of ear lobes; some people are shattered by the rumors floating around...