Humans are born with a natural capacity for good and evil. As an individual develops, he or she is taught to distinguish between the two in order to strengthen a sense of right and wrong. Through Shakespeare’s play, ‘Othello’ (Heinemann Advanced Shakespeare, 2000) we are introduced to a meticulously devious character, Iago. Ironically affiliated with the military, a substandard moral compass, channels his unreasonable code of conduct. Well educated on human behaviour, his lack of ethics enables his character to exploit this skill set to deceive those around him, ultimately disguising his true character.

Don't use plagiarized sources. Get your custom essay on
“ Othello: Literary Essay on Iago ”
Get custom paper
NEW! smart matching with writer

Beyond all else, Iago considers himself a man of true wit and distinction. In Act I, he furiously declares, “I know my price” (p. 3). By this statement, he admits to Rodrigo, that upon oversight for the position of first lieutenant, his dedicated service and efforts have been in vain.

Having served at the front lines of the war, Iago adamantly deems that his echelon of experience proves him a more deserving candidate, than young Cassio. More so, an over confidence in his abilities, lead to the belief that he is of a superior authority, “I am worth no worse a place” (ibid). Continuing his argument of non promotion, Iago sees it unbearable, even shameful that he has been regarded with such insignificance. A man of his status and self imposed importance should not be degraded to such a pitiable standard.

In having lost out on the appointment, Iago’s pride and dignity have been considerably impaired.

Once a devoted soldier under Othello’s command, Iago believed it was his rightful place to gain promotion to lieutenant. When these expectations were
not met, it brought out the worst in Iago and the decision was interpreted as a personal offence to his proficiency. Although having already, risen to adequate ranks, Iago could not fathom the injustice. His superior and extensive knowledge had been undermined. In comparison to the present era, this form of ‘injustice’ is experienced frequently in professions where favoured parties lose out on coveted positions to seemingly less experienced oppositions. Victims feel at loss and that their competence has been jeopardised. Due to varying circumstances, these conceited opinions cannot be voiced as it translates into bad character and conduct. Consequently, Iago set out on a conquest for supremacy. Uncannily, abiding by modern day author, Robert Greene’s, “[Law] 3: Conceal your intentions”, of “The 48 Laws of Power’ (1998), detailing observational aspects profitable in a rise to command.

Within the community of Cyprus, Iago gave no obvious reason for opposing characters to suspect his cunning. In this respect, he was constantly referred to as “Honest Iago” (p. 41). Specifically, Othello, affectionately used the term, “Honest Iago, My Desdemona must I leave to thee. I prithee let thy wife attend to her” (ibid). Not only does Othello impart trust with ease, but he mistakes Iago as a dear friend. One who would never think to bring harm to Desdemona or he. This misplacement of faith encourages Iago in his surreptitious endeavours. On several more occasions we witness other characters mistakenly confer with and about Iago’s sincere nature. Following a grave night for Cassio, he bids a farewell of, “Good night, honest Iago” (p. 99) unaware of Iago’s key role in his ruin. Desdemona continues the chain of mistrust when she speaks, “O, that’s an honest fellow” (p. 113) of Iago’s phony grievances of Cassio’s unfortunate predicament.

An individual’s nature can be concealed in various forms within the company he keeps, “Law 12: Use selective honesty and generosity to disarm your victims” (Greene, 1998). Iago, around such company manipulates and deceives his companions that he is faithful. Having grasped an understanding of human behavior, this wisdom is disposed through cruelty and brutality. In persuading the Cyprus population of his sincerity, unknown to the other characters, Iago fuels his perception of his superiority. Such is his wit
that for a much of the play, his deceit goes undetected. When it appears that a character may unknowingly expose Iago’s ulterior motives, he buries the potential realisation beneath artificial concern.

Among the audience, the consensus is that Iago is purely composed of arrogance, jealousy and hostility. Triumphant in his succession to provide false evidence of Cassio’s incompetence, Iago announces, “And what’s he then that says I play the villain, When this advice is free I give and honest”(Shakespeare, p. 99). Arrogance radiates from his gloating manner, of having provided Cassio with ingenious and true advice. Jealousy held as incentive to which Iago brought about the demotion and discredit of Cassio. Moreover, this envy fuelled his ploy in planting a seed of convincing doubt to which Othello was wrongly mislead that his wife, Desdemona, was unfaithful. Not only in determining the detriment of the Moor’s marriage, Iago displayed hostility through his own relationship with Emilia, “To have a foolish wife” (p. 133), consistent with yet another law, “Law 20: Do not commit to anyone”, (Greene, 1998).

Only to the audience is Iago’s evil nature revealed for a significant portion of the play. We are exposed to his ulterior motives, lies and ultimate betrayal, “I follow him to serve my turn upon him” (Shakespeare, p. 5). Unlike any other character in the play, Iago is not fazed by the level of destruction he causes, neither to whom. In subsequent scenes, viewers witness the steady yet gradual downfall of the Moor. Unsuspecting, characters, indirectly aid Iago’s cause, particularly his ignorant, praise seeking wife, Emilia, which furthermore increases his arrogance of his unmatched brilliance. To the audience each move Iago makes is calculated methodically and only adds to the current chaos of the present scene.

Iago possesses an astute two dimensional disposition. His objective throughout the play is to ensure the Moor’s eventual ruin. He becomes the bane of Othello’s existence, through conniving, unforgivable means, only recognized by the audience if not himself. Born of a natural capacity for good and evil, it is evident that Iago acquires no good, a concept hidden from other characters within the play. In relation to the present, Iago
demonstrates the extremity to which an individual will go in order to sabotage the happiness and prosperity of an enemy. Persecutors hold a high opinion of themselves, as Iago displayed. Yet, by all means this strategy to pursue such an attack is achieved through clandestine, surreptitious modes. Iago can distinguish between right and wrong but still, he opts for the latter.

As Nobel Prize laureate, William Golding, once said, “We need more humanity, more care, more love. There are those who expect a political system to produce that; and others who expect the love to produce the system.” (Nobel Lecture, Dec 7, 1983). Humanity is defenceless against the erroneous nature of individuals like Iago. Repeatedly throughout ‘Othello’ (Shakespeare, 2000), his master scheme endures unnoticed. As children, we are prompted to ‘recognise virtue and vice’ (Zak. J. P. The Moral Molecule, 2011) to instil a sense of ethicality, nonetheless, alongside such vindictive figures like Iago, the ‘system’ (Nobel Lecture, 1983), political or military, regresses on any potential advancement, stunting ‘humanity, more care, more love’ (ibid). Humanity is susceptible to evil, regardless encouragement otherwise. As long as rouges exist, an eternal battle will ensue between good and bad, unmistakably demonstrated through Iago’s performance. 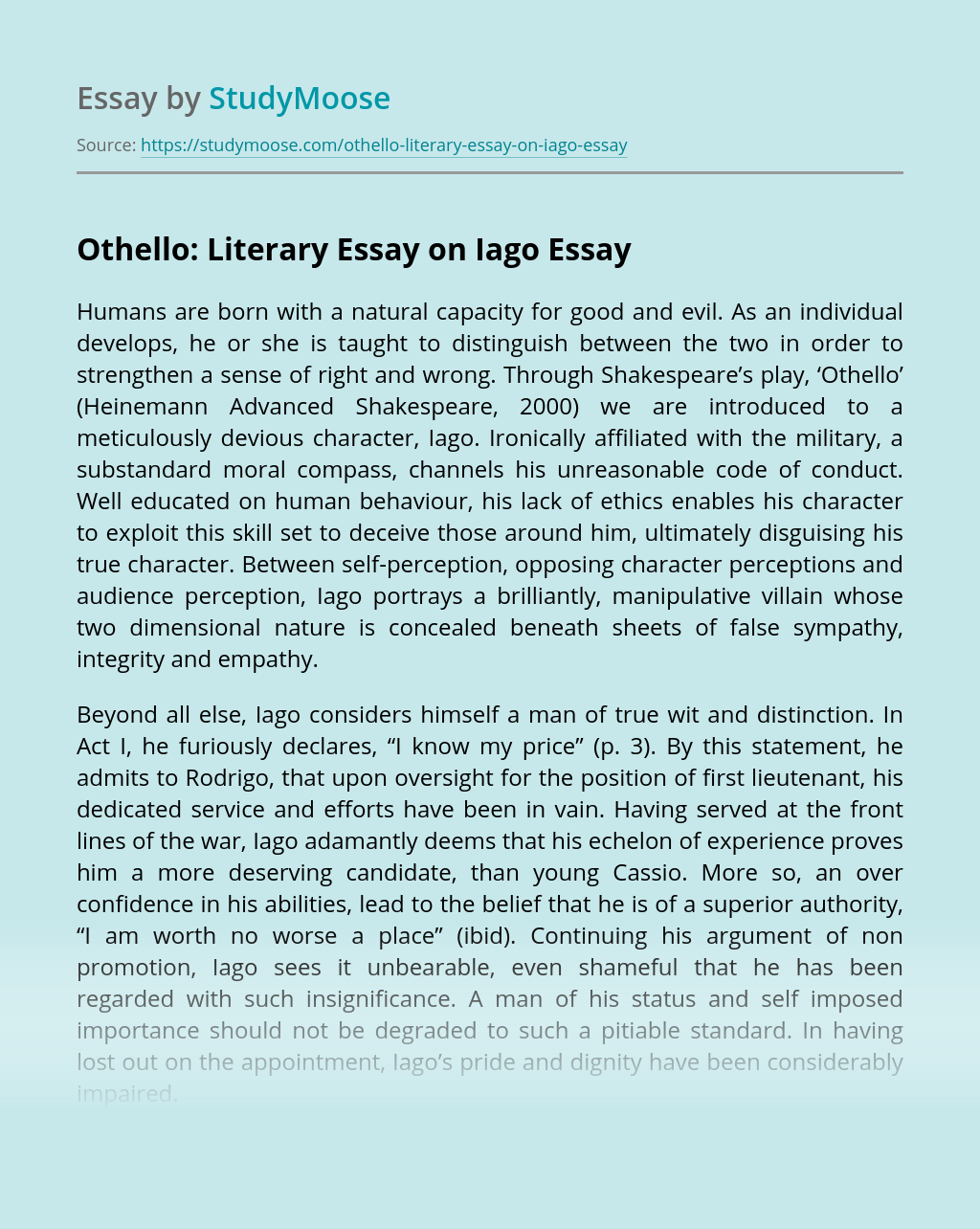