Othello is incharge of his own downfall

Othello, much like any other human being, is in charge of his own destiny. Despite the fact that his fatal flaw, which is his incapability to resist accusations or statements which are not in his favour, that of which leads to the Moor’s downfall, Othello, much like any other human being, has a choice – he, unfortunately chooses to believe anything and everything Iago places before him.

Desdemona is nothing short of loyal to the Moor. She, even though is wrongly accused, is nothing less than a “true and loyal wife” to Othello.

Turn in your highest-quality paper
Get a qualified writer to help you with
“ Othello is incharge of his own downfall ”
Get high-quality paper
NEW! AI matching with writer

The genuine and passionate love she has for the Moor is so overwhelming that it leads her to disobey her father Brabantio in order to be with her “husband” which which she sees as her mother who “so much duty showed to [Brabantio] so [she] is due to the Moor.” The same amount of passionate love is felt for her by her “Valiant” spouse, Othello.

However, Othello’s passionate love he has for his “white ewe” quickly turns in passionate hatred after having the seed of jealousy planted in him by “Honest Iago.

” Although Iago is the initiator of Othello’s downfall, he is merely removing the “Valiant” facade the “Brave Othello” portrays which thus reveals his cannibalistic nature.

The green-eyed “monster”, which was hidden behind the facade of a man who is of a “free and honest nature,” is revealed nearing the climax of the tragic play. Othello, by choice, now adapts to the cannibalistic and jealous nature which is inflicted by the Machiavellian character, Iago.

“The Moor already changes with [Iago’s] poison.” Othello allows the vine of jealousy to overthrow him which results in his murderous killing of his “true and loyal wife,” Desdemona.

During the revelation of his monstrous act, Othello cries out “O fool, fool, fool!” – this is indicative of his realization of his own cannibalistic actions which led to him creating a monstrous act, that of which is the murder of Desdemona. He, himself allowed his naivety and jealous emotions to take over him which leads to him killing his fair “maiden”, Desdemona, that of which he realizes was “a murder which [he] thought a sacrifice.”

As a punishment for his monstrous actions, Othello kills, not Iago, but himself, The choice to kill himself rather than to seek revenge on Iago is indicative of his realization that the matter of his downfall and the death of his wife was because of his own doings – by making the choice to believe the Machiavellian that is Iago. The Moor than proclaims that he “loved not wisely but too well.” – This statement is indeed indicative of him making the wrong choice to allow his emotions overthrow him which utterly leads to his downfall.

Othello is incharge of his own downfall. (2016, May 06). Retrieved from https://studymoose.com/othello-is-incharge-of-his-own-downfall-essay 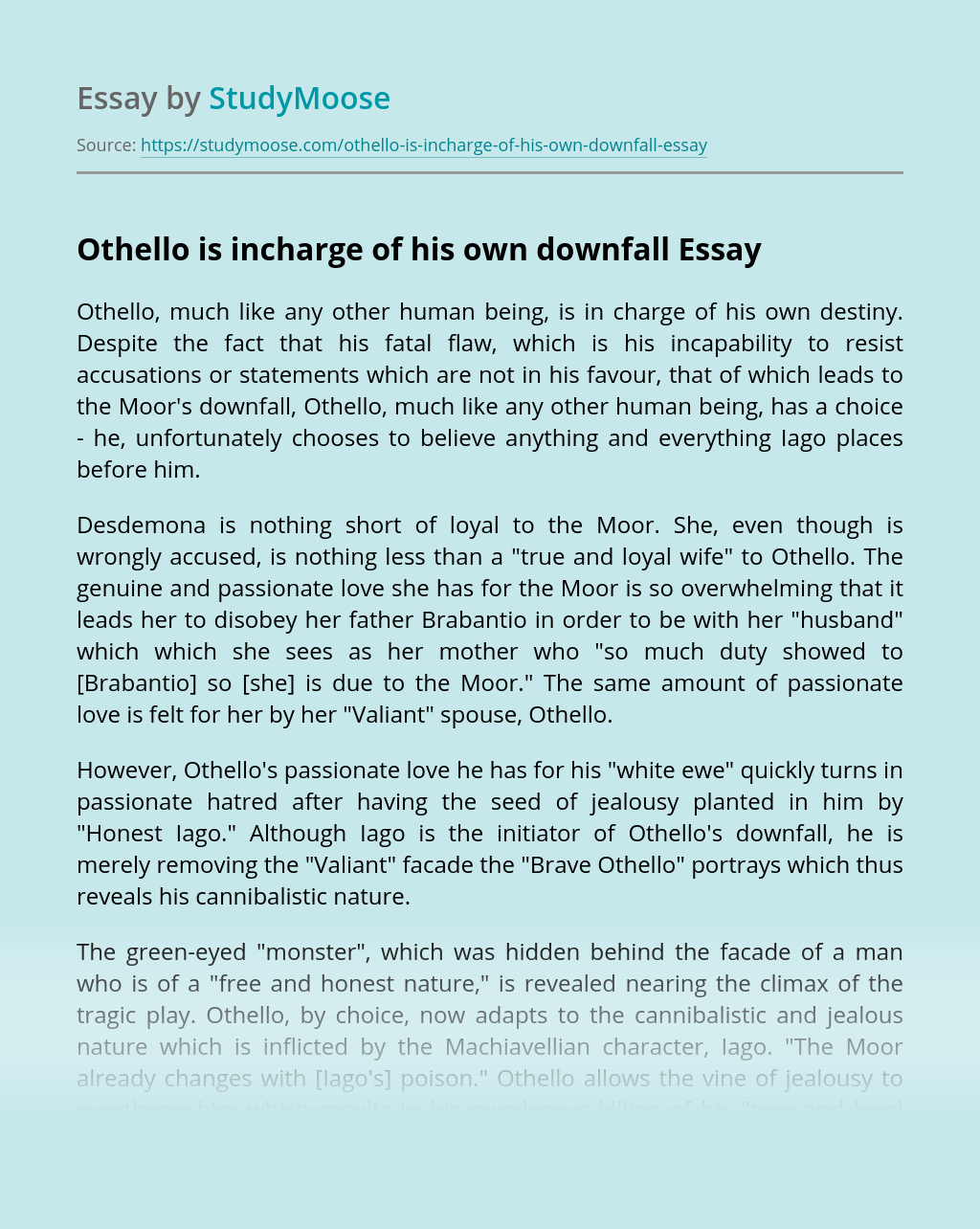 Turn in your highest-quality paper
Get a qualified writer to help you with
“ Othello is incharge of his own downfall ”
Get high-quality paper
Helping students since 2015
Stay Safe, Stay Original