Oroonoko is a thing which I can liken to nothing so well as a Rhinoceros … about the bigness of a Pig of Six Weeks old” (p. 43). Yet, notwithstanding Behn’s moving attempt to make it live again in her prose, as a way of memorializ-ing her past and of castigating those (like Byam) who let this marvelous possession get away, this is not really the Garden of Eden, as she well knew, but its fallen, duplicitous representation.

By the time of her arrival, low-born European colonists “such notorious Villains as Newgate never trans-ported” (p.

Don't use plagiarized sources. Get your custom essay on
“ Oroonoko by Aphra Behn: Historical and Political Contexts ”
Get custom paper
NEW! smart matching with writer

59), as she characterizes Byam’s council had considerably tarnished this apparent bower of bliss, though there yet remained one act or series of acts to transform it into a place of utter darkness. Soon her celebratory chronicle of pleasant olfactory reminiscence would be dis-turbed by a more pungent memory, by the mortifying “Stink” (p. 62) of Imoinda’s rotting carcass and the “earthly Smell” (p. 64) of Oroonoko’s self-mutilated body.

But before witnessing the spectacular deaths of Imoinda and Oroonoko, we must briefly visit another colonial space. After describing again her paradisal surroundings, this time as viewed from the prospect of St. John’s Hill, the “best House” in the country, where she lived, Behn treats her readers to a narrative of what she calls our Sports” (p. 44).

As befits an epic hero, Oroonoko performs such feats of strength as killing ferocious tigers; but, here, in this colonial world, these heroic feats serve other pur-poses as well, namely to keep him distracted from entertaining thoughts of freedom, while amusing and, after risking his life in capturing a “Numb Eel” (pp.

46-7), feeding his English captors. These feats not only establish Oroonoko’s control over savage nature, his superiority over it, but also, paradoxically, confirm his own savage nature and his inferiority to his weaker European companions. This process, by which a man hitherto praised for his civilized manners will eventually become a wife-killing “Monster of the Wood” (p. 61), resembles that by which, as we have seen above, the native Indians are first humanized by being likened to Adam and Eve and then dehumanized by being compared to animals. It is no wonder then that Oroonoko, thus transmuted into a liminal creature in-habiting the space between civilization and savagery, leads the whites in an ethnographic expedition to an Indian town. This “digression,” as Behn later calls it (p. 51), begins with the revela-tion that, contrary to her earlier assurance of amity between Indians and English colonists, all is not well, and a “feud” has broken out.

One result of this hostility is that the fearful narrator cannot now satisfy her touristic de-sire of visiting a real Indian town situated away from the colonized space of English plantations, presumably preserved in its pristine state, and thus waiting to be appropriated not by actual possession but as spectacle in yet 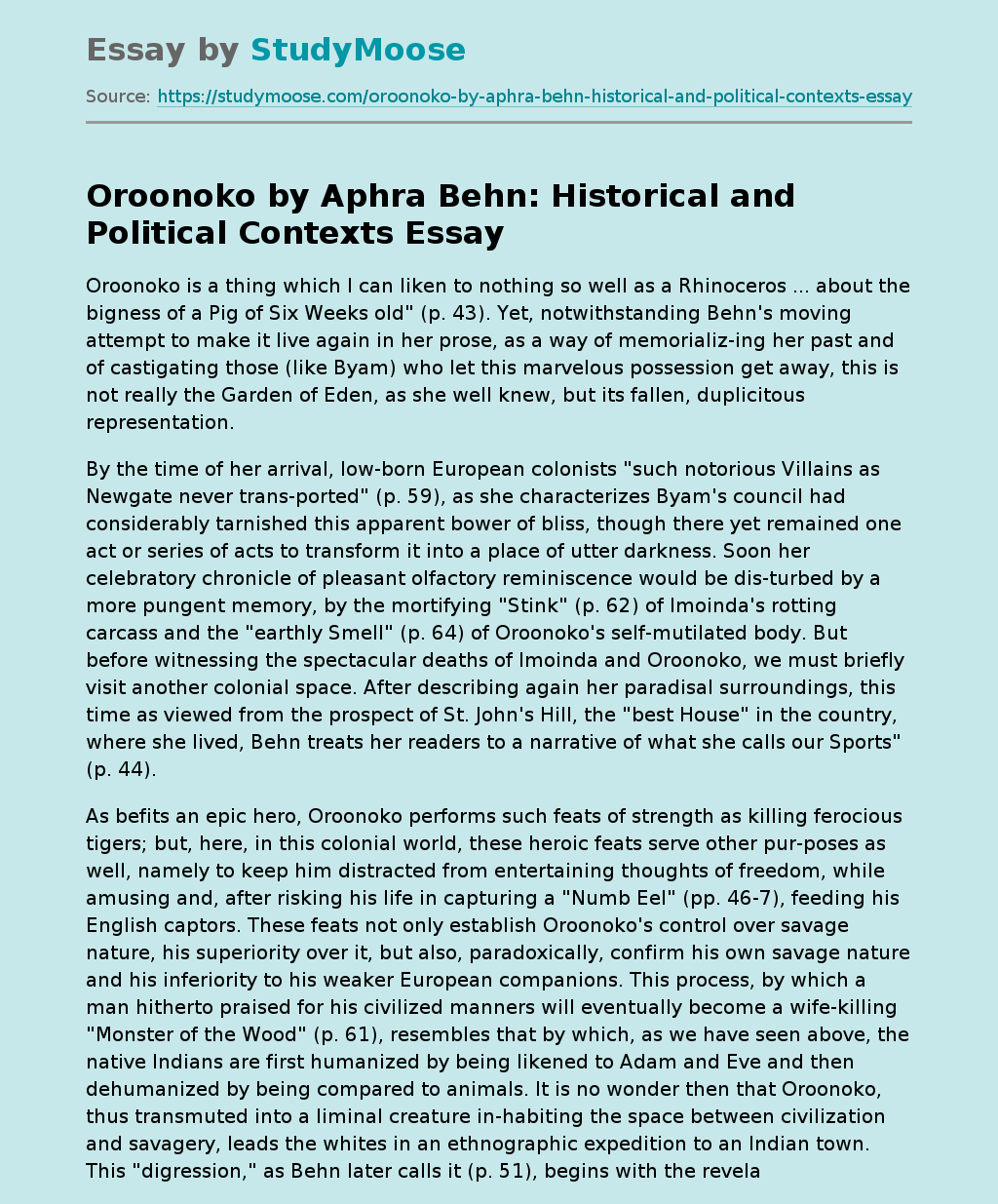