Orientalism and Imperialism in "Heart of Darkness"

Don't use plagiarized sources. Get your custom essay on
“ Orientalism and Imperialism in “Heart of Darkness” ”
Get custom paper
NEW! smart matching with writer

(Rashkin, 113.) Thomas Stearns Eliot approached it from this point of view, he believed that Heart of Darkness was about the fundamental evilness of mankind, about the moral degeneration, which will lead us to a hopeless, bleak future. Bertrand Russel for example connected it to Rousseau and idealism, stating that Mr. Kurtz was driven mad because of the terrain, and savage rituals which took place in Congo. Other people said, that they read the Heart of Darkness, and then visited Congo, only to find out that the book still holds true to this day, without exaggerations, as the culture and the flora is mostly the same as it was during the time the novel was written.

. It is probably true, that in our post-colonial world, Africa is the place which changed the least since the end of the 19th century. However, there is another interpretation, one which is closely connected to colonialism, crime, and describes what really happened in Congo during that time.

Joseph Conrad clearly used his personal experiences as the book is highly autobiographical, and his imagination to write Heart of Darkness, however his motives were not only personal, but probably social as well.

He wanted the Western world to know what were the crimes and atrocities that were commited against the natives of Congo Free State. Leopold II of Belgium was interested in colonies, because he thought that colonies were the key for his country’s rapid developement. In 1885, Congo Free State, a substantially larger area than Belgium itself was established under the rule of Leopold. He was granted this area because of his promise to greatly improve the living conditions, and develope Congo for its native people. The European nations and the United States took Leopold’s words, but in reality he commited unspeakably horrible things and exploited the people of the Congo for a material called ivory. Ivory helped Leopold to earn a fortune, and in the end that was what mattered, the destruction of thousands of lives in the process was far less important to him. Conrad witnessed this, as he was working for a Belgian trading company on one of its ships. Not only that, buta s Rashkin writes, Conrad loved drawing analogies between the past and the present. He compared Leopold to the Spanish conquistadors, like Pizzaro and Cortez. He saw another important analogy between England and the Great Roman Empire. In a sense, that was also colonization the only difference was the fact, that at the time Rome represented civilization and England was the savage, barbaric nation. As we all know, later the Roman Empire crumbled, and this was attributed to barbaric tribes, who destroyed the empire. Similarly how the British Empire had fallen apart later, as Rashkin points it out.

Heart of Darkness, being a modernist work uses a very interesting narrative technique, which is cleverly implemented by Conrad. He does acknowledge the developements and sophistication of the Western world, but sometimes he make us feel that maybe there is not much difference between sophisication and savagery. Conrad achieves this by using two narrators in his novel. It is also known that Joseph Conrad was a French sailor, but later he decided to become a British sailor, because he did not like the way France treated the people of its colonies. They were more agressive and thought that they worth more than those whom they controlled. This is also the reason why people, who were under French control dislike European people, sometimes displaying hostile behavior as well. This directly leads us to Conrad’s genius, as Mr. Kurtz, one of the central characters in Heart of Darkness is from a mother, who was half English, and from a father who was half French. As Conrad says in his work: „ All of Europe contributed to the making of Kurtz.”. Conrad’s opinion on the English and French ways of colonization can be seen on Kurtz, and how he changes from an English type of colonizer to a more French like one.

Mr. Kurtz is the commander of an outpost in Congo Free State, who was sent by a Belgian trading company. If we stick to this interpretation, Heart of Darkness is mostly „About the civilizing methods of a certain great European Trading Company.” as Edward Garnett said. Kurtz was sent there to oversee the operations taking place in the Congo, as well as to represent the greatness of Europe, their sophisticated technologies, and their culture. He is introduced to us as a character who is largely similar to Saul Bellow’s Henderson. A man with status, talent, and remarkable intelligence, who is full of lust, and urge to do something more. He is indeed a man with a gift, as he paints, writes poetry, composes music and most of his people think that he has an impressive career before him. His name is known throughout the region surrounding his outpost, his superiors are jealous of him, and he has admirers as well. His initial vision is to educate the people of Congo and enlighten them. One of his paintings has a woman on it, who has her eyes covered, and carries a torch in an almost pitch-black environment. This also proves Kurtz’s initially „noble” intentions. The protagonist Charles Marlow is also largely impressed by Kurtz, who used his intelligence to befriend the native tribes surrounding his outpost, to turn himself into a godlike figure in the eyes of the people of Congo, getting as much ivory in the process as he could.

Orientalism and Imperialism in "Heart of Darkness". (2021, Aug 06). Retrieved from https://studymoose.com/orientalism-and-imperialism-in-heart-of-darkness-essay 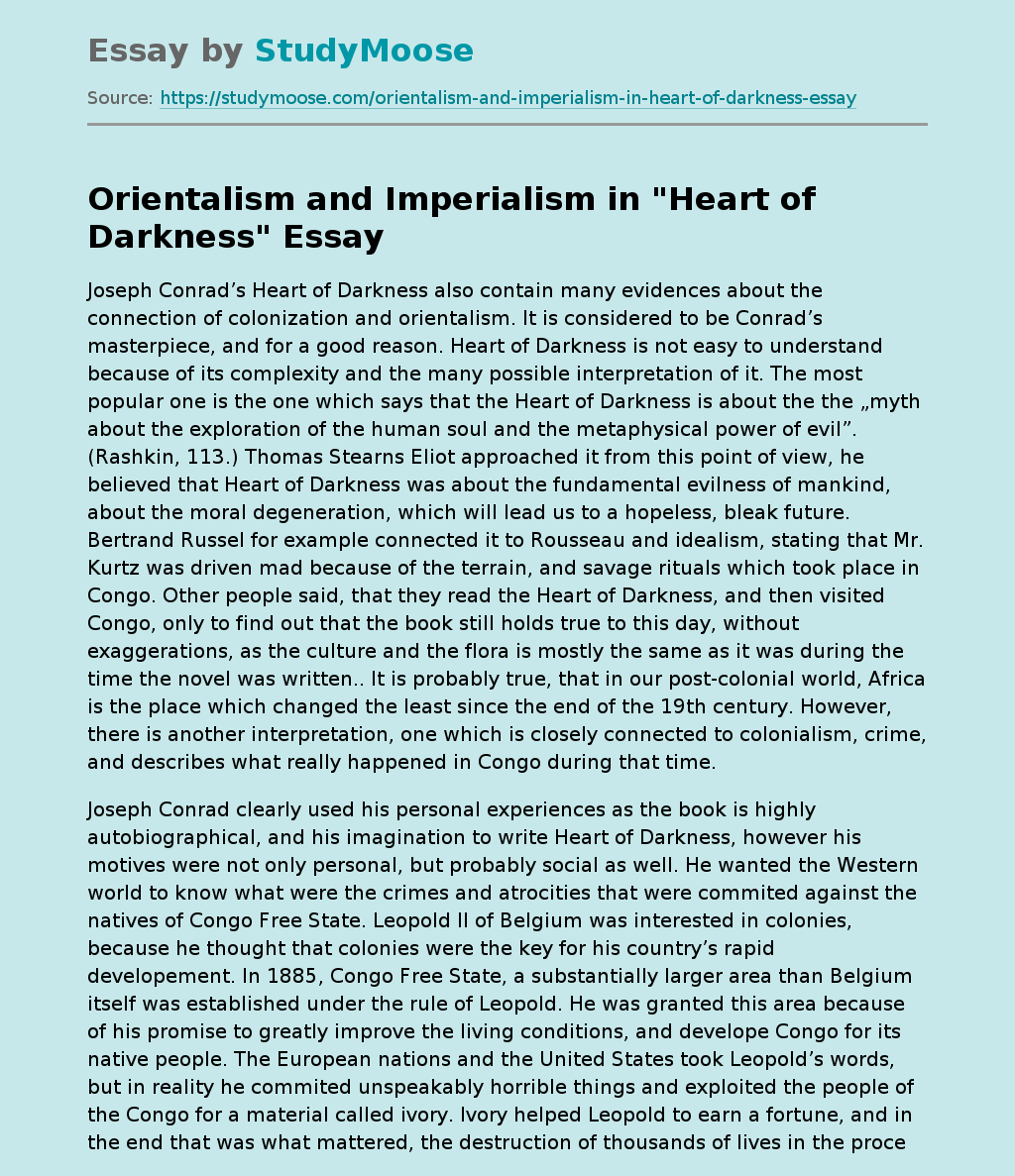