Organizations Today Are Faced With Many Issues

Don't use plagiarized sources. Get your custom essay on
“ Organizations Today Are Faced With Many Issues ”
Get custom paper
NEW! smart matching with writer

The underlying question is “Why are ethical issues a major concern for an organization?”

Ethical issues can cause an organization legal problem. For example the legal issues that News Corp board member Lachian Murdoch is facing, as stated in the Wall Street Journal this week. He is charged with allegations that he was involved in an attempt by the company’s Australian unit to offer favorable coverage in return for political support in the late 1990s (Critchlow, 2011).

Murdoch denies any wrong doing and stated he was never involved in lobbying. He stepped down as News Corp’s deputy chief operating officer in 2005, by remained at the company only as a nonexecutive director and a voting stakeholder (Critchlow, 2011).

Research shows that illegal and unethical issues happen for several reasons. For example (1) large firms are more likely to commit illegal acts than small firms; (2) although the probability of such wrongdoing increases when resources are scarce, it is greatest when resources are plentiful; (3) illegal behavior is prevalent in fairly stable environments but is more probable in dynamic environments; (4) membership in certain industries and a history of repeated wrongdoing are also associated with illegal acts; and, (5) the type of illegal activity chosen may vary according to the particular combination of environmental and internal conditions under which a firm is operating (Sims, 1992).

Other reasons ethical issues are a major concern for organizations is that it can lead to a potential loss of profit. Experts estimated that U.S. companies lose about $600 billion a year from unethical and criminal behavior (Kinicki, 2009). In order for a business to be considered successful there profit margin has to stay up. On the other hand it has also been shown that a commitment to ethics can be potentially profitable for an organization. Evidence has suggested that profitability is enhanced by a company being honest and having corporate citizenship (Kinicki, 2009).

Managers should always be prepared to encourage and focus on improving on-the-job ethics. The number one way they can do this is by behaving in an ethical manner themselves. Managers are role models whose habits and actual behavior send signals about the importance of ethics (Kinicki, 2009). Secondly it is important to develop a meaningful code of ethics. The code of ethics should be given to every employee, and supported by upper management. Also it is a good incentive to offer rewards for compliance and reprimand for noncompliance. Third it would be a great idea to provide each employee with ethics training. Employees can be properly trained to identify and deal with ethical issues through seminars, video, and internet training sessions (Kinicki, 2009). Finally managers should reinforce ethical behavior. For example when you use repetition when teaching children they tend to repeat what they are taught. Therefore if managers reinforce ethical behavior it will become a constant in the organization.

Organizations Today Are Faced With Many Issues. (2016, Oct 02). Retrieved from https://studymoose.com/organizations-today-are-faced-with-many-issues-essay 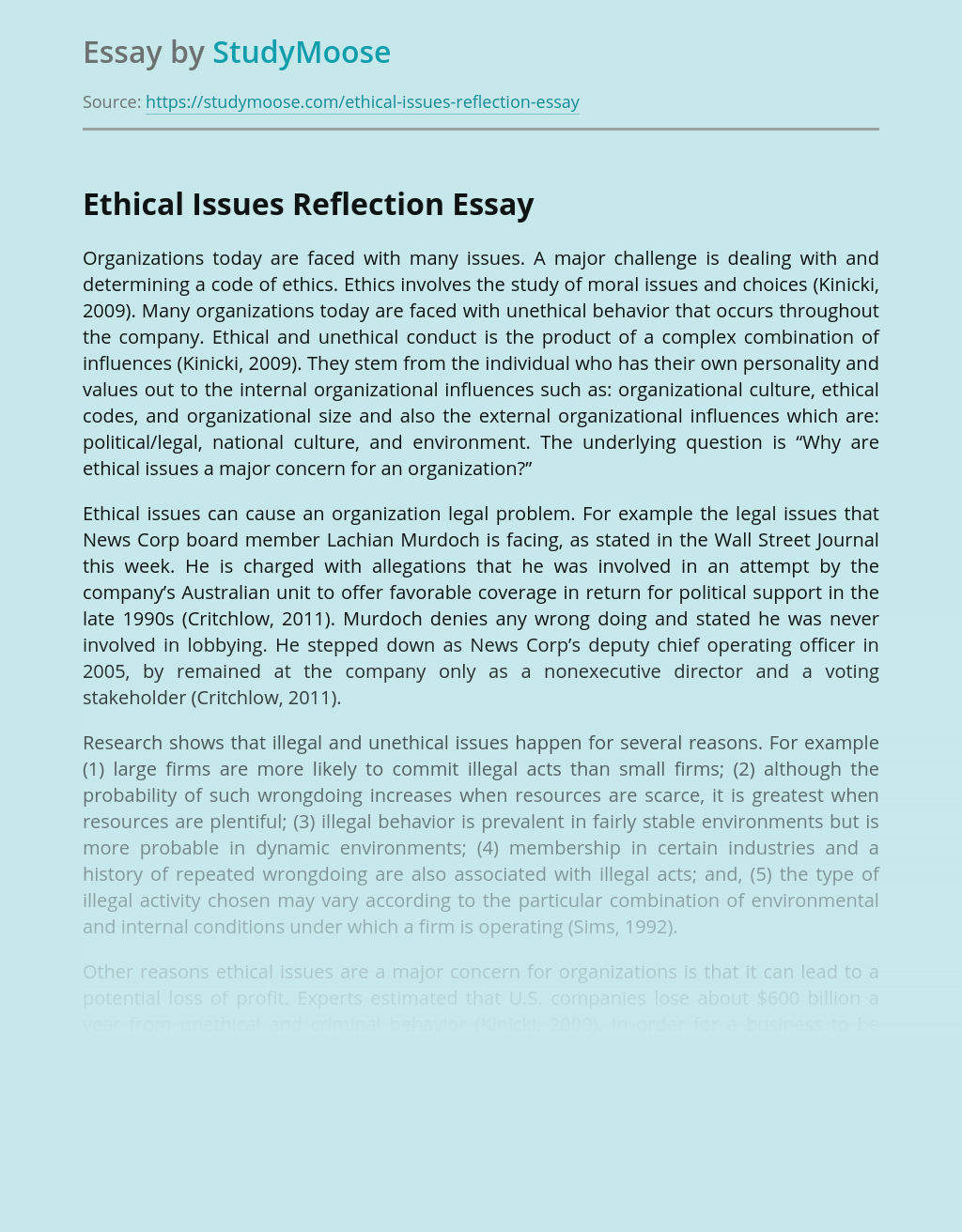