There are many roles in which local law enforcement agencies take part in.

Don't use plagiarized sources.
Get Your Custom Essay on Organizational Management and Operations Paper Just from $13,9/Page

The duties, functions, and responsibilities of local law enforcement agencies are broken down into many different roles. Local law enforcement agencies are in place to provide routine patrol of the communities within their jurisdictions. They provide emergency services, and uphold traffic enforcement laws. They conduct criminal investigations/planning and analysis. They provide detention for adults and juveniles, offer community services, crime prevention communications, community relations, and much more.

State law enforcement is like a local or county police department, only with a much larger jurisdiction. State police departments usually have many specialized units, such as investigative branches, aviation units, and tactical teams. Highway Patrol Officers, on the other hand, usually are tasked with ensuring the safety of the roadways of the state. Many states also have additional specialized state agencies. Some states with highway patrols have a separate state investigative agency. For instance, Florida’s FDLE conducts statewide investigations and assists local and county agencies with complex investigations of their own. One may think of this like a “state FBI.”

There are two different types of federal agencies, uniformed agencies and investigative agencies (although some do both). They provide uniformed law enforcement services for a specific location, such as The White House, United States Capital, FBI Building, US Parks, Supreme Court, various federal buildings. The other main type of federal agency is the investigative agency. These agencies have an assigned section of the United States Code that they enforce. For example, the DEA deals with drug laws, and the Secret Service focuses on crimes involving currency. In addition to the common agencies, all federal departments have an Office of the Inspector General that employs criminal investigators to investigate fraud within the department. On the negative side, working for the federal government can mean that one is at their beck and call when concerning relocation. While obviously not a concern with some of the uniformed agencies, relocation can be a concern if one works for the more nationalized federal agencies.

For the most part local, state, and federal law enforcement agencies share the same directives as well as support and oversee the same laws of the land. The only obvious differences that these three agencies have are their jurisdictions, resources, staffing, funding, budgets, support, and operations. In today’s society the roles and duties that are assigned to law enforcement will continue to change every day.

In the early 1990s the New York Police Department (NYPD) was as “paralyzed” basically reluctant to act out of fear of making mistakes. As an organization the NYPD suffered with productivity from the officers up to and including the chief (Harvard Kennedy School, 2013). The crime reporting system used was extremely dated hence the creation of a new software system that analyzed crime data entered into a computer, which maintained statistics (COMPSTAT). This data was evaluated regularly, which offered commanders the ability to develop strategies for awareness, patrol, and resource allocation, solving crimes, and quality of life improvement for the citizens in the jurisdiction. If the data is entered in COMPSAT properly, estimates of crimes can be made to include what type, times of day, and locations (Harvard Kennedy School, 2013).

This valuable management tool allows chiefs, sheriffs, and commanders with a graphic representation of what is occurring in an area of responsibility, which will assist with organizational management. Developing awareness of when and where crimes are likely to be committed allows supervisors to allocate resources in those potentially affected areas to aid in crime reduction. This tool helps with long-term (proactive) planning by knowing how many patrols are needed in certain areas and what times they need to be present (Harvard Kennedy School, 2013). The COMPSTAT predictions also can be beneficial when projecting operational and functional budgets for the fiscal budget. The COMPSTAT data blended with actual crime reporting can justify resource allocation both for personnel and money. Finally the principles of COMPSTAT are only beneficial if the officers, patrols, and supervisors conduct follow-up assessments to ensure the desired results are actually achieved. COMPSTAT is a proven tool for organizational management, but like any tool if not used properly it could be more harmful than valuable (Harvard Kennedy School, 2013).

Within any law enforcement agency, the administration section is a paramount tool. Some of the many duties that fall under the task of the administration section include training (includes sworn officers and civilians), computer systems, departmental forms, budgets, and records just to name a few (Police Administration Division, 2013). The responsibility of this section will usually lie in the hands of a Lieutenant or Sergeant who will answer to the Chief or Sheriff. The agency relies heavily on this section for up to date information. If there is a lapse in judgment or something is forgotten, it can have a drastic impact. For example, if records are not maintained properly, officers will have issues with they stop someone and run their information. That person could be wanted for murder and the officer would never know.

Law enforcement is always expanding and looking to improve on how operations are conducted. It is essential that the agency keeps an open mind and looks to make changes when needed. For example, if the agency hires a transfer from another department and that officer thinks there is a better way to handle a specific aspect of law enforcement, the agency should consider what that officer is saying. The department that the officer came from may have some technology or information that the new agency does not.

The leadership characteristics and responsibilities at the different levels are very similar. Leaders are born, not made. The leadership traits are developed through education, training and hard work. Leaders inspire others by setting an example. They show others that they care and have compassion for those that they lead. Leaders accept the fact that mistakes happen and a part of the job. They prevail against the odds not letting the obstacles get in the way. A leader’s since of duty calls them toward quality not quantity. They believe in the people they lead. Effective leadership encompasses both tactical and technical proficiencies. Leaders do not forget where they came from, regardless of rank. Higher ranking officers have a unique responsibility to demonstrate leadership and this is their primary operational function. (Gonzalez, 2014)

With the onset of a new millennium, American police agencies face new challenges. The terrorist attacks on the World Trade Center and the Pentagon changed the way in which law enforcement collectively thinks about public safety and security. Priorities for training at all levels, equipment, strategies, and funding have transformed policing once again this time focusing on homeland security history of American police systems from the English heritage through the last years of the 20thcentury. A number of present-day issues have roots in different epochs of American history. For example, the idea of community policing is traced to the colonial period and to medieval England. Preventive patrol, legitimacy, authority, and professionalism are 18th and 19th century concepts. Riots, disorders, and corruption are not new to American policing, similar events occurred in the 19th century. Thus by virtue of studying history, this can give contextual meaning to current police problems, ideas, and situations. Looking at the past, present-day events can be better understood. 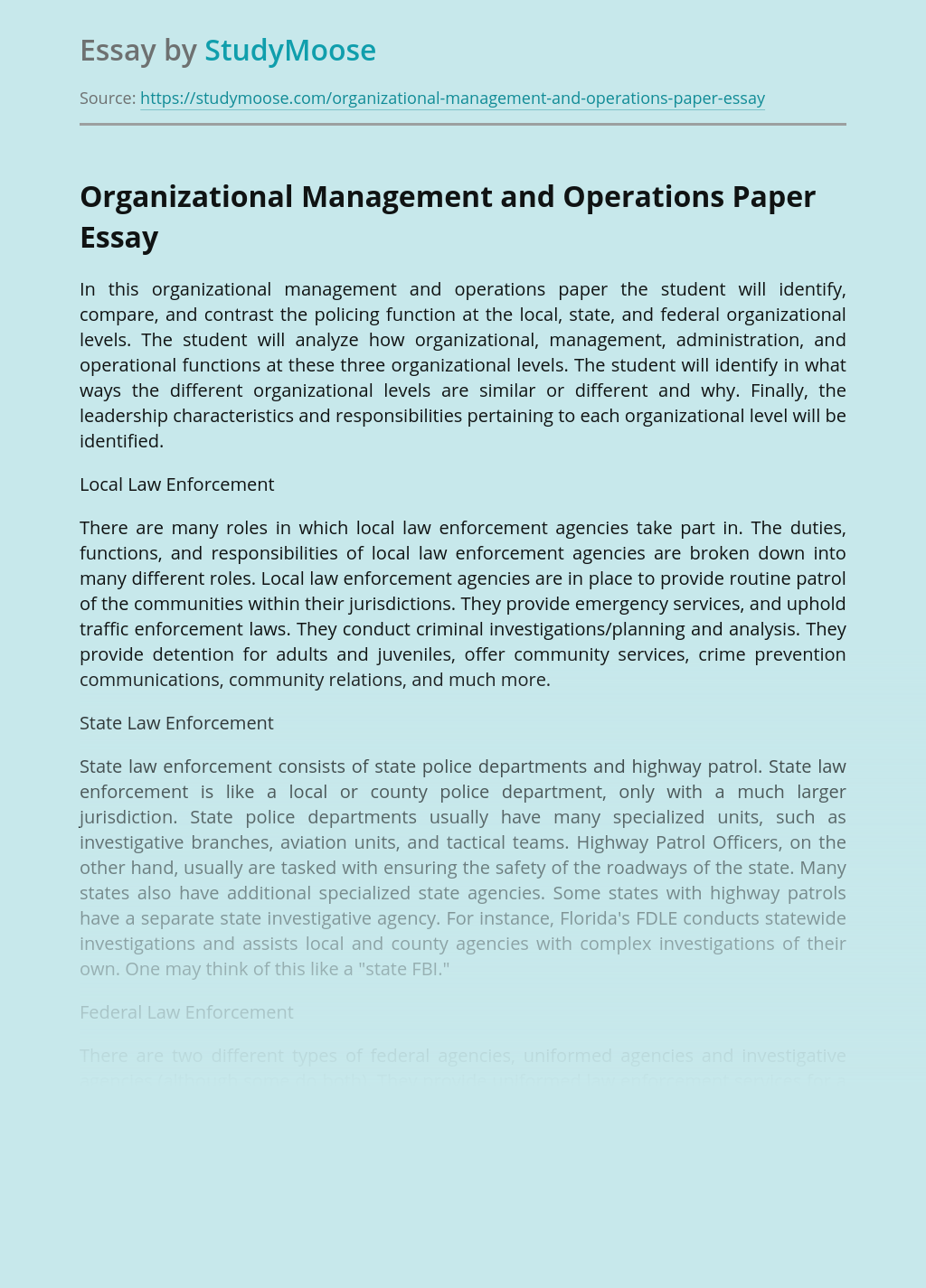 The article by Martin Gansberg, Thirty-eight who saw murder and didn’t call the police, is about an isolated event. I don’t think something like this happens a lot. Normally people would call the police or do something to help the victim. But unfortunately sometimes people can be very cold or even cruel, like in this...

Numerous study have found widespread racial bias in US criminal justice system. A new report issued by a coalition of civil rights organizations calls the “massively and pervasively biased” treatment on blacks and Hispanics by the US police and courts the major civil rights problem of the twenty-first century entitled “Justice on Trial : Racial...

Introduction Twenty-five percent of the world’s prison population, 2.5 million people, are held in American penal institutions. (ACLU, 2008). Sixty percent of those incarcerated are racial and ethnic minorities. These figures mean that 2.3% of all African Americans are incarcerated. The percentage of whites admitted to prison is 0.4% of whites and Hispanics, 0.7%. (Associated...

Comparing the Efficiency of Punishment versus Rehab AJS/502 Comparing the Effectiveness of Punishment versus Rehabilitation Two objectives in the criminal justice system are that of rehabilitation and punishment, and society reserves high expectations the system will live up to those expectations. Everyone in the criminal justice field and the public have concepts and viewpoints on...

Ethics, Discretion and Professionalism in Policing

Abstract: This paper is going to cover the unlawful habits that resulted in damaging discretionary acts that had actually taken location in numerous various authorities departments; from the huge cities of Los Angeles and Chicago to the small department of East Moline. This will cover, in information, how these officers went down the wrong course...