Don't use plagiarized sources. Get your custom essay on
“ Organizational Culture of Virgin Group ”
Get custom paper
NEW! smart matching with writer

It is the degree to which employees are expected to exhibit precision, analysis, and attention to detail.

It is such a culture gives a competitive advantage to companies by helping them differentiate themselves from others. Like this article, the virgin airline has a lot of competitors like 747airline. They provide heterogeneous products and the virgin airline put their selling point to their services that their crews are smiling, cheerful and pleased to help, let the passengers wanting to fly with them again.

Proficient in: Attention To Detail

Also, the virgin America sweeps the travel awards for service and quality. Although their planes are new, with great interiors and entertainment, the great service of its crews is what wins so many plaudits. Furthermore, they employ a general manager in the Caribbean.

He tried to change the way things were done, discouraged the staff from drinking their guests that reducing the staff morale. As he didn’t get the degree on attention to detail, then he was being replacement.

The second dimension in this culture is people orientation. It is the degree to which management decisions take into account the effects on people in the organization. It emphases on individual rights and expectation of treating people with respect and dignity. In this article, when the author was running Virgin Records, a member of the talent-scouting team was stealing and selling boxes of records to local secondhand shops.

But he didn’t fire the staff and just gave him a severe warning and a second chance. He expected the staff to learn from his mistake and get back to doing his job. As the experience of the author that he fell foul of the customs and excise people as trying to bring records into the UK. He was given a fine, a second chance and have tried to make the most of it ever since. This has made him much more accepting and forgiving of people’s mistakes. Also, the virgin airline treats their staff as family units and makes them feel that their company is their second home.

They will hold parties in the weekend, make sure all the staff can participate the parties and help them build the relationship between staff and manager. That is how the virgin airline treating their staff. The third dimension in this culture is team orientation. It is a degree to which work is organized around teams rather than individuals. It is collaborative and emphases on cooperation among employees. In this article, the writer mentioned about how to be a good leader to lead people well. He said that a good leader must know the team, its strengths and weakness; socializing and listen to the team is the key of being a good leader.

A good leader can led their teammate well, can motivate the staff morale and build the relationship between the team. He also said that a bad leader can destroy a business very quickly. As they employed a general manager in Caribbean who tried to change the way things were done. The manager discouraged the staff from drinking with guests that decreased the staff morale and broke the trust of management. So they replace the manager and restore the staff morale and the sense of management’s trust which had been broken. The fourth dimension in this culture is innovation and risk taking. It is the degree to which employees are encouraged to be innovative and take risk. Through this article, Brett Godfrey showed his business plan to the author, which outlining the start-up of a low-cost carrier in Australia to take on Qantas and Ansett in their domestic market.

He has expanded Blue and its sister airline to the United States, New Zealand, Thailand and South Africa. The company give them brand support and the space to go build the new business themselves like Virgin Active. Also, Matthew Bucknall and Frank Reed had bought out some innovative idea like the idea of a family-friendly health and fitness club in 1999. These planning and ideas are innovative, but at the same time they need to take the risk on running the ideas and planning. In this article, we can find out four dimension of organizational culture.

2. How culture affect the manager?

They are open systems, human relation, internal process and rational goal. A culture will predominately affect the manger in four ways, which are controlling, leading, organizing and planning. In the leading of the management, the mangers are able to use democratic leadership style that allows employees participate in decision-making progress, but not only individuals in the open systems and human relation culture. Through these two types of culture, the mangers require visionary leadership, responsive behavior and also tend to be participative, considerate and supportive.

Also, the mangers in rational goal culture are also able to use democratic leadership style and tend to be directive, goal oriented and functional. On the other hand, the mangers in the internal process culture will be more likely to use autocratic leadership style that they are tend to be conservative and caution. In the planning of the management, they will more likely to take the risk of the plan in open systems culture in the large extent, which this culture is emphasis on creativity and innovation that the employee will have some innovative idea when planning. In rational goal and human relation culture, the manger will take risk on planning in the small extent. But in the internal process culture, the manger are not willing to take the risk on planning, which their company are conservative and cautious.

In the human relation and open system culture, they will likely develop the plan by team, but the mangers will likely develop the plan by individual in the rest of the cultures. In the controlling of managers, the control system will be more flexible in human relation and open systems culture, which likely allow employees to control their own action. But in the rest of the cultures, the control system will be inflexible that the managers need their employees follow their rules and procedures. In the open system culture, the manager may able to take the risk to produce the product if exceeding the budget. On the other hand, the manager in internal process culture will prefer cutting the cost or will not produce the product rather than taking the risk to release the product into the market.

In the organizing of the mangers, their employees can have more autonomy in their jobs in the human relation and open system culture, but less autonomy of employees in the rest of the cultures. Through the rational goal and internal process culture, they will be able done their task by individual rather than team.

On the other hand, in human relation and open system, they will prefer to finish the task by team compare to individual and their manager will be likely being decentralization, that increase the decision-making authority of employees, but the rest of culture not. A culture will affect the mangers what they can or cannot do and how they manage. A good manger should know the culture of their companies deeply, that can help them to know what to do and not do and identify their role on managing a team or company. 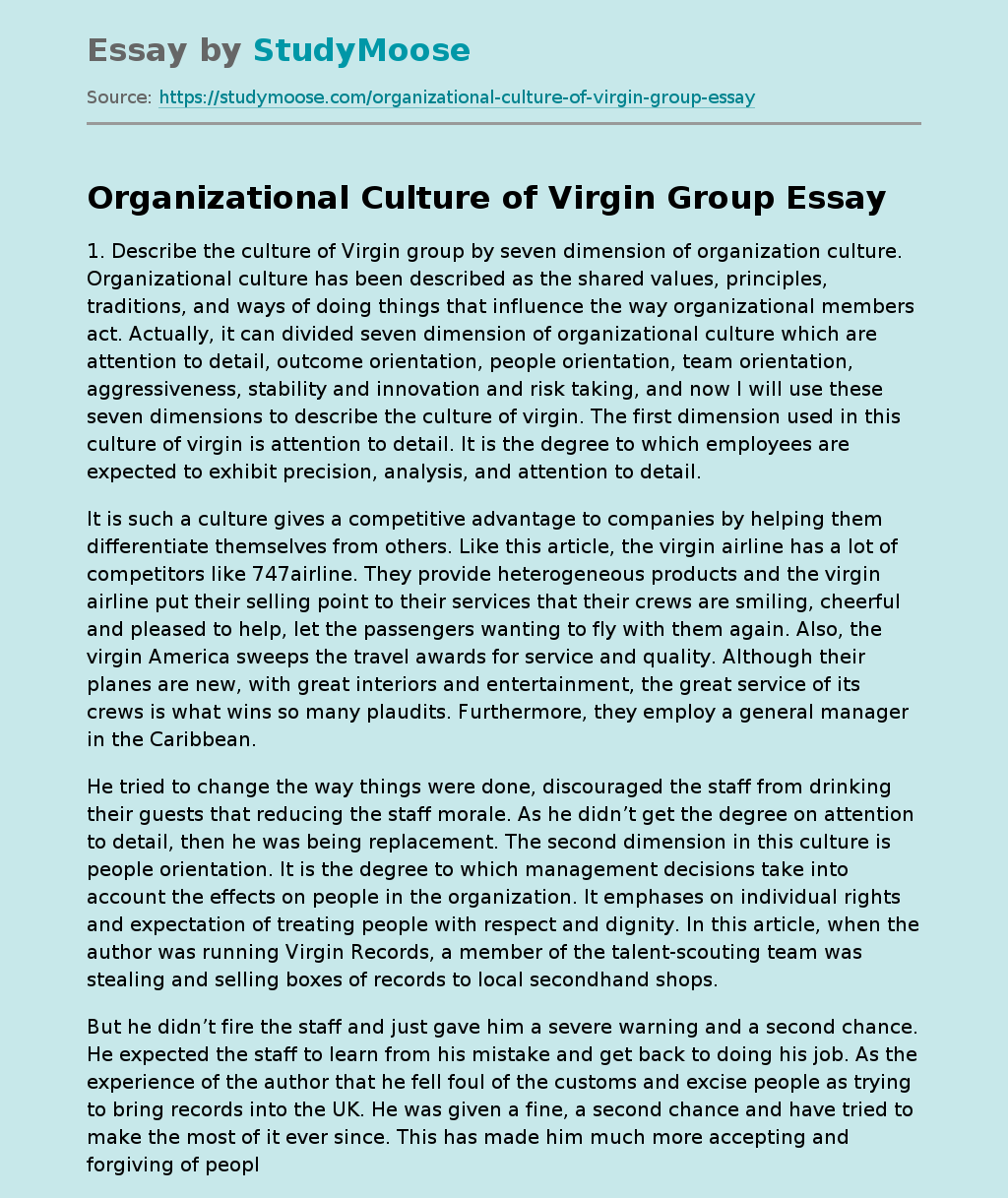