As I was doing the organisational behaviour module I was asked to become a part of a small team with three other student in my seminar group, the task of this team was to study a case study and produce various documents and presentation on its organisational behaviour aspects, we had about 8 weeks to complete all these tasks but some had to be finished earlier than others.

Don't use plagiarized sources. Get your custom essay on
“ Organisational Behaviour team ”
Get custom paper
NEW! smart matching with writer

The name of the team members were Ali (me), Louisa, Anthony and Kalsum.

In this essay I will be critically analysing my performance as the team worked to complete the tasks.

I will also be using my knowledge of organisational behaviour to explain the reasons behind my performance in the team. Firstly I will introduce my team characteristics and using my own observations explain the cultural and ethnical backgrounds, personalities, attitudes, behaviours, skills and intelligence of each team member.

The team members were chosen randomly by the seminar teacher, each team member did not know each other before except me and Anthony, I was familiar with Anthony as we had talked occasionally in the university before.

The team has 2 females and 2 males each from different ethnic and cultural background, therefore our team was very diverse. The team also had quiet different mixture of personalities, the advantage of these differences between each team members meant tha team would be more productive as there are richness in opinions and creativeness, but also the disadvantage of the diversity was the potential conflicts which could result from people misunderstanding each other due to their differences (Kandola & Fullerton 1994).

I am originally from Turkey, I moved to UK about 10 years ago, therefore English is my second language, meaning that I can’t speak English like a native language, I am a moderate Muslim, my family has adapted some western values (like many Turks) meaning I have a mixed culture. If looked at Belgin’s team role inventory I score high on the on ‘Shaper’ personality. Meaning that I am a highly motivated person with a great need for achievement who works very good under pressure, but the disadvantage with my personality is that I am easily provoked and I can offend other people easily. I find the predictions of this theory for me very accurate for explaining my actions in the team.

I am a very open minded person who is open to any argument about disagreements and will always consider others opinion, but as I am a proud person I will find it very difficult to listen to someone if I feel that my opinions are not being valued in return. I regularly find myself trying to shape the teams actions if I find that the progress of the team is not satisfactory. I consider myself very intelligent and fast at grasping and understanding ideas. I can sometimes find it difficult to put my ideas across clearly, this can create confusion and frustration on others.

Anthony is a originally from China but he lives in the UK, so he belongs to a mixed culture. Anthony’s personality is closest to ‘Team worker’ and ‘Resource Investigator’ in Belgin’s team role theory, he is very sociable and very talkative, Anthony is adaptive to the attitudes and working behaviour of other is the team, he is a good listener and a popular member of the team. Anthony is very enthusiastic and motivated towards the task, he knows a lot of people around the university and has contacts with a lot of people.

He is happy being told what to do as long as he feels progress is being achieved, Anthony will always try to avoid conflicts and try to resolve any conflict that may arise in the team, he will be on the side of majority decision to keep majority happy, this was a useful quality as you will realise later on. Anthony can seem immature sometimes due to his personality but he is a hard worker and an intelligent person who is also reliable.

Louisa is a British student with a British culture and upbringing, Louisa’s personality closely matches the characteristics of ‘chair’ and ‘monitor evaluator’ in Belgin’s team roles, she is a mature, trusting person, she is highly aware and a confident with excellent interpersonal skills, but she can generally looks serious and thinks over something quiet a lot before making a decision, she is a strong character with strong opinions and can be very political in her approach, she is also very manipulative, she is not very tolerable to different styles and approaches of doing things than her own ways, and will show her disapprovement using her body language. Louisa is very intelligent and will work through a task until it is completed. She likes to coordinate the group but will always insist that she does not want a leader in the group but rather a group where everyone contributes to decisions.

Kalsum is an Asian/Muslim but who spent most part of her life in Britain. Therefore she also has a mixed culture. I’m not really sure what personality group in Belgin’s theory she belongs to because I couldn’t really see a “personality” in her, but if I had to say one it would be a ‘plant’ and a ‘team worker’. She seemed to have a “blank” personality with not much contribution of ideas in the team, she didn’t seem to fit into the team and seemed somehow distant to the team members than except Louisa, she was happy to go along with the decisions of the team but occasionally she didn’t produce the work in the expected time set to her, and she was not very reliable to attend the meetings on time or see a meeting to the end. The quality of work she produced was good but she was not a very good source of ideas. 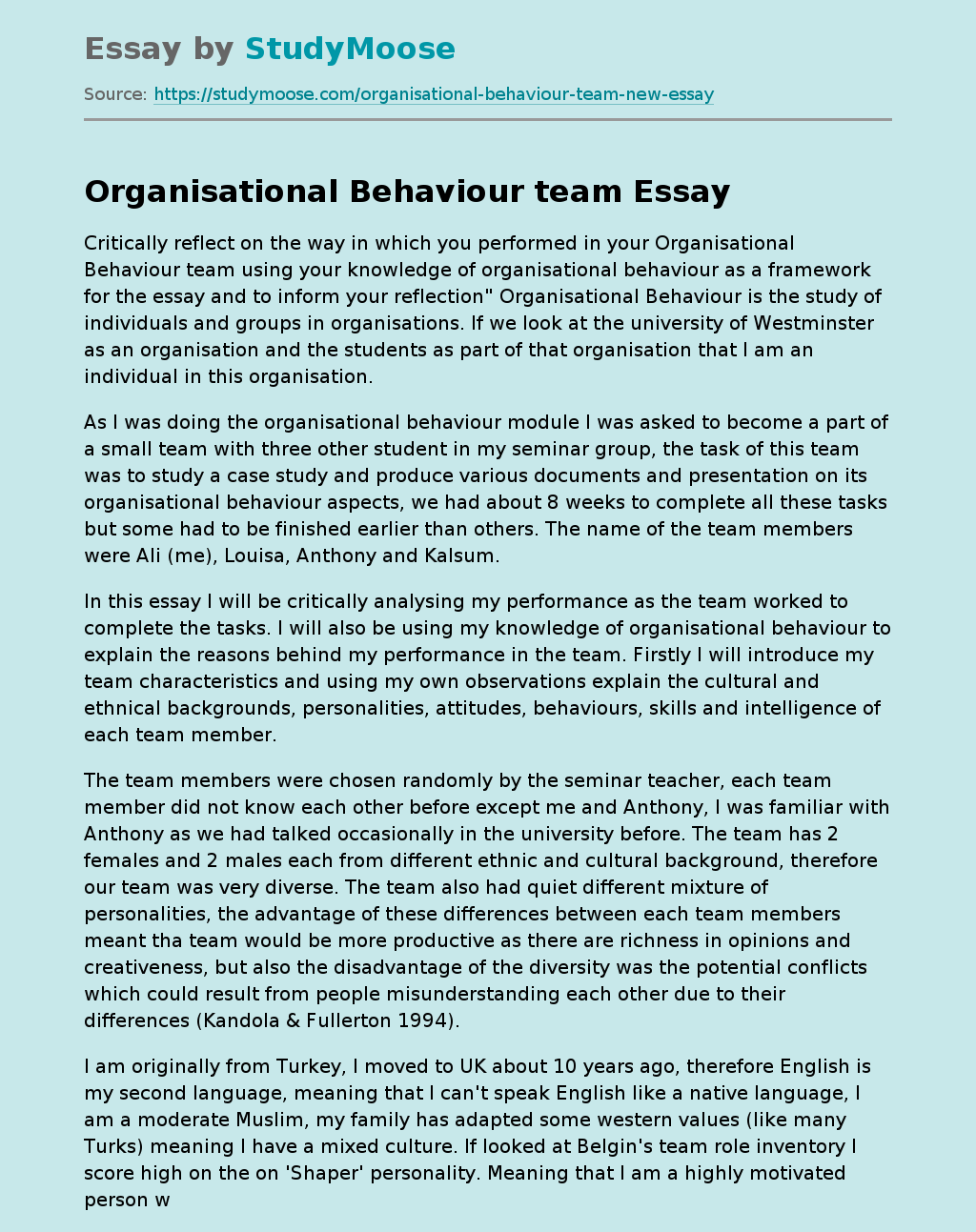