Organ donation affects hundreds of thousands of people and their families worldwide. At the end of October 2008, more than 100,000 people were waiting for an organ in the United States alone. Unfortunately, the number of donors is nowhere near that figure. The development of organ transplantation as a standard medical procedure denotes that there is a substantial demand for organs than is adequate to fulfill the current needs (Barber 234). If the organs were readily available as needed, thousands of lives could be saved each year.

Don't use plagiarized sources. Get your custom essay on
“ Organ Donation and Selling ”
Get custom paper
NEW! smart matching with writer

However, an organ market would redefine the act of donating organs and would in turn decline organ contributions (Childress 71). Admittedly, many would argue that the legalization of organ markets is both morally ethical and beneficial for the country. For example, some citizens feel it is the American way to allow people be free to auction their individual organs and do whatever they desire with their bodies. Additionally, many plainly declare that sale would increase the supply and not diminish the percentage of altruistic donation (Rothman 70).

Finally, advocators for legalization state that it would be a natural incentive to help escalate the amount of donations. To summarize, supporters of organ selling believe that financial benefits might encourage people to donate and should be a normal part of a free enterprise system. Indeed, many might believe legalization of the selling of organs is beneficial. However, organ markets should continue to stay illegal in the United States because selling is unjust, promotes unhealthy greed, and devalues human life. Initially, selling should not be legalized because it is unjust.

For instance, there is a strong economic motive for low-income families to sell their organs yet none for wealthy people to do so. Likewise, the risk of coercion and exploitation, specially of poor people, is considerable. Some insist the rich have been habitually prepared to allow underprivileged individuals to do similar life threatening things (McClellan 106). Another unacceptable element of unfairness is the fact that wealthy people can always afford to get a hold of these priceless organs but the poor cannot. At one point in time a kidney was put up for sale on the online auction site ‘eBay’.

The price for the organ had gone up to 7 million U.S dollars by the time eBay was notified of the situation. It is reasonable to believe that if sale was legalized the poor would be subject to being to forced to sell to gain this money and only the wealthy would be capable of affording the pricy organs. “We have never accepted the notation that the have-nots should become the source of spare parts for the haves.”, says Goodman. Based on this research, under the weight of poverty, individuals might have to resort to “cashing in” one of their expendable organs. In summarization, the poor have less of a chance to procure the costly organs than the rich and the wealthy have a strong motivation to pressure the poor to sell because of their economic situations.

Furthermore, research shows legalization could promote unhealthy greed on the population. To illustrate, “No longer would donors provide the ‘gift of life’ — they instead would donate the equivalent of the market value of the organs” (Childress 71). In addition, all too often where money is involved, greed overwhelms all other considerations. All too often, those who stand to gain the most will plave more value on the end(money or needed organ) than the means(the mutilation or death of another human being). For example, in the case of Chinese prisoners, it was reported that prisioners with prime organs and ready customers would get bumped to the front of the execution line.

And a suspicious number of prisioners were executed each year, more than four thousand in 1997, many of them for minor crimes. If the laws were changed, the greed of some very bad people would become even stronger. The notion that people might view an organ, or the money derived from sale, as a higher value than the probability of mutilating or slaughtering another human being is utterly disturbing. The stakes are high. What is being sold is in high demand. What is being bought makes a difference between life and death. These facts alone cause someone to do whatever they can to obtain an organ. Evidently, the basis of this view is found in the old saying, ‘Money is the root of all evil’. As a result, we clearly see that cash payments affect moral obligations and all too often when money is involved,  greed overwhelms all other considerations.

Ultimately, organ selling should not be legalized because it devalues human life. In particular, allowing the trade of organs would result in the commodification of bodies and their parts. Similarly, commodities would conduct us to be under the impression that expired bodies are merely products and would eventually lead the way to the destruction of social values. Think about the temptation. If you had a relative whose death was inevitable, would you be enticed to stop his or her treatment early if you knew you would get money for the organs harvested? If you wouldnt go that far, would you breathe a sigh of relief when the patient finally died and you would pay some bills or take a dreamed-of trip? That kind of tempation can’t help but make people forget, at least a little, that the dying patient is a human being.

“It is a fundamental abuse of people so desperate that they would have to sell a kidney or half of their sight” (McClellan 106). Commodification has the complete ability to diminish as well as destruct the practice of altruism. Therefore, buying and selling organs devalues human beings and turns them into products. In conclusion, organ markets should not be legalized because it is unfair, devalues human life, and promotes unhealthy greed. Our society has tremendously powerful explanations as to for what reasons the trafficking of organs for money should not be allowed. “We have been quite properly queasy about the free market approach to the human body. There are some things that aren’t and shouldn’t be for sale — among them an ‘extra cornea’ or ‘spare kidney’” (O’Neill 46). 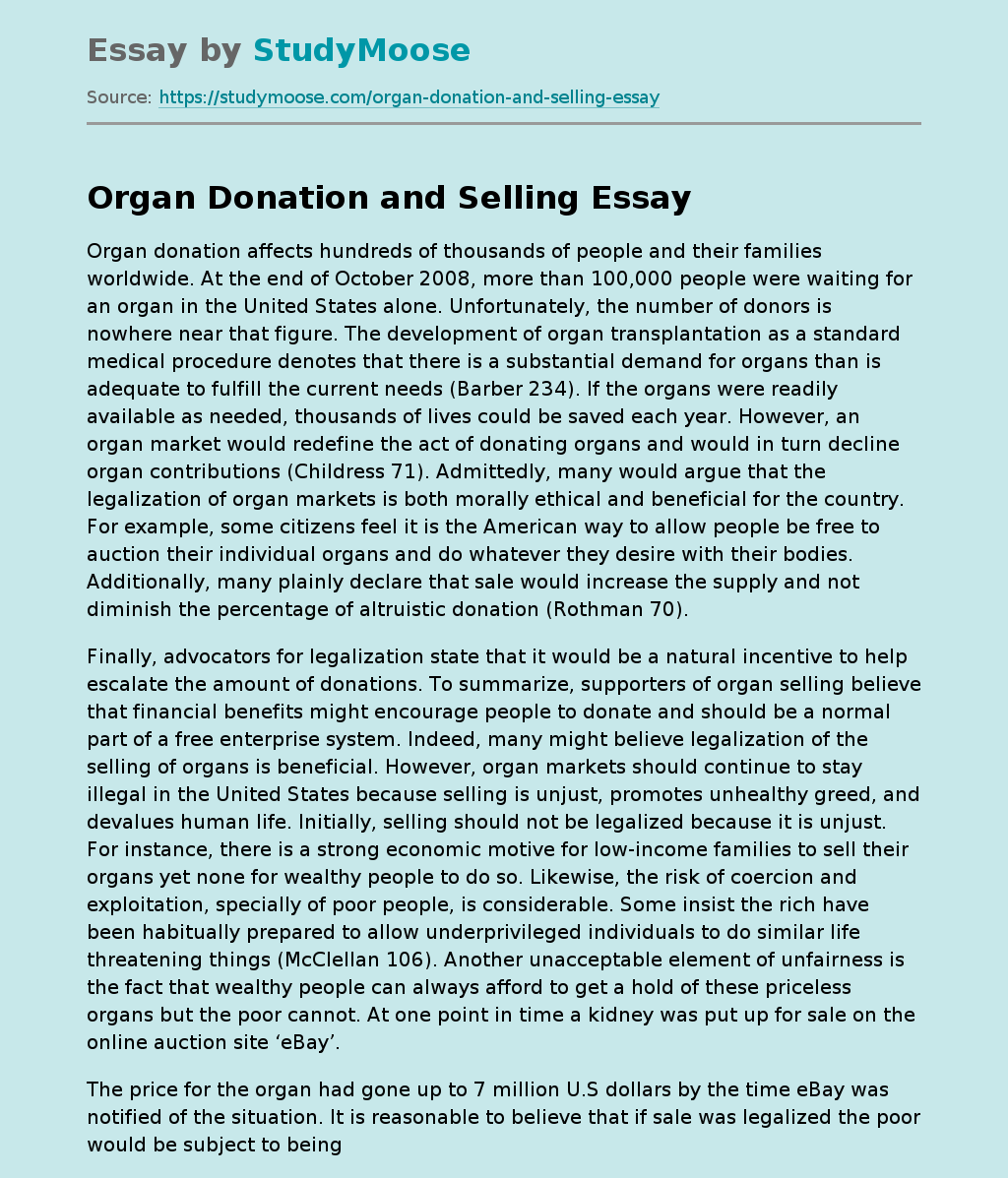