Don't use plagiarized sources.
Get Your Custom Essay on Oregon Oxford Debate Just from $13,9/Page

Evidence – 25%B. Delivery – 30%C. Interpellation – 30%D. Rebuttal &SUR-Rebuttal – 15% •9. Criteria for Judging- The judges, based on theirdiscretion, shall have the authority todetermine who will be the BestSpeaker and Best Debater. Thewinning team shall be determined bythe majority decision of the Board ofJudges. •10. Guides for Constructive SpeechSpeech types of Constructive Speech maybe:Reading MethodMemory MethodExtemporaneousMix method of memory andconversational or dramatic •11. Guides for Constructive SpeechPoise, gestures, audience contact andvoice projection are highlyrecommended. •12. Rules on Interpellation1. Questions should primarily focused on argumentsdeveloped in the speech of your opponent. However,matters relevant and material to the proposition areadmissible.2. Questioner and opponent should treat each other withcourtesy.3. Both speakers stand and face the audience during thequestion or Interpellation period.4. Once the questioning has begun, neither the questionernor his opponent may consult a colleague.

Consultationshould be done before but as quietly as possible . •13. Rules on Interpellation5. Questioners should ask brief and easily understandablequestion. Answers should equally be brief. Categorical questionsanswerable by yes or no is allowed, however, opponent if hechoose, may qualify his answer why yes or why no.6. Questioner may not cut off a reasonable and qualifyinganswer, but he may cut off a nervous response with a statementsuch as a “thank you” “that is enough information” or “yourpoint is quite clear” or “I’m satisfied.”7. Questioner should not comment on the response of hisopponent.8. Your opponent may refuse to answer ambiguous, irrelevant orloaded questions by asking the questioner to rephrase or reformhis question. •14. Rules on Rebuttal SpeechA. Rebuttal speaker should point out clearlythe fallacies committed by his opponentstating clearly what particularly statement orargument constitute said fallacy.B.

If not familiar with the fallacies of logic,the debater may counter arguments directlyby stating what arguments or statement isincorrect or false. •15. Role of the ModeratorThe moderator of the debate has the followingduties:1. To reveal the issue involve the debate;2. To rule on points of clarification about theissues or questions and answers made during theInterpellation; and3. To see to it that the debate is orderly andfollows the rules of parliamentary procedures. •16. Role of the Timer1. To time the speakers and debatersaccurately;2. To give the speakers a one-minutewarning with the ringing of the bell oncebefore his/her time is up.3. To prevent the debaters from exceedingthe time allotted to them by ringing thebell twice.

•17. Tips on Interpellationand RebuttalCROSS EXAMINATIONA. The cross-examination period of a debate is a time when the person who is not going to speak next in the constructive questions the person who has just finished speaking.B. Consider cross examination an information exchange period – it is not the time to role play lawyer.

•18. CROSS EXAMINATION C. Cross examination may serve six objectives: 1. To clarify points 2. To expose errors 3. To obtain admissions 4. To setup arguments 5. To save prep time 6. To show the judge how cool you are so they WANT to vote •19. CROSS EXAMINATION D. Most debaters tend to ignore the value of good cross- examination. Remember, 30% of the entire debate is spent in cross-examination — it should be a meaningful and essential part of the debate. If nothing else, debaters tend to underestimate the importance that cross-examination may have on the judge. E. Cross-examination will indicate to the judge just how sharp and spontaneous the debaters are. Invisible bias will always occur in a debate round and judges would always like the sharpest team to win. Good, effective cross- examination of the opponents can play an important psychological role in winning the ballot of the judge.

•20. CROSS EXAMINATION F. Be dynamic. Have questions and be ready to go, answer questions actively and with confidence whenever you can. The image you project will be very important to the audience/judge. This is the one opportunity the audience/judge has to compare you with opponent’s side-by-side. •21. GUIDELINES FOR ASKINGQUESTIONS:1. Ask a short Q designed to get a short A2. Indicate the object of your Q3. Dont telegraph your argument, dontmake it too obvious.4. Dont ask Q they wont answerproperly.”So, we win, right?”

•22. GUIDELINES FOR ASKINGQUESTIONS:5. Make Q seem important, even if it isjust an attempt to clarify.6. Politeness is a must — emphasize thedifference if they are rude.7. Approach things from a non-obviousdirection. Then trap them.8. Mark your flow/notes as to what youwant to question them about.

•23. GUIDELINES FOR ASKINGQUESTIONS:9. Avoid open ended Qs unless you aresure they are clueless.10. Face the judge/audience, not youropponent.11. CX answers must be integrated intoyour arguments made during a speech. •24. GUIDELINES FOR ANSWERINGQUESTIONS:1. Concise A.2. Refer to something you have alreadysaid whenever possible. This is safe.3. Answer based on your position in thedebate so far. Keep options open.4. Dont make promises of what you oryour partner will do later. •25. GUIDELINES FOR ANSWERINGQUESTIONS:5. Qualify your answers.6. Be willing to exchange documentsread into the debate.7. Answer only relevant questions.8. Address the judge. •26. GUIDELINES FOR ANSWERINGQUESTIONS:9. Try and not answer hypothetical Q. Ifthey demand, say you will give ahypothetical A.10. Signal each other, dont tag-team.11. Dont say”I dont know,”say”I am notsure at this time….” •27. REBUTTALSA. Most debaters, coaches, and judges would agree that rebuttals are the most difficult and yet the most important parts of the debate.B. Not only is there less time within each speech, but each debater has to sort through all of the issues to determine which ones are the most important ones!C. What a debater does or does not do in rebuttals will decide who wins the debate. Very few debaters (especially beginners) can hope to extend everything that happened in the constructive speeches.

•28. REBUTTALSD. Debaters dont have to do that and just because a team may have dropped a point or an argument is not an automatic reason to vote against that team.E. What matters is the type of argument that is extended or dropped in rebuttals-this will determine the winner of the round. •29. REBUTTALSThink about these four issues when rebuttalshappen:1. Which arguments have more weight at theend of the round?2. Which outcomes (disads, counter plans)are more likely given lots of internal links?3. What about time frame-what happensfirst?4. What about the quality of evidence? •30. REBUTTALSHere are some other helpful hints:1. Avoid repetition. Dont just repeat yourconstructive arguments. Beat the other teamsarguments and tell the judge why your argumentsare better.2. Avoid passing ships. Dont avoid what theother team said. You must clash directly withtheir responses.3. Avoid reading evidence only. You must beexplaining and telling the judge why these issueswin the debate. •31. REBUTTALS4. Avoid rereading evidence that has alreadybeen read in constructive. You can makereference to it by referring to it, but dont re-read it.5. Avoid “lumping and dumping.”Dont try togo for everything. You cant make 12responses to each argument in a few minutes.6. Be organized. Dont jump from issue toissue at random. Be specific and logical aboutwinning issues.

•32. REBUTTALS7. Dont be a blabbering motor mouth. Speakquickly but not beyond your ability. If you speaktoo fast, you will stumble and not get through asmuch.8. Dont whine to the judge about fairness or whatthe other team might have done that you think isunethical. Make responses and beat them.9. Dont make new arguments. You can read newevidence but you cant run new disadvantages ortopicality responses. You are limiting to extendingthe positions laid out in the constructive speeches. •33. REBUTTALS10. Use signposting. Make sure the judge knowswhere you are on the flow sheet. This is not the timeto lose the judge on the flow.11. Use issue packages. Organize your argumentsinto issue packages. Choose arguments which youwant to win. Dont go for everything. Extend thosearguments that you need to win.12. Cross-apply arguments. If you dropped anargument in a prior speech that you think wasimportant dont act like your losing. Cross-applyarguments you made somewhere else in the debate toanswer it. 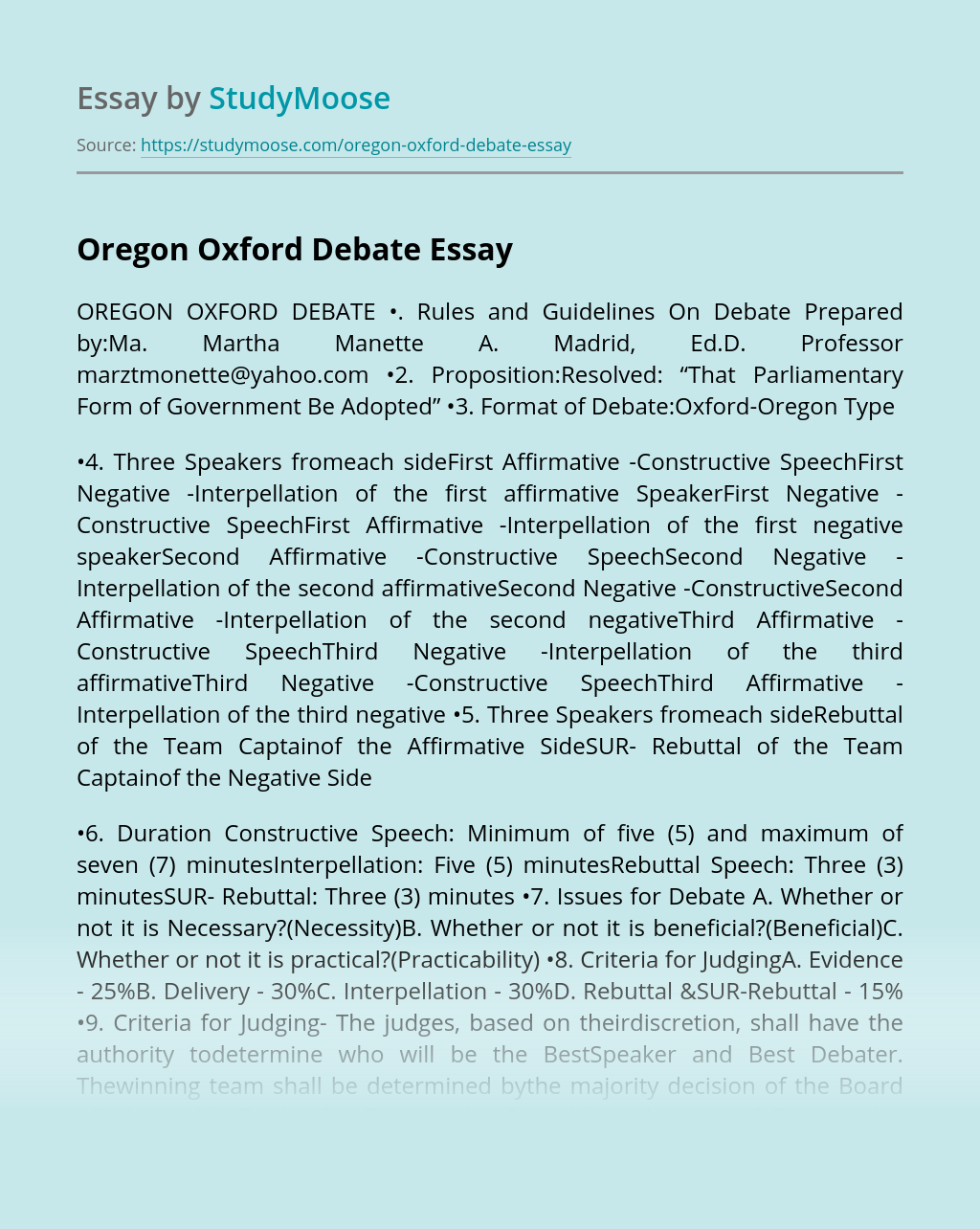 The family is the main issue that is in our life. Most people dream of having a happy family and the key to family happiness is not so far away. Those who celebrate the golden wedding are always asked the question about the secret of their kin happiness. As a rule, heroes of the jubilee... VIEW ESSAY

Erik Easler Professor Pelphrey Writing Seminar October 27, 2011 Faith and Evolution In the Catholic Christian religion, the essential belief is that Jesus of Nazareth was the son of god God who was born of the Virgin Mary, became man, and died on the cross for all of man kind’s sins. However, many people who... VIEW ESSAY

Nineteen Eighty-Four (1949) is a classic dystopian novel by English author George Orwell. Akin to the latter’s earlier work, Animal Farm (1945), Nineteen Eighty-Four is a cautionary tale about the dangers of totalitarianism. The novel’s main character, Winston Smith, is a civil servant tasked with disseminating government propaganda through the forging of records and political... VIEW ESSAY