Orange is the New Black The Story of Crime

Piper Kerman is a Smith College graduate who is serving thirteen months in prison, from 2004 to 2005, for a drug trafficking and money laundering crime she committed nearly ten years before. For most of her entire stay Piper is placed in a minimum-security prison in Danbury, Connecticut. I am from Avon, Connecticut so because her story was so close to home it immediately struck me as interesting. Her experience is eye opening, and as the book progresses you can see a slight transformation from a “normal” person to a hardened convict.

Don't use plagiarized sources. Get your custom essay on
“ Orange is the New Black The Story of Crime ”
Get custom paper
NEW! smart matching with writer

Pipers book, Orange is the New Black, gives insight into the realities of women’s minimum-security prisons in the United States and how the criminal justice system works today. Which, as we find out, can be a long and frustrating process.

While it seems a bit absurd that Piper is being locked away for a crime committed ten years ago, I do think it is justified. What she did was illegal and when you break the laws you go to jail.

That being said, I can understand why one would think that this was not justified for two reasons, the first being the fact that she committed her drug trafficking and money laundering crime ten years ago. This may be true, but that doesn’t mean it was wrong, you still need to be punished for your actions. The second reason this would be seen as unfair is because she was young and stupid when she did it. This I do not think is an excuse at all because that does not exclude her from knowing what she was doing and knowing it was wrong.

I want to add though, while I agree that the punishment for her crimes were justified, as in the prison sentence, I do not think it was fair that the whole process took that long in general. To make an accurate assessment, though, I think that you have to look at the goals of punishment and see if each goal was met as well.

When thinking about the goals of punishment the first that comes to mind is retribution. This is punishment based on a perceived need for vengeance, or that people should receive what they deserve. If you work hard you are rewarded and if you break the rules you get punished, therefore Piper has to payback for what she did. In this case it is hard to decide if Piper received a fair punishment. When she got charged with money laundering she was helping an organization operate. Even if she didn’t know the full consequences of her actions, she knew that is was wrong. The drug organization was not only using it to support its buying of drugs, but it could also have been doing many other horrible things.

Although she says she had no idea what was happening with the money or how it was being used, we have to remember that this is only her side of the story and that the judge ruling on her case has so many liars that would say the same thing. Because the punishment was from so long ago it seems like it snuck up on her and was unfair, but I feel that if she had been punished right after her crime was committed everyone would not feel as bad about it. I feel that the retribution she received was justified for her actions, even if they were ten years ago.

The second goal of punishment is incapacitation. The purpose of this is to separate offenders from their community as to reduce their ability to commit certain crimes. In this case, I do not think that this goal was accomplished. Although Piper had committed a crime, she was not going to commit any more; she had given that life up and was trying to move on. The reason for incapacitation is if you think someone will commit a crime again that could negatively affect the community.

As I said, not only was Piper moving on from her other life, she was making great steps to become a mature adult, from starting a relationship to thinking hard about her future. I want to point out the difference between retribution and incapacitation and why I agree with one and not the other. I think that Piper should have been punished for what she did, that is retribution. On the other hand, I do not think that Piper was a threat to her community, and that there was not a chance she would do it again. So in the sense while I do agree that it was necessary as a punishment, I do not think that it was necessary to stop her from committing another crime again.

Deterrence is the third goal of punishment and is compatible with incapacitation. Deterrence is the threat of punishment to convince people that the crime or activity they are committing is not worth it. There are two types of deterrence in my opinion and one of them was successful while the other was not. In Pipers case, while she did think about the fact that when she was smuggling the money over she might get caught, it did not deter her from saying no. Piper still decided that she would drug traffic and money launder so obviously the idea of going to prison did not affect her decision. So, in this case, I would say that no, under this meaning deterrence was not met. On the other hand, another form of deterrence is the idea that you can reduce the amount of repeat offenders coming back again and again.

Under this definition I believe that in Pipers case this deterrence was effective. Although when she committed the crime the first time she was not thinking about the punishment at all really. Now, she can’t get the thought of prison out of her head for a day, let alone if she was going to do something illegal. Her experience was so life changing it will affect the way she thinks and acts from the time she gets out, and I would consider that a success as far as deterrence. The fourth and final goal of punishment is rehabilitation, or the idea that you can change the way an offender thinks and behaves into a more positive form. There are many different forms of rehabilitation but most focus on the reduction of criminal offences through support and help from the community. The hope being that the offender will change their attitude toward what they have done and make them see that the behavior was wrong. This is where I feel there was a major problem with Pipers experience.

The entire time I was reading the book I was waiting for her to explain how sad she was that she had committed the crime or that she realized it was wrong. Instead of her saying these things, the only thing I heard was the fact that she thought it was ridiculous for her to be here for so long, or that most of the people in the camp didn’t deserve to be in for what they did. While she was locked up she was thinking and writing, but it was not about how she realized that what she had done was wrong, but instead it was how badly she missed everyone she loved. She did not mention the fact that she realized her wrong doing and that if she hadn’t had of done those things, so long ago, that she never would have been in this situation, instead she complained that her sentence was unfair and that she was a nice lady who didn’t deserve this. This is the problem I have with the criminal justice system now a days. It seems as if most of the ladies in the prison with Piper were doing the same thing, waiting to get out of jail.

These people are not thinking about what they did to get into these situations, trying to better themselves and getting prepared for the outside world. Instead it seemed as if they were only concerned with making their time in prison as nice as possible and in a sense trying to forget why they are there in the first place. They focused on making their time in prison more comfortable and finding out ways to get what they wanted while breaking the rules. I think that there are different reasons for this and they are not all the prisoners fault. One of the major problems was that while Danbury had some working programs, there were just not enough classrooms that were functional, or teachers, to be effective. Release back into the community is an important step that needs to be done in the right steps to succeed. On the other hand, in my opinion, the prisoner is in for doing something wrong and being punished. If they had not committed the crime they would not be taken away from their chances to be successful in the world. While it may seem tough, it is just another form of privileges being taken away, if they had not committed the crime it would never have happened.

So, in the end, Pipers stay was justified in my opinion and she had it coming to her in the end, you cannot expect to do something illegal and get away with it. I believe that throughout the book, while certain aspects of punishment were touched upon, not all were met. While she gave retribution (ten years later), and next time will defiantly be deterred, I’m not to sure how successful the rehabilitation part was or if the incapacitation was necessary. I do think that it is necessary to point out though that Pipers case is not how it is in a lot of cases due to the fact that she has a loving husband and strong family ties. In the end though, Piper had a life changing experience that will affect her for the rest of her life, from her experiences in prison to her work on the board of Women’s Prison Association.

Orange is the New Black The Story of Crime. (2016, Apr 02). Retrieved from https://studymoose.com/orange-is-the-new-black-the-story-of-crime-essay 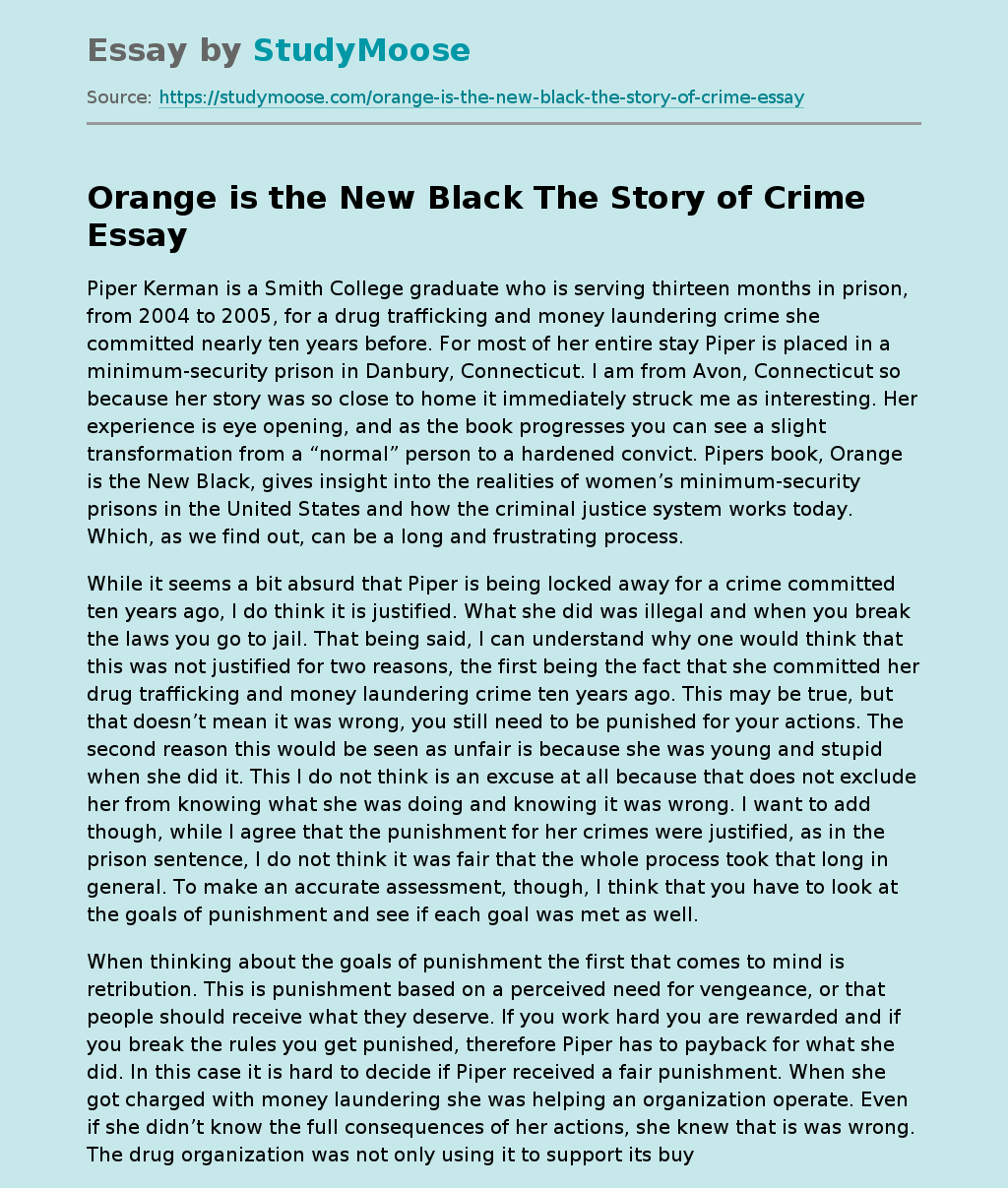