Opression in a Thousand Splendid Suns

Taslima Nasrin once said: “Those religions that are oppressive to women are also against democracy, human rights, and freedom of expression. ” This quote also applies to a book called a thousand splendid suns by Khaled hosseini and Deepa Metha’s Film Water. A thousand splendid suns in a book about two women in Afghanistan with an abusive husband. They struggle for survival and for their human rights that have been overlooked by the Taliban and a patriarchal society. Water is a movie about widows living in India.

Don't use plagiarized sources. Get your custom essay on
“ Opression in a Thousand Splendid Suns ”
Get custom paper
NEW! smart matching with writer

They are sent to the country side to live with other widows supposedly so they can live pure lives. In actuality they are cast aside and denied the basic respect all humans deserve. Ironically, the only way they can make enough money to survive is by committing acts as impure as it gets. They are forced to turn to prostitution. These two stories show that a cultural society’s refusal to change religious practices causes the oppression of women.

The characters Mariam, kalyani, and chuyia demonstrate this. Mariam is a woman living in Afghanistan from the book A Thousand Splendid Suns.

Mariam grew up very poor living in a small hut excluded from society. As a child she was taught only to endure and was never given the opportunity to stand up for herself. Mariam was the daughter of a maid that her father Jalil had an affair with and he was very ashamed of this. To solve this “problem” he got rid of her.

Jalil married her off to a much older man named Rasheed. Shortly after the start of their marriage, Rasheed rapes her. He justifies it with the Quran. “‘It’s what married people do. It’s what the prophet himself and his wives did.

There is no shame. ’” (Hosseini, 77). In this quote Rasheed refers to the prophet Muhammad in the Quran. This shows how Rasheed perverted the events Quran, the sacred Islamic text, to justify the rape of a young girl who hadn’t even turned 16. Marrying young girls still in their teens is an old custom that is embedded in Islam and the Afghan culture. Society’s refusal to change this practice caused the ruthless humiliation of a young girl and in the long run made the oppression of all women an accepted practice.

Kalyani is a character in the movie Water. She is a widow most likely in her 20s who never met her husband. Her husband died shortly after her marriage and was sent to the ashram as a young girl. Since she is the only young widow in the ashram she is forced to turn to prostitution to bring in extra money so the widows can at least have enough money for 1 meal a day. Her entire life story shows the subjugation of women. She was married at around the age of 10 because of religious traditions that have not changed in hundreds of years.

This tradition has given men the power to oppress women. This oppression is shown through the death of the husband. If the husband dies before the wife, the wife is sent away. If the opposite happen the husband is free to remarry as he pleases. This happens because of the religious belief that when a husband dies, half of the woman also dies. This makes it easier to mistreat women because it makes them seem less than human. It is also believed that the death of a husband is punishment for something done in a previous life.

Society’s refusal to change theses Hindi beliefs and practices create the oppression of women by making their mistreatment seem justified and by making them seem less than human. Chuyia is a young girl who was married at the age of 8 and was widowed the next day. She doesn’t even remember getting married but is forced to suffer the same fate as Kalyani. She is young and innocent and her innocence causes her to question practices that everyone else simply accepts. Deepa Metha uses this character to point out inconsistencies in the Hindi religion and traditional society.

At one point in the story she asks why there isn’t a place for men to go if they are widowed. She is quickly ridiculed by both men and women. This event shows that the refusal to change religious practices has brainwashed both men and women to accept and even endorse the oppression of women. Taslima Nasrin words are clearly tied to the theme of these two stories. She explains in her quote that a religion cannot be providing people basic rights if it discriminates against women. The theme reiterates the same message by declaring that religion can sometimes cause oppression of women.

These three characters show how traditions and old religious practices have made the oppression of women possible all over the world. By displaying this message in the authors’ books and movies, the authors hope to encourage all people around the world to not follow blindly old traditions and practices. They want people to decide for themselves what is right and what is wrong. When people fail to do this, bad things start happening such as the oppression, humiliation, and subjugation of women who are actually just as intelligent, strong, and able as any man.

Opression in a Thousand Splendid Suns. (2016, Sep 27). Retrieved from https://studymoose.com/opression-in-a-thousand-splendid-suns-essay 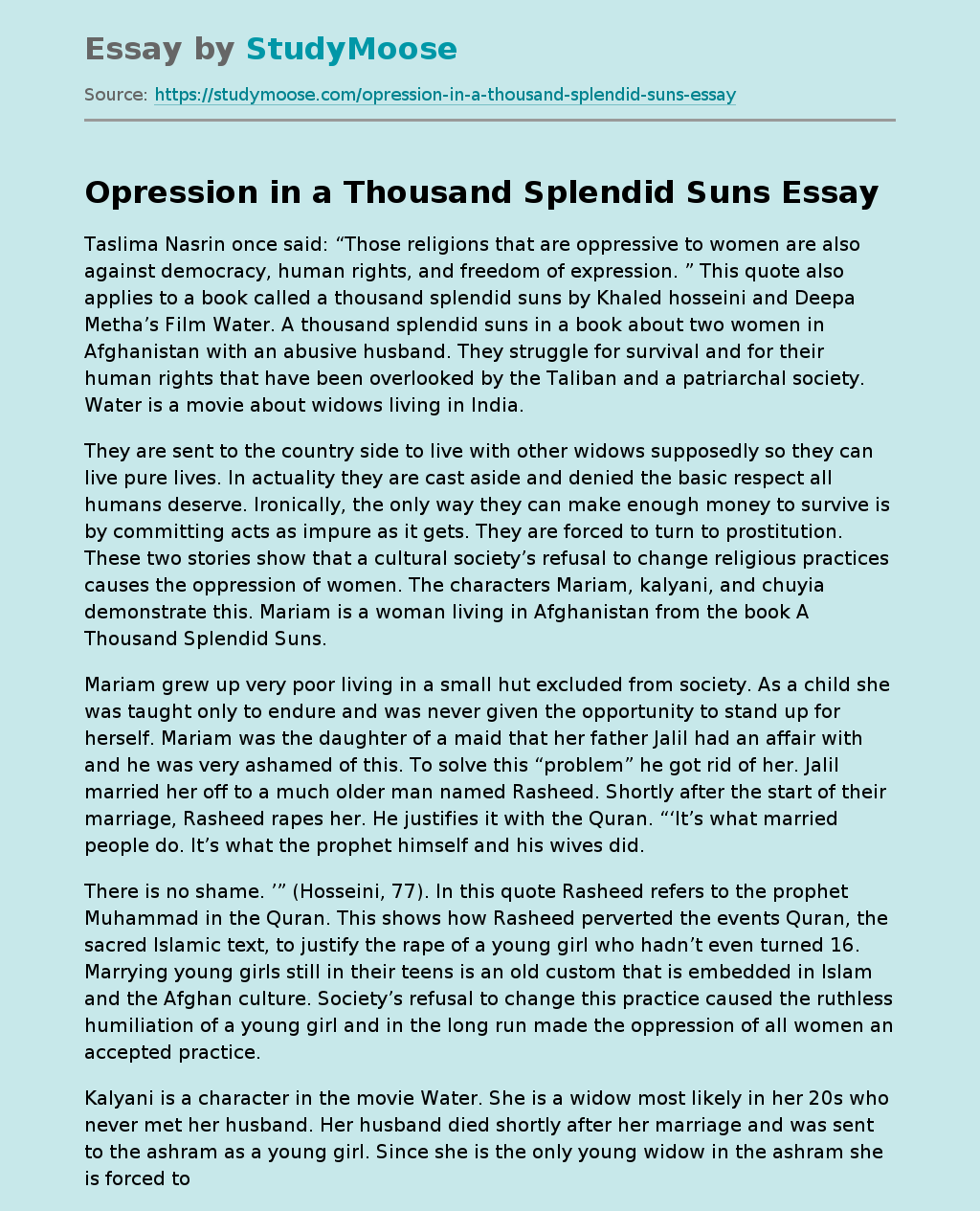