An examination of the themes of violence and oppression in Richard Wright’s autobiography, “Black Boy”

“Black Boy” An Oppressionist Impression “You are dead to me dead to christ!” In the following paragraphs, violence and oppression in Ch. 5 will discussed and analyzed through examination of Richard Wright’s – author of Black Boy (1945) – use of diction, tone, and metaphors. Were people of his time to read this book it’s probable that would understand, wheather they agree with the author’s point of view or not, the amount of violence and oppression witnessed by a boy his age.

Don't use plagiarized sources. Get your custom essay on
“ Oppression and Metaphorical Rhetoric in Black Boy ”
Get custom paper
NEW! smart matching with writer

Richard Wright, through the the use of the words his senses produced, brought his past into light for the children of the future. He allows his readers to feel as he did under the light of strong persecution with the use of an intimidating, heartfelt tone. “The cosmic images of dread were gone and the external world became a eality, quivering daily before me.

Instead of brooding and trying foolishly to pray, I could run and toam, mingle with the boys and girls, feel at home with people, share a little of life in common with others, satisfy my hunger to be and live.”

Waters 2 Wright fills the chapter with a calm and mesmorizing tone; like that of a preecher drawing his audience into a hymm. Omisdt violence, under anger and fear, Wright converses with the reader as though he were a youth leader telling a story to a group of boyscouts outside by a campfire.

His spellbounding words chant the reader into his world and produce a map through which the reader follows his life in the shadows of others. ” I mingled with the boys, hoping to pass unnoticed , but knowing that sooner or later I would be spotted for a newcomer. And trouble came quickly – a bloabk boy came bounding past me, thumping my hat to the ground and yelling.” To keep his audience from dazily drifting into a state of semi-consiousness, Wright interjects into his prayer with action in an excited and staggering tone. “A blow landed on the back of my head. I turned and saw a brick rolling away and I felt blood oozing down my back. I looked around and saw several brickbats scattered about. I scooped up and handful. The two boys backed away. I took aim as they circled me ; I made a motion as if to throw and one of the boys turned and ran. I let go with the brick and caught him in the middle of his back. He screamed.” By randomly shifting tone and using a variety of diction, Wright keeps his readers on edge.

In Ch. 5 Writght fluctuates word choice with action; when there is none his words express a valuable peace in hysteris. When action is not present Wright seems to speak in a peaceful voice that softens the reader to his pains. “… I was reserved with the boys and Waters 3 girls at school, seeking their company but never letting them guess how much I was being kept out of the world in which they lived, valuing their casual feiendships but hiding it, acutely self consious but covering it with a quick smile and a readt phrase.” When there was action; however, Wright made sure the reader knew; “I hesitated for a moment, then acted; I brushed the rock from my shoulder and ducked and grabbed him about the legs and dumped him to the ground. A volcano of screams erupted from the crowd. I jumped upon the fallen boy and started pounding him. Then I was jerked up. Another boy had begun to fight me .

My straw hat had been crushed and forgotton.” Without his use of diction, Wright’s metaphorical rhetoric would not stir the readers emotions as it does. In a combination with paralellism Wright uses metaphors against his audience to sway the intensity of their emotions in his direction. “There were hours when hunger would make me weak, would make me sway while walking, would make my heart give a sudden wild spurt of beating that would shake my body and make me breathless; but the happiness of being free would lift me beyond hunger, would enable me to discipline the sensations of my body to the extent that I could temporarily forget.”

Waters 4 To follow, Wright used metaphors in the dialogue of othercharacters, such as the grandmother when she said, “You left the church and you are on your own. You are with the world. You’re dead to me dead to christ.” With all of the language devices Wright used to express violence and oppression, many of them did not appear in dialogue. It, however, still possessed a strong force. “If you touch me, I’ll cut you, so help me. I am going to leave as soon as I can work and make a living. But as long as I’m here, you better not touch me…If you touch me when I’m sleeping, I’ll kill you.” Richard Wright was witness of as much violence and oppression in his early years as was there for any man of the time. His expierences as a young boy shaped him into the man and author he bacame. And through his writing, he shapes his readers with his words. “Suddenly the future loomed tangibly for me, as tangible as the future can loom for a black boy in Mississippi.” 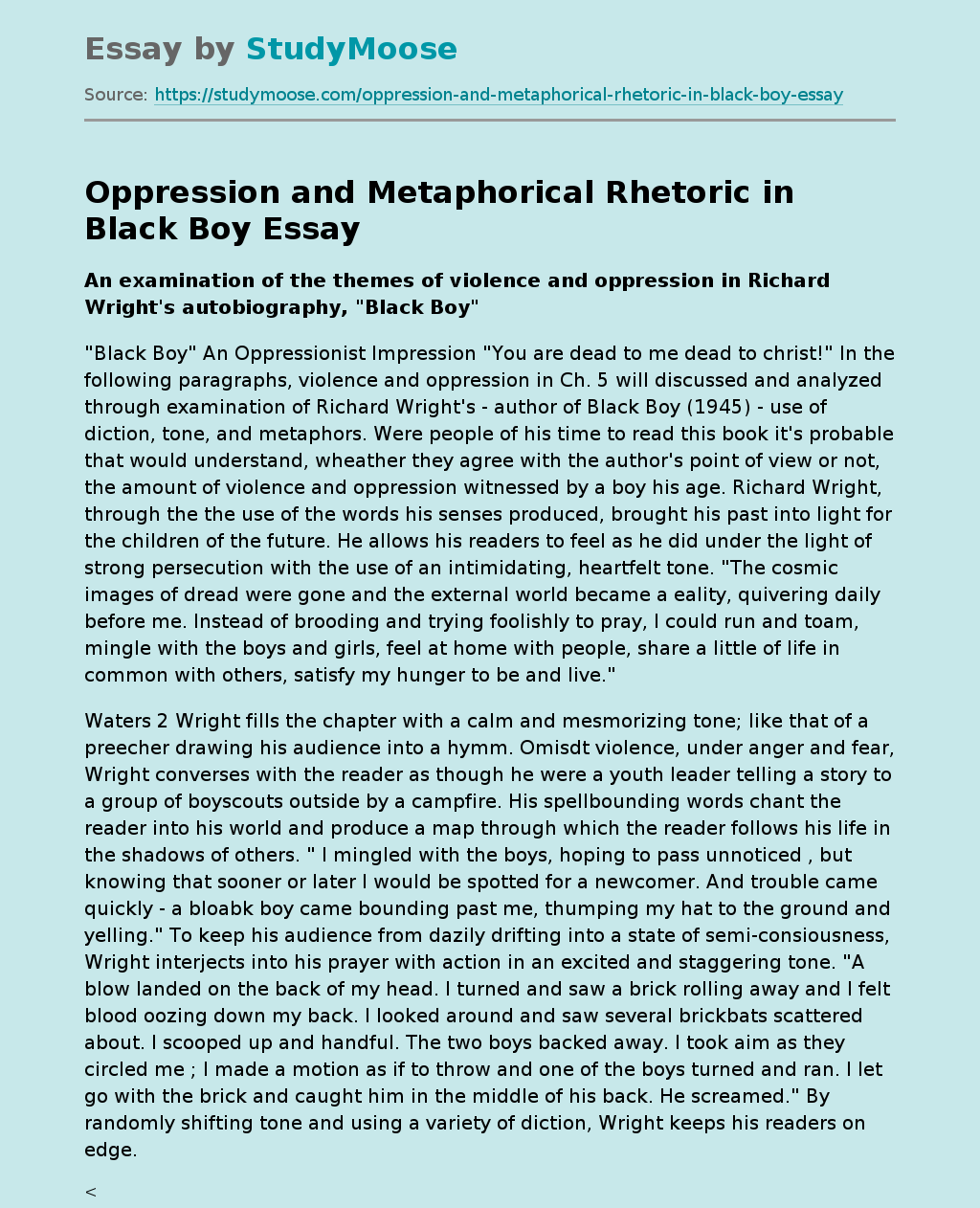