Margaret Atwood’s The Handmaid’s Tale delves well into the horrid nature of extreme control and immoral limitations in defining the corrupt theocratic government at large, and more specifically the effect this control has on the society’s women. In an age in which a newly emerged and merciless governmental system called the Republic of Gilead has “put life back to the middle ages,” sparked by a widespread panic of infertility, personal freedom and individuality have become unimaginably reduced (Genny 1).

Don't use plagiarized sources. Get your custom essay on
“ Oppressed Rights by the Oppressive Regime in Margaret Atwood’s the Handmaid’s Tale ”
Get custom paper
NEW! smart matching with writer

Handmaids selected to live in the houses of wealthy, well-respected couples go through a life entirely designed by the government for the sole purpose of bearing children. Caught between following the strict rules made for women by the Republic and breaking them in secret for the sake of her sanity, the protagonist Offred essentially but not purposefully offers close to nothing for her society’s benefit.

Not allowed to read, write, speak her thoughts or even look another in the eye, the most she can offer proves to be occasional, well-monitored grocery errands and the slight possibility of providing the gift of life for an elite Commander and his Wife.

Parallel to a dystopia in which Offred has been stripped of the most simplistic allowances, women in today’s various Middle Eastern societies find relatively equal difficulty in utilizing their strengths due to the severe suppression and forced structure of their daily lives.

Regardless of the varying context of these two scenarios, they both present themselves problematically in light of women’s personal struggle to contribute in society—in both Atwood’s The Handmaid’s Tale and the modern Middle East, seemingly unethical yet extreme theocratic government exercises examples of such radically unformed control over its people that the exploitation and demeaning of the natural rights of women become prevalent.

But on what grounds should the male citizens of the Republic of Gilead and those in today’s foreign communities be granted more liberation and opportunity while the women are held more captive of their own independence? As Offred finds herself trapped in such an unreasonably restrained living situation, she instinctively recognizes the current lack of available free will because she once knew what freedom looked and felt like.

For example, in opposition of her training as a handmaid with the Aunts, she cannot help but wander her ind back to the pre-Republic days “thousands of years before,” when she and fellow females could actually go to school and watch “movies of the rest of the world” that even included “dancing[,] singing, ceremonial masks, [and music],” clearly taking place in a land where “people…were happy” (Atwood 118). Offred as well as other handmaids in her place inevitably suffer within their reality by trying to maintain a grasp on the memories of such privileges they once took for granted, such as real television to promote quality education.

Instead of living the naturally liberal life of opportunity that was once available to Offred and existed in her home and school life, such a vision has been taken away by the government and exists now only in her memory, as the Aunts present to her and the other potential handmaids a government-approved film with “the title and [few] names blacked out…with a crayon so [they] couldn’t read them”—another example of a ludicrous constraint, reading, that could have instilled fruitful possibilities in the mind of a woman (Atwood 119).

In addition, as if the recollection of accredited education and other past events were not enough a cause of longing, Offred also recalls the fearless, empowering spirits of her late loved ones—particularly her mother whom she spots in the film, “wearing the kind of outfit Aunt Lydia told [the handmaids] was typical of Unwomen in those days” while “smiling, laughing…and raising [her] fists in the air” (Atwood 119).

To witness such a wild and free spirit in action, that once was allowed for women but has been officially banned by the radical Christian followings of the Republic of Gilead, undoubtedly sparks a deep temptation within handmaids to rebel against this authority inflicting such “unacceptable losses of intellectual liberty”; however, such a temptation proves to be a challenge to pursue for some women today (Tolan 1).

While the initial teachings of Islam attempted to improve living conditions for Muslim women by granting them some of the same rights as men in the seventh century, women become incapable of endorsing these rights when their society attempts to enforce the “laws” of the Islamic religion, described by the Columbia University professors who wrote At the Crossroads of the World: Women in the Middle East: Today, many Muslim women do not have the opportunity to enjoy rights once considered theirs by their religion.

Women may be unaware of their rights or live in societies where these rights have been misinterpreted or misrepresented by individuals in power (be it the state, culture, or family). In Muslim countries around the world, there is a fundamental difference between what is prescribed by religious texts and what is actually practiced, a gulf between the ideal and the real (Esposito 1998, xiii).

Often, the purportedly ‘religiously grounded’ restrictions placed on women within certain societies have little or nothing to do with the teachings of Islam. More often they are a function of socioeconomic and political factors. Recent examples of such restrictions included Taliban-controlled Afghanistan, which prohibited women from receiving medical attention from males and placed other restrictions on their movement in public (Revolutionary Association of the Women in Afghanistan)(Crocco, Pervez, and Katz 110).

At most, these women are granted with the illusion that they possess legitimate freedoms, when in actuality their government prohibits this execution with the false justification that it simply conforms to the Islamic religion. The handmaids and all women alike governed by the Republic of Gilead correspondingly must follow the rules of the regime that claims to be operating in the name of the Christian faith in an attempt to validate its restrictive essence.

Thus, no question exists as to how Offred becomes “increasingly reckless with her actions and behaviors,” or to why in the end “there is the strong possibility that her recklessness has cost her her life” (Genny 1). Most emphatically does Offred’s situation come off as unjust when she finally experiences a small taste of the natural freedom she once had but still deserves. Because it is obviously an “oasis of the forbidden,” she has to force herself to “hold…absolutely rigid” when the Commander invites her into his off-limits personal turf to play a game of Scrabble, something harmless, yet banned.

Despite “[t]he fact that [she’s] terrified,” Offred still recognizes that “this is freedom[;] an eyeblink of it,” as if “he were offering her drugs” (Atwood 138-139). While Atwood implies in her novel that “feminist utopianism cannot avoid the taint of totalitarianism,” she employs the concept of defiance in that Offred can nourish her natural tendencies to actually enjoy herself through breaking the rules (Tolan 30).

Similarly for the women in Iraq, the Ba’ath Party that emerged in 1963 sought provisions for women’s equality, including the liberties of education and employment; however, outside the major urban center of Baghdad, “the society still relegated Iraqi women to a very inferior position vis-a-vis men” (Brown and Romano 1). To maintain two adjacent communities with such contrasting ways of governing women is arguably contradicting and therefore, a cause for concern.

Ultimately, women have simplistically natural rights that ought not to be rendered in the least, especially by illegitimate theocratic governments. Under no circumstances are the rights to thought, decision, reading, and writing, among many others, capable of being outlawed justifiably, regardless of gender. With such liberties, women carry great potential in contributing to society, despite the possibility of infertility or radically religious devotion—and in a lot of cases, that contribution can be imperative.

Today in Iraq, a woman cannot own private property or hold any status, while forced to give up her education and marry a stranger. However, women still make up 65% percent of the population, and make up 70% of the agricultural workforce (Al-Jawaheri and Harris). Though they continue to fight for the equal rights and treatment they deserve while accepting their low circumstances, the crucial importance of granting women this moral blessing remains strong.

Oppressed Rights by the Oppressive Regime in Margaret Atwood's the Handmaid's Tale. (2017, Mar 09). Retrieved from https://studymoose.com/oppressed-rights-by-the-oppressive-regime-in-margaret-atwoods-the-handmaids-tale-essay 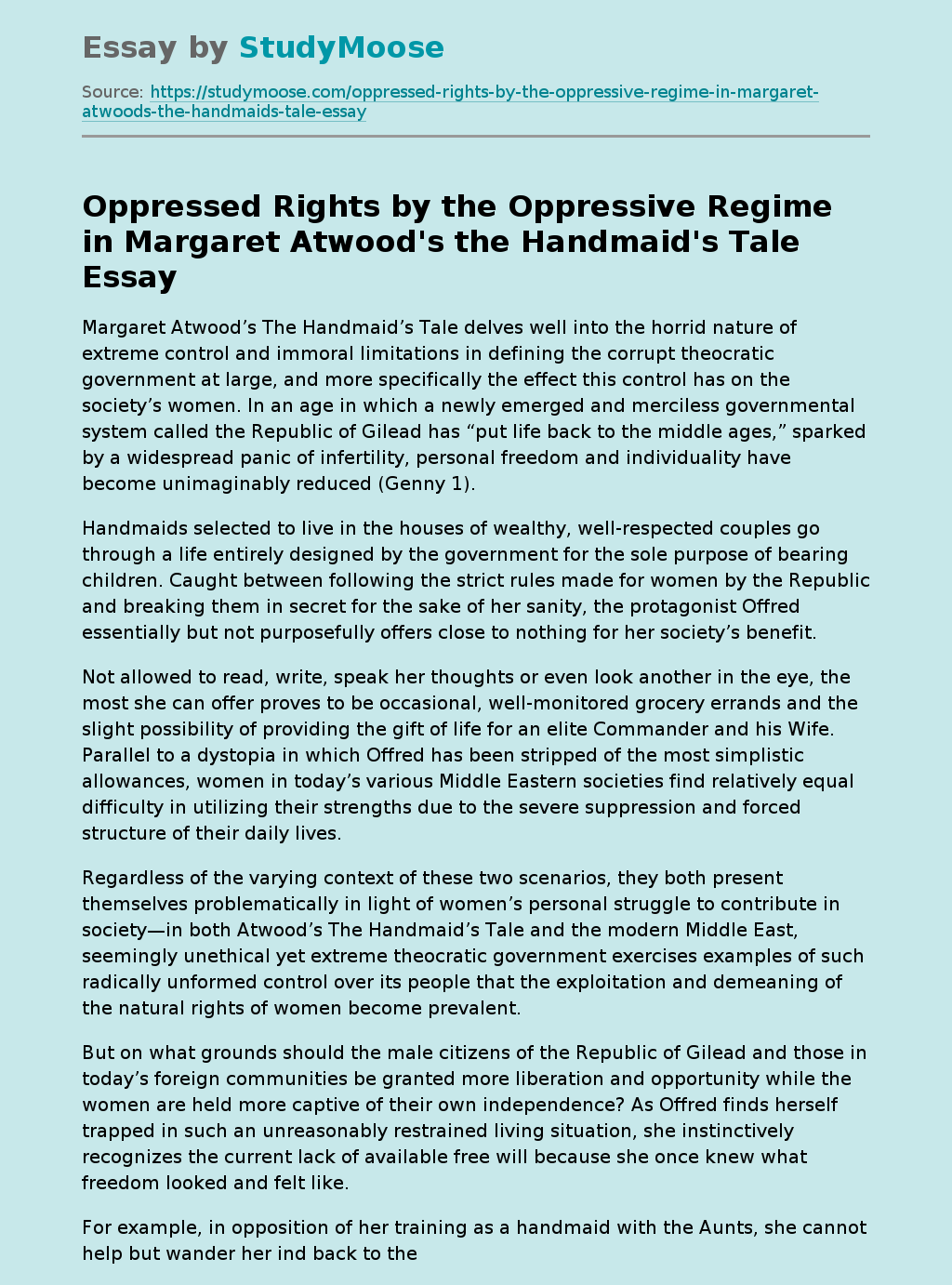