Many people cringe when they hear the words “arranged marriage”. They cringe because it brings to mind an image of a forced union and an unhappy couple in the middle of it. However, that is not always the case. Arranged marriages can be right and they do have positive effects.

The concept of arranged marriages today is totally different; they are no longer the same as they once were. In earlier generations there was no communication before the wedding day, now the parents allow their children to communicate through letters and occasional phone calls, before the day they meet and marry.

(Habib, K16) “More and more, parents give their children a choice in whether they agree to be with a potential spouse.” (Habib, K16) This is because “younger generations are wanting to take direction over their own choices and their own lives” (Habib, K16) and their parents see this and respect that.

Arranged marriages are able to last because “the integrity, values and belief system of the family guide them.

” (Habib, K16) “Ninety five per cent of all marriages in India are arranged. It’s believed they are more successful than marriages in the west (the divorce rate is as low as five per cent, a fraction of the rate in North America) because real love flows from a properly arranged marriage union between two people and romantic love does not necessarily lead to a good marriage and often fails once the passion dissipates.” (Habib, K16) Love is learned as the ties to the marriage partner grow.

Passionate love is a poor foundation on which to base a life-long partnership.

Stories in the media like the one of “Alpna Patel, a Saskatoon dentist found guilty recently of manslaughter in the stabbing death of her husband Viresh in Baltimore because she was in a joyless arranged marriage for less than a year” (Habib, K16) and of “one woman who reluctantly agreed to marry the son of a family friend in India, then committed suicide by drinking poison before the wedding because she was in love with another man and was afraid to tell her family” (Habib, K16) taint the image of arranged marriages. “Any marriage can become miserable and violent, regardless of whether couples are thrown together.” (Habib, K16) Arrange marriages are not about parents forcing their children into an unwanted marriage, there about the pairing two people with the same cultural, economic and religious backgrounds. 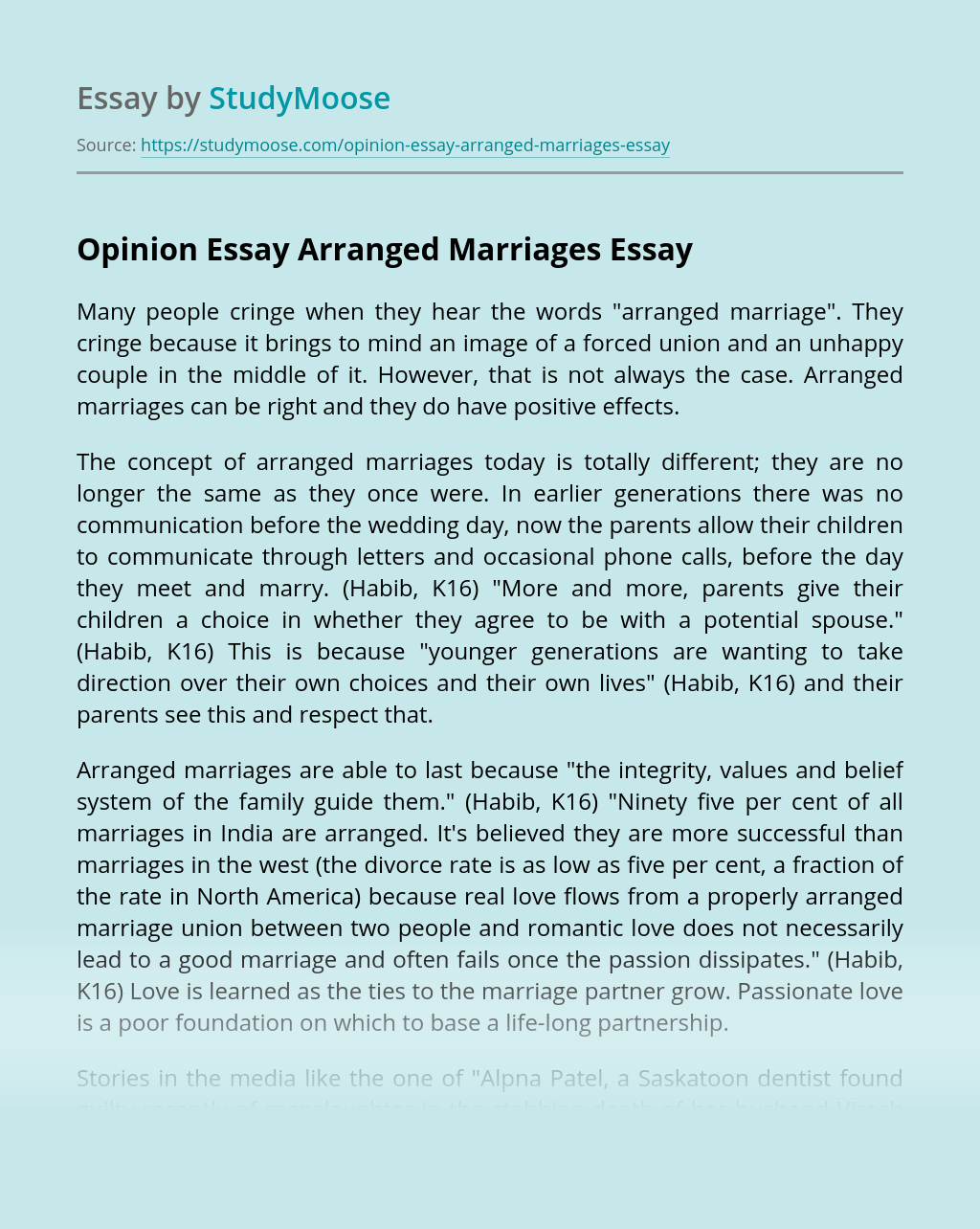