Romeo and Juliet is a well known play which was written by William Shakespeare. This play has become into a modernized film which makes it easier for the younger generation to adapt to, allowing them to freely understand the concept of Shakespeare’s language. The most recent version of this play is directed by ‘Baz Luhrmann’. ‘Baz Luhrmann’, has directed many other different types of films in the past, from Romance to action. Some of his most popular films are, ‘Strictly Ballroom’, ‘Moulin Rouge’, ‘Australia’ and of course his most popular film ‘Romeo and Juliet’.

Don't use plagiarized sources. Get your custom essay on
“ Opening Scenes of Luhrmann’s Film Romeo and Juliet ”
Get custom paper
NEW! smart matching with writer

The majority of his films revolve around the genre of romance.

However ‘Australia’ was not one of his Films that contained that particular theme and this resulted in his film not being accepted by his audience. Nevertheless, he has not lost the willpower and therefore he is working on a new film, which will begin in 2010. Music allows ‘Baz Luhrmann’ to exploit his emotions, and therefore the audience admires him regarding this matter.

Due to all his hard work and his excellent skills of creating stunning films, he has earned himself many awards, and has also been nominated several times.

At the beginning, the Montague’s are heading to the gas station. During their time at the Gas Station they clash with the Capulet Boys. When one of the Montague’s deliberately provokes one of their oppositions, conflict occurs. Due to the disruptive behavior, each ‘family’ decides to take out their ‘Swords’ (which is actually a gun) and therefore, due to that dispute, a quarrel occurs.

The main person from each ‘Family’ faces off, from the Montague’s side, ‘Benvolio Montague’ (Romeos Cousin) and Tybalt Capulet (Juliet’s Cousin). Unluckily for the Montague’s, one of their ‘Boy’s’ gets injured and so forth, they have to retreat allowing the ‘Capulet Boys’ to become victorious.

One of the important aspects of this scene is sound. When the scene is introduced, the audience are able to hear rock music being play from the Montague’s car, the sound of the music is very loud. Loud music indicates that the ‘Montague’s are not regular, ordinary people but are people that should not be messed with’. Not only that but you are able to hear parts of the lyrics from the song, ‘The boys, the boys’ the music signifies manliness, this also shows that they are attempting to be ‘gangsters’ or ‘bad boys’, they want to show that they are the real deal and that you should be aware of them. When the ‘Montague’s arrive at the Gas Station, the ‘Capulet’s’ begin revving the engine of their car, the sound of the engine signifies that trouble is cooking and the people within the car will encounter trouble. When the rivals begin to face off, the audience is able to hear a sound in the background that gets higher by the second, this slowly builds up tension, the ‘Montague’s’ are waiting and waiting for the ‘Capulet’s’ to do something horrendous, they wait and wait, and then suddenly one of the ‘Capulet’ members shouts out ‘BOO!’, then the tension dies down and everything seems to be fine.

But then an incident occurs and the two families have a dispute leading to a fight, when ‘Benvolio Montague’ arrives on the scene, he points a gun at the opposition, then the audience is able to hear ‘Western Music’, similar to cowboys. ‘Benvolio’ also refers to the term ‘Put up your swords’; this proves that ‘Baz Luhrmann’ tries to keep this film as traditional as possible. The moment where ‘Tybalt Capulet’ enters, everyone stops, and all the sound in the background dies down, there is total silence, and this increases tension. No body knows what will happen next. This part of the film is ‘nail biting’, everyone will be waiting to see, what happens. Then slowly one of the Capulet’s gets out his gun, but when he takes it out, you can hear the sound of a sword, the older version of this film used swords. Another time when Tybalt swings his gun ’round and round’ the sound in the background is like the sound of a cow boys rope swinging round and round. So when Tybalt and Benvolio enter, different types of music come on for each character highlighting their characteristics. Sound plays a key role in this film; it emphasizes many things and signifies many things too.

This specific film shows that Baz Luhrmann has tried to keep this film as traditional as possible. The Genre is still the same. The theme of Romance is also there but to make this ‘Shakespeare’ script easy to understand, ‘ Baz Luhrmann ‘ has changed it to a completely new film and made it as modern as possible but excluded the changing of the script.

Furthermore, the scene is suggesting that it is taking place at a Gas Station called ‘Phoenix’ because at the beginning of the scene ‘Phoenix’ is written on a big board identifying that it may be important. The word Phoenix emphasizes that a bird has risen up from the ashes. The Capulet’s and the Montague’s have risen from the ashes too.

In addition, there are many different camera angles used in this particular scene. Firstly, the ‘Capulet’s’ spurs are closed up on and the camera zooms into the shoes when they come out the car; this signifies that they are trying to make it look as if it is a westernized film as possible. A medium close up is taken of the two ‘Families badges’ each badge is shown to the audience so that it could be clearly identified, so which person represents which family. Before, they are about to fight, the camera goes BCU (big close up) to the teeth of the Capulet, he was wearing a grill, and on it, it said ‘sin’, this could suggest that he is a dangerous person who is most likely to commit a sin.

The camera angle quickly moved to the ‘Montague’s’ so that there reaction could be seen. After the ‘Capulet’s’ had humiliated the ‘Montague’s’ the ‘Capulet’s’ keep track of their opposition through the mirror on the car, this suggests ‘eye line view’. Soon after, Benvolio enters the scene with his gun, the camera shot zooms up to the gun, and on the gun it says ‘sword 9mm’, signifying that the swords in Romeo and Juliet are represented by guns. When Tybalt Capulet is introduce another BCU (Big Close Up) is taken of him so he could be recognized. During the fight between the ‘Montague’s’ and the ‘Capulet’s’, the camera angle changes rapidly and the camera tracks each characters movements. The angle of shots also move around in a ‘Arc’. The camera also zooms to the sign that says ‘Add more fuel to your fire’. This highlights that there will be a battle starting soon.

Sampson and Gregory (the ‘Montague’s’) at the start of the film look very confident, they look as if they are not scared of anyone, and they think themselves as ‘gangsters’, but when they encounter the ‘Capulet’s’ at the gas station, their mood totally changes, and they become unconfident and anxious. This shows that they are frightened of the Capulet’s. The Capulet’s look the part; they are wearing smart clothes, including trousers and a suit, on the other hand the ‘Montague’s’ look very unprepared and overconfident, they wear messy clothing and non-cautious. The Montague’s are wearing trousers, shirt and a vest (showing), it is how you will dress when you are staying at home or with your friends. This gives the ‘Capulet’s’ an advantage but also gives them a higher status. The ‘Montague’s’ do not look as smart as the Capulet’s. This signifies that they are more relaxed and not serious about anything.

When Tybalt enters, a close up of him is taken, and it is clear to distinguish his characteristics. He has a devilish look on his face, he has very long and pointy side burns, he also has a very small but pointy goatee, and all these characteristics make him look evil. Tybalt is holding a gun and is smiling. He looks calm and is wearing a jacket, which makes him look smart. It signifies that he is very confident than the others. He then shoots, with one handed, this suggests that he is showing off, that he can shoot with only one hand. He has a devilish look that suits his characteristics. The Capulet’s seem as if they are religious, because they are wearing the cross and ‘Tybalt’ has a picture of Jesus on his shirt, this can be clearly seen when he takes off his jacket rapidly. The sign which read ‘add more fuel to your fire’, this happens at the end of the scene when Tybalt drops a match stick on the floor and the fire catches the fuel and a flame emerges, turning the ‘Gas Station’ into flames.

Colors can mean a number of things. The color of the Montague’s car is yellow; the color yellow signifies cowardice, which they are cowards because they are scared of the Capulet’s. Another example is ‘yellow face’ which is not related to this film. The Montague’s are wearing black clothes; the color black signifies power and arrogance. In fact, they do act arrogant. As said before, there is a western theme played at the background, it also shows the rivalry between the two Families.

What I like about the opening scene, is that, it is self explanatory. Even if you do not understand Shakespeare’s language, it is very easy to understand what is going on, because ‘Baz Luhrmann’ has made this film so easy to understand. Also, many people do not like reading the old text of Romeo and Juliet, so this film is very simplified. However I think that the film is a bit too over dramatic and contains many different sounds, which is not needed, and can be a simple film. But I think many people like the modern version of Shakespeare rather than the older versions due to its great emotion and excellent directing by ‘Baz Luhrmann’. 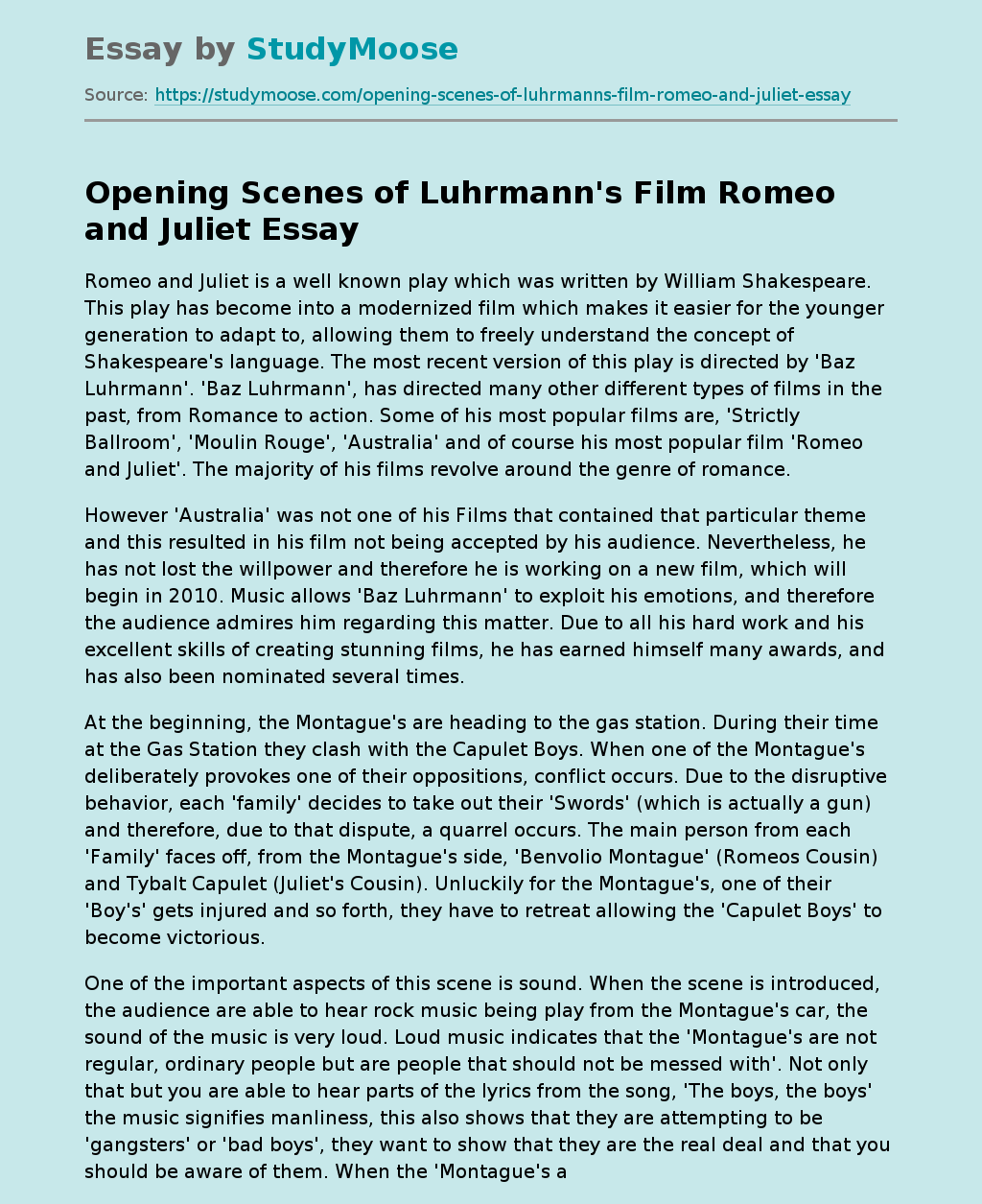