The opening Scenes of Dracula

Through out this scene there is music. The music in this play sounds spooky and unusual; this creates a strong tension though out the scene. The music builds up and down in certain places, the violin and cello add to the effect of the dramatic build up in this scene so if there is a dramatic part it is more likely that the music will be louder. At the beginning of the scene you have a view of the cross on the top of a huge dome falling and hitting the ground.

Don't use plagiarized sources. Get your custom essay on
“ The opening Scenes of Dracula ”
Get custom paper
NEW! smart matching with writer

As this happens a cloud of dust rises so high it reaches the top of the dome. Then Muslim’s sign appears on a rod and sweeps across a map heading to Romania this could show the fall of Christianity, which is under threat from the Muslim’s. The next thing that happens in the scene is that Dracula has to say goodbye to his wife Elizabetha: this is the part of the scene when you feel for Elizabtha as see does not no if Dracula is going to come back or not.

This is when Elizabetha gets upset because Dracula has to go to war and she might not see him ever again. At this point the doors swing open and Dracula’s men are there waiting there ready to go to war. I think this is a pivotal moment in the scene because if Dracula hadn’t gone to war Elizabetha would not have killed herself. In this scene the lighting is very effective; it disguises the identity of the unknown fighters.

This all works well with the red misty sky in the background.

At this point in the scene you can understand Elizabetha point of view, because the atmosphere is tense and the fear of not knowing what is going to happen. Even when you can not see their identity you can still tell who is Dracula is because of the facemask he is wearing this shows his authority. At the end of the battle you see Dracula, and all of a sudden he thinks that Elizabetha is in trouble and so he rushes off on his horse back to the castle.

As he arrives at the castle you see the best camera shot of the scene, this is of two guards opening the swinging doors. At the foot of the door stands Dracula in the dark he walks down the hallway and into the light and then you see his face. The camera angle changes so we can all see what Dracula is seeing. The camera angle keeps changing until we see the dead body of Elizabetha; this angle shows here body from Dracula point of view. By showing this angle it makes you feel how Dracula is feeling.

The opening Scenes of Dracula. (2020, Jun 02). Retrieved from http://studymoose.com/opening-scenes-dracula-8350-new-essay 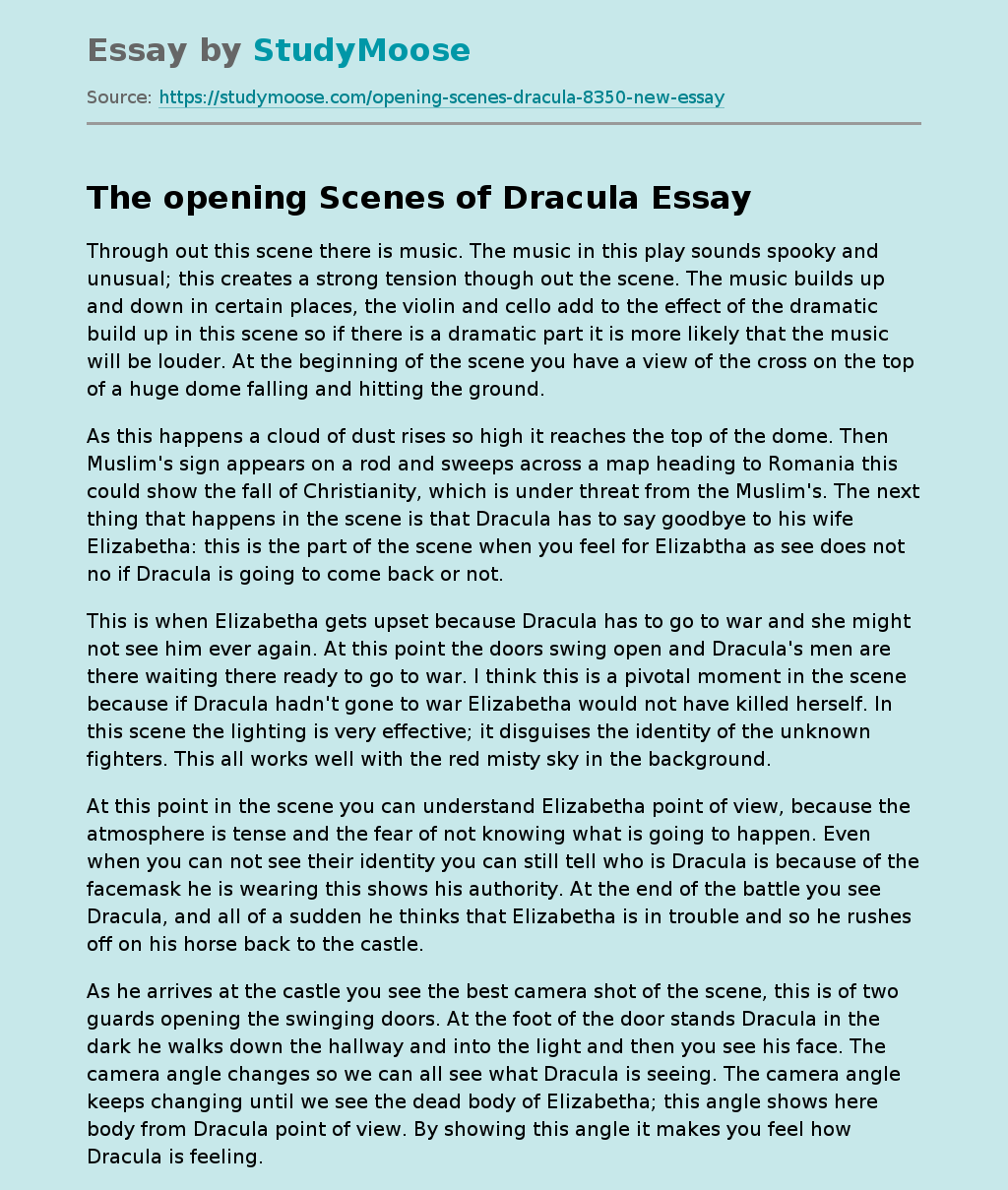