The author of the short story Only Ten hooks the reader in on the first couple sentences because of the mystery of The Shah and the way he describes him. He starts off the story with showing how difficult it can be for refugees to adapt and fit in in another country. As it shows in the orientation it is not uncommon for these people to have a hard time fitting in and opening up in the new place. This can happen to any person not just a refugee but it can be especially hard for them because of them being different.

Don't use plagiarized sources. Get your custom essay on
“ Only ten sort story annotation ”
Get custom paper
NEW! smart matching with writer

The author shows this by describing The Shah in a certain way that we use what we know of immigrants and apply it to him. Because of refugees being different they could be picked on and even attacked.

The author uses similes such as “Bruce leaped at The Shah with a wild yell, swinging his ruler above his head as if it was a sword” to show violence.

Later on it shows that not all countries are as fortunate as us in the way that The Shah was overjoyed that something was actually growing which is an example of the author using vocabulary. The author uses a technique called a metaphor to keep the readers interested. An example of this is when The Shah was playing footy he suddenly curled up like a ball to protect himself thinking that the ball was something other than a ball. Most probably being a bomb.

Showing that he has been around bombs before when they go off or seen the devastation of the aftermath of the bomb.

The author of the short story Only Ten is very creative in ways of saying what he wants to say. He leaves vague hints and little bit of evidence that throughout the story the reader has to piece together. Then the author offers a big bit of info at the end to provide a means to fully understand to hints and evidence scattered throughout the text. The title is a good choice as it refers to The Shah’s life as he had to become a child soldier and fight, get hurt and even kill people. The title refers to the fact that he is only ten. The setting is well chosen as it does actually happen a lot in real life and it is set up so throughout the story it is easy to give bits of evidence away. The main complication in the story is that The Shah is hesitant to reveal any information the author uses many techniques to show this one way is a series of short sentences to build suspense, foreshadowing and a few other techniques.

In my life I have met many people that come from other countries to live in Australia although none of them are refugees they still face some of the same problems that refugees face such as bullying and not being able to fit in well. Most of these problems were overcome by the victims just being so friendly that people found it hard to pick on them and still keep their reputation. The story is well written and very creative it hooks the reader in the first few sentences through the use of mystery. The story then goes on to build on that mystery and add suspense and tension throughout the story.

The author writes in a way that a reader can connect to the text on some level and even understand what the fictional characters are going through. Throughout the story he drops bits of evidence to keep the reader interested then right at the end drops the information that the readers have been trying to figure out leading to a very satisfying read.

Only ten sort story annotation. (2016, May 04). Retrieved from http://studymoose.com/only-ten-sort-story-annotation-essay 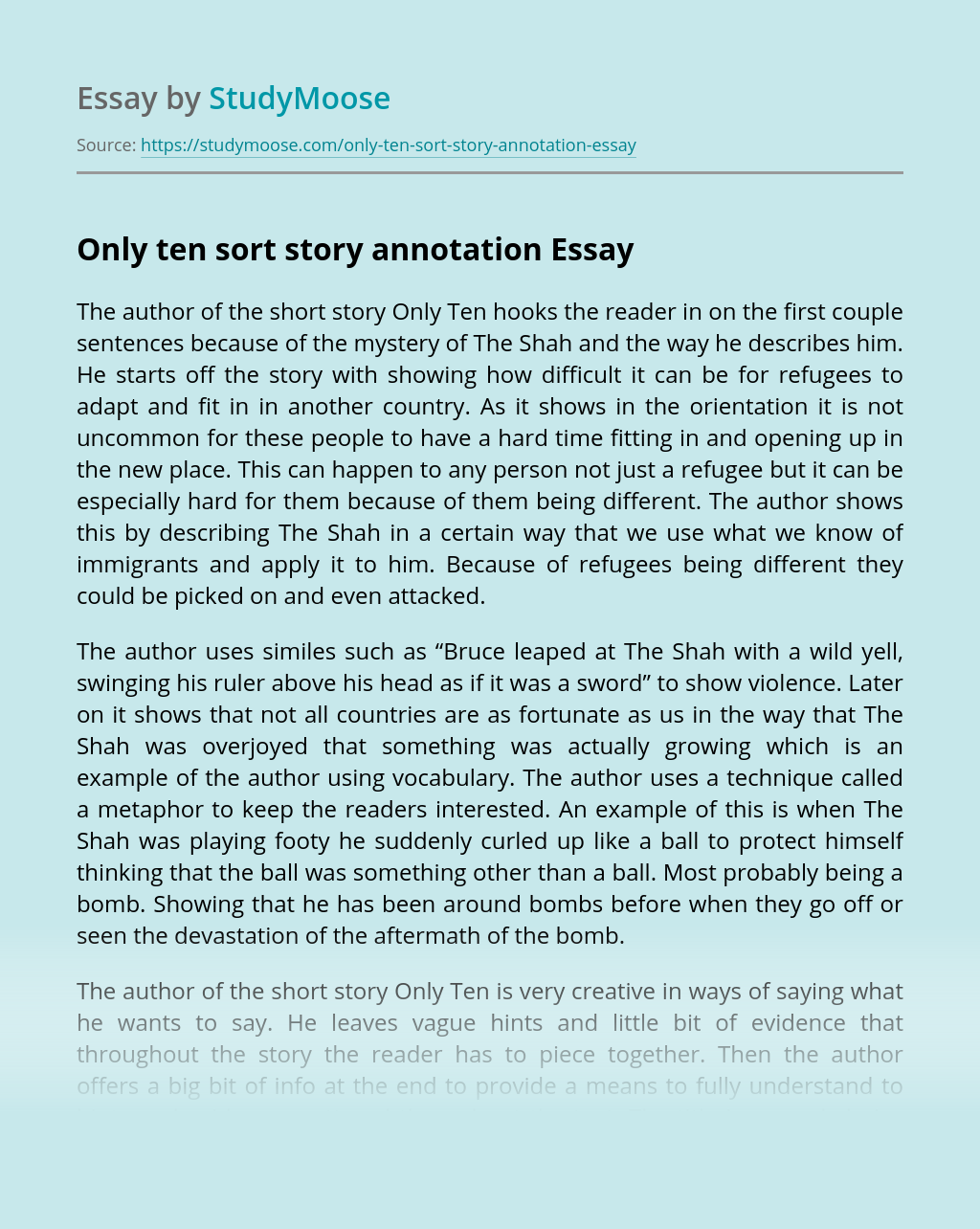