Only God can be the source of moral awareness

Moral awareness is sometimes referred to as the human conscience, it supposedly separates us from other animals and allows us to function as a society. A moral is a value that we live our lives by and each one contributes to a moral code of conduct which then becomes a country’s laws. This essay focuses on the ideas of Kant and Newman, who believed the source of moral awareness could potentially be God, and Freud and Russell whose views oppose religious ones.

Don't use plagiarized sources. Get your custom essay on
“ Only God can be the source of moral awareness ”
Get custom paper
NEW! smart matching with writer

Some key ideas used are the Moral Argument, Psychoanalytic theory of personality, and the Euthyphro Dilemma.

Kant’s understanding of moral awareness was that it consisted of universal moral laws that everyone knows of and are obligated to follow; these laws do not vary between cultures or throughout time. An example of an objective moral law would be that we shouldn’t commit murder. A moral action might be to help an elderly person across a busy road.

We would perform this moral action- or others- out of duty, obligation and reasoning. To discover the correct action to perform in a situation we apply moral reasoning- otherwise known as the categorical imperative. This is like a test that enables us to identify our moral duty. When deciding whether to lie or tell the truth, for instance, we consult the categorical imperative. These ideas helped Kant to formulate his Moral Argument for the existence of God.

Humans, he said, have a sense of innate moral awareness that burdens us with the obligation to be virtuous.

True virtue is logically rewarded with happiness, but we’re incapable of rewarding ourselves. He called the state in which virtue and happiness coincide the ‘summum bonum’, and the only way to ensure this state is reached is by the existence of a God. Summum Bonum can then be reached in a form of afterlife, explaining why we feel the constant pressure from our conscience to do the right thing, even when it won’t directly benefit us. Importantly though, Kant didn’t explicitly say that God was the source of moral awareness, but that human reason was and that this reason was provided by God. Cardinal John Henry Newman (1801-1890) had similar views on the source of moral awareness, he said: “We feel responsibility, are ashamed, are frightened at transgressing the voice of conscience, this implies that there is one to whom we are responsible.” By this he means that the existence of conscience implies that we are answerable to someone who provided moral laws, and that the law-giver is in all probability God.

On the other hand, Freud would disagree with Kant and Newman, because morals aren’t objective and consistent as they claim them to be. Freud noticed the differences in ethical values and actions, and attributed them to social conditioning. He said that the area of our mind- the superego contains the reasoning ability to make decisions, it’s our conscience. Freud said our conscience is shaped by people involved in our early developed- parents and teachers. These people pass on their moral values to us through socialisation, which is the process where we acquire a personal identity and learn values, social skills and behaviour from other in society. This version of the source of our conscience accounts for the subjective values seen in the people of the world and can be used as evidence against God as the source of moral awareness.

Another who felt God was an unsatisfactory explanation for the origin of moral awareness was Bertrand Russell. He reformulated Plato’s Euthyphro Dilemma, wherein Euthyphro is unable to solve the question of whether a thing is good because God commands it, or if God says something is good due to a quality it has? Euthyphro didn’t know what that quality could be. Russell presents the argument that either God isn’t good, or He’s not the most powerful being. God isn’t good if Divine Command Theory (morality is the revealed will and commands of God) is correct, as this would demean God’s goodness by making His most important quality power.

Also, by this logic, any immoral act could become moral if God was to say so- for example, murder would be acceptable if God said so, yet we would still know from our conscience that murder is wrong. The second problem is even worse for Christians to accept, as by definition God is the most powerful being. However, if He acknowledges a moral code superior to Him, that we must abide by, God wouldn’t be the Divine Being at all. This argument suggests that God is not the source of moral awareness and instead implies that either there is something superior to God where the moral code originated, or that conscience simply exists without an outside being’s intervention.

Only God can be the source of moral awareness. (2016, Apr 03). Retrieved from https://studymoose.com/only-god-can-be-the-source-of-moral-awareness-essay 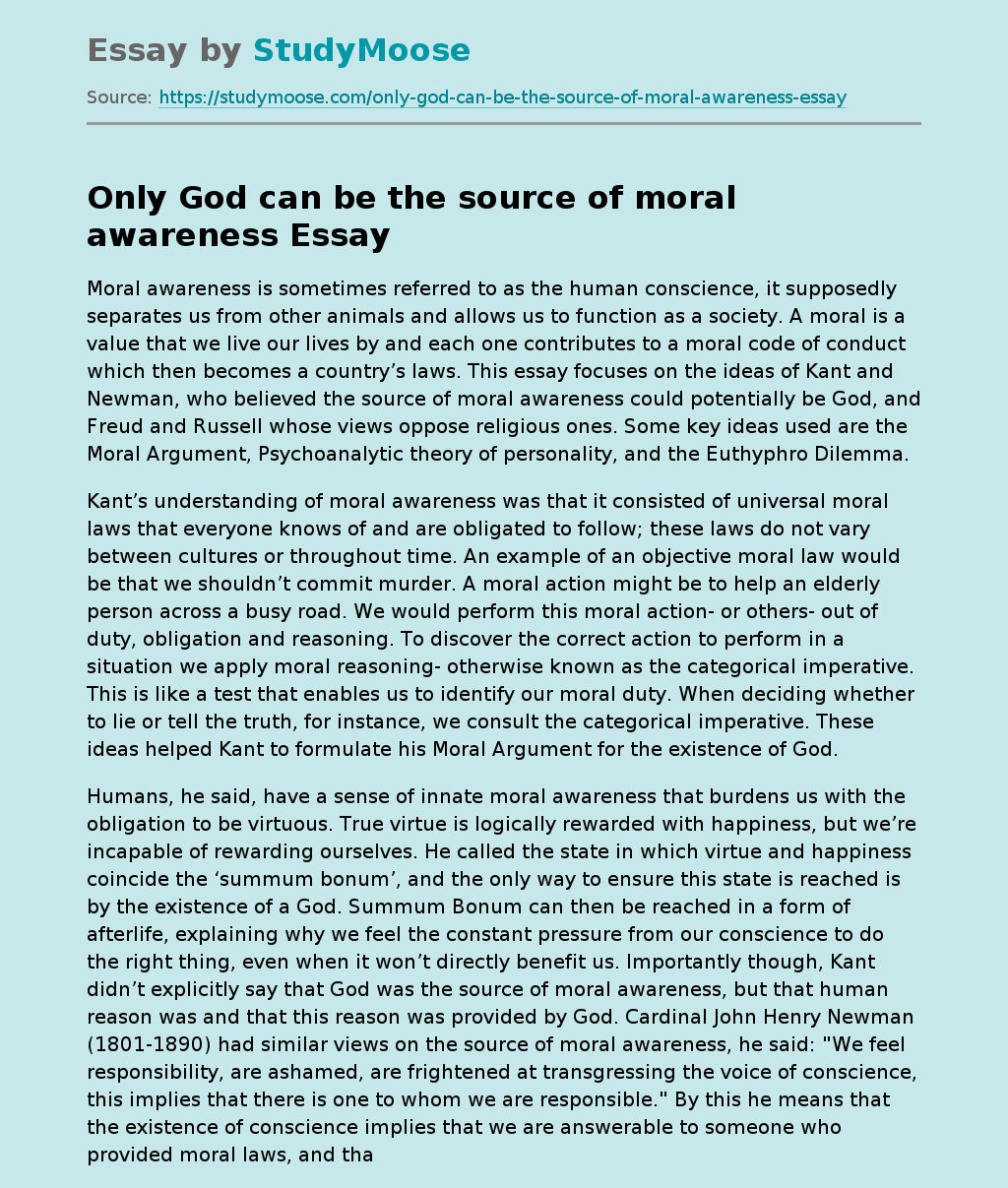