Don't use plagiarized sources.
Get Your Custom Essay on Online Enrollment System Just from $13,9/Page

An example of Information System is an Online Enrollment. It is a system that manages the processing of enrolling in a school/university. It might reduce errors and the processing time. It can have a great productivity and it can result into high quality product. In Information System, Online Enrollment System is all about interrelating different but interdependent transactions.

Most of the schools in our country today have their high-end technologies regarding to Online Enrollment System that may help them to lessen the burden of the staff, faculty and etc.

By logging on the internet, it may help everyone to access the internet easily. For college students, they can easily view their grades, records, fees and get subjects for the next semester.

Online Enrollment System is very useful for students. In the case of National College of Business and Arts, manual system is still being use. It has a manual encoding of subjects where students need to go to school and wait for a long time to encode their subjects. The registrar department is also using manual system of recording and retrieving information of the students.

In 1968, at the corner of R. Papa and Lepanto Streets, between the two giants in the Philippines private education (University of the East with its mammoth population of 65,000 And Far Eastern University with its 47,000 enrollment), a small building was erected to house a small school – National College of Business and Arts.

Its founder is the late Dr. Doroteo S. Pasion, a well-known educator (former Dean of Commerce of San Beda College, former CPA Review director of the University of the East, and former President of PSBA), lawyer, accountant, author and civic leader. Dr. Pasion launched NCBA as a public service, together with four others who believed in the NCBA concept: Col. Rafael Q. Yap-Diangco, Atty. Jose R. Torres.

Keeping its founder’s vision, NCBA has opted to remain as a specialized shoot and its growth measured and steady through the years. From that small edifice along R. Papa St., NCBA slowly expanded its academic programs and facilities with the single purpose of producing for the nation the type of educated manpower it needs for its development and well being.

This proponent of ours hopefully contributes to facilitate and improve the enrollment system in National College of Business and Arts.

The project looks at an Online Enrollment System. It stores details of students, subjects, year, section, schedules and grades. It may be also be use as an assessment for fees. The database is designed for use by staff and other authorized users to enable them to easily produce information required by the different people. 1.2 Purpose and Description

The project aims to develop and to design an online enrollment system for National College of Business and Arts that will allow the school’s file-handling, and generation of forms and documentation. It may also lessen the enrollment activities of a school.

The proposed online enrollment system covered the major processes in National College of Business and Arts namely registration of the current and incoming students, class scheduling, sectioning and showing of grades and assessment of fees.

The database limits on the following fields and functions:

One of the most significant steps in a research project is conducting the literature review. Through this chapter, the readers can familiarize the proponents. The related and previous studies presented in this chapter would give the readers and future researchers, an idea of the proposed system.

With its 25,000 students, Far Eastern University (FEU) ranks among the biggest universities in the country in terms of population. And with a large population comes multiple problems in enrollment, student records and related data. Wanting a lasting solution to the problem, FEU asked consultants for recommendations. The result was a decision to automate FEU’s enrollment system.

FEU decided to automate the enrollment system in two phases: (1), the development of a system for enrollment and student records for Phase I, and (2) the integration of the student’s financial records for. They worked closely with SQL*Wizard to pilot E*Wizard, an integrated system for student enrollment that contains modules with extensive inquiry and reporting capabilities. They also tapped FEU’s Computer Services Department to iron out kinks. They reviewed organizational structures, assigned people to support groups and asked faculty advisers and staff to train. She also met with the representatives of individual institutes and with the support of the academic managers and SQL*Wizard’s technical group, plotted the move to launch an integrated system during the second semester.

The preparation involved cleaning the database, standardizing labels for subject and preparing the subject requirements. (http://www.sqlwizard.com/ewizard_testimonial.html) The similarities that the proponents have encountered here is that the university formulated a powerful database that will hold large number of data and can keep track student transactions. This is one of the goals of the proposed system that the National College of Business and Arts Enrollment System will be developing.

Being at the forefront of the digital race prompted the University of the East to launch, this summer of 2008, its new web-based enrollment system, allowing students—upperclassmen, specifically— to enroll anytime anywhere, regardless of their location, thanks to the Internet. This latest in-house development makes technology more accessible to students, and also addresses and eradicates the “enrollment syndrome” of standing in line for hours just to encode subjects.

Faculty and students alike have expressed excitement about this latest development in the University’s enrollment process. During the pilot testing last March 14, 2008 at the 6th floor of the P.O. Domingo Center for Information Technology Building, one faculty member remarked, “We are very pleased with this new way of enrollment. This would certainly help the University uplift its image and draw more students to its fold.” The pilot testing was initiated to ensure the system’s efficiency, accuracy and receive feedback from users before the full-scale implementation.

Given the basic possibility that the web-based enrollment system may become overwhelmed and its efficiency affected during the peak of enrollment due to the increasing number of users, the University has gone a step ahead, well-equipped with all forms of technology and related equipment needed to support and sustain the performance of the new system. These include the 1000mbps fiber-optic gigabit connectivity, which generates higher bandwidth and ensures the reliability of the new system.

Another unique feature of the new system is the option to print a temporary registration card, which bears the selected subjects and schedules. This temporary registration card will be used later as reference for bank payments. On the other end, an enrollee may also opt to simply save the selected subjects and schedules so changes can still be made. An enrollee will be given two days as validity date before settling his or her account, which starts after saving his or her enrollment data.

For its initial implementation, the web-based enrollment system is open to upperclassmen with no outstanding accounts, no record of scholastic delinquencies and/or administrative case. It is also open to foreign students who have been given clearance by the Department of Registration and Records Management (DRRM) and the Office of Admissions after having complied with the requirements of the University and the Philippine government. Since all web-based applications are interrelated, students can check if they are officially enrolled after paying at any branch of Allied Bank and PNB nationwide, by visiting the UE website and logging in at the Student Portal under the “Academics” menu and clicking “Class Schedule.”

The new enrollment system is another in-house development of the University, which means that upgrades and improvements to it can easily be carried out when needed, thus making it flexible to meet the requirements of users. (http://www.ue.edu.ph/manila/uetoday/index.php?nav=19.htm&archive=200805)

The similarities that the proponents have encountered here is that the university is open to students with no outstanding accounts, no record of scholastic delinquencies and/or administrative case. This is one of the goals of the proposed system that the National College of Business and Arts Enrollment System will be developing.

Southern California community college Long Beach City College has gone live with a new Cognos-based enrollment management system that was designed by Irvine, CA-based professional services firm e2e Analytix. Prior to installing the new system, LBCC, which has two main campuses and multiple satellites that support nine schools and 34 departments, handled its enrollment via manual spreadsheets. With no reporting, continuity, or standard practices, and with lengthy error corrections, the school’s enrollment management budgeting and planning took up to three months to compile, consolidate, and implement.

The similarities that the proponents have encountered here is that the university provides flexible and powerful model development. This is one of the goals of the proposed system that the National College of Business and Arts Enrollment System will be developing.

You may also be interested in the following: foreign literature about enrollment system 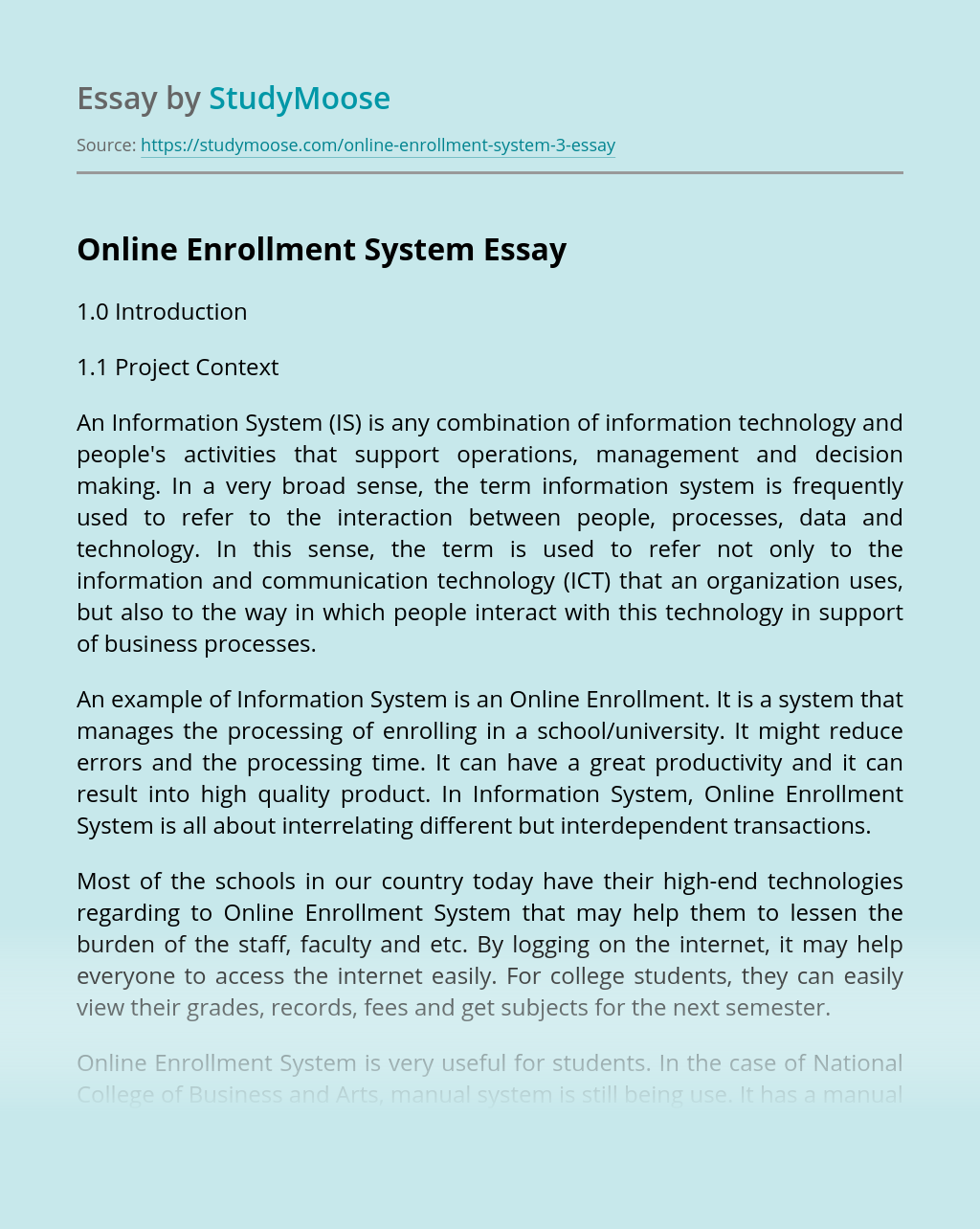