ABSTRACT
One of alarming problem that maybe encountered by our country next generations was the inadequate agricultural production, this all about the foods that is one of the primary needs of people. The increasing number of population here in the Philippines means more and more demands should be given/support.

A. BACKGROUND OF THE STUDY
There are a lot of new products that we can be benefited from ginger only through experimentation and investigation. We can use it as food seasoning in culinary dishes, used for preservatives and anti-septic properties, it can utilize as flavoring agent in beverages, and important constituent in cosmetics and performs product but most of all we choose Ginger: As an Organic Fungicide. As a Responsible students and citizen, we decided ginger as fungicide.

B. STATEMENTS OF THE PROBLEM

The use of chemical fungicide have advantages but more disadvantages, why? First, through the use of chemicals, our environment will be polluted. Chemicals also are harmful to our health; it may cause a sudden death in case of improper handling. That’s why we invented an organic fungicide, a safer and more effective one. * General Objectives we invented the onion as an organic fungicide because we want to increase the agricultural production of our country without harming our environment and harming our own health too.

As a youth and a student, giving importance to the country, we believed that using organic fungicide may bring success to the farmers and gardeners. If the whole world uses these fungicides, each of us can help in balancing the world. Avoiding of chemicals may lead to a brighter future, a future without environmental and health problems and a country with progress. D. SIGNIFICANCE OF STUDY

We, as investigators, believed that this investigation is very important because it may bring satisfaction to the agricultural (agencies/aspect) for having progressive harvests. It is also important because it serves as a way to encourage every one of us to love and take care of our environment while making our daily lives modern and easier. E.SCOPE AND LIMITATIONS

This research is all about an organic fungicide made from ginger. There are many farmers and gardeners now or organic fungicides in the country and many are convinced by their beneficial used. As natural Fungicides are preferred from natural products, application of these materials has less unfavorable impact on the environment than chemicals. They are now used widely is sustainable agricultural for the control of pest and diseases. F. DEFINITION OF TERMS

Preliminary research indicates that nine compounds found in ginger may bind to human serotonin receptors which may influence gastrointestinal function. Research conducted in vitro tests show that ginger extract might control the quantity of free radicals and the peroxidation of lipids. Preliminary studies involving the effect of ginger on nausea occurring with pregnancy suggest that intake of ginger may cause belching after ingestion In a 2010 study, daily consumption of ginger was shown to help ease muscle pain associated with exercise by 25%. Ginger root supplement has been identified in one study to help reduce colon inflammation markers such as PGE2, thus indicating a measure that might affect colon cancer. In limited studies, ginger was found to be more effective than placebo for treating nausea caused by seasickness, morning sickness and chemotherapy, although ginger was not found superior to placebo for pre-emptively treating post-operative nausea.

Other preliminary studies showed that ginger may affect arthritis pain or have blood thinning and cholesterol lowering properties, but these effects remain unconfirmed. Advanced glycation end uproducts are possibly associated in the development of diabetic cataract for which ginger was effective in preliminary studies, apparently by acting through antiglycating mechanisms. Zingerone may have activity against enterotoxigenic Escherichia coli in enterotoxin induced diarrhea. The characteristic odor and flavor of ginger is caused by a mixture of zingerone, shogaols and gingerols, volatile oils that compose one to three percent of the weight of fresh ginger. In laboratory animals, the gingerols increase the motility of the gastrointestinal tract and haveanalgesic, sedative, antipyretic and antibacterial properties Ginger oil has been shown to prevent skin cancer in mice and a study at the University of Michigan demonstrated that gingerols can kill ovarian cancer cells. [6]-gingerol (1-[4′-hydroxy-3′-methoxyphenyl]-5-hydroxy-3-decanone) is the major pungent principle of ginger. The chemo preventive potentials of [6]-gingerol present a promising future alternative to expensive and toxic therapeutic agents. Ginger contains up to three percent of a fragrant essential oil whose main constituents aresesquiterpenoids, with (-) zingiberene as the main component.

Smaller amounts of other sesquiterpenoids (β-sesquiphellandrene, bisabolene and farnesene) and a small monoterpenoid fraction (β-phelladrene, cineol, and citral) have also been identified. The pungent taste of ginger is due to nonvolatile phenylpropanoid-derived compounds, particularly gingerols and shogaols, which form from gingerols when ginger is dried or cooked. Zingerone is also produced from gingerols during this process; this compound is less pungent and has a spicy-sweet aroma. Ginger is also a minor chemical irritant, and because of this was used as a horse suppository by pre-World War I mounted regiments for feaguing. Ginger has a sialagogue action, stimulating the production of saliva, which makes swallowing easier. The traditional medical form of ginger historically was called Jamaica ginger; it was classified as a stimulant and carminative and used frequently for dyspepsia, gastroparesis, slow motility symptoms, constipation, and colic. It was also frequently employed to disguise the taste of medicines. Some studies indicate ginger may provide short-term relief of pregnancy-related nausea and vomiting. Studies are inconclusive about effects for other forms of nausea or in treating pain from rheumatoid arthritis, osteoarthritis, or joint and muscle injury. Side effects, mostly associated with powdered ginger, are gas, bloating, heartburn, and nausea.

Tea brewed from ginger is a common folk remedy for colds. Ginger ale and ginger beer are also drunk as stomach settlers in countries where the beverages are made. * In Burma, ginger and a local sweetener made from palm tree juice (htan nyat) are boiled together and taken to prevent the flu. * In China, ginger is included in several traditional preparations. A drink made with sliced ginger cooked in water with brown sugar or a cola is used as a folk medicine for the common cold. * “Ginger eggs” (scrambled eggs with finely diced ginger root) is a common home remedy for coughing. The Chinese also make a kind of dried ginger candy that is fermented in plum juice and sugared, which is also commonly consumed to suppress coughing. Ginger has also been historically used to treat inflammation, which several scientific studies support, though one arthritis trial showed ginger to be no better than a placebo or ibuprofen for treatment of osteoarthritis. * In Congo, ginger is crushed and mixed with mango tree sap to make tangawisi juice, which is considered a panacea. * In India, ginger is applied as a paste to the temples to relieve headache, and consumed when suffering from the common cold. Ginger with lemon and black salt is also used for nausea.

* In Indonesia, ginger (jahe in Indonesian) is used as a herbal preparation to reduce fatigue, reducing “winds” in the blood, prevent and cure rheumatism and control poor dietary habits * In Nepal, ginger is called aduwa, and is widely grown and used throughout the country as a spice for vegetables, used medically to treat cold and also sometimes used to flavor tea. * In the Philippines, ginger is known as luya and is used as a throat lozenge in traditional medicine to relieve sore throat. It is also brewed into a tea known as salabat. In the United States, ginger is used to prevent motion and morning sickness. It is recognized as safe by the Food and Drug Administration and is sold as an unregulated dietary supplement. Ginger water was also used to avoid heat cramps in the United States. * In Peru, ginger is sliced in hot water as an infusion for stomach aches as infusión de Kión. * In Japan it is purported to aid blood circulation scientific studies investigating these effects have been inconclusive.

CHAPTER III
METHODOLOGY
A.MATERIAL/EQUIPMENT:
* Clean ginger
* Chopping board
* Knife
* 1 liter soap water
* Bottles
* Sieve
B.TREATMENT/GENERAL PROCEDURES
1. Clean and wash ginger.
2. Chop/pound, extract the juice or liquid.
3. Filter the juice that was produced.
4. Get 4 teaspoons of juice or liquid and soak for one day and mix with 1
liter of soap water. 5. Bottles of stock solution ready as organic fungicide.
PROCEDURE USED
Making an organic fungicide is really easy. Here are the steps to be followed: 1. Collect fresh and mature ginger, select ginger that you think is juicy enough to be a fungicide. 2. Wash and clean the ginger.

CHAPTER IV
RESULTS
Using ginger as an organic fungicide brings success to the farmers and gardeners especially to the agricultural production of the country. You can see in the findings how effective and safe this fungicide. As a result also using this fungicide, we can harvest fresher plants especially the vegetables and fruits. We are sure that those plants are safe to eat because of the unused of chemicals. CONCLUSIONS

If this botanical fungicides will being known all over the country, all farmers and gardeners were be attract to used it, the environment will be contaminated of some poisonous fungicides and the agricultural production of our country will increased, so that we can secured the demands/needs of the community in the following years while preventing/ controlling the increase of pollutants here on earth. RECOMMENDATION/SUGGESTIONS:

We, investigators, want to control of chemical fungicides by the farmers/gardeners because it can pollute our mother earth. Instead of using chemicals, you just use an organic fungicide to prevent pollution. BIBLIOGRAPHY: 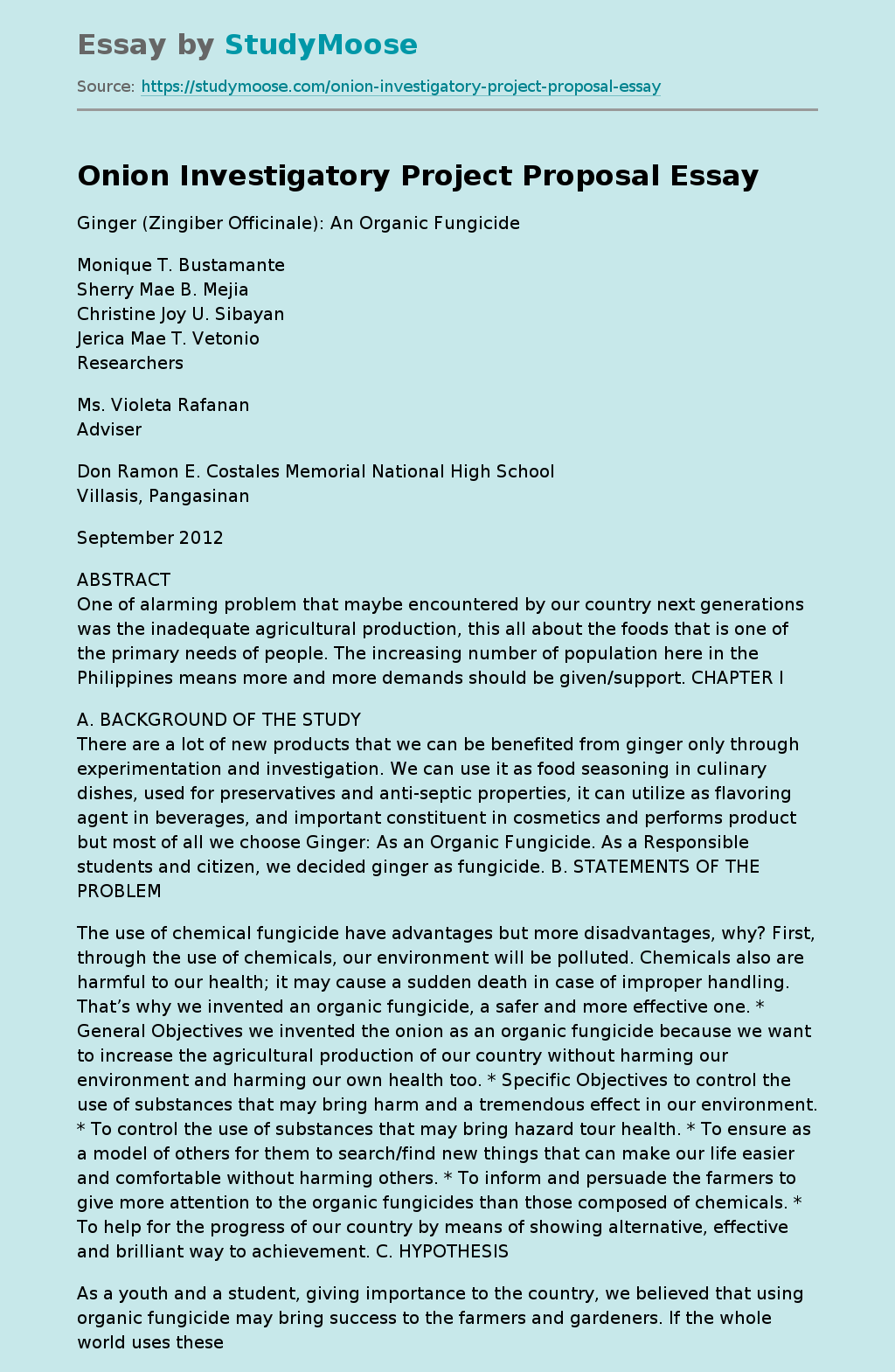