One of Proverbs And Sayings About Appearence

An individual has their one perception of how “normal” is supposed to look like.

Don't use plagiarized sources. Get your custom essay on
“ One of Proverbs And Sayings About Appearence ”
Get custom paper
NEW! smart matching with writer

These perceptions can come from a host of influences and sometimes are the thought pattern of a small group or community. That in particular is why it is very difficult to judge an individual according to their appearance. The way an individual may appear may look as if they are your normal everyday person, but how exactly do you know? Especially if they were brought up thinking that they are presenting themselves in accordance to the norm.

The truth is that appearances can be deceiving. In regards to what we see visually, an author states, “We all do it. We can’t help it. We’re predominantly visual creatures”, (Lickerman, 2012). When it comes to things we see, as humans we cannot help judge based on the appearance. Some people have baseless opinions on how a certain person should look rather than gaining an understanding of the individual as a whole. Our materialistic view of people misguides use and lowers our guards against individuals not out for our wellbeing.

In today’s society, we are told things such as thugs wear dark baggy clothing and successful individuals wear business casual attire. This is an example of a situation that can be deceiving if an individual takes advantage of our common misconceptions. In a situation in which a person is in the presence of a serial killer, this misconception can end in death. This discussion will explain how alternative identities, motives are the only way to understand an individual’s true identity.

A person should never judge a person by based on their appearance. Just because an individual appears to be a normal individual, it does not mean that they actually are. That person could very well be a serial killer. What we believe and want to believe in regards to friends, family, and even co-workers is something that all people deal with on a regular. We have an idea or a belief of what a person is and who they actually are, but how do we really know? How can an individual say that the person that we say we know is who they say they actually are? In truth, you don’t know. To you and me they could be exactly who they say they are, but in their own minds they may think they are someone else. They may live a lifestyle that a person who knows the individual never knew that they had. This is what it means to have an alternative identity and or lifestyle. When an individual has an alternative lifestyle, they live double life. For example, a man is married to a woman and has three kids with this very same woman, but takes monthly vacations or “work related vacations” to spend time with his girlfriend in another state. In the TV show “Dexter” and film, “Mr. Brooks”, both individuals had secret lives. They chose to keep their lives secret mainly because both lives that they had, but they know that both lives could not coexist with one another.

Both characters had real lives other than the life of a killer. Mr. Brooks has a successful business and Dexter is a very successful crime scene investigator. Even with such accolades, it would appear that what they are satisfied with their lives, but they are not. In most cases, a person may choose to have an alternate life due to lack of satisfaction of their current lives. In a statement above, there was an example used that described a married man with children choosing to take time to spend with his girlfriend from another state. In a situation like this, even though that man is married with children, he may not be receiving the satisfaction from his relationship with his immediate family. Like this individual, both Dexter and Mr. Brooks may be dealing with a similar situation in which their immediate lives are not providing the satisfaction that they desire. Mr. Brooks is a successful business man but does not get the joy and satisfaction that he receives from murdering that he in his company. Dexter is a successful crime scene investigator, but even though he enjoys his job he receive nowhere near the satisfaction that he receives when killing a bad individual. The reason behind living multiple lifestyles is an attempt by an individual to receive the satisfaction that they desire that they can’t receive in their other life.

One of the more recent real life situations America has faced in which a person sought out to kill others was the, “Navy Yard Shooter”. His name was Aaron Alexis. This was an individual who murdered 12 people at Washington’s Navy Yard. One of the reasons why this situation is still confusing to many people is because there was no clear motive of why he murdered those twelve individuals. According to a senior law enforcement official, ‘Co-workers have portrayed Alexis of having lived the mundane work life of a well-paid tech contractor given daily per diems that allowed a comfortable stay in an expensive city” (Pearson, 2013). Another person close to him described Alexis as very polite and a very friendly man. This individual is a friend and former housemate, Kristi Suthamtewakul. She noticed some personality changes in Alexis over the last few months, but she stated that it was nothing indicating potential violence. She noticed that he had been frustrated about pay and benefits issues after a one-month contracting stint in Japan last year. She also stated that, “That’s when I first started hearing statements about how he wanted to move out of America,” and that, “He was very frustrated with the government and how, as a veteran, he didn’t feel like he was getting treated right or fairly” (Pearson, 2013). Some will say why would something as insignificant as that lead someone to kill others? An author states, “No matter how heinous a crime, there is always a “justification” given by the perpetrator: “Voices told me to kill all those prostitutes”, “He was sleeping with my wife” and “I did it in the name of [insert deity here]” (Phillips, 2013).

The motive is what drives the serial killer to kill. If there isn’t a motive or reason why a person kills, why would they? In this situation, Aaron Alexis’s motive to kill those twelve people in the Navy shooter incident was due to frustration about pay and benefits issues after a one-month contracting stint in Japan last year and feeling like he wasn’t treated right or fairly as a veteran. In his mind, that was enough motivation to lead him to take the lives of the twelve individuals who he had murdered. In TV series, “Dexter”, Dexter had a motive to kill bad people. On a daily basis, he would investigate bad guys and provide his own version of punishment towards them. He served as both a vigilante and a serial killer. The lives of the innocent people that the bad people took away were enough motives for Dexter to kill those individuals in the same or similar type of way. Like stated above, there is always “justification” given by the perpetrator in why they may kill someone. The true identity of a serial killer is normally kept secret for a reason. There is a reason why a person would not want individuals to know exactly who they are. The reasons for which these individuals may not want to be known can vary. A person may want to be known. There is a possibility that a killer may not want to be known to others. That individual may not want to be known because they enjoy what they do. Both Dexter and Mr. Brooks hide their true identities mainly because they had individuals whom they loved and cared for in their normal life. Dexter had a sister and Mr. Brooks had a wife and a daughter. At the same time both Dexter and Mr. Brooks both have a desire and passion to kill others. Both have their different motives for why they kill but the both have a distinct passion to kill others. There may also be a possibility that along with killing others, they may also want to protect those individuals from being a potential target. The true identity of a killer solely depends on the motive of the killer. Regardless if a killer chooses to be known or not, the true identity of someone who kills and kills others frequently is that they are a serial killer. This is the main reason why an individual should never judge someone based on what they appear to be. The true identity of someone is the identity at which that person feels the most comfortable to be themselves. In the case of Dexter and Mr. Brooks, they both feel more like themselves when they kill others.

When you see some people, you want to think that you know exactly what type of person they are by just looking at them. It is difficult for anyone to know exactly whom they are in the presence of just by their appearance. A person may choose to have an alternative lifestyle due a lack of satisfaction in their lives. They may feel that what is present in their life isn’t fulfilling them with the fullness of life that they desire. Until they receive that fullness that they desire, they may continue to find that path by choosing to living different lifestyles. The motives behind which an individual would have to murder an individual can vary. If that individual has justification behind why they are performing such acts, in their eyes they may view what they are doing is the right approach to handle their situation. All a person needs is a motive behind why they may choose to kill an individual. In the case of Aaron Alexis, his motivation behind murder was the fact that he was frustrated about pay and benefits issues after a one-month contracting stint in Japan last year and frustrations with the government and how, as a veteran, he didn’t feel like he was getting treated right or fairly. The true identity of a person is the identity at which that individual feels the most comfortable. In that person’s skin, they may feel that what they are doing is justifiable. A person may choose to individuals during the Navy yard shooting incident hide their identity to keep those who are important safe from others. One should never make the choice to judge an individual based on how they appear. Understanding of individuals comes from taking time to actually understanding who and what a person actually are.

One of Proverbs And Sayings About Appearence. (2016, Feb 23). Retrieved from https://studymoose.com/one-of-proverbs-and-sayings-about-appearence-essay 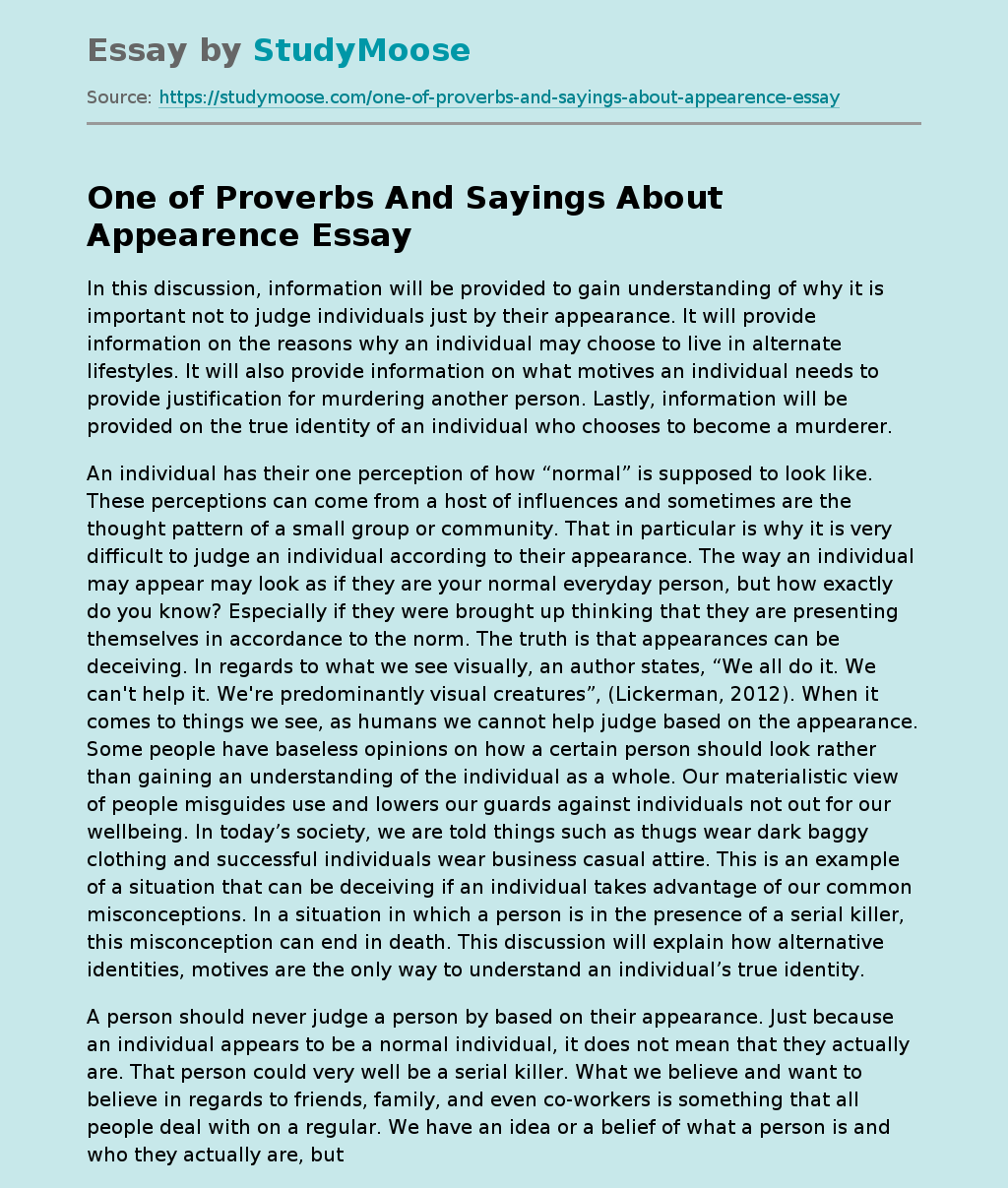