One Flew over the Cuckoo's Nest Book Review

One Flew over the Cuckoo’s Nest by Ken Kesey is a novel about a group of men in a mental institution. Nurse Ratched, the evil nurse who is in charge of their ward, controls these men. She does everything she can to make life miserable for them. To an outsider, the ward may look like a nice place to be, but in reality, it is not at all. The ward runs smoothly and is always in control but that is exactly why it is not a pleasant place for the patients to be.

Don't use plagiarized sources. Get your custom essay on
“ One Flew over the Cuckoo’s Nest Book Review ”
Get custom paper
NEW! smart matching with writer

They accept false happiness as well as being unaware of what is happening around them.

The EST, or electroshock treatment THERAPY, changes the men and with too much, they could become Vegetables. The nurse manages to keep them unaware by making the patients fear her. She does not allow anyone to be more powerful than her and eliminates anyone who tries to do just that. The ward is a dystopia for the patients because of the illusions of happiness and balance, ineffective shock treatment, and Nurse Ratched’s feared power over everyone.

The patients not only feel trapped, but they are also not happy on the inside. They do not allow themselves to have fun occasionally, nor does Nurse Ratched allow it.

McMurphy, the main character and newest patient, notices this and attempts to make jokes but no laughter comes out of it. “There is something strange about a place where the men won’t let themselves loose and laugh, something strange about the way they all knuckle under to that smiling flour-faced old mother there with the too-red lipstick and the too-big boobs” (49).

This is what Chief states after McMurphy attempts to make a joke to the group of men at one of the therapeutic meetings. It is as if, “the air is pressed in by the walls, too tight for laughing” (49) is what he follows with.

He is realizing that it is not a good environment if the patients are too scared to laugh or have fun. He is catching on to the fact that the staff keeps it that way by maintaining the chilling attitude towards the patients. The patients receive electroshock treatment as punishment the majority of the time but they are told it is to help them with their conditions. They believe that it is a good thing because that is what the staff has told them. McMurphy has not yet been to the “Shock Shop” and when he questions it Harding replies, “’You haven’t had the pleasure. Pity. An experience no human should be without. .. Those fortunate souls in there are being given a free trip to the moon’” (188). Harding, another patient in the ward and friend of McMurphy, believes that shock therapy is a good thing when really all they are doing is inducing a seizure. What he does not realize, that McMurphy does, is that all they are doing is shooting electricity through your body. That process is not good for your mind or body. Having too much EST can be dangerous and you can turn into a vegetable. This is exactly what happened to one patient named Ellis. He came in an “Acute” and now he is a “Chronic” because of the “Shock Shop”.

Chief’s hallucination is Ellis nailed to the wall, and the only time he is moved from that spot is when the black boys pull out the nails. “They pull the nails when it’s time to eat or time to drive him in to bed when they want him to move so’s I can mop the puddle where he stands. At the old place he stood so long in one spot the piss ate the floor and beams away from under him… ” (16). This is embarrassing for the patients because they are now incapable of living their everyday lives by themselves. They are forced to live as Vegetables and be fed, bathed, and moved everywhere.

They may not even want to live this way but they do not have a choice because they are unable to communicate to anyone that they would rather die. Ellis, for example, is forever stuck to the wall in the pose of crucifixion. Nurse Ratched’s power depends on her elimination of threatening forces that may rebel against her rules. McMurphy is a perfect example of something that may get in her way of having the ultimate power. “She don’t lose on her losses, but wins on yours. To beat her you don’t have to whip her two out of three or three out of five, but every time you meet” (113).

Nurse Ratched enjoys making the patients feel inferior and this is how she gains her power. She makes the patients feel like they will never be capable of beating her and this is how she is able to make them fear her. McMurphy attempts to be the one to beat Nurse Ratched at her game and he succeeds but not a sufficient number of times. Like Chief said, you must beat her every single time or she will win. In the end, Nurse Ratched eliminates McMurphy from the ward by taking him to the disturbed ward and giving him Shock Treatments.

The Shock Treatments, in the end, turns him into half-living human, who cannot do anything for himself. Nurse Ratched’s powerful personality creates a dystopia because she controls the patients and staff. She and her staff create illusions of happiness by making things look nice inside the ward. They give the patients Shock Treatment that is ineffective because with too much the patients become Vegetables. McMurphy attempts to overcome Nurse Ratched and her methods of control but ultimately fails. The patients are able to win a few battles, but Nurse Ratched wins the war.

One Flew over the Cuckoo's Nest Book Review. (2020, Jun 02). Retrieved from https://studymoose.com/one-flew-over-the-cuckoos-nest-book-review-2-essay 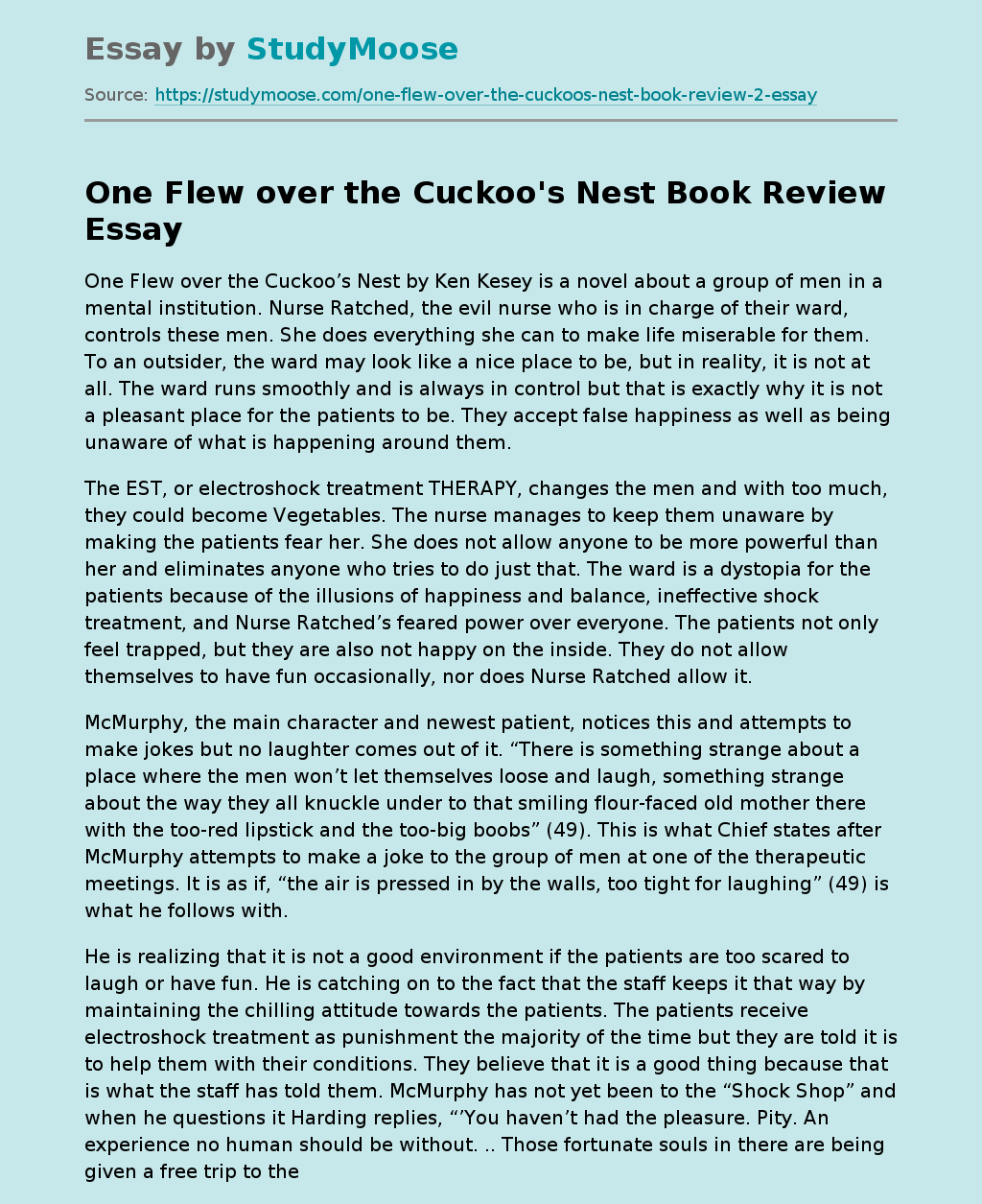